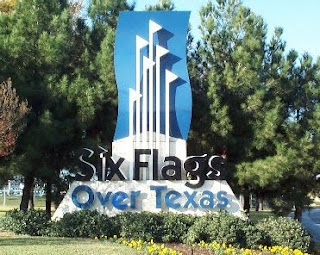 Six Flags Over Texas is an amusement park in Arlington, Texas. The name of the park refers to the six nations that have had a hand in governing Texas throughout its history: France, Spain, Mexico, The Republic of Texas, The Confederate States of America, and the United States of America.

The Republic of Texas was dissolved on December 29, 1845, making Texas the 28th state to join the Union (side note# 1: my dearest Florida was number 27, joining on March 3rd of the same year).
The last Confederate flag was lowered on November 6, 1865 (side note# 2: Florida and Texas had both been members...not their finest moment, to be sure).
France, Spain, Mexico, and the United States are all that remain of these six nations.
Today, sometime after 3pm, TJ and I will find out if we will be living in one of them...or in one of fifty-two other countries that were on the bid list.
In my childhood, I never thought much about where the park got its name. All I knew was that I enjoyed going there. I loved the shows; the rides; the music; the food; the characters.
In my post-collegiate years, I never thought much about the shared past between Texas and Florida. I just enjoyed living in Orlando. I loved the shows; the rides; the music; the food; the characters.
Today, the follies of my past weigh heavily on me. I've never been much for politics or history. A terrible faux pas, i know. One that I now realize I must remedy. The outcome of today's Flag Day Ceremony is very much unknown. What is almost guaranteed is that, of the 56 flags hanging over my head, the one that TJ holds today will not be that of the USA. Will I be happy? Will I be sad? Will I know enough about the country to even know which of those emotions I am supposed to feel?
TJ and I spent a good amount of time reviewing our options, paying special consideration to the pet import restrictions, the language requirements (TJ must learn a foreign language to gain tenure), inherent dangers of the post, and any sort of bonus pay involved (money = good). When the flag is handed to him today, we will know immediately where it fell on our list of preferences...but that doesn't mean that I even begin to have a grasp on the situation.
But you can bet that I'll be doing some heavy reading in the weeks to come.
Posted by Aaron at 9:08 AM