I cannot believe how many circuses blow through this town. It seems like you can't turn around without almost getting run down by a clown car. In fact, I think there are no less than two circuses in town right now, at least having the decency to play different parts of town.

Long-time readers may know of the calamity that was our last attempt at going to the circus, when we found out that Circo do Portugal was feeding stray dogs to their lions. Actually, I think the whole Internet knows of our calamity. For some reason, that post always trends as one of my most viewed. Bizarre...Hah. Notice how I linked to it, to generate more traffic? Yeah, I'm shameless like that. 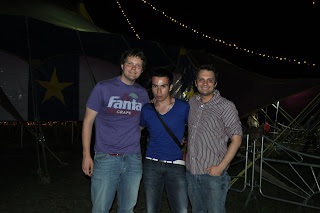 Anyway, our friend Sergio invited us to accompany him to the Atayde Circus last night, and I am happy to report that I did see stray dogs roaming the area, including the circus grounds, so I'm assuming that instead of dogs these lions eat baby seals or something as equally undomesticated. But I don't know. Sergio seemed to know when the show was gonna start, and I wasn't about to try and Google this place for more info. I learned my lesson the last time.

Now, having not been to the circus since, what, 1987 or so, I wasn't quite sure what to expect. A cursory glance at the circus grounds revealed a Big Top, several animal cages filled with moderately cheerful (or at least complacent) critters, and a bathroom that cost 10 pesos to use. I would have thought a number two might cost more, but it didn't. Anyway, the place looked okay, but not great.

And I'm not saying that we walked across the street to the liquor store and bought a six pack of Skyy Blue then snuck back into the car and guzzled it down before the show started...but it would certainly make for a more enjoyable circus. 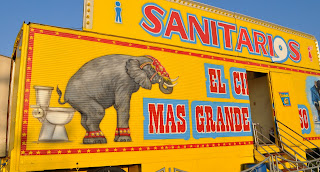 And, oh my, did we enjoy the circus. Not that that's a confession. But between us we did have to spend about 70 pesos in that damned bathroom before the night was over.

Prior to the show we walked around and oogled the caged animals. TJ even got to pet a bear. This wasn't exactly sanctioned by the staff, but hey, Yogi had shoved himself against the corner of the cage, and his head was facing the other direction, so what else was one to do?

"Smell my bear!" TJ proudly proclaimed, shoving his hand towards my face. Wrinkling my nose, I declined in a tone that indicated judgement for his foolish actions, while silently I was wishing that I, too, had gotten to pet the bear. I'm sorry to report that there is no photo of the petting in action. We're stupid, but not stupid enough to stick a hand in a bear cage and keep it their long enough to adjust the focus.

At the start of the show, using my best gringo Spanish, I asked an attendant "Puedo tomar fotos?" She said no, and repeated this unfortunate response when I asked "Y sin flash?"

Whatever. I took 'em anyway. Cuz that's how I roll.

The photos aren't great, but I guess we can't expect much when the flash can't be used (Something about distracting people and having them fall to their deaths, or maybe startling animals and having them eat somebody. Pssh. Like that's ever happened.) and the shots have to be taken on the down low.

The one thing I respectfully chose not to photograph was the five tigers squaring off against their trainer. They already looked like they wanted to eat him, and I didn't want to give them any more reason to do so. That, and the crew had erected a cage to protect the customers. Very considerate, as we were sitting in the front row (VIP, baby!) but it totally jacked with my camera angles.

I have some great memories from the evening though. The opening act was a beautiful aerial piece on the flying silks. And the aerialist was nice to look at, too. Same for the guy that did the balancing act. He totally shot a balloon with an arrow using just his feet. Though it took two attempts. I'm guessing that was to add to the suspense and is no real reflection on his mastery of said skill. The one thing that I'm not quite sure of is what all the animals in the cages outside were for. None of them appeared in the show...

..but Mickey and Minnie Mouse roamed around during intermission. I'm not entirely sure what they're doing down here in Mexico, but based on their disheveled appearance, I'm going to go out on a limb and say they've been having too much fun on vacation.

Or, we could take moment to discuss how normal it is in Mexico to find random Disney characters wandering around. It happened here and is common just about anywhere children are found en masse. Mexico knows where the money's at.

The three clowns were great, and unlike their painted faced brethren in the United States, these fellas talk. A lot. They were really funny, and their mannerisms would lead one to believe that perhaps they might bat for "the other team" in their day-to-day lives. You know. MY team. And one of them looked like he might have been just a tiny bit on the completely buff side underneath that ridiculous pants/suspenders combo. Whee! This isn't him. He's actually sitting under the box waiting to pull a prank on an audience member (The standard one-guy-can-lift-the-weight-but-another-can't gag.), but this is the best I've got. Sigh. 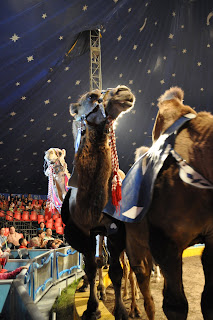 And, yep, as suspected, he was totally buff, as we found out when the other two got into a tug-o-war with him and ripped his clothes off, revealing a very flattering two-piece polkadot bikini. No photo of this, though. You see, I had just gotten busted five minutes before when I took the amazing camel photo you see to your left. I mean, what was I supposed to do? The damn things walked right up to us. The lights were on. The shot was clear. I knew I was gonna get busted, but so what?

And then I missed the beefcake. Damn.

Worse than that, I missed the elephant that came out for the grand finale. I LOVE elephants. And because I got camel happy , I missed it.

But Sergio didn't. I leaned over and said "Get your camera out and take a photo. Now!" And he did. I'm much too respectful to deliberately break the house rules twice. But I'm not above calling someone else to action.

What? Don't judge me. Fight the power!

Which reminds me. Where is Sergio with my elephant photo? Oh well, I guess this one will have to do... 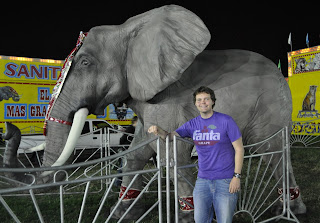 Email ThisBlogThis!Share to TwitterShare to FacebookShare to Pinterest
Labels: Circus