Welcome to the Pan American Games 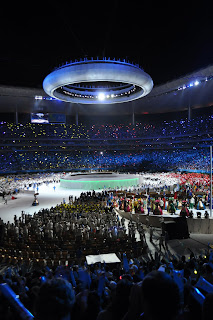 On our anniversary waaaay back in July I surprised TJ with tickets to the 2011 Pan American Games Opening Ceremonies hosted here in Guadalajara. We finally got to use those tickets on Friday night. Totally worth the wait.
If you're not familiar with the Pan American Games, let's just say that, for the Americas, they're the next best thing to the Olympics. There's a torch relay and everything. And you can't have a torch relay without there being a final destination for the torch in question. And that, of course, means there must be an opening ceremony. For the Guadalajara games, the ceremony was produced by FiveCurrents, the California-based company responsible for the 2002 Winer Olympics Opening Cermony in Salt Lake City, Utah. 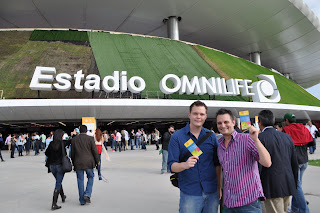 Not knowing what to expect in terms of traffic, we decided to head to Estadio Omnilife much earlier than one would normally intend. We had learned earlier in the day that there would be very little parking at the venue, so we opted for the Park-n-Ride option provided by a nearby mall. We arrived shortly after 5pm and quickly found ourselves lost in a sea of people. The organizers knew to expect crowds to arrive early and did a fantastic job providing entertainment (and beer!) to keep everyone occupied before the main event. There was an air show, food (and beer!) vendors, marketing ploys disguised as carnival games, and of course lots of Pan Am merchandise. 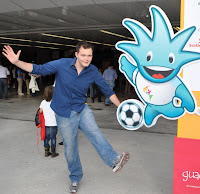 At 6:00 we headed into the stadium, grabbed some food (and beer!), and took our seats. We were pleased to find a gift bag waiting for us. Inside was a package of inflatable Aplaudidores (clappers), to be used during the Parade of Nations, and a flashlight. The game mascots headed out and did a little dancing to energize the early arrivals, and by 7:00 we were in rehearsal for the audience participation section of the show. Hence, the flashlights.
The Mascots

Huichi's giving Nomi Malone a run for her money.

The ceremonies began at 8:00 with the legendary Vicente Fernandez singing the Mexican National Anthem. Accompanying him was a mariachi band and an impressive demonstration of the Ballet Folklórico.

USA! USA!
The Parade of Nations followed, beginning with Argentina and presenting the 42 attending delegations in alphabetical order according to the Spanish alphabet. Mexico was of course the exception to the rule. Being the host country, the Mexican delegation entered last and was greeted by a standing ovation and thunderous applause. Just minutes earlier, TJ had been chastised by an

usher for standing up and cheering for the US delegation. In our section it was apparently only okay to stand and root for the home team. And in case you're wondering, yes, when Mexico entered, we stood and cheered with the best of 'em.
Maná burst into song following the parade, and for a brief moment the organizers lost control of the event as half of the Mexican delegation abandoned their seats in an effort to rush the stage. All was calm by the end of the segment and the show continued as scheduled.
Then came the aerialists, followed by a video montage of the torch relay. Mexican President Felipe Calderón said a few words prior to the raising of the Pan American flag, and before we knew it, it was our turn to perform. Following the cues of our section leaders, we put on a light spectacle unlike any I've seen before. Really, it's best to let the pictures and video do the talking.

Columbian singer and hottie Juanes (bottom, right...No, really. He's there. I promise.) took the stage as the light spectacle took on a life of its own, continuing beyond the choreographed segment.
As the festivities came to a close, the torch arrived, igniting a series of pyrotechnics above the open-air stadium.

Who thought that one tiny torch... 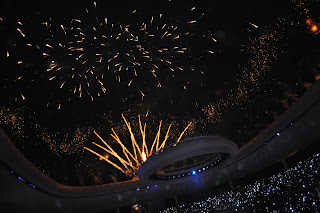 ...could cause all of that?
Alejandro Fernandez, son of Vicente, closed the ceremony with El Mismo Sol, the official song of the 2011 Pan American Games. The fireworks grand finale lit up the sky as images of Pan Am athletes were transposed upon the ceiling. 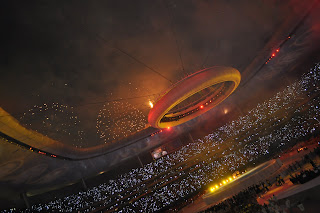 All in all, this has to be the most incredible thing I have ever seen in person. As for TJ, his Facebook status Saturday morning said the following:
"Night of the Panamerican Games Opening Ceremony...
The best night of my life. It was a childhood dream come true."
Yeah, I rock.
TJ and I have both been fans of the Olympics for as long as we can remember. TJ loves telling stories of how he would fake illness during his younger years so that he could stay home from school to watch the winter games. He even managed to attend an event or two for both the 1996 Summer and 2002 Winter Olympic Games
And me? My parents, long ago in what honestly feels like another lifetime, once promised to send me to Australia for the 2000 Summer Olympics in Sydney. I am sorry to say that it never happened.
But all is forgiven. My parents, famous for promising trips to Walt Disney World that never happened, thus inspiring my eventual move to Orlando, where I met TJ, who wanted to start a life in the Foreign Service, resulting in my move to Mexico, where I am at the very heart of the Pan American Games...well, I guess they got me to the games after all.
Posted by Aaron at 4:50 PM