There Goes the Neighborhood…

Well, folks…this is it.  My final blog about Guadalajara.  It’s been a great two years but Uncle Sam has told us that it’s time to move on.  I’d like to take a moment to reflect, and tell the story of  Providencia, the wonderful neighborhood that we have called home for the last two years.

Let’s start where Avenida Americas intersects with the beginning of Pablo Neruda.  Here, a bust of the street’s namesake greets pedestrians and motorists alike.  Neruda (1904-1973) was a Chilean poet, diplomat and politician.  He won the Nobel Prize for Literature in 1971.  He is mentioned in the lyrics to La Vie Boheme, one of my favorite songs from one of my favorite musicals, Rent.  A diplomat and a writer.  Huh.  Sounds appropriate for us, I'd say.

Beyond Mr. Neruda is a well maintained walking/jogging trail that contains a spattering of exercise stations and the recently added free Wi-Fi zones.

Along the way you will pass a series of eight sports themed sculptures that culminate in a ninth depicting the logo of the 2011 Pan American Games.  These sculptures, and the trail itself, were added in the months leading up to the games as part of a city-wide beautification project.

We were worried that, in a post-games Guadalajara, all of the hard work would be neglected and forgotten, but the trail has survived the dry season to remain as lush and vibrant as it was a year ago.  I hope that continues forever.  The games were a big deal for the city, and for us.  I cannot pass by one of these sculptures without remember the games.  Or our coworker Eugenia, whose strong endorsement landed me my first writing gig for the State Department, chronicling our efforts to prepare for the games in an article for State Magazine. 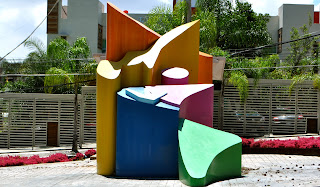 Continuing along to the intersection of Pablo Neruda and Acueducto, you will find this fountain, another creature birthed from the games.

Turn left on Acueducto and you will encounter the first in a series of origami sculptures that popped up a few months ago.  It’s a boat.  I suppose I could say that it reminds me of the two cruises we took while living here, but I’d just be looking for parallels where none are to be found.  Sometimes, a boat is just a boat.

You won’t be on Acueducto for long, as you’ll be making another left at Montevideo where you will quickly encounter an actual aqueduct.  One of TJ’s colleagues had an apartment overlooking this mammoth waterbearer, and it provided a nice backdrop for the going away party we shared with three other departing families a few weeks ago.  Now, those were some good tacos.  Sigh...


Continue along Montevideo’s walking trail and you will discover Parque Italia, a playground and dog park, sandwiched between two origami pups.  Osvaldo and I stopped here to work on his commercial last week.  We ran into my coworker Nena, who was chatting with a friend.  Nena’s a quirky gal that likes to mix beer and Coca-Cola.  Don’t knock it ‘til you’ve tried it folks.  I had one while writing this up (though Starbucks and a Caramel Macchiato are to thank for posting it) and it's actually quite refreshing.

Just beyond the park is a statue of Ghandi at the intersection of Montevideo and the previously explored Pablo Neruda.  I’m reminded of a much larger statue we saw during our trip to Mexico City with Vicente last year (though I don't believe a picture made the cut). 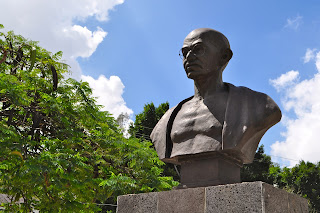 Across Pablo Neruda is our next origami sculpture, a bird followed by Jadin de Francia Charles de Gaulle.  It makes me think of all of our friends in Paris, especially Gwen, who made it over for a visit last year.  I hope to see Gwen and the others sometime during our tour in Jerusalem.

A little further down you’ll find the cutest of all:  a bunny!  This only reminds me of my childhood pet, which bit me hard and mysteriously disappeared shortly thereafter.

The Montevideo walking trail is not as elaborate as that of Pablo Neruda.  The trail is more rustic, featuring a dirt and woodchip path vs. the concrete found on Pablo Neruda.  I credit this to the fact that Montevideo cuts through a residential neighborhood while Pablo Neruda is bustling with businesses, banks, and restaurants.  The contrasts are spectacular.  One provides more of a vibrant, city backdrop while the other gives you more of a quiet outdoorsy environ.

If you follow the trail to it’s termination, you will find yourself at the intersection of Montevideo and Avenida Americas, just a few short blocks from where you started.

You’ll also find this final origami sculpture, which I suppose is appropriate since one of these is about to take us away from this wonderful place in the morning.

I took my photo-stroll down these avenues a few weeks ago, knowing that I’d be blogging about the area eventually.

Today while TJ battled what was either one final round of food poisoning, anxiety over our imminent departure, or quite possibly both, I took one final walk down memory lane, this time via Bosque Colomos, a park located within a short walking distance from our Guadalajara home. 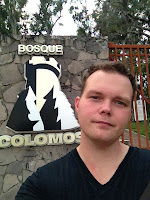 The park is a massive conservation effort encompassing several running trails (I frequented the 5k) that we would often spot coworkers on.  There are picnic areas, sculptures, ponds, and horseback riding stations.  On Sundays, when admission is free (5MXP Mon-Sat), there is a craft market where families sit together and paint figurines of Disney characters, sheep, the virgin Mary, and Santa Claus.

As I walked and reflected, I couldn’t help but think of my friend Esperanza, who on several occasions asked if I wanted to go to the park and take pictures with her.  I always said no, and that I only went to Colomos to run.  Yet here I was on my last day in Guadalajara, walking.  Walking, and wondering why I never took her up on that offer.   If you’re reading this, Espe, I’m sorry.

Near the entrance is a statue of Pepe Guizar, who composed the famous “Guadalajara” mariachi song.  On either side of him, lyrics from the song are carved.  Not one occurrence of hearing a mariachi perform passed without hearing this song.

To the statue’s left is a “castle,” which acts as a the park's cultural center offering a series of art classes for kids and adults of all ages and skill sets.

Descending the steps in front of the castle, you will quickly come across the park’s most beautiful feature, the Japanese Garden.  Filled with koi ponds, wooden bridges, and lush greenery, this park is a thriving oasis even during the dry season.  I’ve tried to bring every visitor we’ve had to this park, and this garden in particular.  I found myself feeling a bit emotional looking at it for what may be the very last time.  As I walked away, I though it to be a very good place to read a book, and wondered why I hadn’t done that before.  To my Guadalajara friends that are reading this, if you haven’t done so, grab a book and head to Colomos for me. 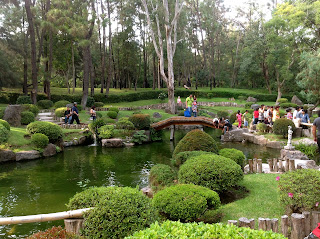 After the garden, I stuck to the running trails, as that was always the biggest draw for me.  I’d run before work, after work, and on weekends.  Until I wouldn’t.  Thanks to Colomos, I successfully gained and lost the same 10-15 pounds several times over the last two years.  I hope to find a park in the Metro DC area that will help me lose them and keep them off.  Of course, it was my fault, not the park’s…so I’ll just have to work harder.

Along the trail, I spotted a butterfly.  Beautiful creatures, and not something I see often in Colomos.  I see caterpillars all the time, though.  I see them crawling on trees, swinging from self-spun silk, and sitting unsuspectingly as birds hop around eagerly assessing the situation.

No matter what situation I find them in, I always hope that they’ll escape.  This one did, and I’d like to think it’s one that I had seen in its former, flightless existence.  That would certainly be a poetic closing statement, wouldn’t it?  Like the caterpillar that survives to start life anew as a beautiful butterfly, I have emerged from Guadalajara a different person than the one that arrived here two years ago, all the better for the experience.

Yes, we’ll go with that.

Thank you, Guadalajara.  Thank you, friends.  I love you all.  And I miss you already.