I've become quite the Groupon window shopper as of late.  It happened by accident when I found myself bored at work and perusing the app store on my iPad mini early last week.  I had never gotten into the fad because TJ always likes to tell me that the only thing cheaper than buying something you don't really need because it's on sale...is just not buying it at all.  He's got a point.  Don't tell him I said that. 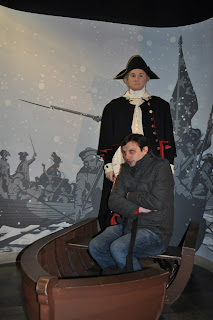 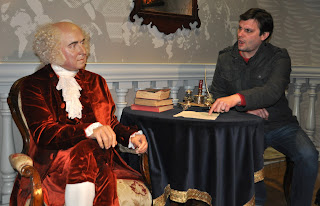 TJ freezes while crossing the Delaware with General George Washington,
then gets down to brass tacks with President John Adams.


The trouble is that between his eight + hours of Arabic class and my eight hour job plus two hour commute Monday - Friday (Oh, yeah.  I quit Arabic.  Remind me to tell you about that sometime!), we find ourselves exhausted and not eager to remove our carcasses from the couch most weekends.  Finding myself in a bit of a funk, my eyes lit up when the Groupon app popped up as a recommended download.  I resolved then and there that we would make more of an effort to enjoy our weekends...and do it on the cheap! 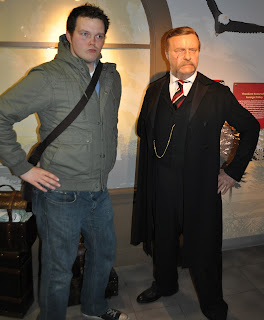 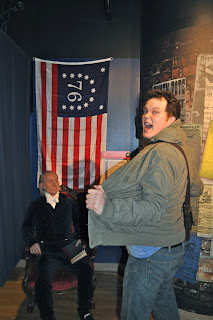 I go sass-for-sass with Teddy Roosevelt, then give John Quincy Adams a peep show
...he does not look amused. 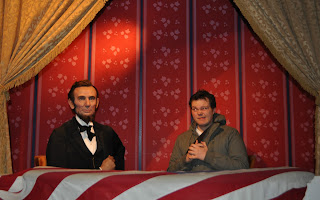 Using my birthday as the perfect excuse to make my first Groupon purchase, I selected two half-off admissions to Madame Tussauds for Saturday morning.  It's something I've always wanted to do here in D.C., but TJ has been reluctant.  I visited the New York location over Thanksgiving break during my (first) senior year in college and thoroughly enjoyed myself.  I was eager to see what this branch had to offer, but, when you live in a city with free museums galore, it's kind of hard to convince someone to pay for one.  Yay, Groupon!

The plan had been to spend the morning at Madame Tussauds followed by an afternoon walking amongst the Cherry Blossoms and capped off with dinner at our favorite restaurant, Texas de Brazil, which had sent me a buy one, get one free coupon in honor of my birthday.  Look at all of that BOGOing, folks!  We should be on Extreme Couponing!

Unfortunately, the cherry blossoms hadn't bloomed yet, despite multiple websites informing me that this was supposed to be the beginning of the peak time.  Whatevs.  We'll go next weekend.  Then I realized that the coupon for Texas de Brazil was only good Sun-Fri.  Now, we could have gone and paid full price, but it's the principle of the matter, folks.  I'm gonna save that puppy for another day. 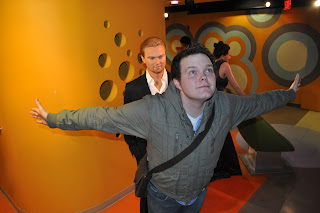 We're adaptable guys, so adjustments were quickly made.  In the end, our day consisted of  Madame Tussauds, lunchtime appetizers and mojitos at the Hard Rock Cafe (Which I effin' LOVE, by the way.  I think that anybody that says they don't like the HRC either hasn't tasted the food or simply doesn't like the concept of such a place.  Haters.), and a delicious home cooked Italian dinner accompanied by wine and Wreck-it-Ralph.  Yeah.  I can dig it.  I thought it was a pretty awesome day, all told. 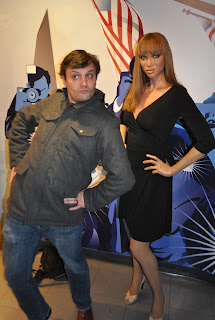