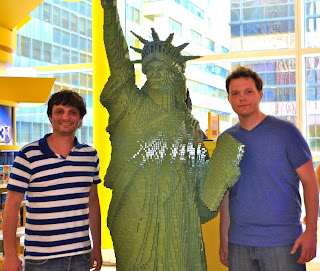 In the spring of 2006, during the days when neither of us had yet to achieve the covetous Monday-Friday, 9-5 career track that is all the rage, I found myself bored at home sitting in front of my desktop computer around 10:00AM some weekday morning while TJ was at work or in class, pondering Madonna's then upcoming Confessions tour and whether or not I could justify plopping down the cash for a couple of tickets to the Miami show.  When I clicked the link, I was advised that there were no tickets available.  Hmmph!  Casual ponderance turned to insatiable desire in the blink of an eye.  Now that I couldn't have the tickets that just moments before I wasn't even certain I wanted, I absolutely needed them.  Figuring that if Miami was sold out, surely the NYC tickets would be gone as well, I halfheartedly changed cities and clicked "Find Tickets."  Oh.  Oh, my.  They were available.  I hastily placed my order before better sense could prevail.  After I received my confirmation of purchase, I glanced at the clock.  It was now 10:02.  My mind flashed back to some forgotten knowledge that tickets would be going on sale at 10:00.  Knowing the answer, I checked Miami again anyway.  Yup.  Tickets were available.  Oops.  I called TJ shortly thereafter and we had a conversation that started vaguely like "Um, baby, you've always wanted to go to New York, riiiiggghhht?"  That July, we hopped on a plane to NYC and had a wonderful weekend filled with concerts (Confessions), on- and off-Broadway shows (Altar Boyz, Avenue Q, Mamma Mia!, Rent, The Wedding Singer), and your standard sightseeing walkabouts (5th Avenue, 30 Rockefeller Plaza, Central Park, FAO Schwarz, NBC Studio Tour, Times Square, etc).

Over the years we have consistently found ourselves returning to favorite vacation spots (Key West, 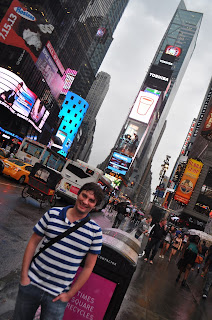 New Orleans, Paris, Puerto Vallarta) in lieu of exploring new ground.  Yet a return to New York, somehow, eluded us for years, even when our 2010 stay in northern Virginia put us within reasonable driving distance to the Big Apple.  Not this time.  With our 10th anniversary approaching, I knew the time was right for a return.

Thanks to a Foreign Service colleague that was headed to NYC that weekend as well, we managed to score a free ride into the city, arriving around 4PM on Friday, July 12th. 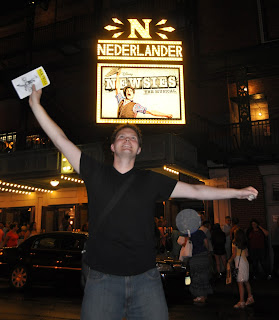 After a quick shower and rest at the hotel, we were out in the city, doing a quick walk around Times Square (in the rain!  Gah!)  before having a quick dinner at the Hard Rock Cafe (I love it, but haters gonna hate.) and finally landing at the Nederlander Theatre to watch Newsies.  Of the three shows we had lined up for the weekend, this was the one TJ was least interested in but I just absolutely had to see.    The Nederlander Theater had been home to Rent, my all-time favorite show, during its twelve-year stint on Broadway.  I had managed to see Rent in this performance space twice during that period, both during our last trip here in 2006 as well as a 2002 Thanksgiving getaway with a college friend.  I was curious about any changes that had been made to the interiors, as well as whether or not the new tenants had maintained the same level of quality.  The interior was the same, right down to the positioning of the freestanding merchandise booths.  Even the stage design seemed similar, with giant metal frames used to set the mood of a disenfranchised New York neighborhood.  The cast itself did not disappoint either, and I ultimately walked out to the sounds of TJ admitting that this had been a good idea. 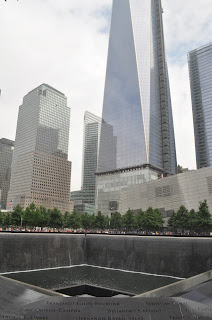 The following morning we paid our respects at The National September 11 Memorial.  Although the museum is not yet open, visitors are able to access the memorial proper, which features a pair of manmade waterfalls and reflecting pools placed within the footprints of the old World Trade Center.  Surrounding the pools are bronze plates featuring engravings of the names of every person that lost their lives in the 2001 and 1993 attacks on the WTC.  Stretching skyward in the adjacent lot is the still under construction One World Trade Center, the primary building of the new WTC complex.  I was amazed at how quiet the area surrounding the monument was.  Besides the occasional quiet mutterings of guests trying to maintain a respectful volume, the only sound to be heard was that of the waterfalls, crashing forever downward.  As we exited the monument area, we stopped to peruse the racks of brochures near the exit.  To our horror, yet sadly not to our surprise, we noticed that there were no Arabic pamphlets among the foreign language offerings.  Whether an intentional slight given America's horrific treatment of the Muslim community in the wake of 9/11 or an unfortunate oversight isn't for me to say.  It was merely an interesting observation.

The Brooklyn Bridge is conveniently located just a few blocks from the subway station that was to take us back to our hotel, so after noshing on a delicious slice of NY pizza, we crossed an odd little item off of my personal bucket list and walked across the bridge, which connects Manhattan and Brooklyn, separated by the East River.

There's not much to say about the experience, really.  It was hot.  It was a fairly long walk.  We saw two cyclists crash into each other at high speeds and then get into a shouting match that almost ended in physical violence.  Oh, and if for some reason you don't know how to walk across a bridge, here is an extensive article you may wish to read.  I didn't know of this article's existence prior to my travels, but I managed just fine.

Something else that I didn't know about but which would have been adorable given the fact that this was an anniversary trip, was the trend of leaving love locks on the bridge.  I snapped this picture to remind myself to look up what the heck it was I was taking a picture of, and it turns out that people will write their name and the name of their loved one on a padlock, clip it to the bridge, and then throw the key into the river so that their hearts cannot be unlocked from their loved one.  It's a sweet sentiment, and apparently an idea that New Yorkers stole from the French, who had themselves stolen from an Italian novel, "Ho Viglia di Te."

In order to rehydrate from the whole sweaty bridge walk, we stopped in at an Irish pub in Times Square for a beer and some yummy potato skins before heading back to Broadway to catch Kinky Boots at The Al Hirschfeld Theatre.  We hadn't made the connection at the time, but this was the same venue that housed The Wedding Singer in 2006.  We had been enjoying our Broadway experience so much that hot July day that we opted to see this horrid adaptation of an Adam Sandler movie instead of witnessing the  NYC 4th of July fireworks celebration, a tragedy that has haunted us these past seven years.  No such fears this time around.  Kinky Boots was amazing.  We laughted.  We cried.  We saw Tony winner Billy Porter and understood what the fuss was all about. 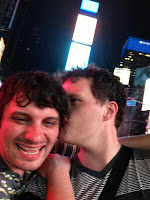 After the show we skedaddled back to the hotel for a quick siesta before heading back out on the town. We had a quick dinner at Au Bon Pain, did a lighting fast walk by Rockefeller Center and Radio City Music Hall, and wound up at Eugene O'Neill Theatre, where we saw the best show of the trip, The Book of Mormon.  It was actually playing in DC during this time period, but hey, when in Rome...

After the show we headed to Therapy, a bar we had visited back in 2006 that was also celebrating it's 10th anniversary that weekend.  Awww.  It was fate.  While there we met up with Carlos, a friend of ours from Guadalajara that lives and works in NYC.  We apparently had a lot of fun that evening, as photos taken in Times Square at what must have been 3 or 4AM, judging by the empty streets, ended up on my iPad the following morning. 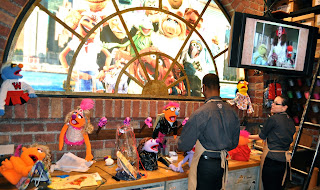 The next morning we set out for Central Park, but not before we stumbled upon FAO Schwarz and I remembered a promise unfulfilled.  For TJ's birthday in 2009, I had taken him to the newly opened "Jim Henson's Fantastic World," a touring museum exhibit which showcased original Muppets, sketches, and other tidbits that celebrated Henson's creative genius.  Afterwards I told him about a recent edition to FAO, The Muppet Whatnot Workshop, in which visitors could create their own personal Muppet.  There was an on-line ordering option that I had considered for his birthday gift, for TJ is a lifelong Muppet fan.  I told him that I had opted not to place an order, as I wasn't sure if he'd appreciate such a weird gift, but I had been wrong.  He said it would have been a perfect gift but did confess that he would prefer creating his own in person, and I promised him that one day we would return to NYC and he would have his chance.  When the store came into view, I shouted "OOH!  I wanted to go there!" and made a mad dash for the door.  I could tell by his disinterested "Ugh.  Okay" that he thought he was destined for 30-40 minutes of me looking at Lego and Batman toys, but bless him, he went along with it anyway.  I made a beeline for the back of the store, where I spun around and waited for him to catch up.  When he finally arrived I shot a thumb over my shoulder and asked, "You ready to make that Muppet?"  As he followed the trajectory of my thumb, his eyes filled with tears and he said "Yes!'

It took about twenty minutes to settle on a design and another hour for the workshop employees to turn that 2D design into a 3D Muppet.  We spent that hour strolling Central Park.  I could regale you with stories of how hot it was, and how at one point or another we both thought we were going to die of heat stroke, but let's just get back to that Muppet, for nothing is as adorable as this.

That marked the end of our weekend getaway.  By the time we picked up the Muppet, who has since been named Mikey Monster, it was time to gather up our luggage and head to the bus station.  It had been a perfect weekend, and we both agree it was one of our best trips to date.

There are some things I wish we had had time for, but I think they are all best saved for a longer trip during cooler weather.  I've still not been to the Statue of Liberty. I've not stood in line waiting for tickets to Letterman.  I want to one day ride the ferris wheel at the Times Square Toys R Us and buy chocolate at the Hershey store.  I want to see the Rockettes dance at Radio City Music Hall during the holiday season.  There's still a lot of Broadway to be seen.  Crazy as it sounds, I want to watch the ball drop, in person, on New Year's Eve.

Ten years strong with no sign of stopping.  I'm confident there will be other trips to New York.

I mean, we still need to lock our hearts up and throw the key in the river, right?
Posted by Aaron at 11:27 PM