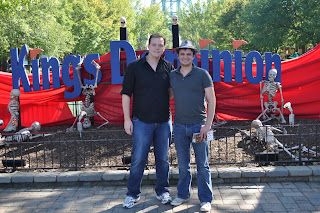 As any Central Floridian worth his salt knows, the best time to celebrate Halloween is the first weekend in October. The theme parks have had their Halloween events running for a week at this point, thus working out any kinks in the show, and the typical Halloween crowd won't show up for another couple of weeks, meaning shorter lines.
Halloween was always fun in Florida.
With that in mind, we sojourned 85 miles south of our temporary Falls Church home to find out how Virginia celebrates the holiday. I walked through the entrance of Kings Dominion this afternoon fully expecting to walk through the exit completely disappointed a few hours later. Halloween Haunt couldn't possibly hold a candle to Halloween Horror Nights or Howl-O-Scream, Right?
Wrong. I had an amazing time.

A Halloween-themed outing to Kings Dominion couldn't begin without a stop at Boo Blasters on Boo Hill. Boo Blasters used to be called Scooby Doo and the Haunted Mansion back when the park had a contract with Hanna-Barbera. Like Disney's Haunted Mansion, the exterior is an old scary house with funny tombstones in the yard. Inside, it's a shoot-'em-up similar to Universal's Men in Black and Disney's Toy Story Mania.

Later, TJ discovered a car full of dead clowns and
I made nice with the biggest Jack in the Box ever. 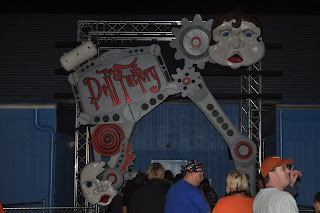 My second-favorite haunt of the night, mainly because
of TJ's astute observation that the "a" looks like a "u."
I'll let you sound it out for yourselves... 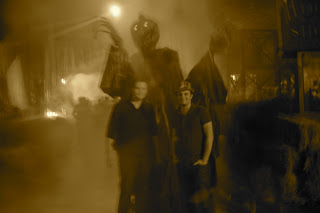 I wish this particular photo had turned out better, but the camera was on a weird setting at the time. I am including it anyway, because it reminds me of a recurring dream I used to have as a child. I would be riding in the backseat of the Mystery Machine. The Scooby Gang and I were fleeing from a pumpkin-headed creature that bore a striking resemblance to this fellow. The back door of the van would unexpectedly open and I would tumble out, finding myself at the mercy of the pumpkin man. I would always wake up just as he grabbed me. 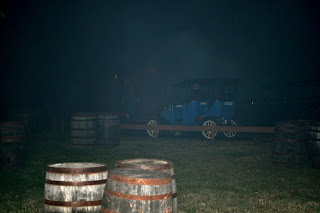 The most terrifying haunted house that I have ever experienced didn't even take the form of a house. The typically kid-centric fair offered by the Blue Ridge Tollway, which allows for a leisurely drive through a forest in antique gas-powered cars, becomes the Blue Ridge Bloodbath at night..a leisurely drive through a forest inhabited by chainsaw and shovel-wielding maniacs that jump out and smack the roof, hood, and trunk of your car as you try not to pee your pants and drive off the track. 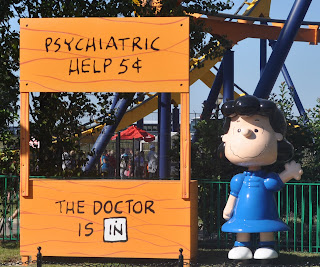 Fortunately, we had noticed that a licensed professional
that could help with post traumatic stress had set up
a booth earlier in the day.
Posted by Aaron at 11:47 PM