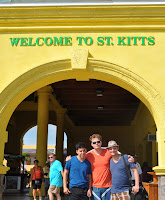 Okay, so if we’ve learned anything over the course of my last three blogs, it’s that getting off of a cruise ship and seeking your own adventure can be hit or miss.

If St. Maarten was a 1st Down, and St. Lucia was a fumble, then St. Kitts was our shot at a touchdown. Ooh, look at me and my macho baseball metaphors. Wait. What?

Anyway, we wanted to make sure that we had a good time on our last port day, so we finally bit the bullet and booked an excursion through Carnival. I’m only somewhat ashamed to admit that it ended up being the best of the bunch. Yeah, I know. Figures, right?

We booked what is called the “Sail & Snorkel Adventure,” which was described as follows:

Board your catamaran and sail the crystal clear waters to Shittens Bay (please, people, refrain from potty humor) for a rewarding snorkeling experience. 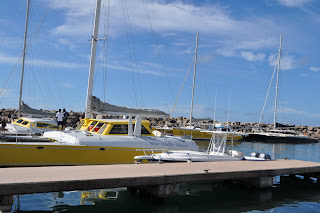 On this excursion you will: 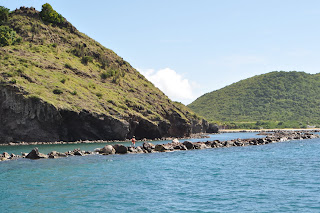 The evening prior to our departure, we were less than overjoyed to hear (from several sources) that a group had set sail on a snorkeling excursion out of St. Lucia earlier that day on a boat that was poorly maintained. I believe the phrase “missing one of its motors” was tossed around. They were later horrified when a motorboat was allowed to pass through their snorkel zone…while they were in the water. They probably Shitten the Bay (hey, I never said *I* would refrain from potty humor) at that point. Worst of all, this excursion had been booked through Carnival. Yeah, and we thought we had problems in St. Lucia.

This didn’t fill us with confidence, but what the hell, we decided to do it anyway. And we are so glad we did. It was our first experience in a catamaran, and it zipped through the bay at speeds that were simultaneously exhilarating and relaxing. The scenery was gorgeous. We saw some coral and a few fishes.

We snorkeled for the first time ever. It’s quite awkward at first, but a cakewalk once you allow yourself the time to adjust to your surroundings. It’s ridiculous, because you’re wearing a life jacket, but when you jump off the boat, your goggles and snorkel fill up with salt water, and you do experience a temporary, intense, irrational fear of drowning.

Or maybe that’s just me. I didn’t learn to swim until I was almost 10 years old, and only after two very real near-drowning episodes.
Of course, as it turns out, I wasn’t the only one with an irrational fear of drowning. Once TJ and I had made the leap and adjusted to our environment, we turned to find Antonio clinging to the ladder. Lacking the nerve for the jump, he had opted to take the stepladder approach to snorkeling. Unfortunately, he found himself unwilling to let go and just…float. After dragging him off the ladder, I managed to pull him just past arm’s reach of the boat before he decided he just wanted to sit this one out. It was disappointing. I wish he could have enjoyed the experience more. This had been a mutually agreed upon excursion, after all. On the bright side, we were able to get this photo out of the deal: 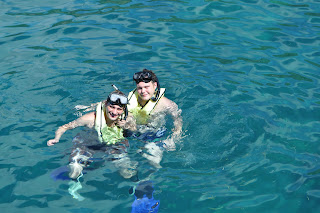 Note to self: Buy a waterproof camera for next time!

The ride back to port was a relaxing one filled with pleasant conversation, so-so Rum Punch, and tasty local beer. Everything the descriptions said it would be.

We stopped at a local joint for some Conch Fritters with some of our snorkel buddies before heading back to the boat. But not before doing the one thing Cruise Director Malcolm advised against: 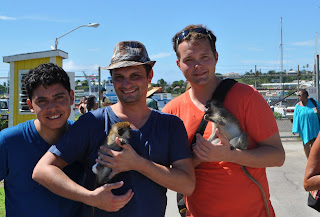 Paying strangers to take pictures of us with monkeys!
Posted by Aaron at 6:18 PM