The last time we took a cruise, we made the mistake of not booking any shore excursions. We simply assumed that we would be able to arrive at port, hop off the boat, and find something to do. No way were we going to let somebody sucker us out of OUR money, no-siree!
Yeah, that was dumb.
We disembarked in both Freeport and Nassau, took one look around, and hopped back on the boat.
We weren't going to make that same mistake twice. Yet we weren't quite willing to pay Carnival's inflated booking fees, either. 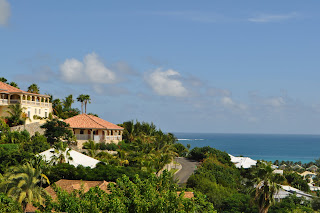 We instead opted to disembark, fight the urge to get back on the boat, and find a local tour stand from which to book an excursion. And we did just that. 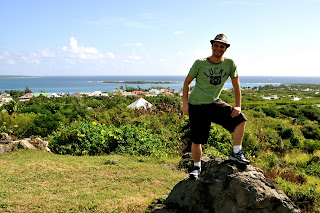 Thus began an exciting five hour tour of St. Maarten. The island has been split almost equally between the French (who call it Saint-Martin) and the Dutch (who call it Sint Maarten) since the 1600s. Although the French control a larger percentage of land mass, the Dutch currently beat them in population. Stop # 0 (I call it 0 because it lasted for 5 minutes and therefore doesn't count) of our trip treated us to this nice hillside view of the island. 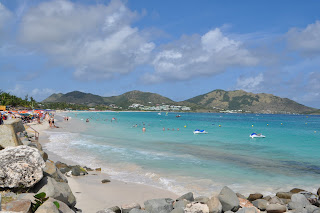 Our first real stop was at Orient Beach. Now, now, I know what you're probably thinking. But we did NOT know this tour was heading into nude beach territory when we booked the excursion. I've never been all that comfortable with my body, and generally find it a chore to drag myself to a clothing-required beach. That said, it's vacation, so why not.
Ha! Vacation, nothing! I don't get naked in public for anybody. But I won't say that I didn't do a little window shopping. For the children out there, and for the sake of our careers, I'll simply share this photo, shot facing the non-nekkid part of the beach.
The beach was lovely. The nudesters, not so much. But hey, let 'em enjoy their holiday, right? As we were heading back to the shuttle, I stopped to admire this one guy's zoom lens. No, really. He was carefully putting his very expensive looking camera away, and he had a bag containing two, maybe three, high powered zoom lenses. What did YOU think I meant? Anyway, as he set the camera down to talk to his wife, I turned my attention to TJ and Antonio, who were engaged in conversation with some of our shipmates that had just arrived at the beach. We were soon back in the shuttle heading for our second destination, all thoughts of zoom envy behind me.

The second destination on our whirlwind tour was a brief stop at a shopping plaza in Marigot, the island's French capitol. The beautiful Fort St. Luis overlooks Marigot Bay and the shopping district. This is the type of security we need in the US on Black Friday, people!
The fort was built in 1767 to protect the French residents of Marigot from invasion. It was later temporarily occupied by the Dutch, but now just serves as a nice place to catch a panoramic view of the island. We didn't have time to make the climb, so I will simply remember this portion of the tour as being the only source of air conditioning during the entire excursion. Sure the shuttle van had A/C. But you know how it feels when someone blows on you on a really hot day? Yeah, it felt like that.

The tour wrapped up with a delicious lunch at local burger joint/tourist trap Sunset Bar & Grill, located on the Dutch side of the island. This place isn't just famous for it's delicious burgers and margaritas, of which their were plenty. No, this place is best known for it's location. Not only is it situated on a white sandy beach with a nice cityscape backdrop, it also happens to sit at the end of the runway at Princess Juliana International Airport. Right. At. The. End.
What this means is that diners are able to watch jumbo jets take off and land while they eat. Doesn't sound very exciting, does it? Yeah, we didn't think so either. Turned out to be the highlight of the day. Just take a look at these photos to see how close you actually are to these babies. It's completely exhilarating to be this close to an airplane in motion. 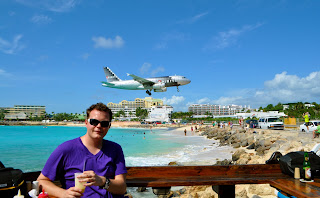 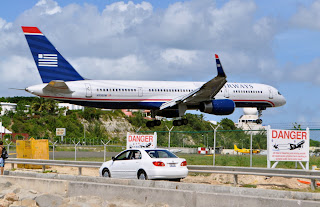 How about now? Note the sign, please.
After lunch our guide asked if we wanted to see any more of the island, but we all muttered an exhausted "Mmm?noooo...whaaa?" and he took us back to port so we could all shuffle off to our cabins for a much deserved afternoon nap.
But not before someone in the shuttle exclaimed, in a horrified my-trip-is-ruined kind of way, "Has anyone seen my camera bag?!?"
Whoops.
All in all, a great day (well, maybe not for that one guy). But would I ever go back? 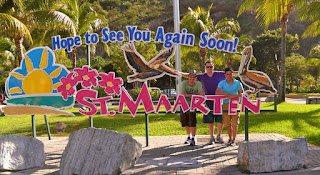