Ever since arriving in Jerusalem I've felt absolutely defeated by how much ground there is to cover and by how seemingly little we've done to scratch the surface.  I have found myself on numerous occasions exploring a museum or a town or a market and thinking "Gee, that was fun…but I didn't finish.  And I can't write about it if I didn't finish."  Or doing something and thinking "That was awesome, but not first-post-about-Jerusalem awesome."  Like anyone is sitting on pins and needles waiting for me to type out a masterpiece.  Well, nobody save for TJ, who just wants to retire early and live off of my millions.

Regardless, all this worrying has accomplished is two months of presence in the Holy Land and four posts that don't even come close to documenting my life here.  So let's get started, shall we?

We woke up this morning and realized we wanted to not be in Jerusalem today.  While trying to decide what to do, our friend Yehuda sent a Facebook message indicating some level of boredom on his part as well.  TJ asked where I would like to go, and I said the first city that popped into my head: Caesarea.

Caesarea was built by King Herod (37 - 4 BCE) on the remains of a Phoenician town, Strato's Tower (which sounds more like an building than a town to me), and named in honor of his patron, Agustus Caesar.  Initially, Caesarea's residents enjoyed all the pleasures of the Roman world:  abundant clean water, bathhouses, and entertainment venues.

Caesarea became the seat of the Roman governors around 6 CE and the status of the city's Jewish population quickly began to deteriorate.  66 CE saw a rebellion agains the Romans.   By 70 CE, Jerusalem had fallen and Caesarea was considered to be the Roman capital of Judea.

Caesarea gained status as an important center of Christian scholarship during the Byzantine period, and its harbor became the gateway to the Holy Land for thousands of pilgrims.  The Jewish community grew and religious academies were founded.

What came next was a series of conflicts in which the city found itself controlled by Muslims, Crusaders and even the French.  The city was abandoned following the Mameluke conquest of 1265, though Ottoman authorities eventually settled a group of Bosnian Muslim refugees there.

Annnnd now you know everything that I read on the plaque located at the entrance of Caesarea National Park.  Let's head inside. 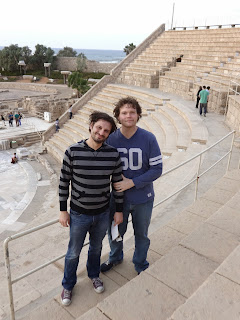 First up was the Roman theatre, built between 22-10 B.C.  The first of its kind in Israel, the already impressive amphitheater underwent several alterations throughout the Roman and Byzantine periods, including the conversion of the orchestra into a large basin for nautical games sometime during the 3rd or 4th century A.D.  Apparently, the theatre was home to some debaucherous fare, as it was ultimately closed by an offended regime of Christian Byzantine rulers during the 5th century A.D.

Yehuda informed us that in today's post-excavation world, Herod's ancient theatre is often used as a performance venue for popular Israeli and international artists.  It appears to be a popular locale, as a little on-line research told me that the nearby port hosts the annual Caesarea Jazz Festival, a three-night event featuring leading international artists.  Speaking of the port, lets draw our attention to the horizon where, from the top steps of the amphitheater, one can find a gorgeous view of the Mediterranean Sea. 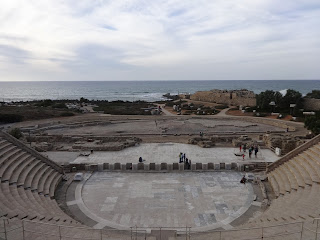 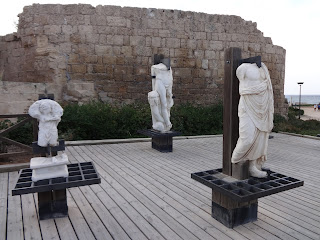 Descending the theater steps, our attentions were drawn to platform containing several examples of Roman and Byzantine statuary.  Most of Caesarea's statues were found headless during the excavation process.  Roman statuary, representing emperors, deities and local dignitaries, remained an important part of the urban ornament of the Byzantine city, and was sometimes displayed in Christian contexts alongside Christian symbols.

Beyond Herod's Theater you will notice a rocky point overlooking the sea.  Once upon a time, this was the home of the Promontory Palace, a behemoth of a structure built during Roman times.  Among the ruins is a pool, potentially used as a fish market. 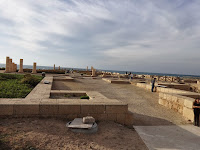 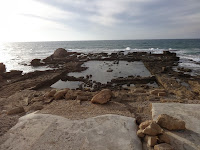 In its heyday the palace took up a whopping 4 acres of real estate and extended out into the sea.  Situated within site of both the theater and the hippodrome, the palace was a subtle reminder to the crowds of the might and generosity of the ruler who provided the spectacles.

In 58 A.D. the Apostle Paul was sent to Caesarea to be tried by the governor under false charges of desecrating the Temple.  It is speculated the the hearing occurred within the walls of this very palace.  Not satisfied with the outcome of this meeting, Paul exercised his right as a Roman citizen and demanded a hearing in the Emperor's Court in Rome.  He went on to be executed for the crime.  We, however, went on to the aforementioned hippodrome. 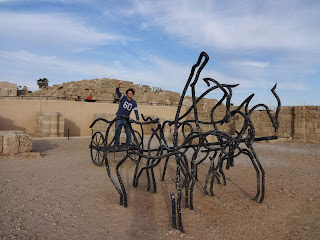 The hippodrome, or the Herodian Amphitheater, was famous for its chariot races, which ran for seven laps along a course 250m long by 50m wide.  Races began at the starting gates and ended in front of the dignitaries' tribune.  Either end of the course featured two turning points with sharp curves that posed incredible danger for the charioteers and their horses.  Needless to say, seats at each end of the amphitheater were highly coveted.

Just past the hippodrome are the remains of a bathhouse, the only important remain of the private wing of the Byzantine governor's palace, which was almost entirely destroyed by the construction of medieval fortifications.  Check out that mosaic tile.  Isn't it gorgeous?!?  The remains of a public bathhouse featuring many more mosaics can also be found on the grounds, but we unfortunately ran out of time before the park closed. 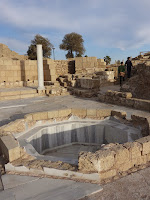 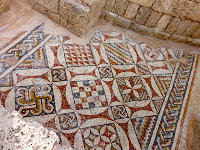 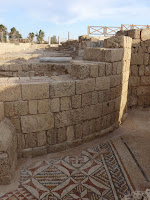 Stepping outside of the gates to the national park, we were shocked to find that we were standing in…more ruins.

The Bosnian Mosque, constructed by the Turks for the Bosnian refugees in the late 19th century, is an easily identifiable fixture down by Crusader Harbor... 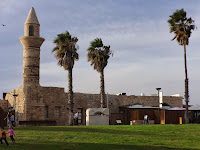 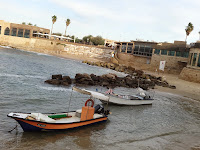 …while directly across and uphill you can find the partially excavated remains of several structures clumped together side by side: 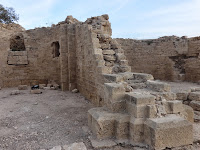 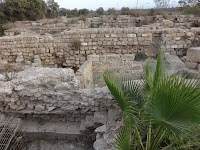 The Crusader Church (13th Century) - Construction was undertaken by France's King Louix IX but never completed.  A smaller church eventually took its place.  The Cathedral of St. Peter, formerly the city's Great Mosque, stood northeast of it but was destroyed in 1187.

The Temple of Caesar, built when the city was founded 22 - 10 BCE - Herod's temple stood on this site.  Archaeologists are still trying to identify the temple's foundation beneath later buildings.

A Christian church stood on the site of Herod's temple in the 6hh century.    The church was octagonal in shape like Jerusalem's Dome of the Rock and the building contained floors and walls made of marble.

On the other side of the ruins we found the Postern Gate, a remnant of the Crusader Period (12th - 13th centuries) that served as a secret entrance/exit by way of the moat. 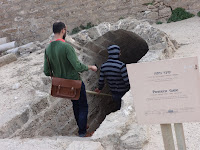 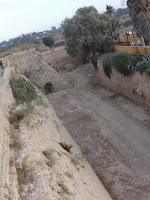 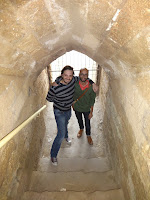 We walked over to the harbor where we dined on fish and chips (TJ and me) and lamb kabobs (Yehuda) at Port Cafe, Lonely Planet's sole dining recommendation for the city.  Not a bad recommendation at all.  The food was delicious, and the ocean view was amazing. 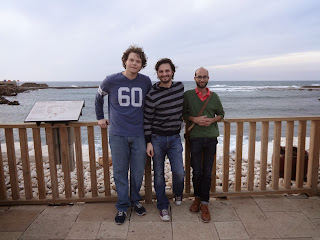 Sadly, the day ends there.  (Well, there plus a two hour drive.)  But it was the perfect end to a perfect day.  Although we spent but a few short hours in Caesarea, I feel as if we experienced a lot.  It was the first excursion that had me saying "Must blog tonight!"  It's inspired me to go back through my photos and perhaps post about some prior experiences.

It's definitely inspired me to return to Caesarea one day soon, hence the "Part One" aspect of the post title.
Posted by Aaron at 7:23 PM