We awoke bright-eyed and bushy-tailed on the morning of Saturday, December 7th, eager to begin our next adventure:  a six hour round-trip guided tour of nearby Bethlehem.

Annnd, I'm going to pause right there.  This is my first post since arriving in Jerusalem that will really touch on religion.  I suspect a lot of them will, and because of that I just want to provide a little disclaimer right here, right now.

I was born into what, by process of elimination, would be considered a Christian home.  I am Jewish by choice.  That doesn't mean that I think Judaism is the one, true religion and everyone else is wrong.  It simply means that it is the one that works best for me.  As I write over the next two years, just assume that there are a lot of adjectives like "allegedly," "supposedly" and "theoretically" implied in my writing.  Who am I to say what did or didn't happen (and where!), often to the contrary of another person's faith? Nobody, that's who.

Whew!  We now resume this Bethlehem blog, already in progress. 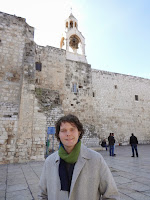 Our first stop on this whirlwind tour was The Church of the Nativity, a basilica commissioned in 327AD by Constantine and his mother Helena over the site popularly thought to be the birthplace of Jesus of Nazareth.  The original was destroyed during the Samaritan Revolts and eventually replaced in 565AD by the current structure.  The church adds to my collection of UNESCO World Heritage Sites, and holds the distinction of being the first to be listed under Palestine (By UNESCO, not by me.  Though by me, too, I guess.). 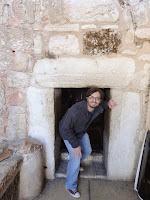 Humility," because you have to bow in order to enter.  Or you could Limbo.  That probably works, too, and is often humiliating.  The original purpose of the entryway's small size, however, was more pious than practical:  it helped deter vandals and invaders.

Once inside, you will find yourself pushed, shoved, and trampled over by pilgrims and tourists fighting for space that doesn't exist.  It's CROWDED.  Chaos ensues as tour guide speaks over tour guide, cameras flash, children find ways to run despite there being no space to do so, and the devout try to light candles and find a moment's peace despite their surroundings. 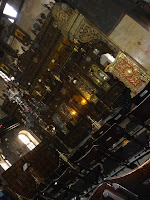 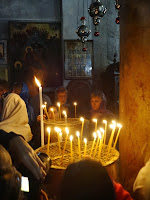 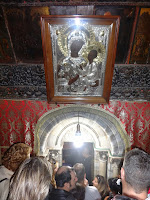 Toward the back of the sanctuary you will find a staircase leading to the Grotto of the Nativity, where Jesus is said to have been born.  The exact spot is marked by a 14-pointed silver star set into a marble floor and surround by lamps.  The altar is denominationally neutral.  It is also crowded.  This is a picture of TJ standing in front of it.  I promise. 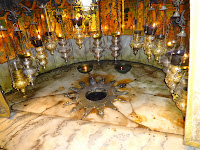 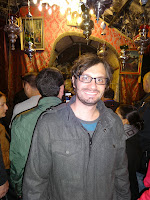 Another altar in the Grotto, maintained by the Roman Catholics, marks the site where Mary laid the newborn baby in the manger.  After posing for this picture, I stood and hit my head on the ceiling and said "Ow!"  Only….I don't think I said ow.  I think I may have, possibly, said something you shouldn't say in a church.  Oops. 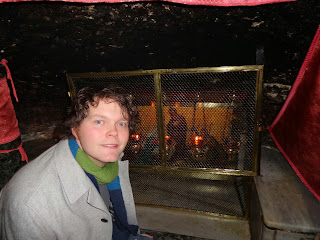 Adjoining the Church of the Nativity is The Church of St. Catherine, a Roman Catholic church built in a modern Gothic revival style. 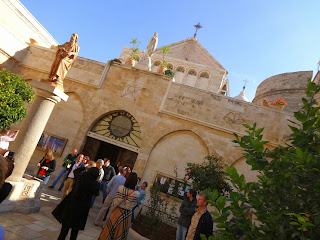 This is the church where the Latin Patriarch of Jerusalem celebrate the world famous Christmas Eve Midnight Mass.   [SPOILER ALERT!  There will be more on that tomorrow!] 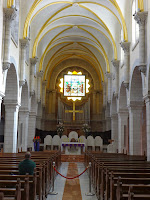 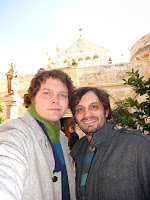 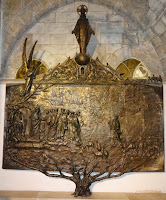 The Tree of Jesse (aka Call of David), on display at the entrance, was blessed by Pope Benedict XVI during his 2009 trip to the Holy Land.  The Bas-relief represents the visit of the prophet Samuel to Jesse (seated, surrounded by seven of his sons).  On the opposite side is David, the youngest son, arriving with his flock.  The angel reminds us that the promises made to David have been fulfilled with the Incarnation of the Son of God. The tree symbolizes the genealogy of Christ, who is situated at the highness place in the sculpture.

Beneath The Church of St. Catherine lay a a series of caverns that make up the remains of an ancient monastery.  The caves contain a number of chapels, one dedicated to St. Jerome, who spent 30 years translating the Hebrew Bible form Hebrew into Latin, and the New Testament from Greek into Latin. 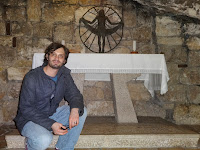 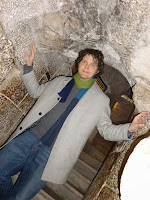 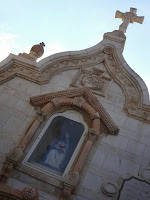 Next on the agenda was the Milk Grotto Chapel.  It is said that Mary and Joseph stopped here to feed baby Jesus while journeying to Egypt.  Legend tells that a drop of Mary's breast milk touched the ground, causing the red rock of the grotto to turn white.  It is said that the rock has healing properties, were it to be ground up and consumed.  Make of that what you will, but I know what *I* think.  Nevertheless, if you google this place you will find all sorts of miracles that the grotto has caused to occur.  There's not much to the place other than a nifty sculpture of the Holy Family and a few images of Mary breastfeeding the baby.  Oh.  There were also some young female tourists at the entrance arching their backs and poking their breasts out seductively as they posed for pictures.  Way to keep it classy, people. 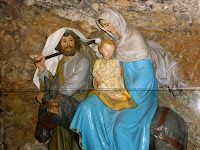 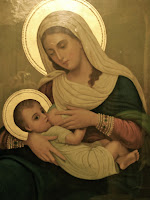 We next made our way to Manger Square, passing numerous craftsman shops along the way.  Tourism is the leading industry in Bethlehem, and many people make their livings carving intricately detailed nativity scenes and selling them in their souvenir shops. 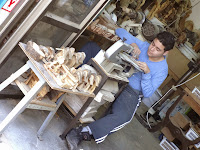 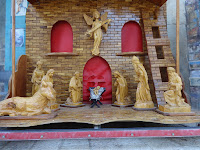 Manger Square is of course named after the manger in which Jesus was born, and the Church of the Nativity lies at the edge of the square.  This being December, Christmas is exploding all over Bethlehem, and Manger Square is the focal point of the celebration, with a giant Christmas Tree and a beautiful manger taking center stage.  Bethlehem's only mosque, The Mosque of Omar, lies across the square.  Named after the second caliph, Omar Ibn al-Khattab, the mosque was built in 1860 on land provided by the Greek Orthodox Church in honor of Omar, the Prophet Mohammed's father-in-law.  In 637, Omar took Jerusalem from the Byzantines and stopped for prayer at the Christian Church of the Nativity.  He declared that the church would remain a Christian shrine and that Christians, even under Muslim rule, would remain free to practice their faith. 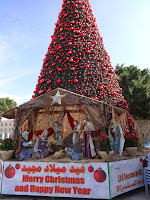 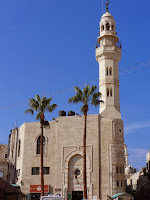 The tour portion of our journey concluded at Sheperd's Field, located two kilometers outside of Bethlehem near the town of Beit Sahour (بيت ساحو).  Christians believe this to be the site at which an angel appeared to the shepherds and announced the birth of Jesus. 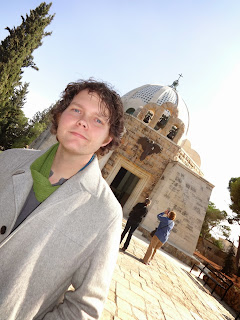 8 Now there were in the same country shepherds living out in the fields, keeping watch over their flock by night.  9 And behold, an angel of the Lord stood before them, and the glory of the Lord shone around them, and they were greatly afraid.  10 Then the angel said to them, "do not be afraid, for behold, I bring you good tidings of great joy which will be to all people.  11 For there is born to you this day in the city of David a Savior, who is Christ the Lord.  12 And this will be the sign to you:  You will find a Babe wrapped in swaddling cloths, lying in a manger."  13 And suddenly there was with the angel a multitude of the heavenly host praising God and saying:  14  "Glory to God in the highest, And on earth peace, goodwill toward men!"

The main attraction here is the Church of the Angels (above), a modestly sized, domed house of worship featuring three paintings each depicting a different aspect of the birth narrative from Luke 2. 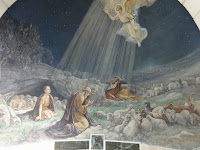 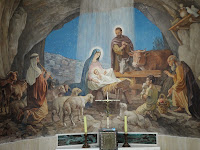 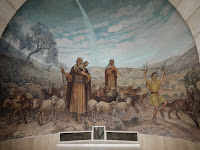 Underneath the church is another church, built in a cave by Saint Helena in 325AD.  This cavern is thought to have been the shelter used by the shepherds on that fateful night. 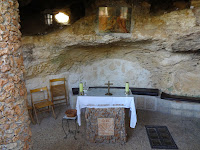 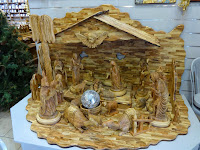 The tour concluded with a short (though it felt like it lasted forever.  FOREVER!) stop at one of the tackiest gift shops I've ever seen.  So tacky that they even sell postcards of their shop.  So tacky that they replaced the baby Jesus with a disco ball.  You know how Christmas has become so commercialized with decorations going on sale right after Halloween and Black Friday consumingThanksgiving?  That's kind of what this place does to the Holy Land.  Everything was priced in US Dollars.  I couldn't believe it.  They did offer a 30% discount, though.  But guess what.  It's still more expensive, and of a lower quality, than just about anything you will find in Old City Jerusalem.  There, that's your PSA for the day.

After the attempted tourist exploitation, we crossed the street and settled in for a delicious lunch of wine, meatballs, smoked chicken, and hummus at the Grotto Restaurant. I didn't take any pictures of the food because it was served family style at a table of eight and those hungry vultures weren't playing.  I was too busy fighting for food, so you'll just have to trust me that it looked (and tasted) amazing.  Speaking of amazing, how about that dining view?

That wrapped up our day in Bethlehem.  I headed home and promptly started writing.  Then I took a break.  Then it began to snow (Not that same day…it was a long break).  Then the snow melted.  Then I continued taking my break.  But, lo!  We won two tickets to the Christmas Eve Midnight Mass!

As chronological writing demands, I simply had to get this one all wrapped up in a pretty little bow for you all so that tomorrow I can regale you all with tales of this evening's adventures!

Hope everyone has a safe and happy Christmas Eve (or as us non-Christians like to call it, Tuesday night).  See you tomorrow!
Posted by Aaron at 12:21 PM