The first thing we did when the boat docked in Cyprus was to find a coffee shop with Wi-Fi.  The next thing we did was start to panic as we all realized that nobody had bothered to plan any adventures for our short weekend getaway.  The third thing  we did was decide to just wing it, start walking, and see what happened. And the fourth thing we did was to finally detach our carcasses from the sofa in the climate controlled coffee shop and schlep off into the heat of the great unknown.

The ship had pulled into port in Larnaca, third largest city in Cyprus, located along the island's southern coast.  Larnaca is best known for its gorgeous palm tree seafront, which would explain why that's the feature I remember most vividly.  In researching for this blog post, I learned that the city is thought to have received its name because of the large number of larnakes (sarcophaguses) that were discovered there.  I'm sad to report that I didn't see any.  Reason enough to return, I suppose.

As we walked along the palm-riddled Finikoudes Promenade, we stumbled upon a few pieces of art. 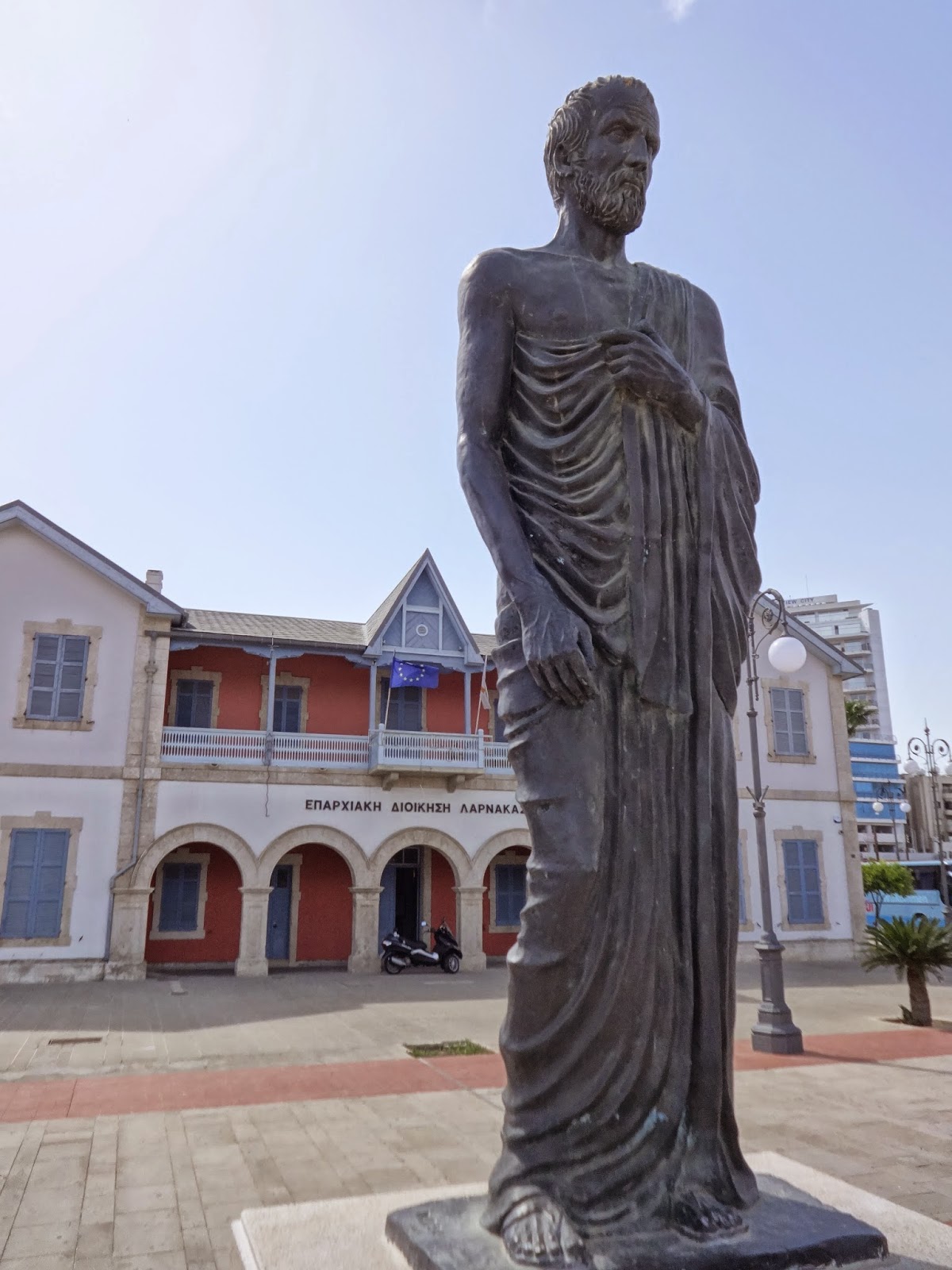 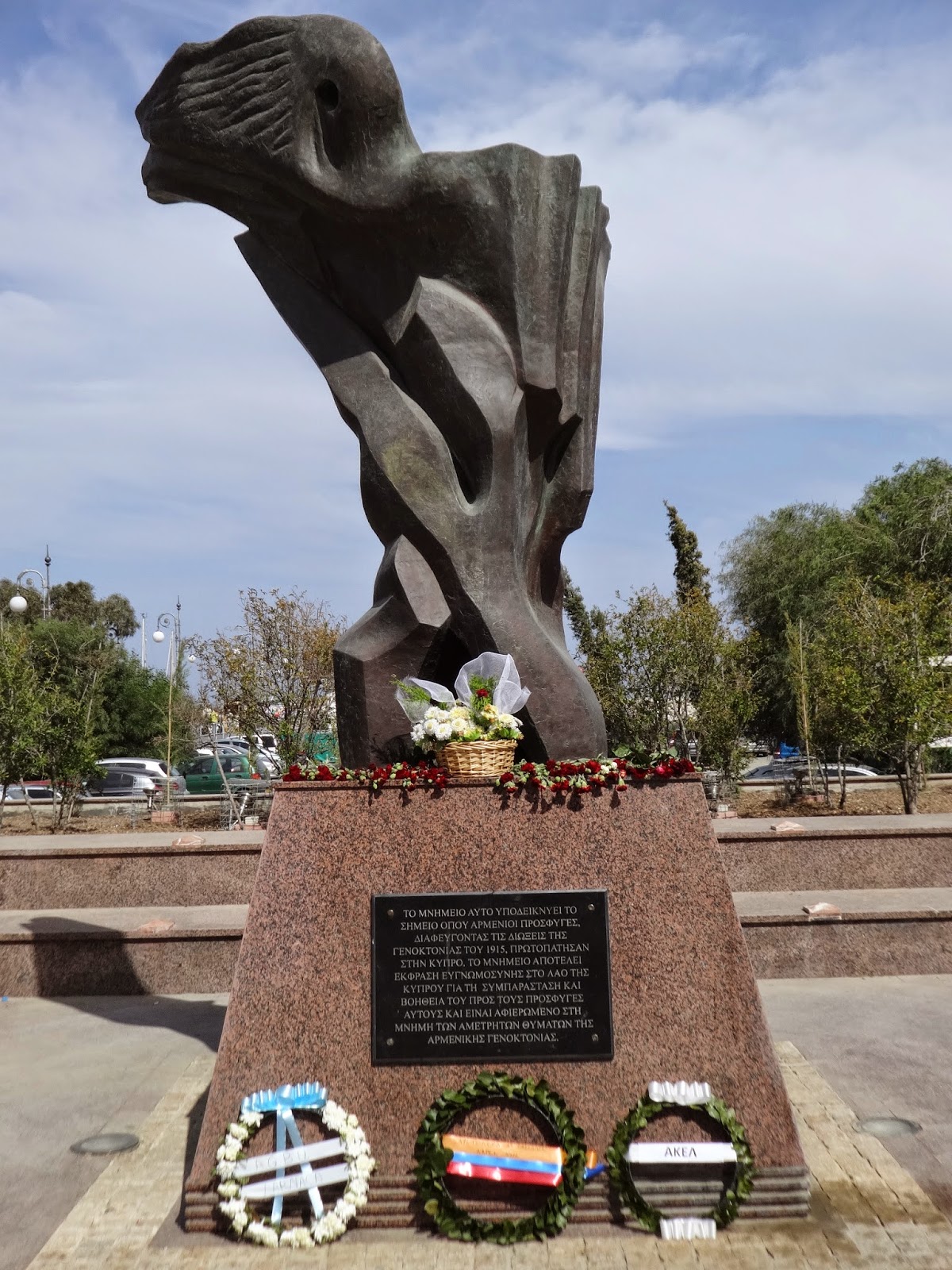 Left:  Zeno of Kition (ancient Larnaka).  Zeno is credited as the founder of Stoicism,  a Hellenistic school of Philosophy.  He was the first to divide philosophy into logic, physics, and ethics.  He taught that the purpose of human existence is the virtuous life, which is the life in accordance with nature.

Right:  This monument marks the spot where Armenian refugees fleeing persecution during the genocide of 1915 first landed in Cyprus.  Known as the Armenian Holocaust, the tragic event occurred when the Ottoman government set out to systematically exterminate its minority Armenian subjects within their historic homelands, what would today be known as the Republic of Turkey.  The sculpture represents the gratitude of the Armenian nation towards the people of Cyprus for their assistance and generosity to those refugees and stands in memory of the countless victims of the Armenian genocide. 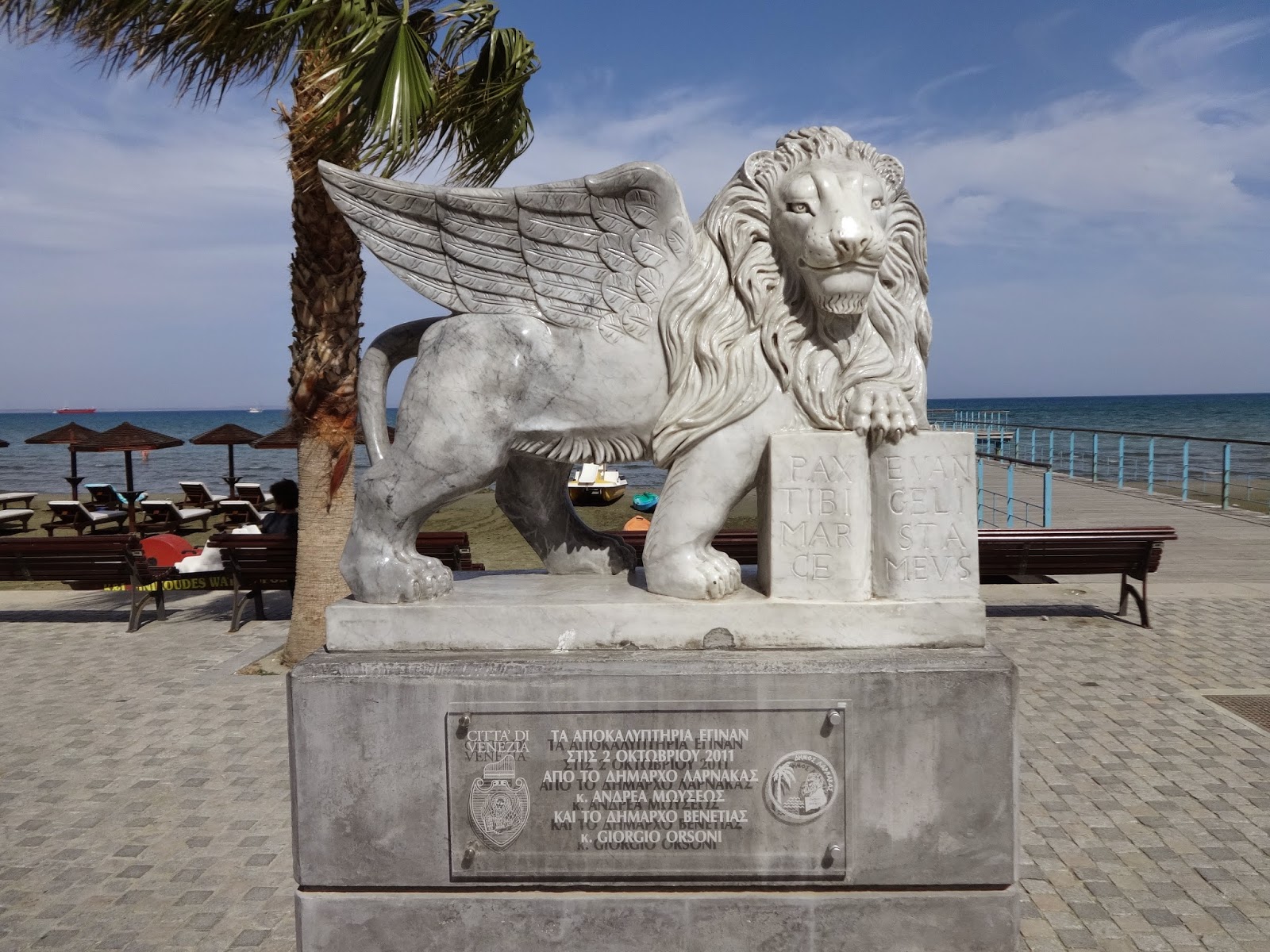 Venetian Lion.  Venice has a long history with Cyrpus, which will be touched upon below. 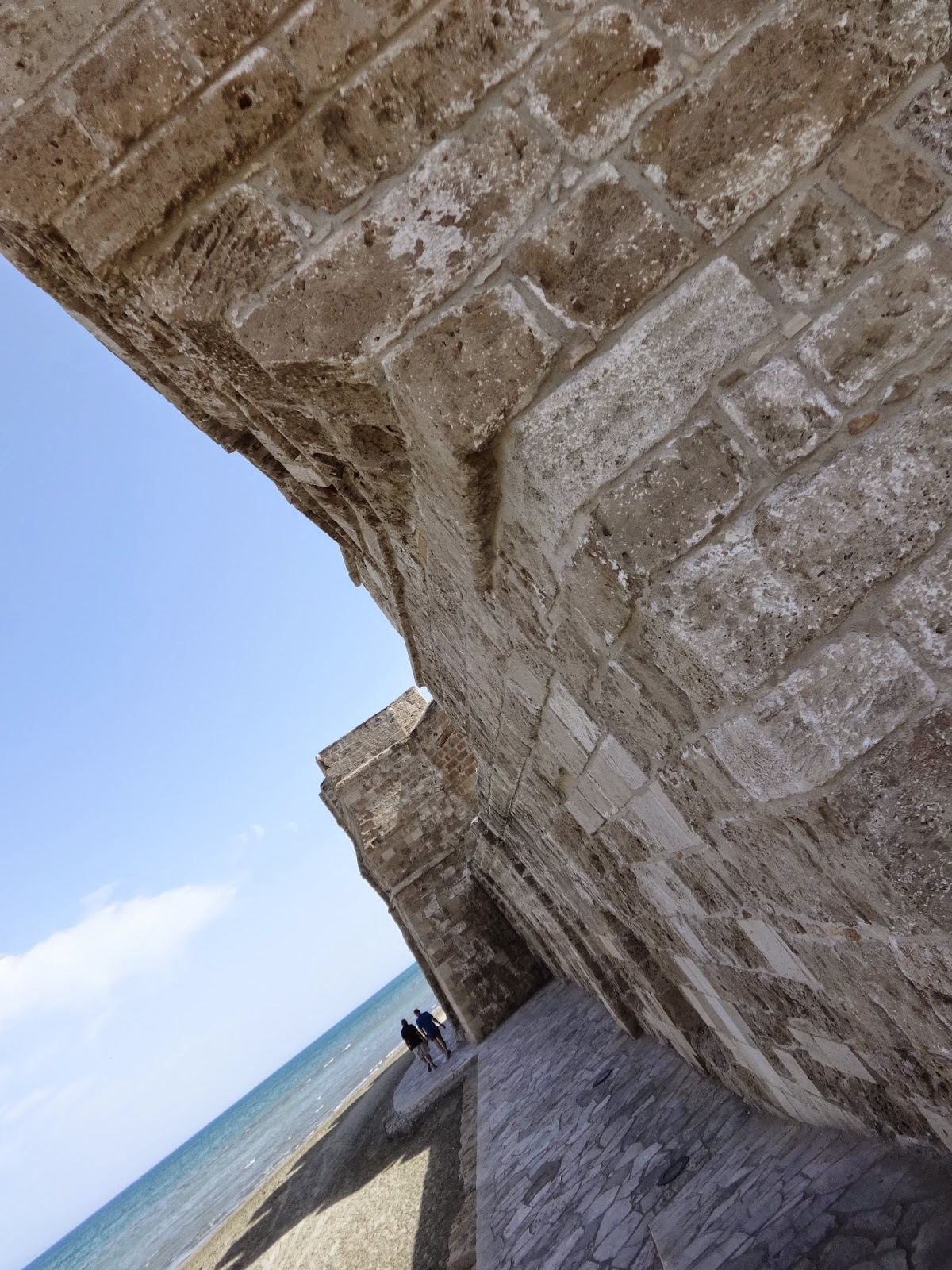 Larnaka Castle was allegedly founded by the Byzantines in the 12th century, though the oldest written evidence of its existence dates only to the 14th century.  Chronographer Florius Boustronius dates the castle to the era of King James I (1382-1398AD) of House Lusignan, who is said to have built the castle to protect the town harbor.

During the period of Venetian rule (See?  I told you it was below.), the fort was strengthened as a result of the upgrading of the port, which at the time played a pivotal role in the trade of salt and other goods to and from the Syro-Palestine coast and the Western World.  The fort was abandoned at the end of the Venetian period when it was decided that the base of island defense would be moved elsewhere.  Ottoman troops landed near the fort and decided to use the port as the base for their own fleet. 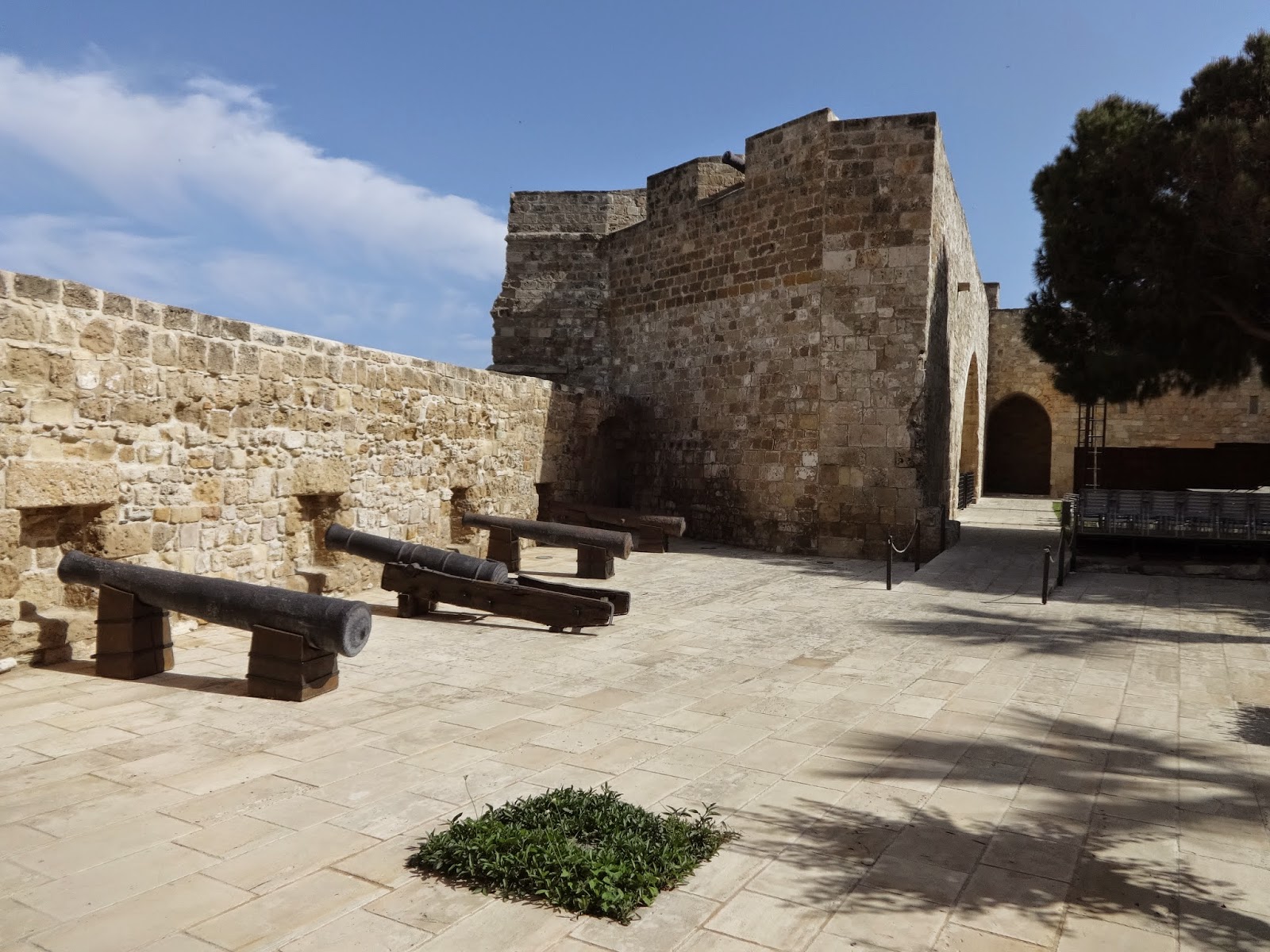 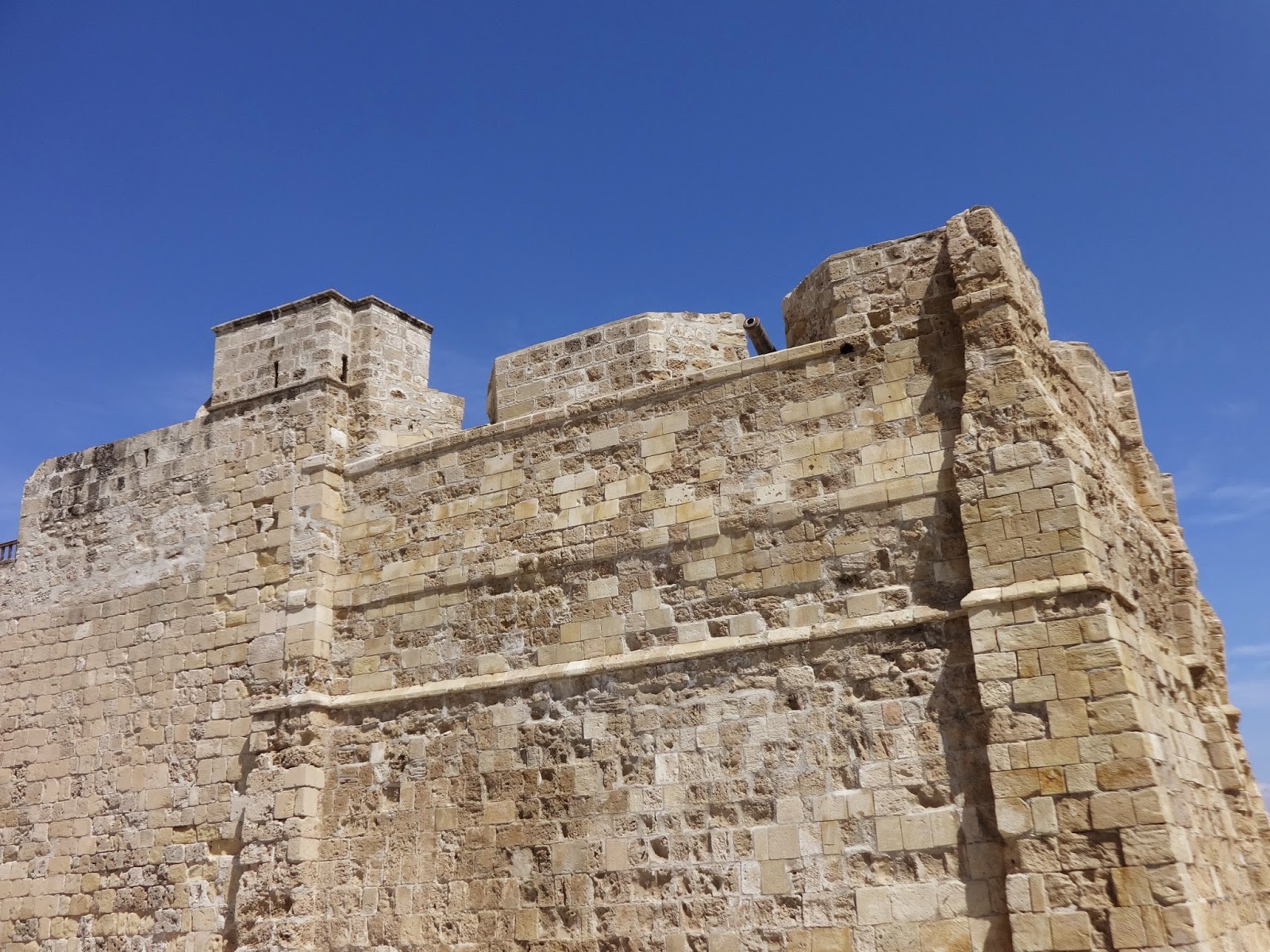 Sources from the 18th century say that the castle, having long since fallen into a state of disrepair, was rebuilt by the Turks in 1625AD and retrofitted with cannons and other forms of defense.  More recently, the British used the castle as a place for the execution of convicts and as a prison.  These practices ended in 1948.  Today, the castle hosts a Medieval Museum and a garden theater.

Now, we were very bad tourists in that we didn't take many photos of ourselves during this weekend outing...but we all somehow managed to take a photo here.  So, enjoy. 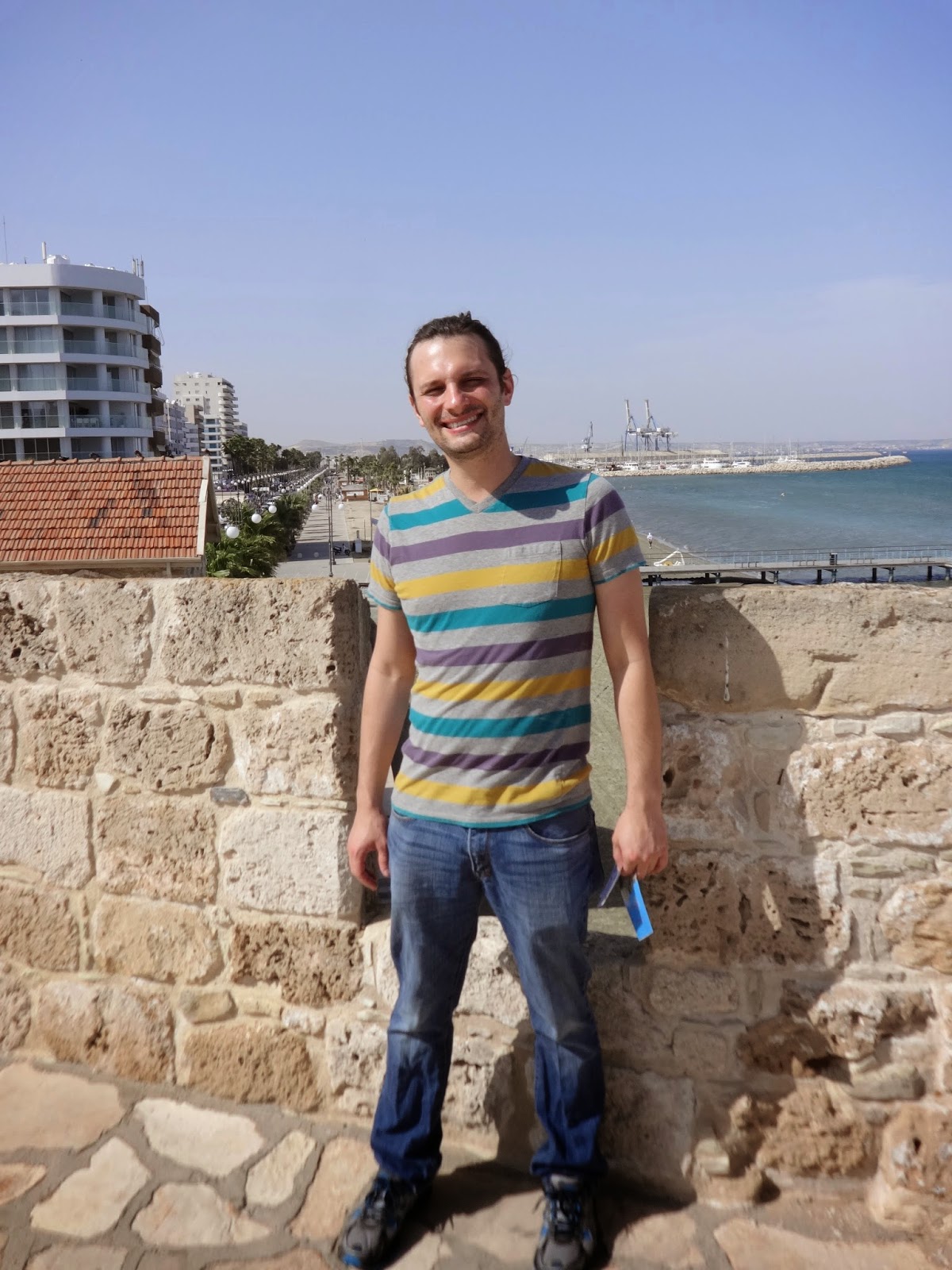 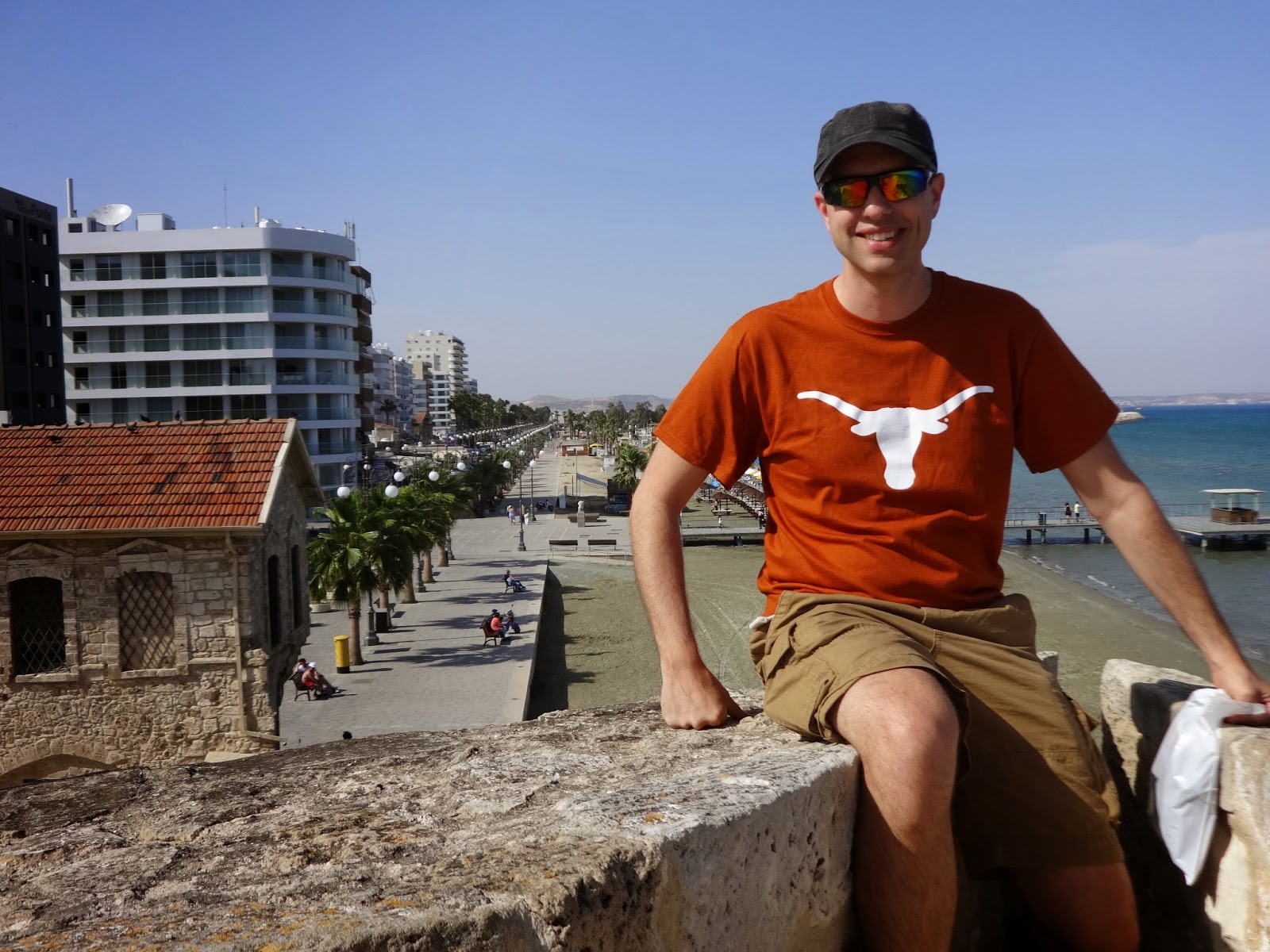 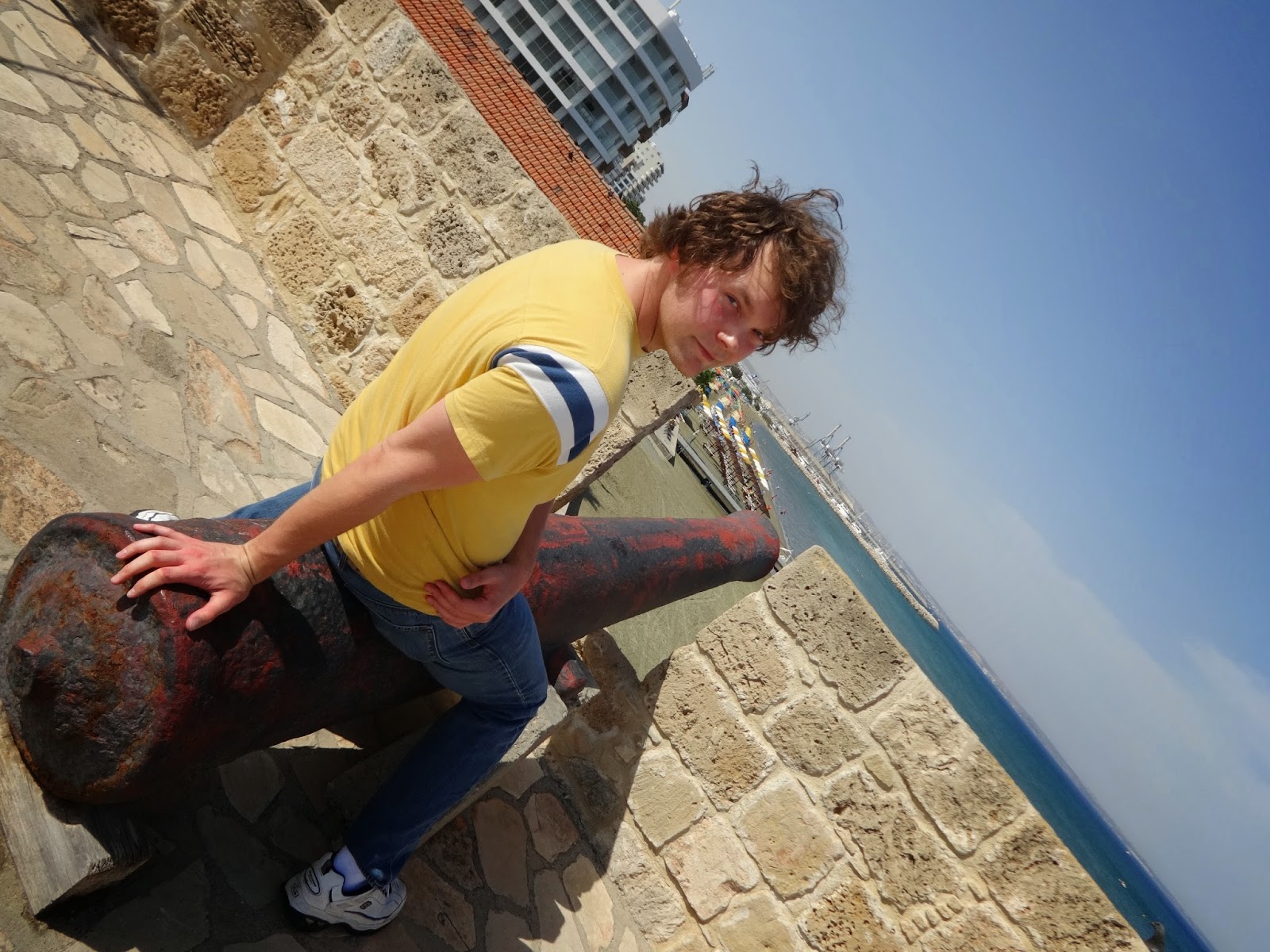 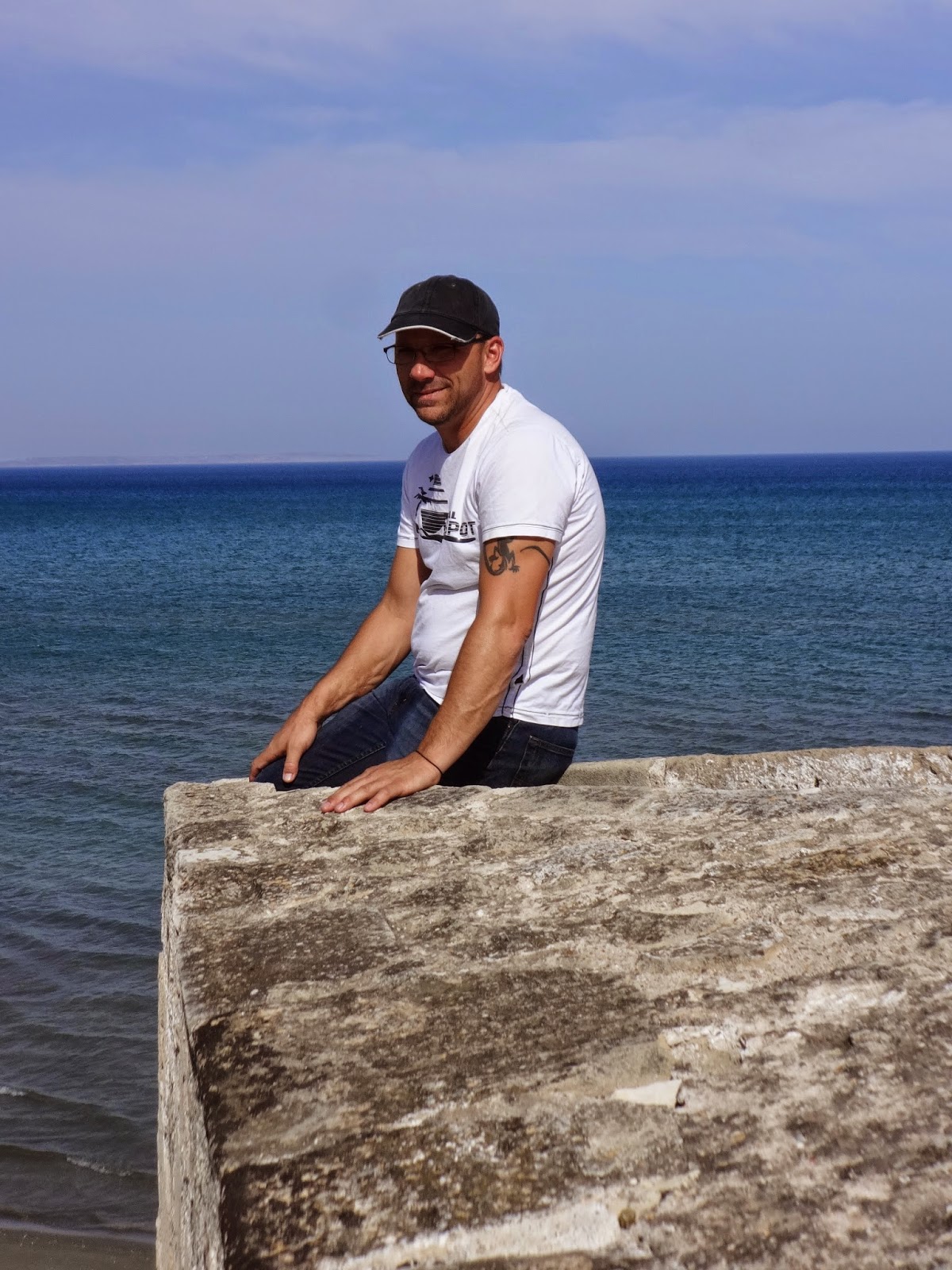 Our next stop was...a bus stop!  With only 24 hours or so to see the island, we decided our time would best be spent seeing the city of Nicosia on our first afternoon, and then spend the following morning/early afternoon further exploring Larnaca prior to the ship's departure for Haifa.

Nicosia, the islands largest city, is the capital and seat of government of the Republic of Cyprus.  The northern part of the city functions as the capital of the Turkish Republic of Northern Cyprus.  This disputed region, recognized only by Turkey, is considered Cypriot territory under Turkish occupation by the international community, and has been considered such since 1974.

On July 15, 1974 the Cypriot National Guard ousted President Makarios III and replaced him with Nikos Sampson, who was in favor of a union with Greece.  In response to this coup, Turkey invaded the island on July 20, claiming that the action was compliant with the 1960 treaty of Guarantee, which prevented Cyprus from participating in any political or economic union with another state.   Turkey soon took control of the north and divided Cyprus along what came to be known as the Green Line.  Sampson resigned and Makarios returned.  It goes without saying that, living in Jerusalem, all of this sounds somewhat familiar. 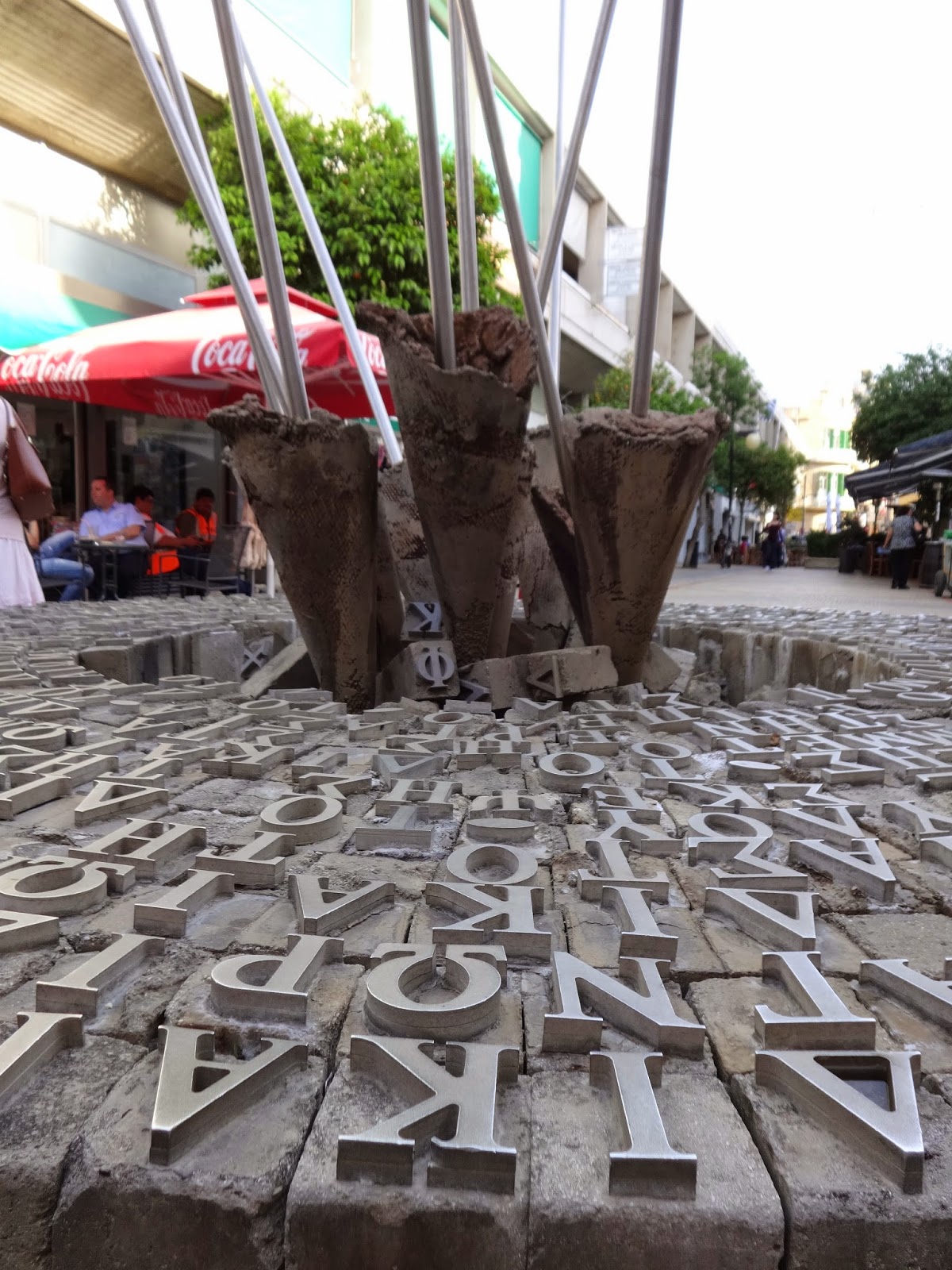 RESOLUTION (1995), by Cypriot sculptor Theodoulos Grigoriou, reiterates the faith of the city of Nicosia and its inhabitants to human rights as the only precondition to peace and freedom.  It was the very first thing we noticed after hopping off of the bus and making our way into the heart of Greek Nicosia.

On the round cement base, part of the text of the Universal Declaration of Human Rights is written in embossed Greek letters. Steel lances driven into the center of the text represent its symbolic destruction.  The sculpture is a protest to the violation of human rights.  From where I was standing, looking straight ahead was the expanse of Greek Nicosia.  Directly behind me was the entrance to Turkish Nicosia.

Scanning the plaza before us an noting a beautiful, bustling, but otherwise normal city city center, we turned and opted to first explore the Turkish side of things.

We first found ourselves at the Büyük Han (Big Inn), located in the market center.  The Han, which was built in 1572 to provide accommodation for travelers from Anatolia and other parts of Cyprus, consists of 68 rooms which open to vaulted galleries surrounding an inner courtyard and 10 additional shops that open to the outside of the Han.  An Ottoman mosque stand on marble piers in a fountain at the center of the courtyard.  We took a moment to peruse the shops, which consisted of local textiles and craft works, before continuing our explorations. 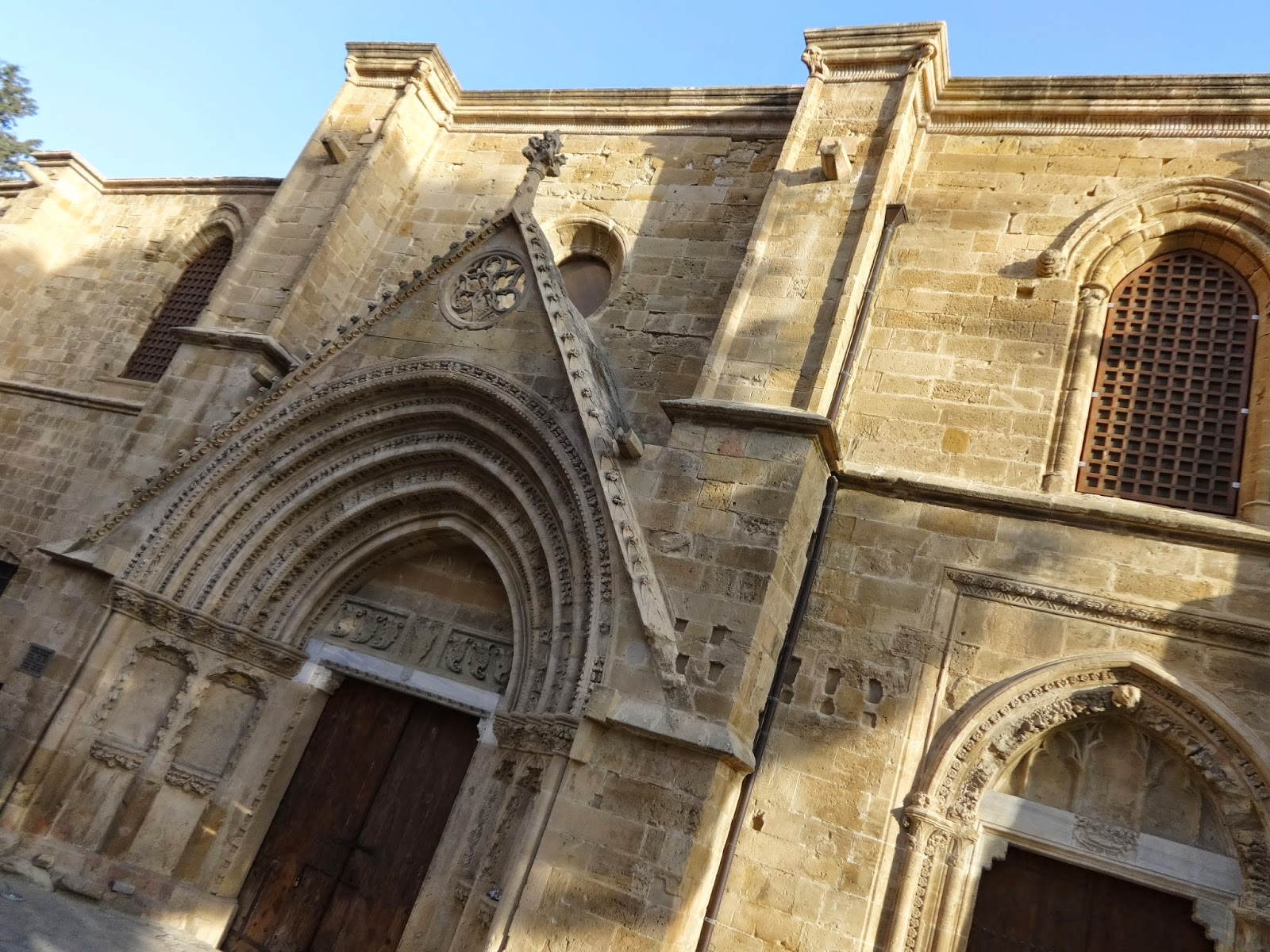 We next stumbled upon the gorgeous-on-the-outside-but-not-sure-about-the-inside-because-it-was-closed Bedestan (Saint Nicholas Church), which combines 6th century Byzantine and 14th centuryGothic architectural characteristics.  The church was used as a covered market (bedestan) during the Ottoman rule but was restored by the United Nations Development Program, Partnership for Future (UNDP PFF) and funded by the European Union and Cyprus Evkaf Foundation over a five year period that ended in 2009.

Adjacent to the Besestan was the Selimiye mosque.  Originally a Roman Catholic cathedral, the 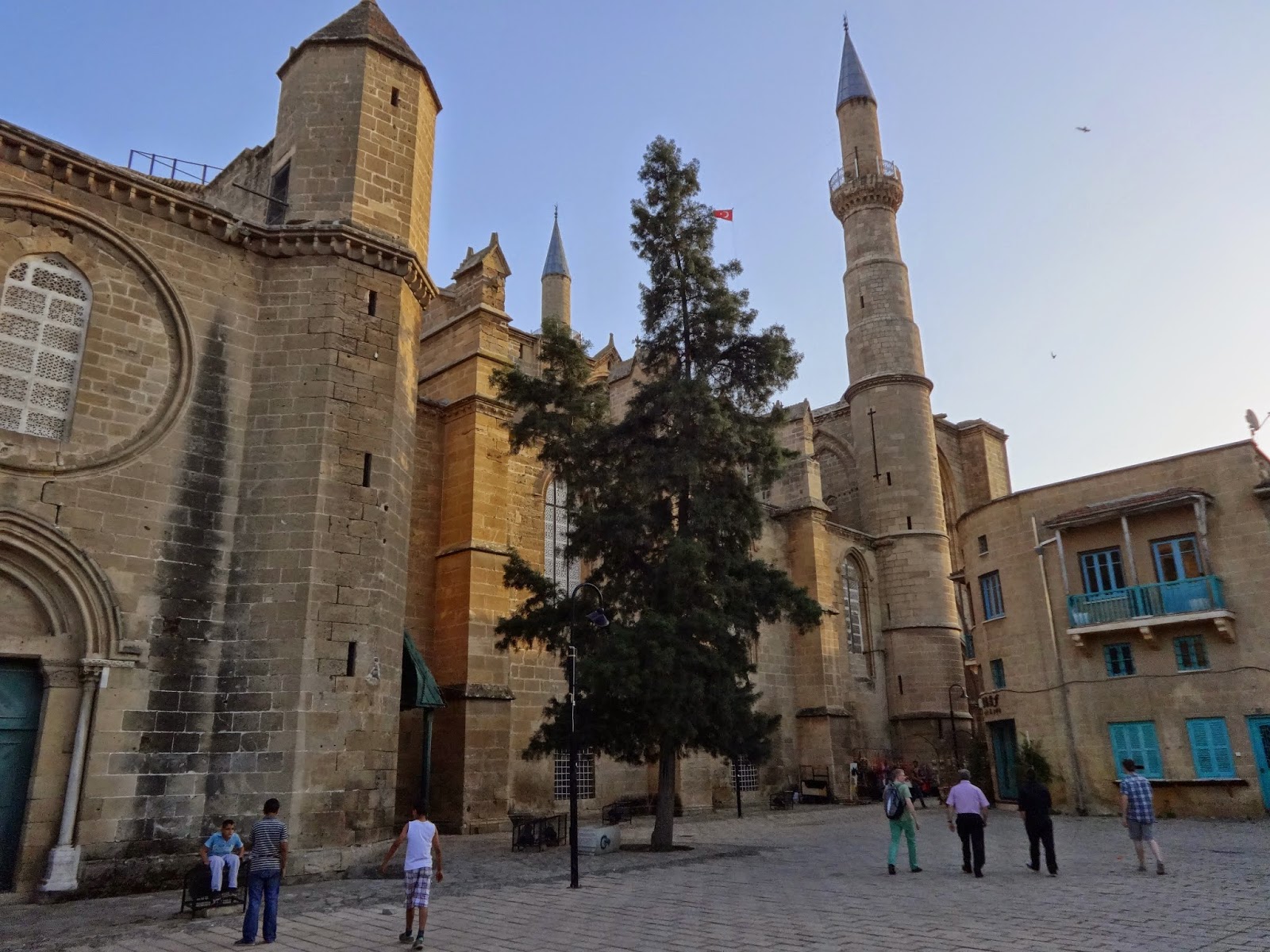 mosque is the oldest and perhaps finest examples of Gothic art in Cyprus.  Construction egan in 1209 during the reign of Lusignan king Henry I and lasted 150 years.  When the Ottomans told the city in 1570, they destroyed much of the existing decor as they converted the structure into a mosque.  The Selimiye is the most beautiful, most attended mosque in Nicosia.  As an active house of worship that was currently between prayers, the doors were open and we were able to step inside for a quick look around. 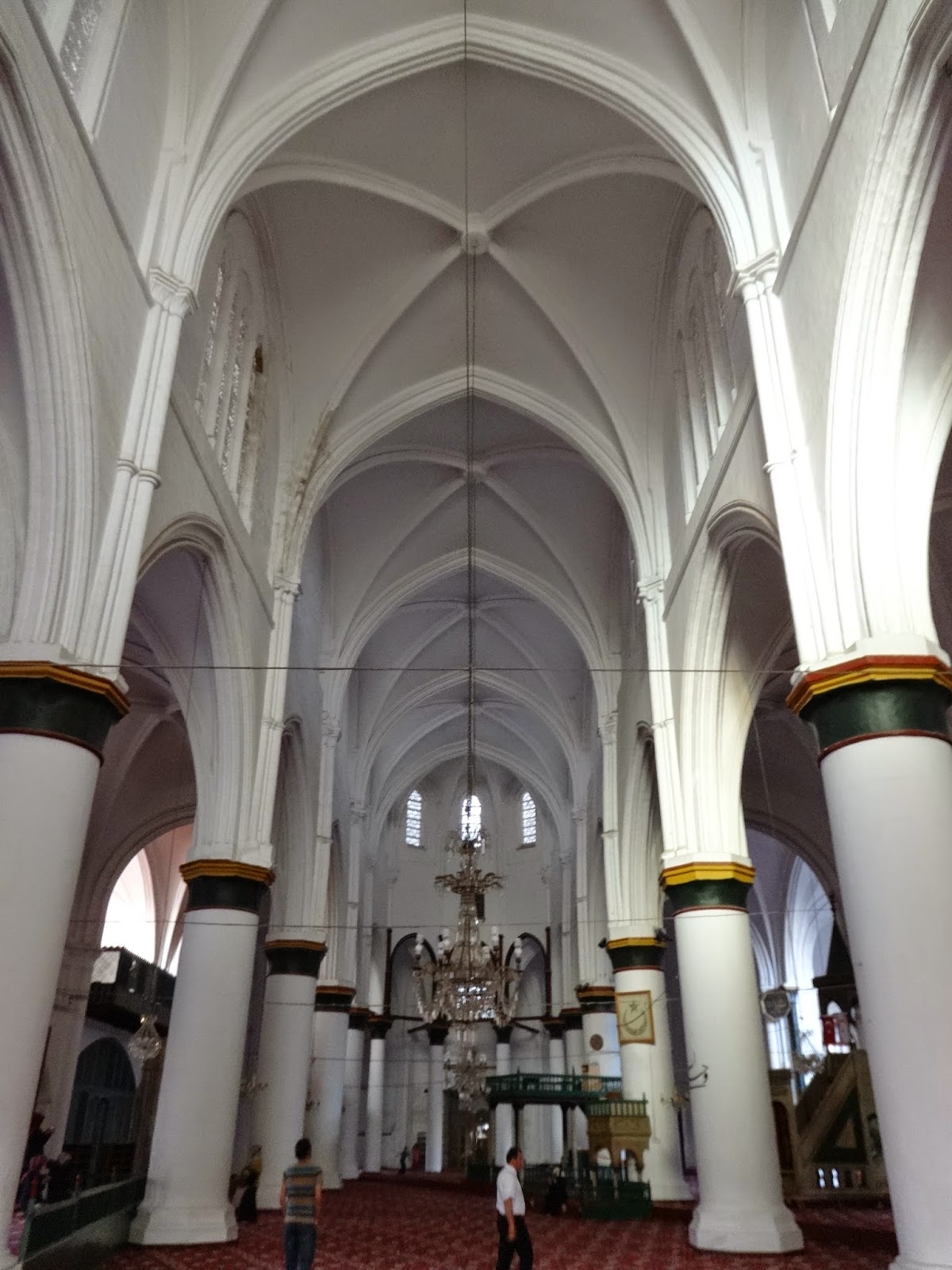 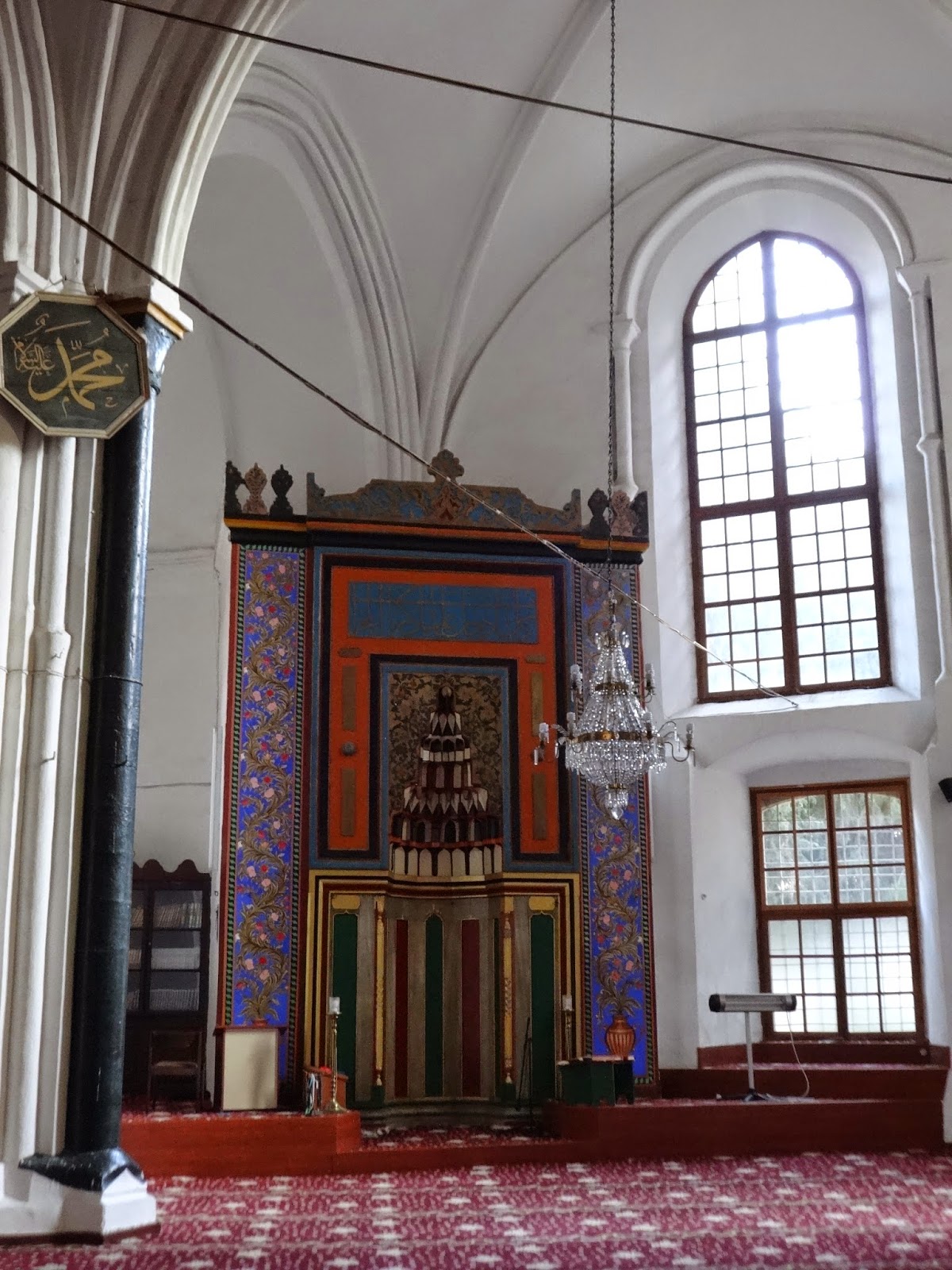 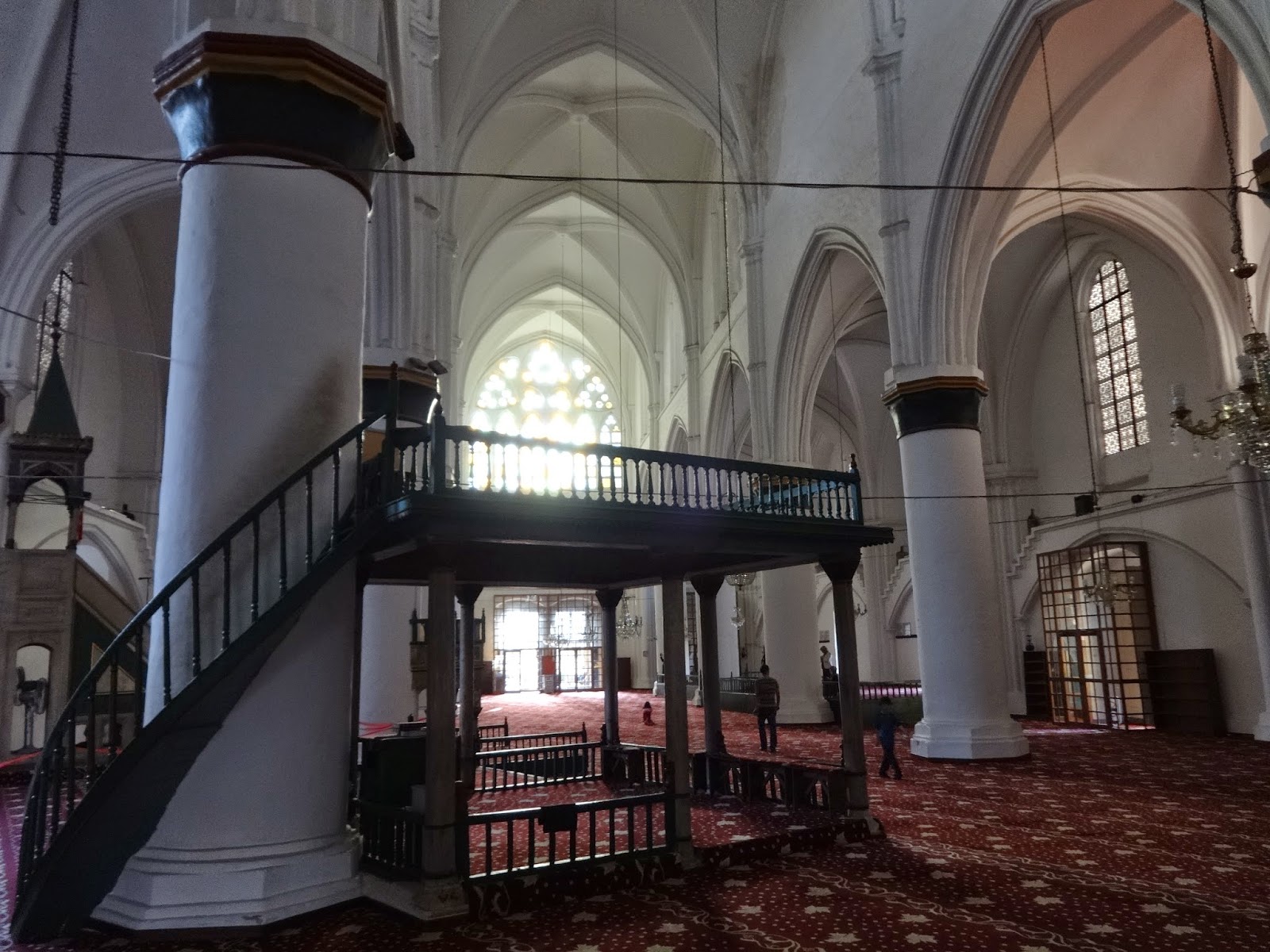 It was getting late by this point so we headed back over to the city's Greek side for Pete's official birthday dinner at an unofficial Chili's... 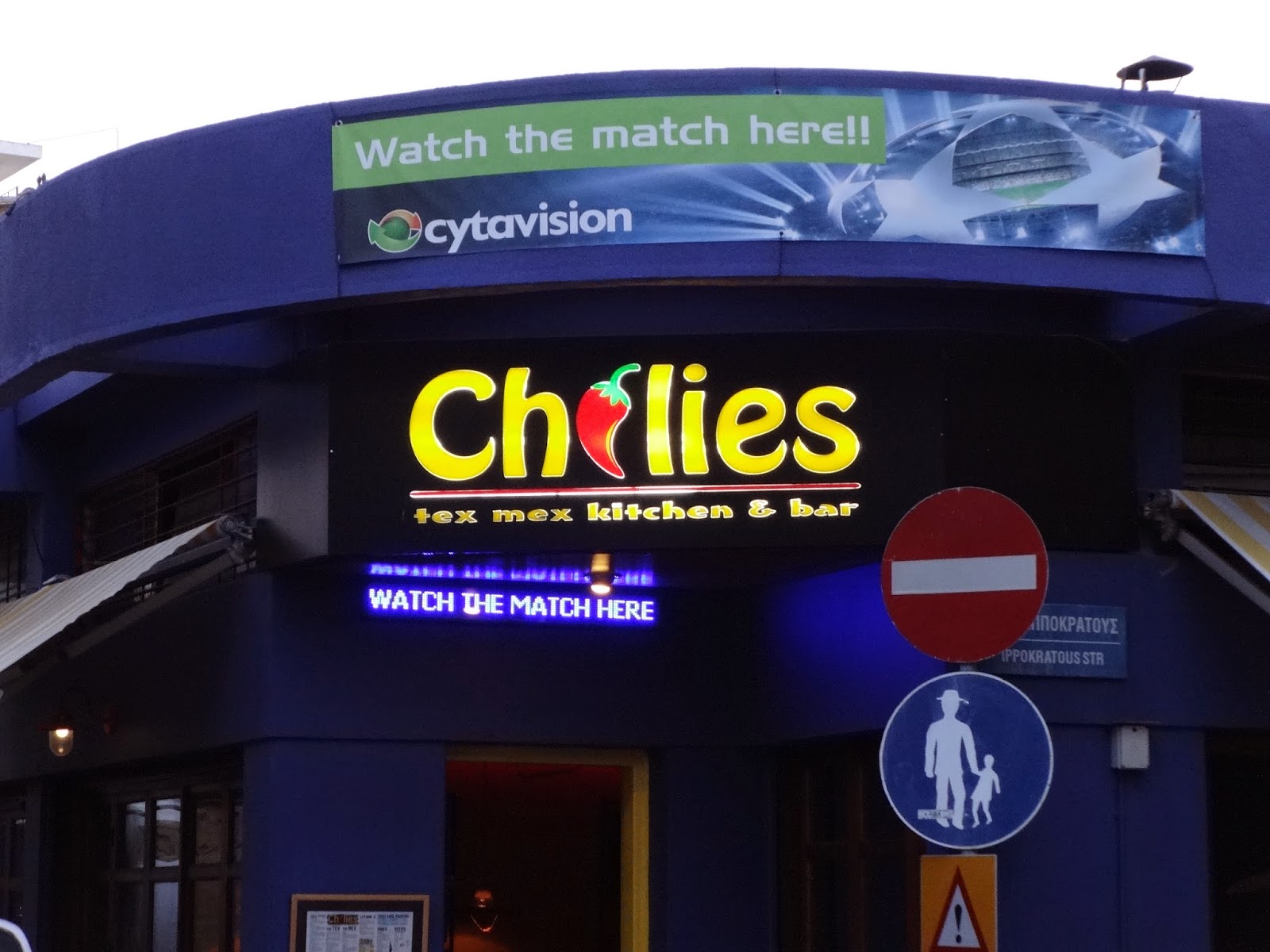 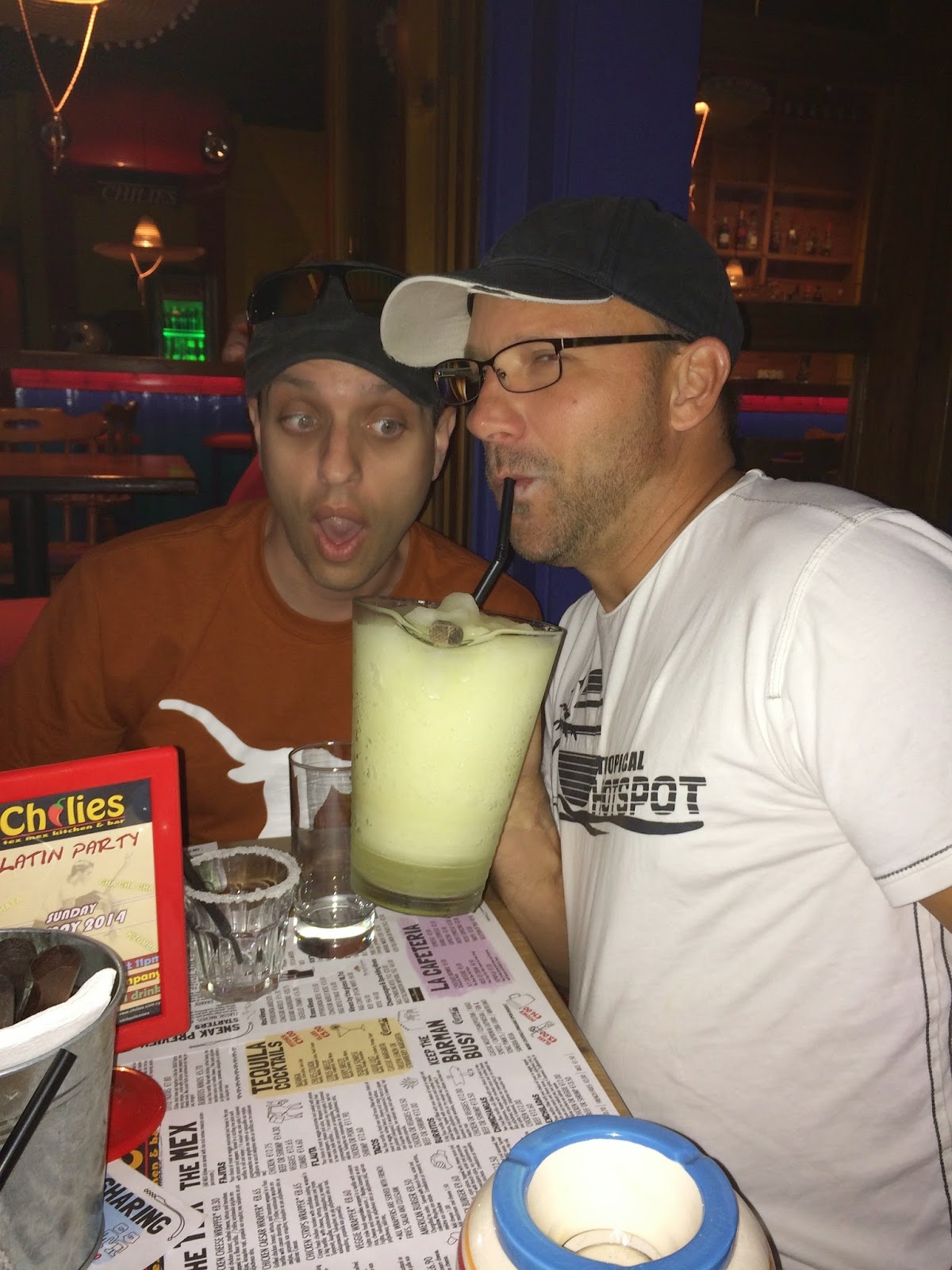 ...before heading back to Larnaca, where a night that began with margaritas at Chili's Chilies ended in a hazy hot mess sometime after this photo was taken at a club whose sole customer base seemed to be us and a group of old ladies that really liked to shake their groove thangs. 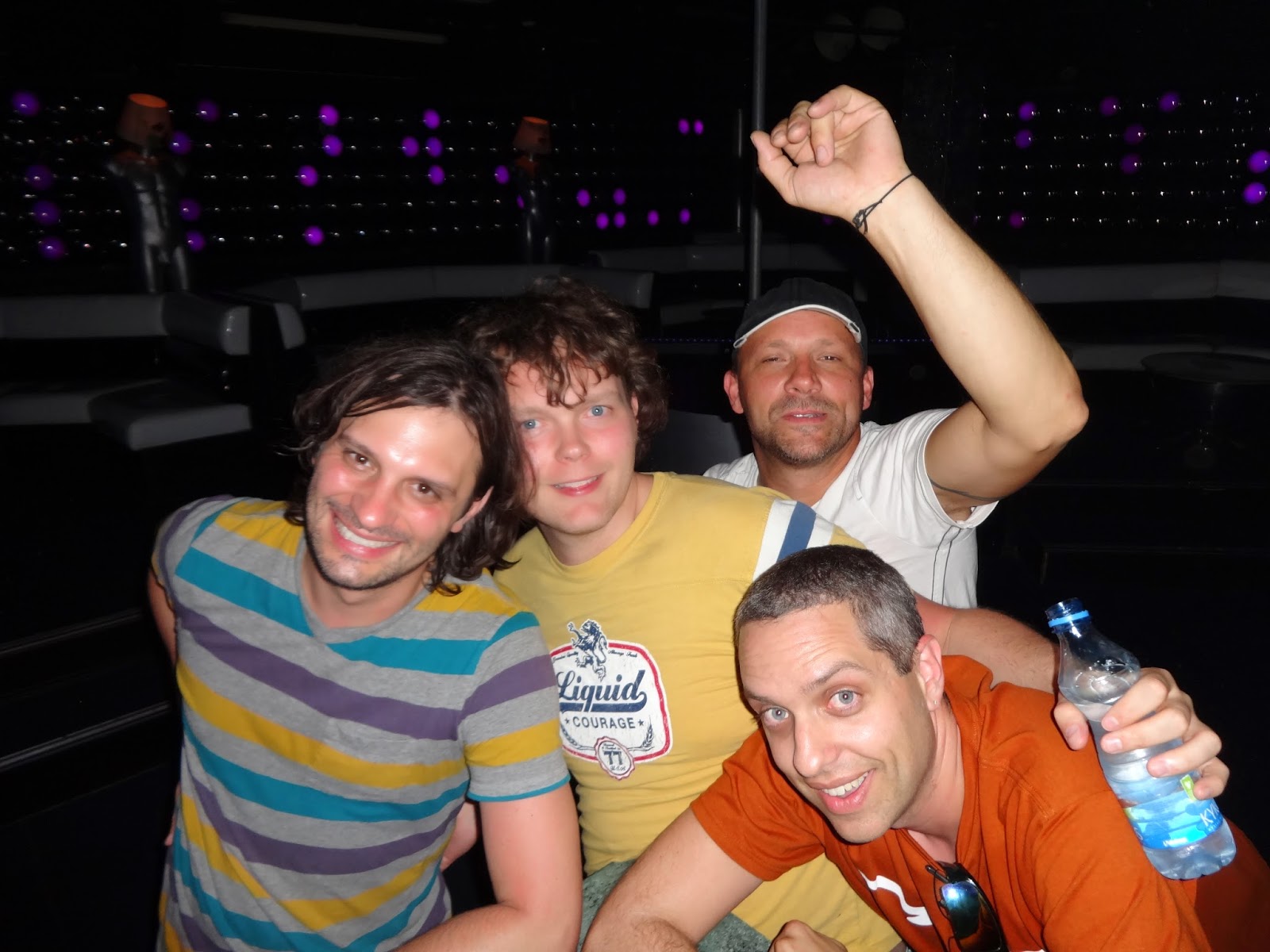 Due to excessive birthday-ing the night before, the morning of ship's departure was spent nursing a coffee at the only Starbucks in Larnaca and then slowly trudging up and down the beach...which ain't such a bad way to spend a morning.
Posted by Aaron at 11:37 AM