Setting Sail for Cyprus on the Good Ship "Dirty Princess"

Our friends Jacob and Pete invited us along for a weekend cruise (April 24-26) to Cyprus in honor of Pete's birthday that weekend.  Always looking for an excuse to get out of town, and no strangers to cruise life, we jumped at the chance.  Plus, it was a Groupon deal!

Annnd, we got what we paid for.

First of all, my absolute, deepest, most sincere apologies to the staff and crew of the Norwegian Jade.  I take it alllllll back.  We may sail the seas with you again after all.  I mean, you may have had your issues, but…damn.

Our troubles began almost immediately, with heavy traffic and poor (ok, no) signage indicating where the dock was or where one should park leading us to seriously wonder if we would even make the boarding deadline.  When we finally pulled into port and asked where we could park, we were directed up a ramp, past a security gate, and into a small parking lot that said "No Parking."  We headed back down the ramp, back through the security gate, and out onto the street again.

Finding what looked like an official, but not exactly secure, parking lot, we headed the wrong way down a one way road (because it was, somehow, the only road) and miraculously found a parking spot without having an accident.  Luggage in tow, we scurried on foot back up the ramp, back passed the security gate, and into the terminal where we found Jacob and Pete, who had experienced similar frustrations yet somehow managed to gain access to the free staff parking lot (Um. Whaaa???).  Each couple would spend the entire trip casually wondering if our cars would be found where we had left them.  (Spoiler alert:  Cars were fine.)

The check-in process abided by standard cruise line practices, with one major exception:  they confiscated our passports!  Apparently, there is concern that the clientele will use the boat as an opportunity to exit Israel and then run away.  Or something.  We hemmed and hawed over this for a while, but ultimately, as we all carry two passports anyway, let them win the battle and continued the boarding process.

Against all odds, we managed to board the ship, locate our rooms, and do a bit of exploring before the ship set sail. 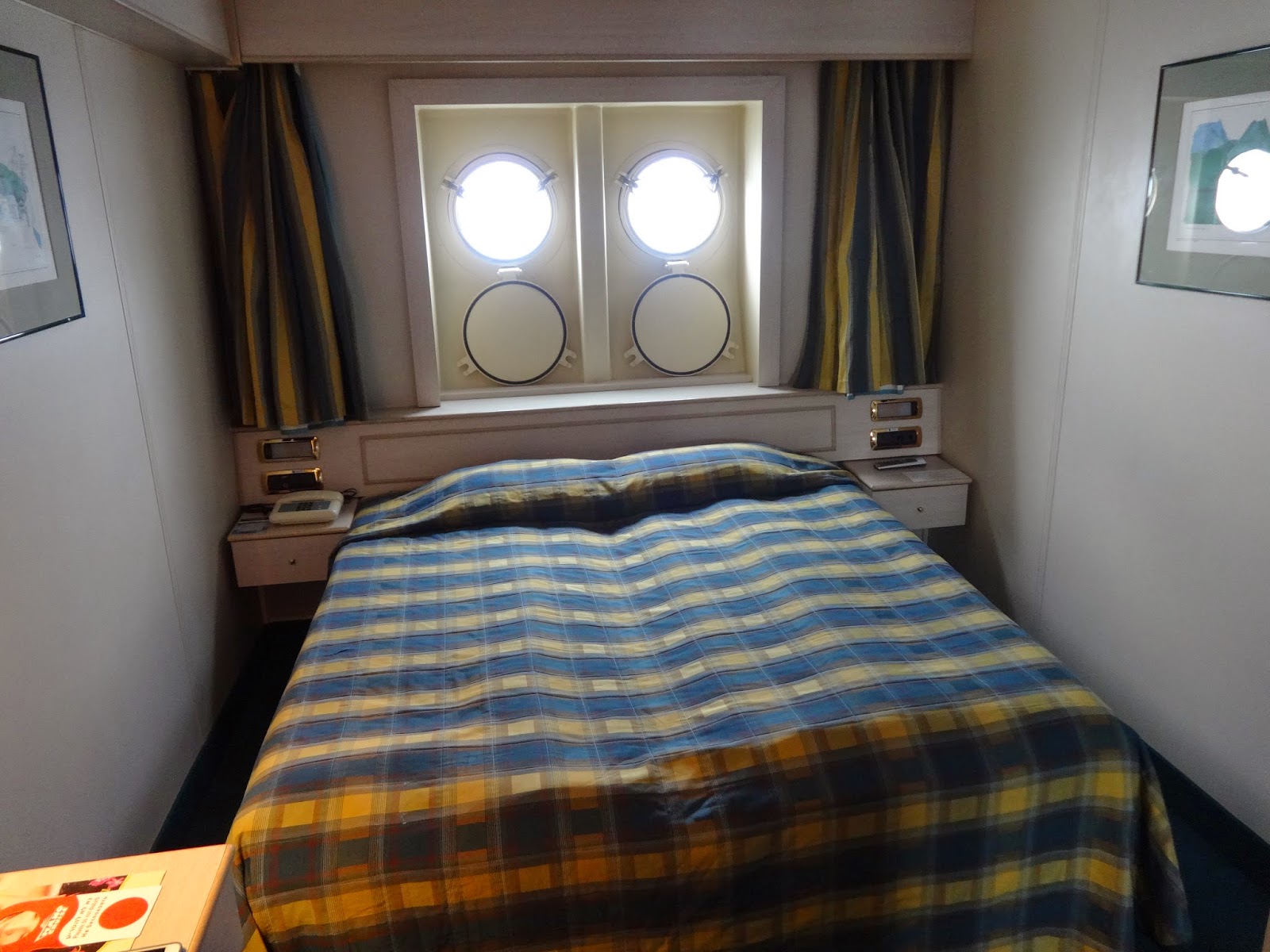 They earn bonus points for already having the beds put together.  We've always had to request this after arrival on other cruise lines. 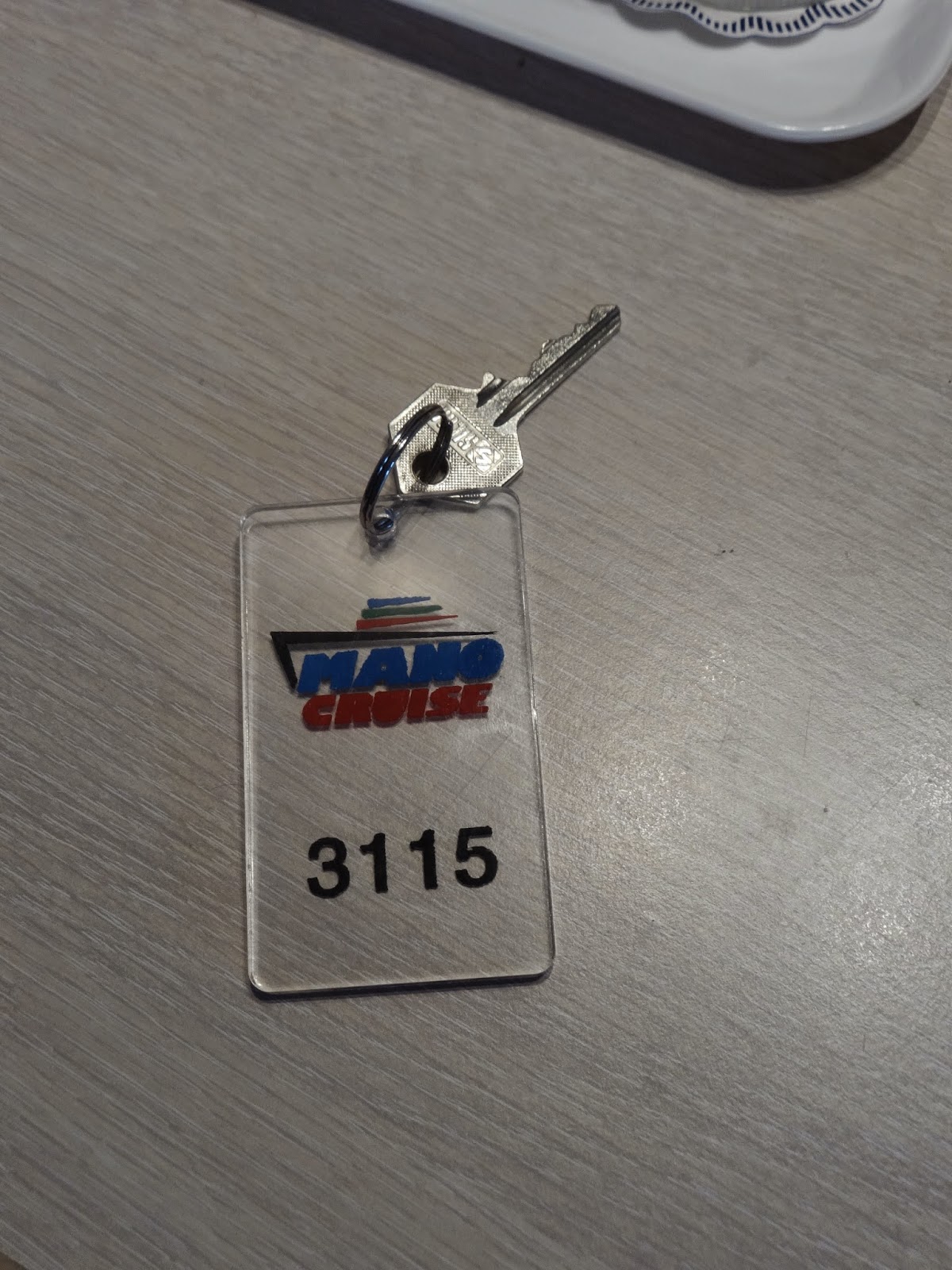 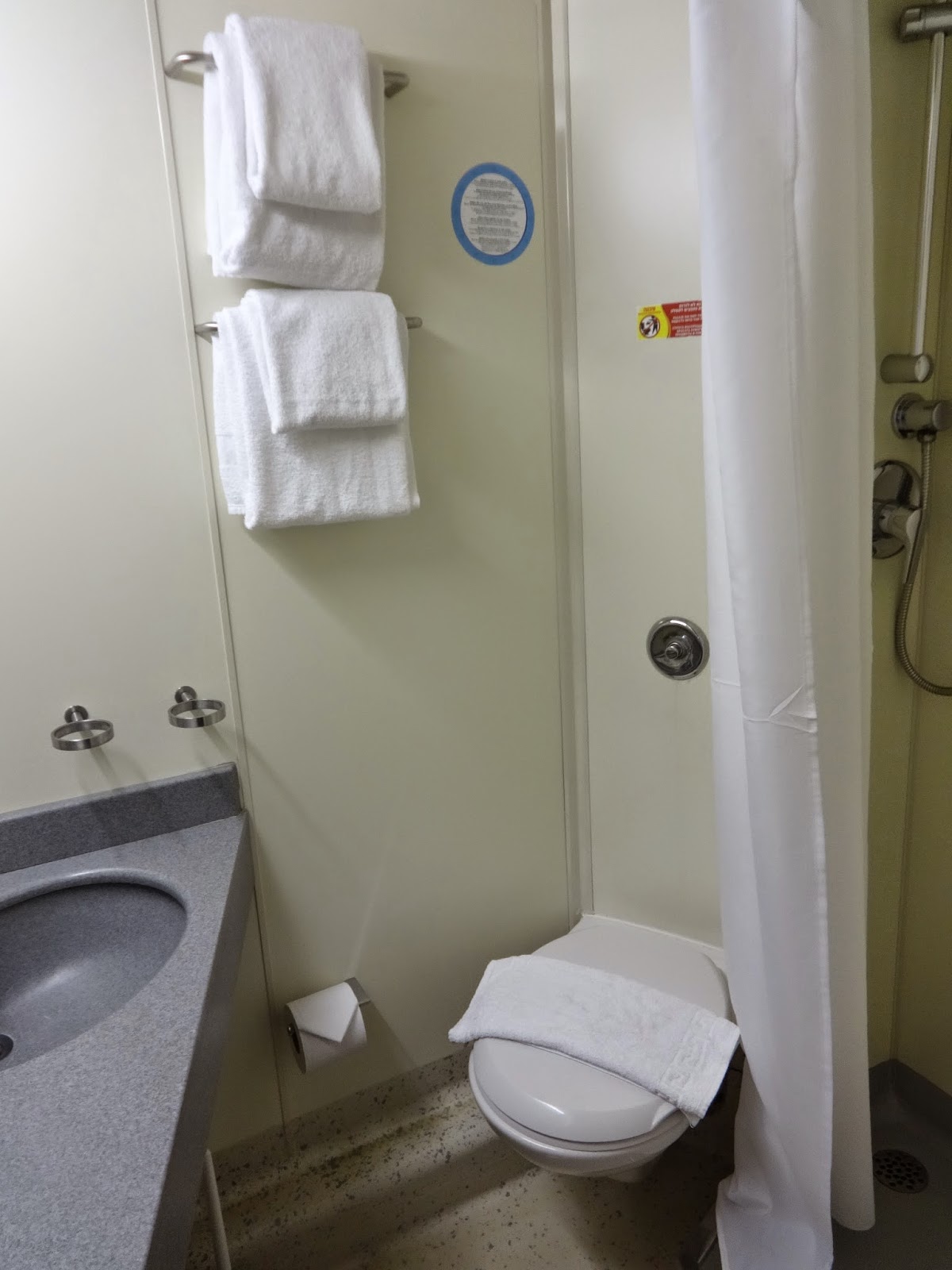 But they lose those points for having an actual key that we had to lug around instead of a key card.
They also lose points for the tiny bathroom that practically required me to put one foot in the toilet in order to take a shower.

In the ship's lobby (which, to give you an idea of just how small this boat is, here's a picture of said lobby), we found several large museum-style labels printed on the finest cardboard.  They told of the ship's storied past. 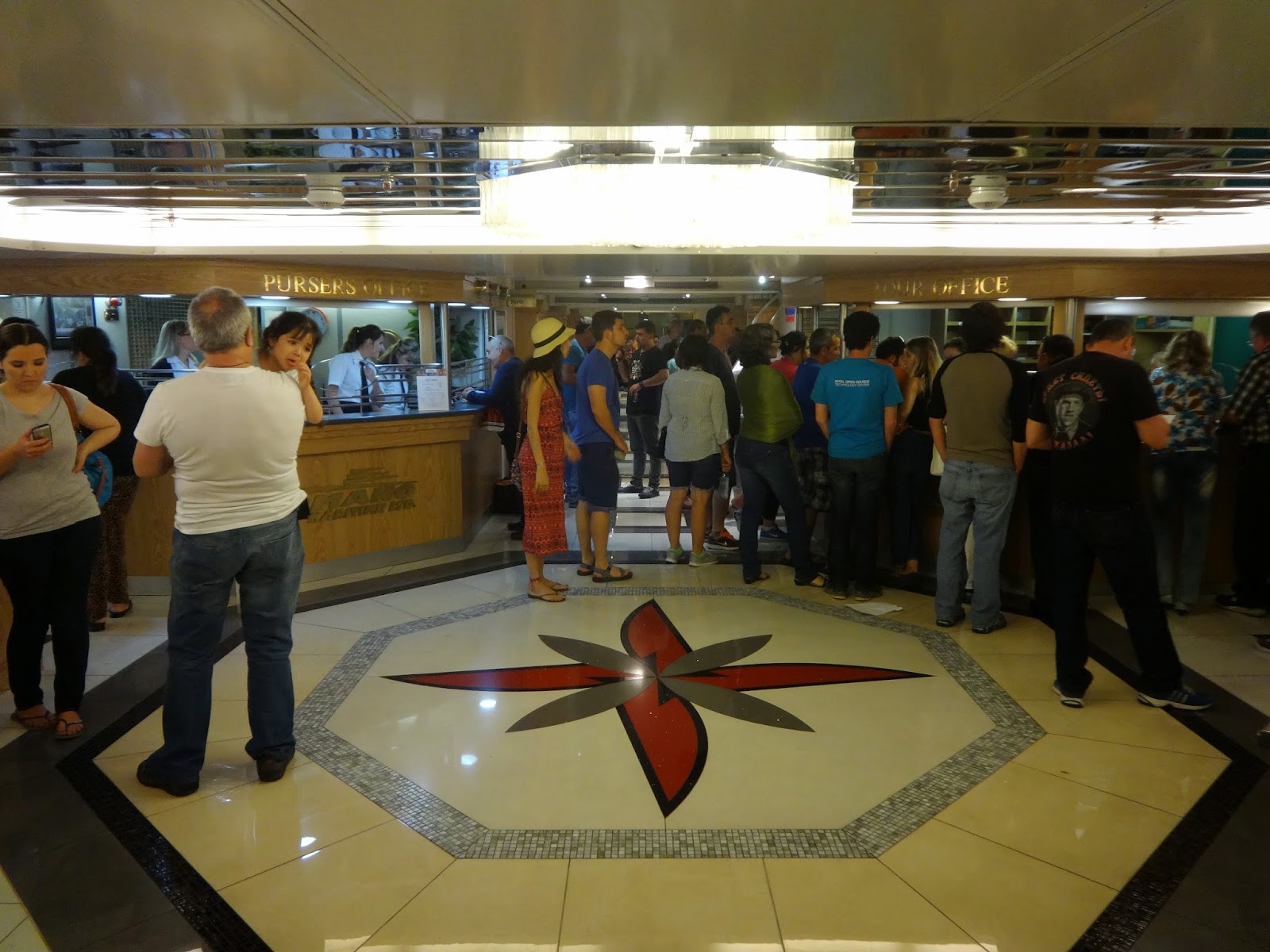 The ship was commissioned by U.S.  Overseas National Airways as one of two luxury cruise ships.  Hugh Hefner was a partner in the design process, and he used Playboy's Entertainment and Recreation Club cruise ship as a style reference.  So, yeah, you know it's classy.  While under construction, the ship was acquired by Cunard Line  (You've heard of the Queen Elizabeth?).  The new owners decided to maintain the informal design begun by Hefner, and the ship was christened the Cunard Princess by Monaco's Princess Grace.  Although its maiden voyage saw it setting sail from New York to the Caribbean, the ship's primary cruising routes took it through coastal Europe and Central America.

Later acquired by Star Lauro and rechristened the Rhapsody, the ship added Africa to its itinerary.

Mano Maritime took over management of the ship in 2009, at which point she received her current name, The Golden Iris.  The ship now offers cruises throughout the Mediterranean that depart from Israel's Port of Haifa.

By the end of the weekend, the ship received another name: the Dirty Princess.  The ship was awarded this illustrious name for a number of reasons, chief among them:


As the ship set sail, we found ourselves enjoying drinks on the Lido deck as the ship's entertainment team danced awkwardly for our enjoyment.  This occurred shortly after, regulations put in place by the International Convention for the Safety of Life at Sea to the contrary, we somehow managed to not get sent to a muster drill.  We asked several crewmembers where we should go, and they told us they didn't know, but wouldn't let us attend their muster.  We sat in the bar, alongside several other passengers, as numerous crew members walked by, noticing we weren't at muster but also not caring. 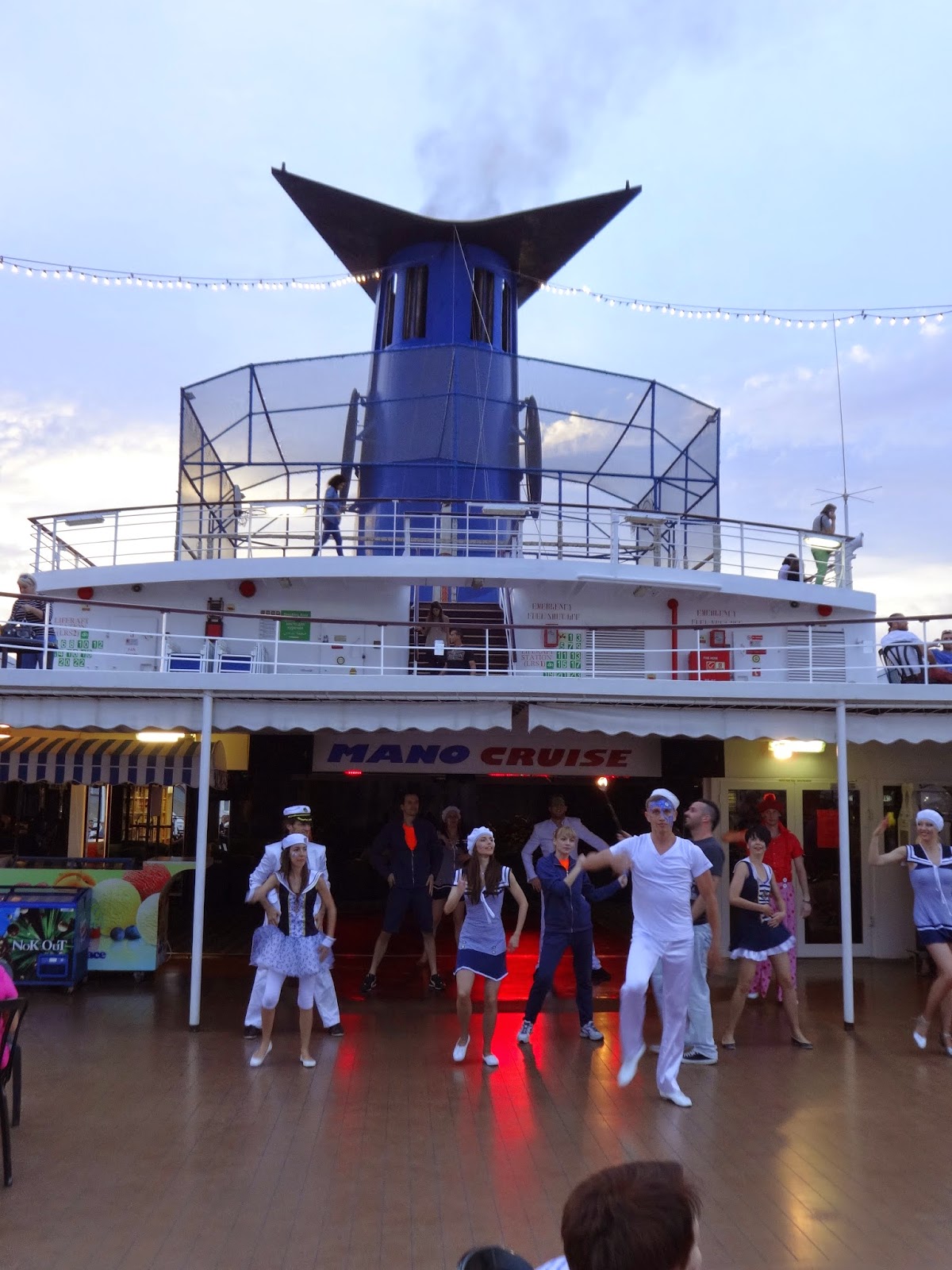 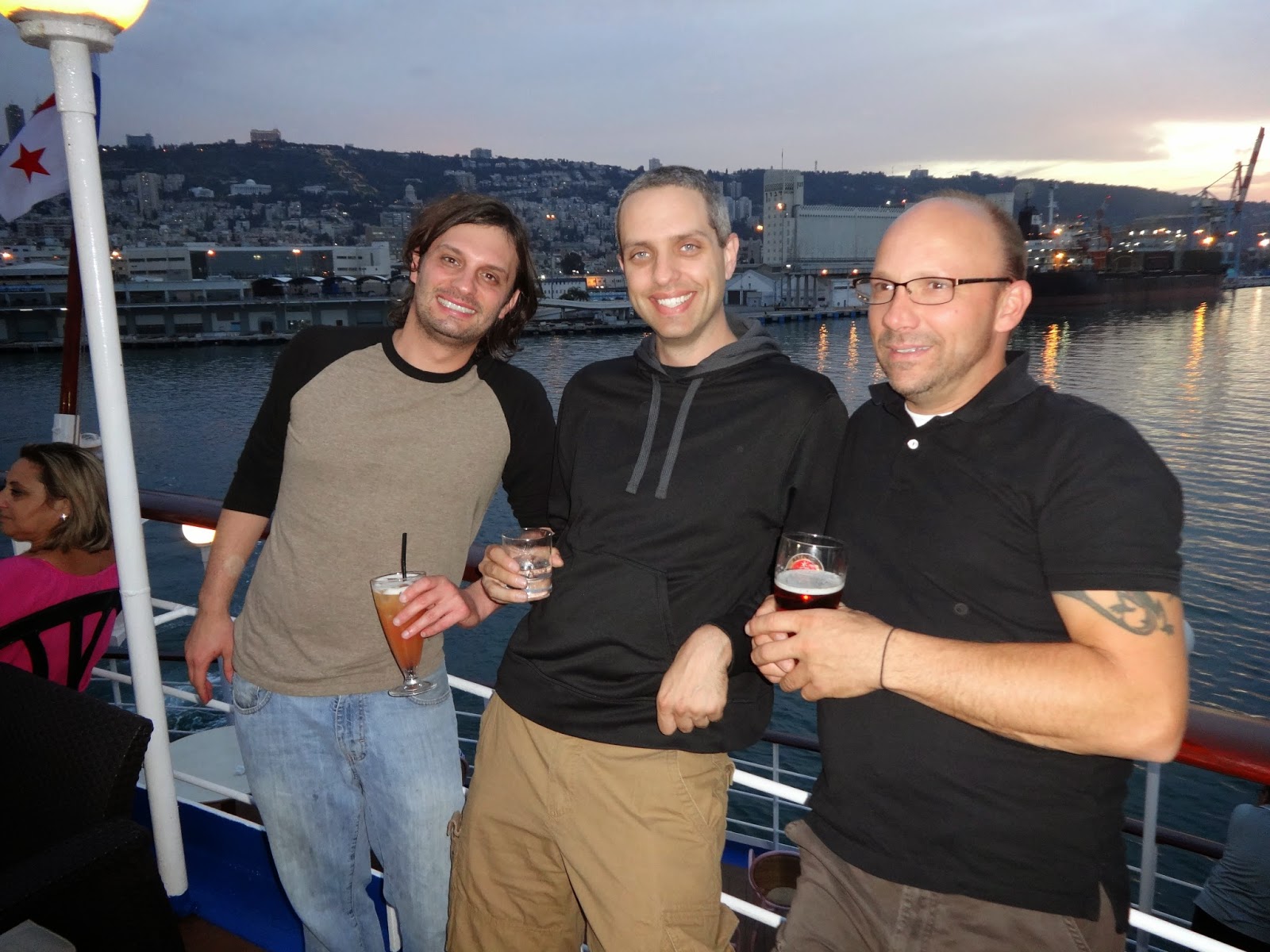 The awkward dancing would continue each night as the entertainment crew put on what passed for an evening show.  Bless their hearts, they danced their hearts out, but with the low ceiling only a couple of feet above their heads, there wasn't much wiggle room for dynamic choreography.  I did have a major crush on the male vocalist (he's wearing that Miami Vice looking outfit in the pic below), so in my mind he could do no wrong.  My travel partners assure me he couldn't really sing, though.  Haters. 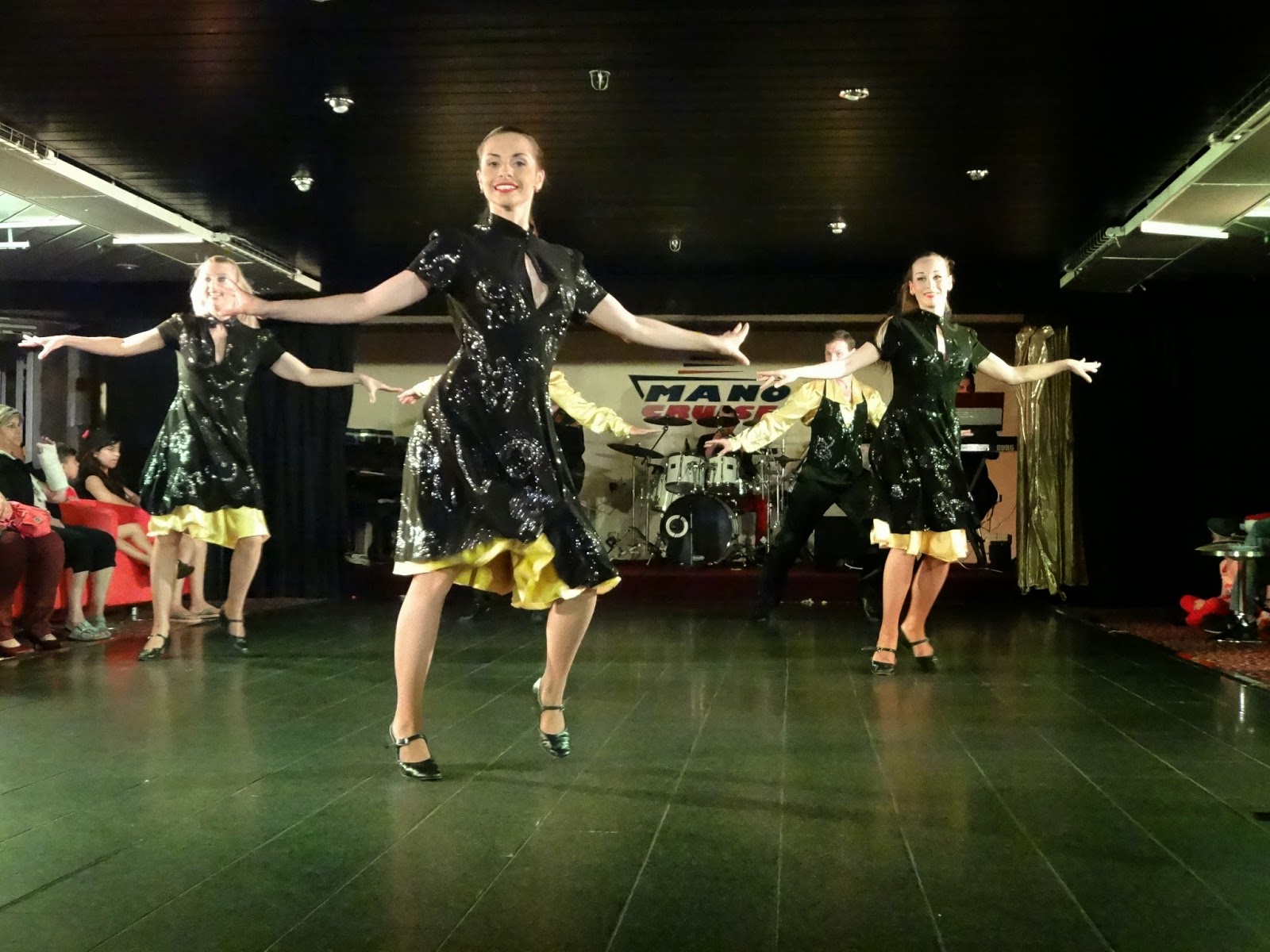 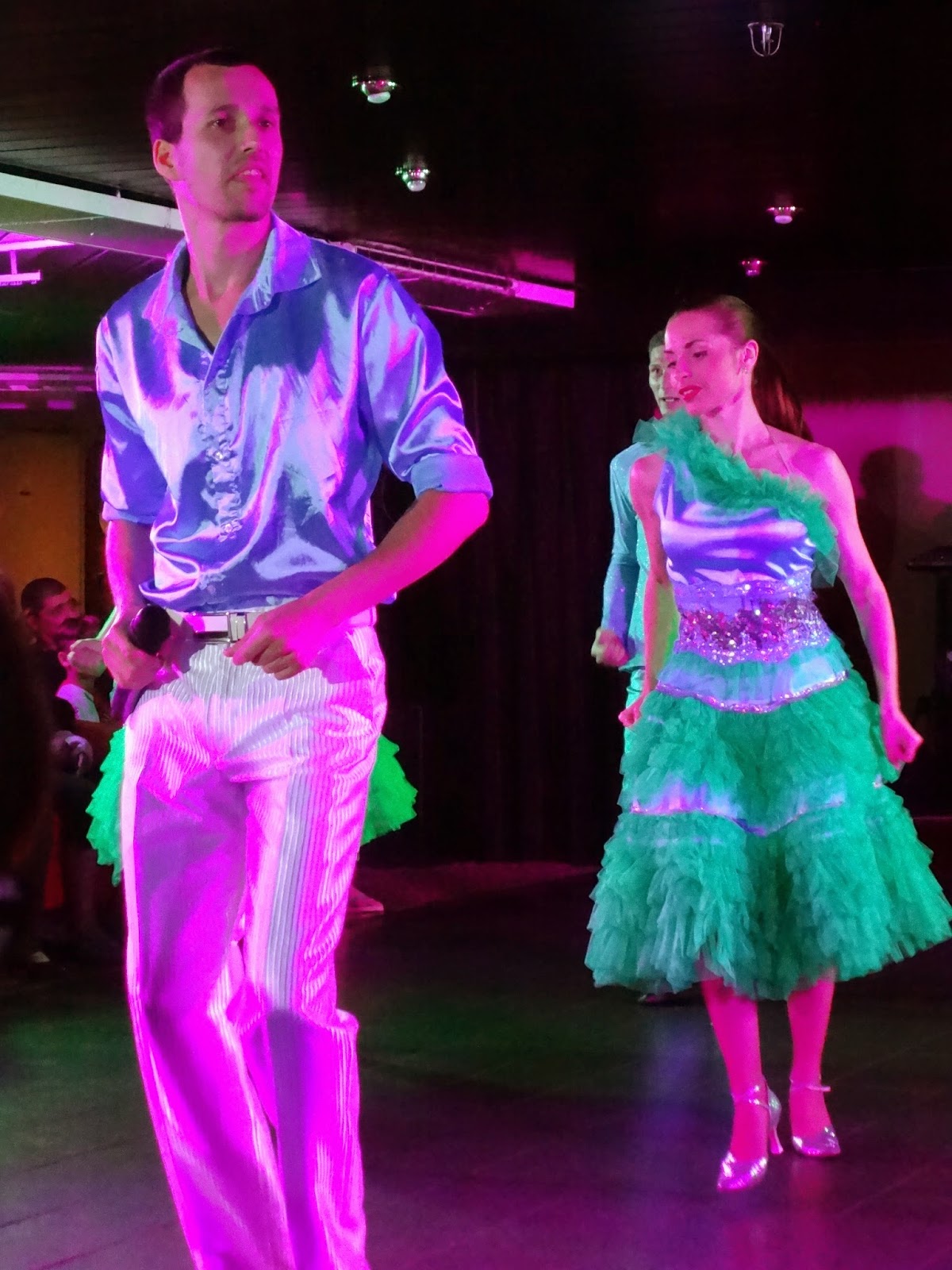 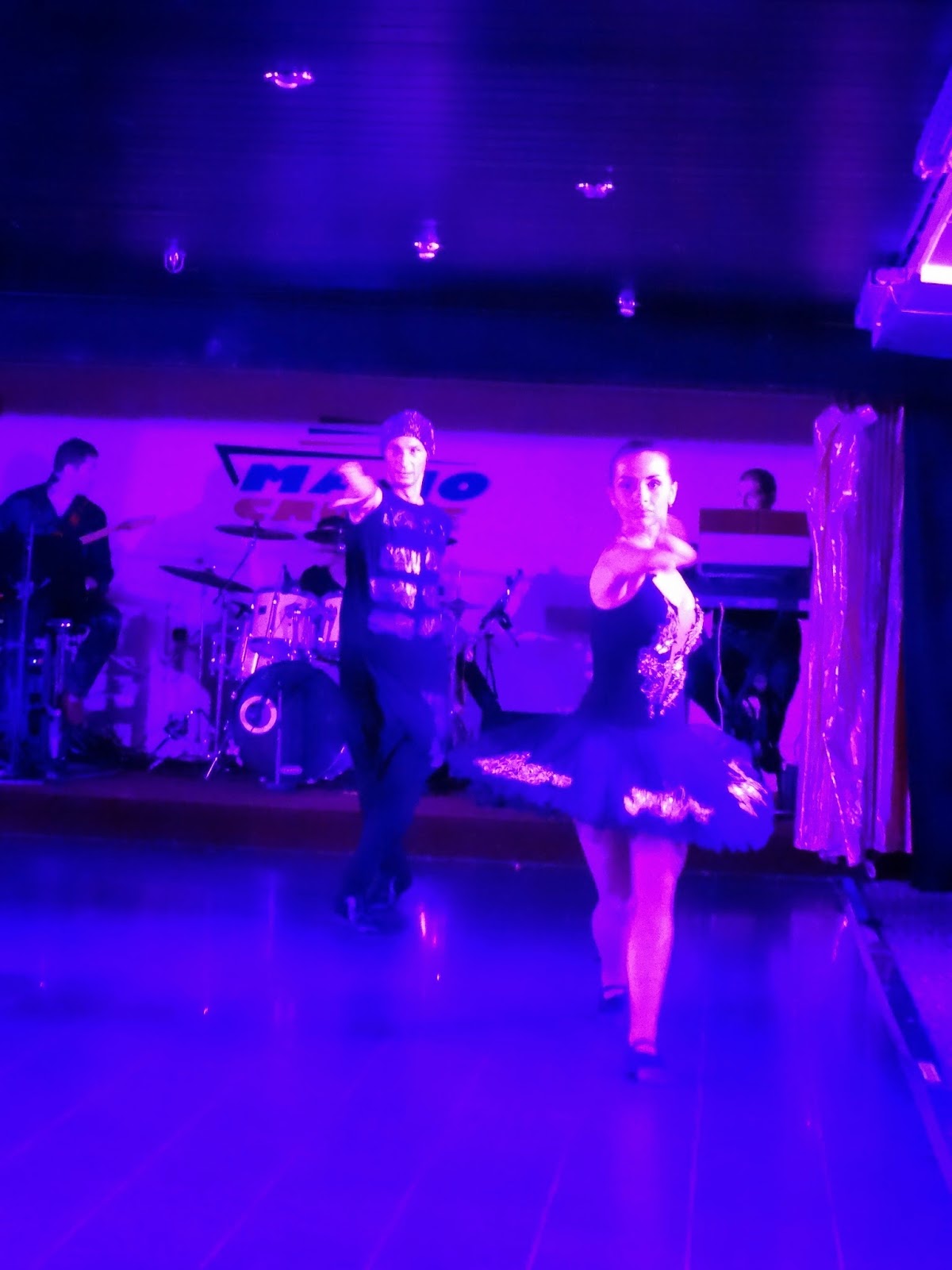 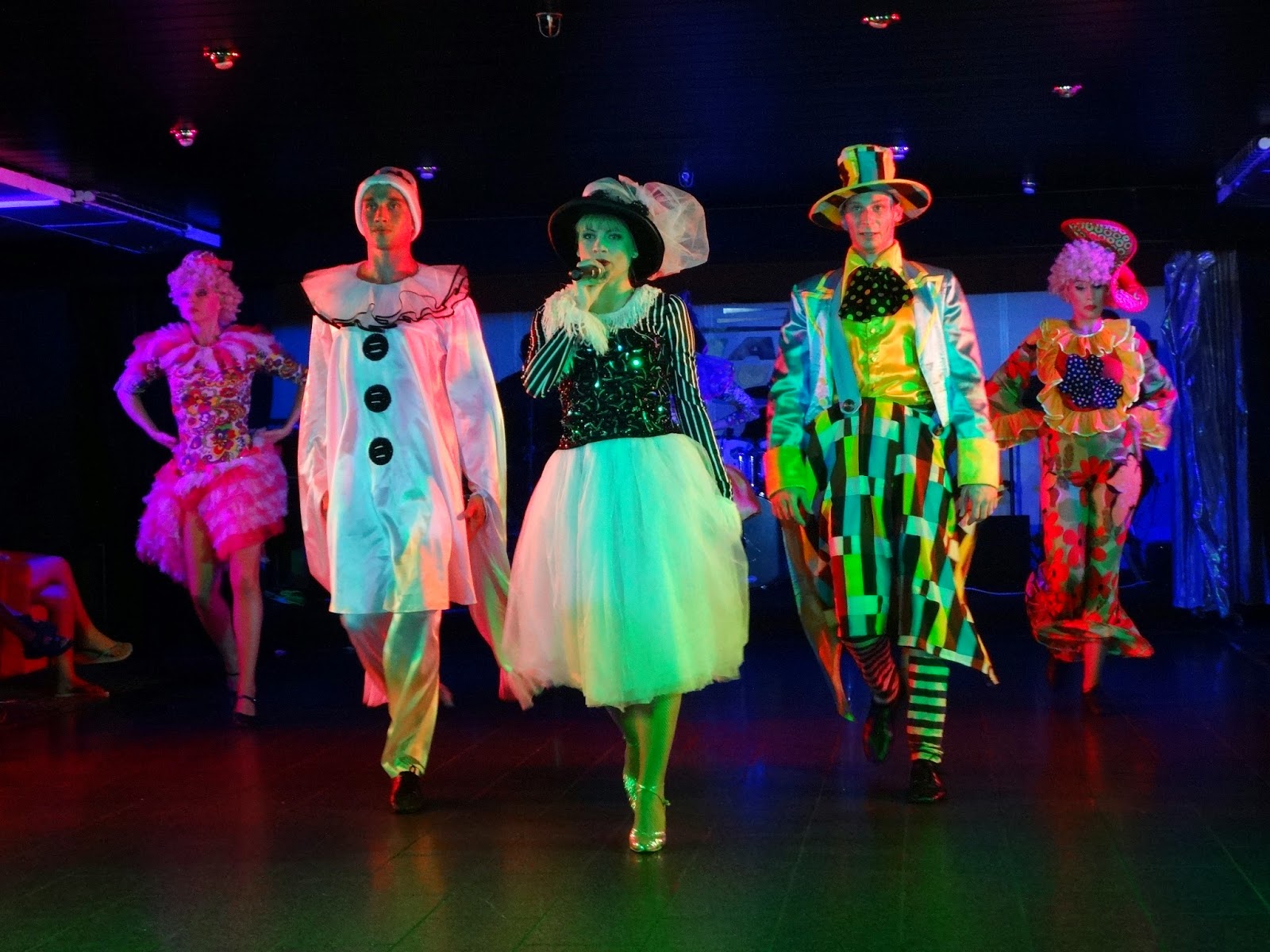 Speaking of awkward singing, TJ tried his hand at Katy Perry's "I Kissed A Girl" during afternoon karaoke.  Being the conservative, family cruise that this was, heads exploded all over the place.

If you're familiar with Carnival, Disney, Norwegian, Royal Caribbean, or any other large chain, you'll be appalled to learn that meals were only served at strictly scheduled times during this cruise.  If you're late, you're out of luck.  It was all buffet-style, and our fellow diners attacked the buffet as if it contained the last bit of food on Earth.

Aside from the aforementioned singing and dancing, there was no entertainment on board.  Days that would normally be spent playing miniature golf, participating in trivia contests, or learning how to fold towels into various animal shapes could only be filled with alcohol and a poolside lounge chair.  That bit turned out to be not so bad.

The most frustrating part about the voyage was that nothing about ship activities, port arrivals/departures, or dining options was easily obtained in English.  On every other cruise ship I've been on, they determine your language needs and deliver the appropriate material to your cabin.  Here, everyone received Hebrew reading material.  One had to go to the lobby and ask for materials in English.  And you had to specifically ask for them in English because just asking for the items IN English was never clue enough for the staff.

That's not to say we didn't have a heck of a lot of fun, because we did.  We absolutely did.  The ship experience itself was so bizarrely terrible that it was campy.  And we do love camp.   Pete and Jacob had never been on a cruise ship before.  I'm not sure what they thought of the whole experience, but they did keep asking "Is it like this on every cruise ship?"...so I assume we were all on the same page.  Oh, and Cyprus itself was a lot of fun.  I'll talk about that next time.  No need in sullying the joy of Cyprus in this long and probably boring boat critique.

When time finally came to disembark, instructions were given, only in Hebrew, as to how one could reclaim one's passport.  Due to this, we found ourselves being ushered off of the boat and into Passport Control...without our passports.  We turned to go back to the boat and were told by crew members that we could not return to the boat.  I said "Oh, I'm going back to the boat," and because everything was mismanaged all to hell anyway, that was apparently sufficient authority to get back on.  We found our passports at the front desk.  While disembarking for the second time, we ran into a member of the crew who had taken a liking to us after helping herself to Pete's M&M's the day before.  We suggested that it would be helpful to provide the appropriate information to guests that speak other languages so as to make their journey more pleasurable.

I'm sure she'll get right on it. 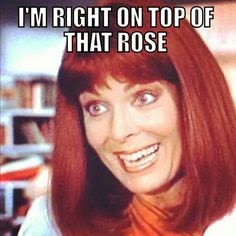