Last time, I regaled you with tales of all of the theatre productions we saw while visiting London for R&R back in August/September.  This time, we will be discussing London itself.

We arrived in London on the afternoon of August 29th in much the same fashion as I had during my two layovers while traveling to and from Comic Con in July:  Namely, our friend Anwarul was 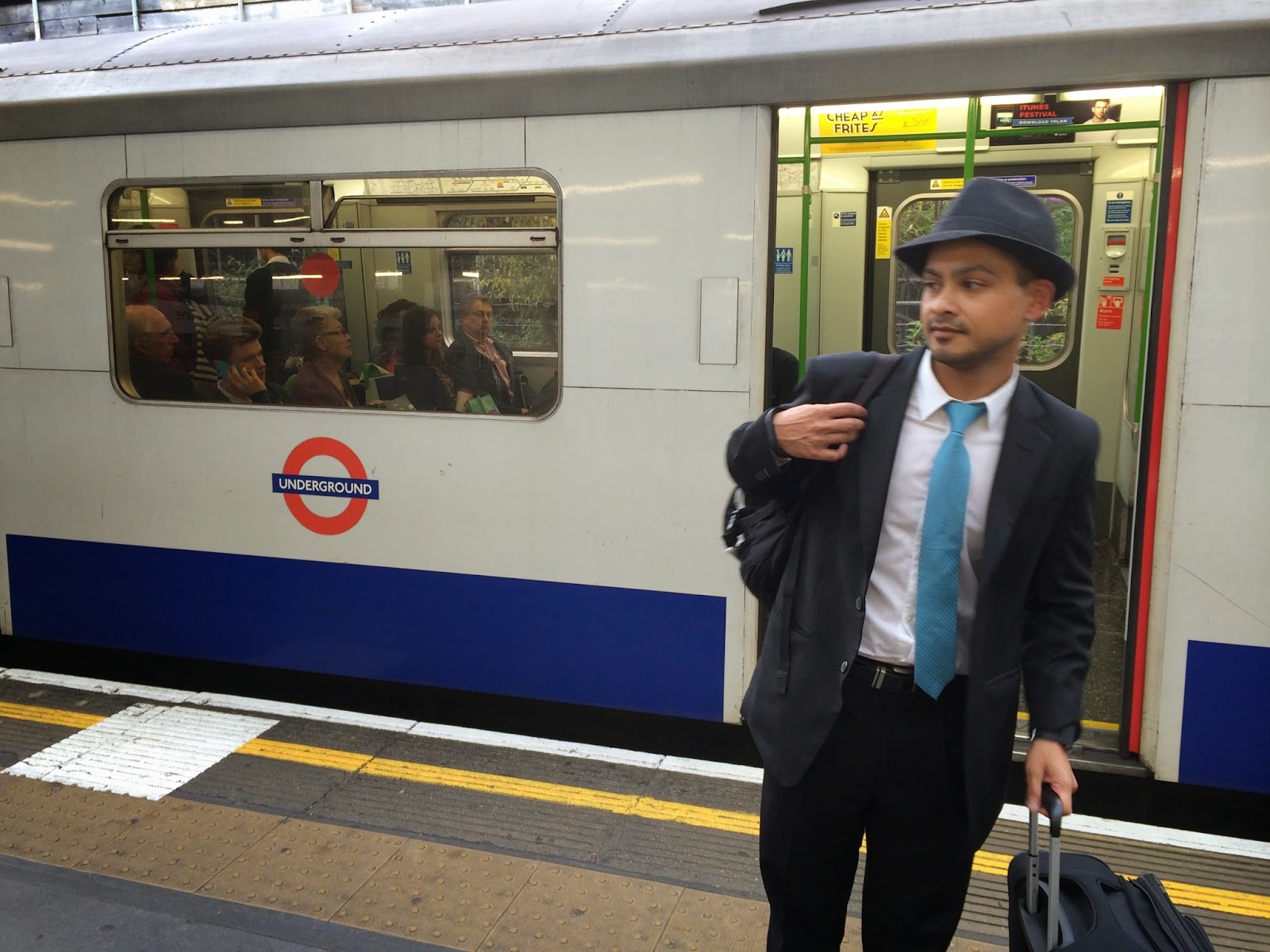 waiting at the airport to play the role of host, travel buddy, dining companion, vacation planner, and tour guide.

When planning this two week vacation, TJ and I opted to stay in a London-based hotel during the first week, when our focus would be on absorbing the sights, sounds, and flavors of London.  We found a place that was located within five minutes walking distance of two different train lines, ensuring that we had quick and easy access to anywhere in the city.

During the second week, we used Anwarul's home in neighboring Henley-on-Thames as our base of operation for traveling to various other places both near and far.   Today, though, is all about London.

All told, we spent seven days and eight nights in London.  This was a trip that I had been anticipating for 11 years;  I hold fond memories of my time in London during a summer 2001 study abroad trip, and had always wanted to recreate that magic with TJ.

I won't bore you with the play by play, but here are some of the most memorable highlights.

Westminster Abbey only received a drive-by nod from us, as the line was long and we had a tour scheduled at Parliament that made the timing tricky.  Instead, we opted for coffee and a brisk walk around the neighborhood, both of which were enjoyable.  The Abbey is one of the most notable religious buildings in the United Kingdom and has been the traditional place of coronation and burial for English and British monarchs.  The Abbey is that in name only; it has been a "Royal Peculiar" since 1560 - exempt from the jurisdiction of the diocese and instead subject to the direct jurisdiction of the monarch. 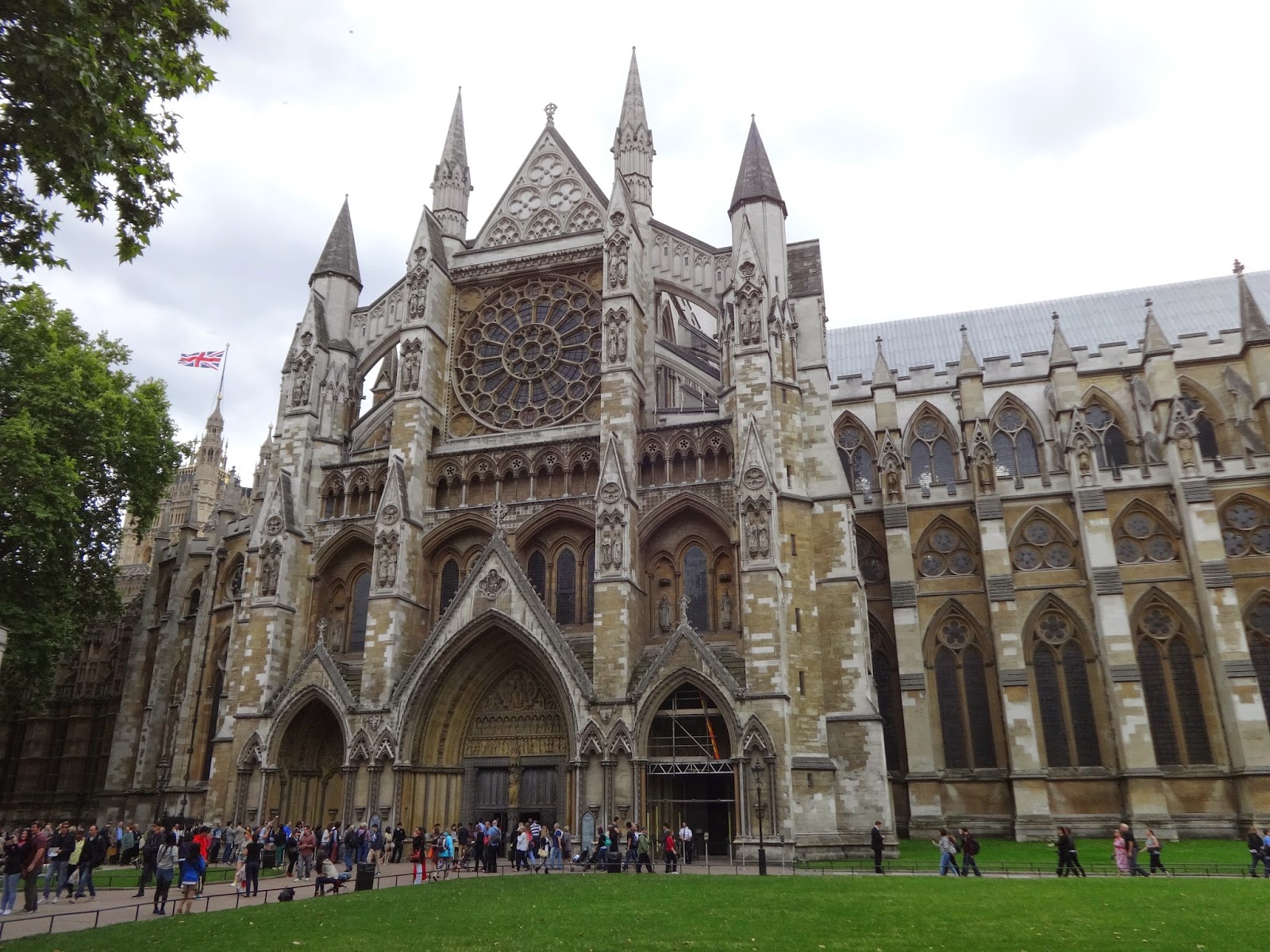 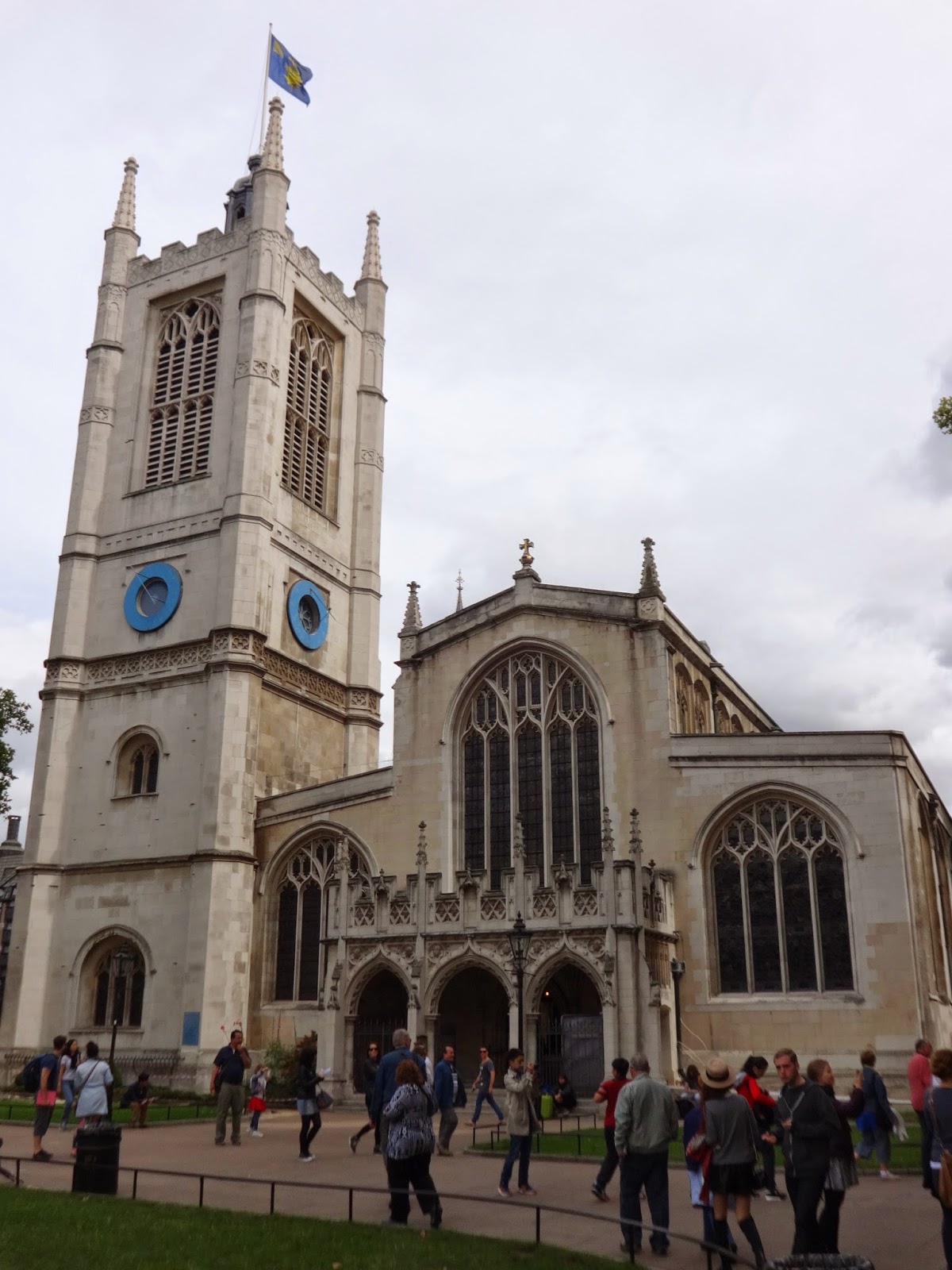 Sharing a courtyard with the Abbey is Saint Margaret's Cathedral, which we did enter due to the lack of line and entry fee.  The present building, consecrated in 1523, is the third on the site.  It has been the church of the House of Commons since 1614.  Raleigh is buried in the front altar, under the glorious window made for King Henry VIII and Catherine of Aragon.  Other windows commemorate Caxton and Milton, who worshipped there.  Saint Margaret's Cathedral joined was inscribed onto the list of UNESCO World Heritage Sites in 1987, alongside Westminster Abbey and The Palace of Westminster/The Houses of Parliament. 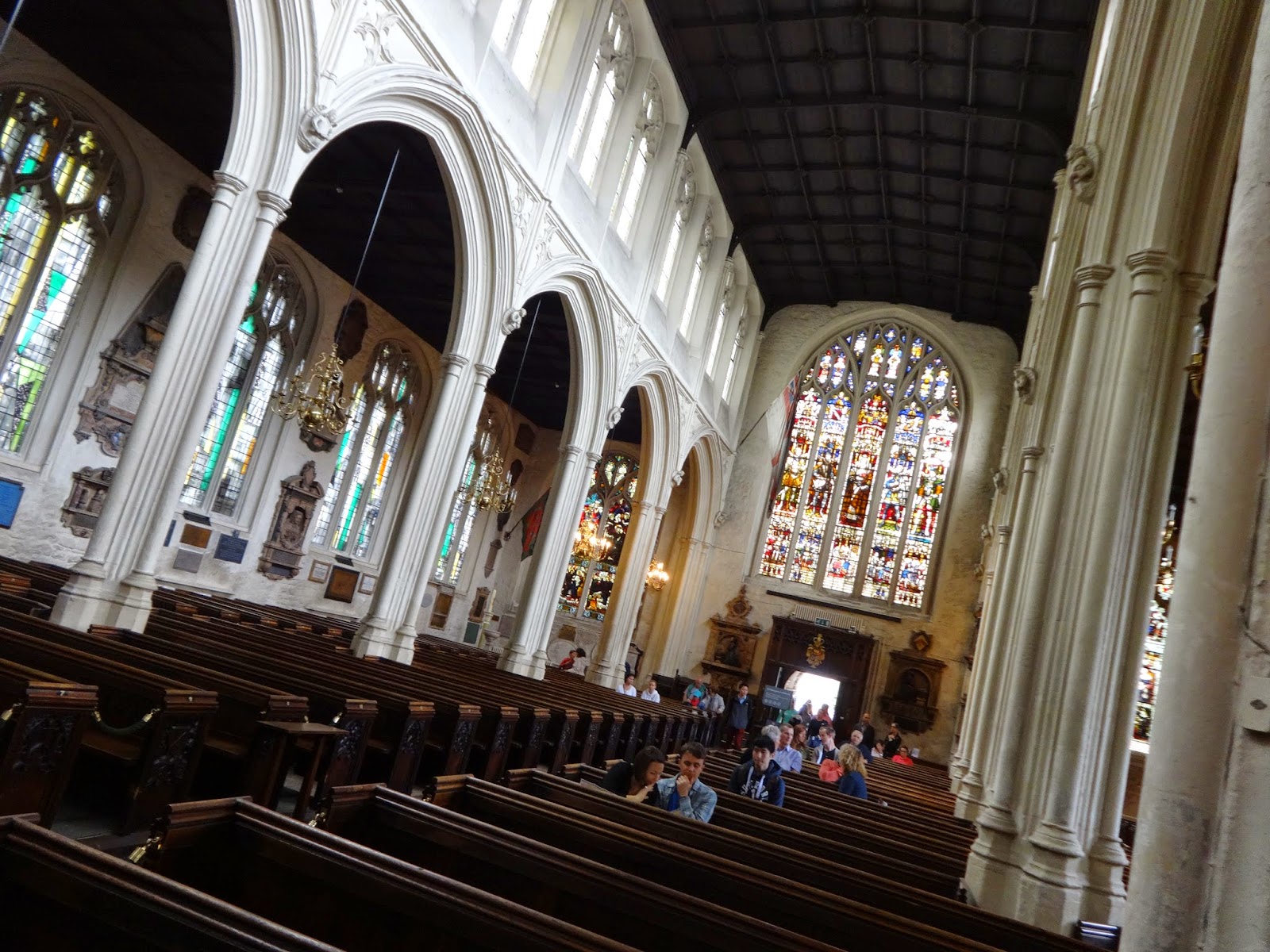 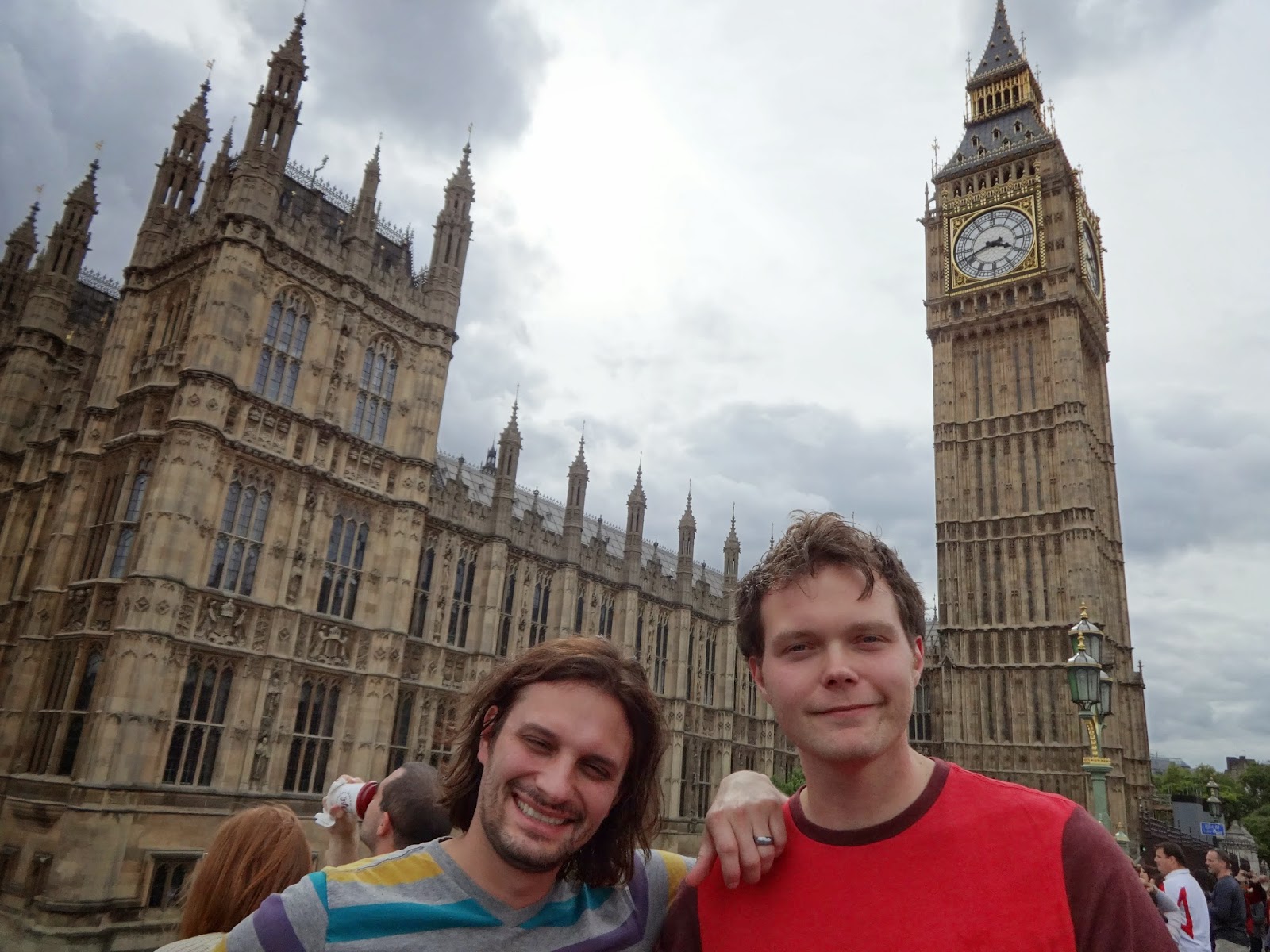 The Palace of Westminster, located just across the street from Westminster Abbey, is home to the United Kingdom Parliament.  It has been a royal palace for some 1,000 years and home to Parliament for almost 500.  The palace was originally home to the Kings and Queens of England but, as Parliament evolved and grew in importance, the Palace transitioned into more of a meeting ground for politicians.  It became their official, permanent home in 1550. 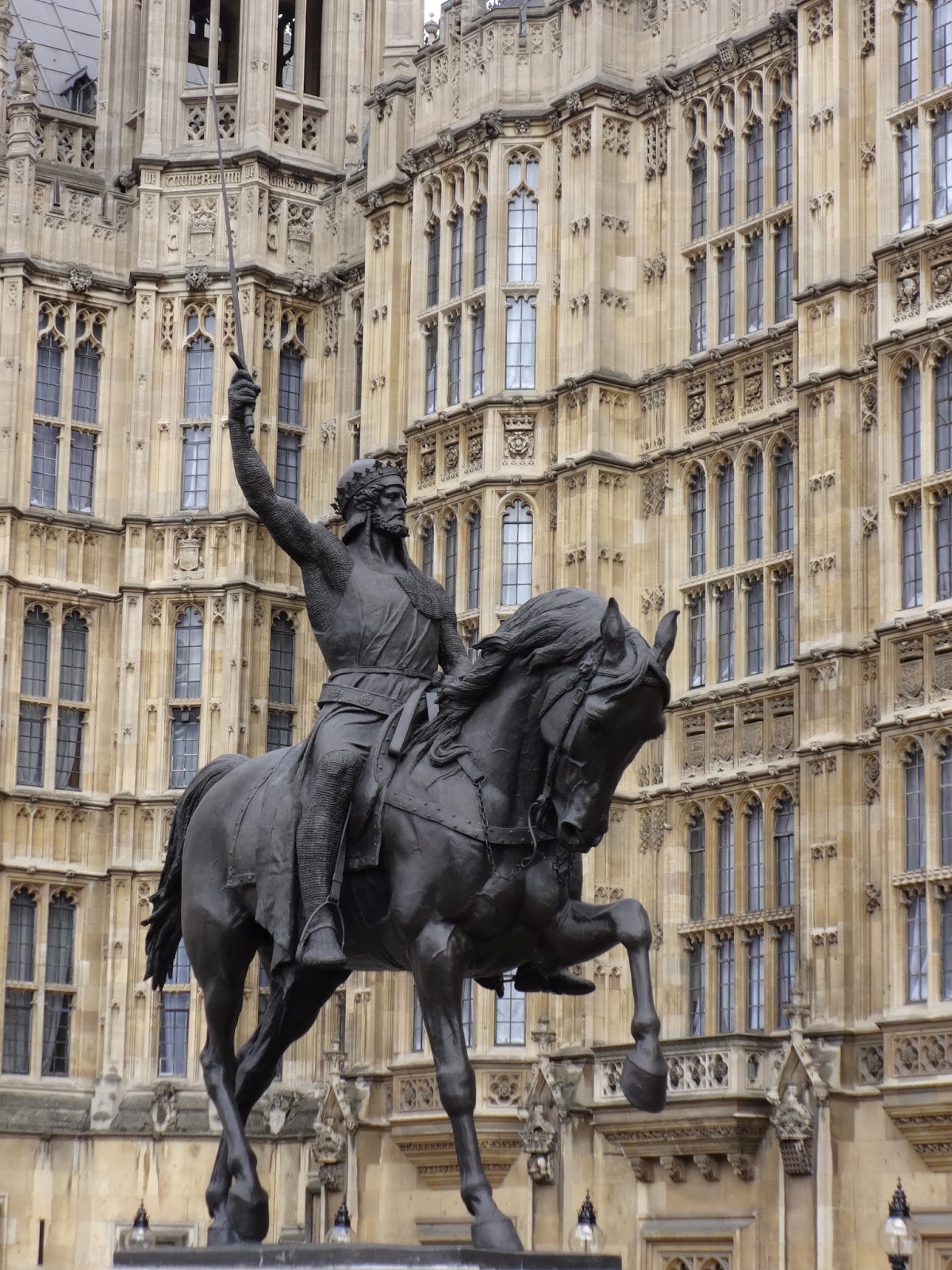 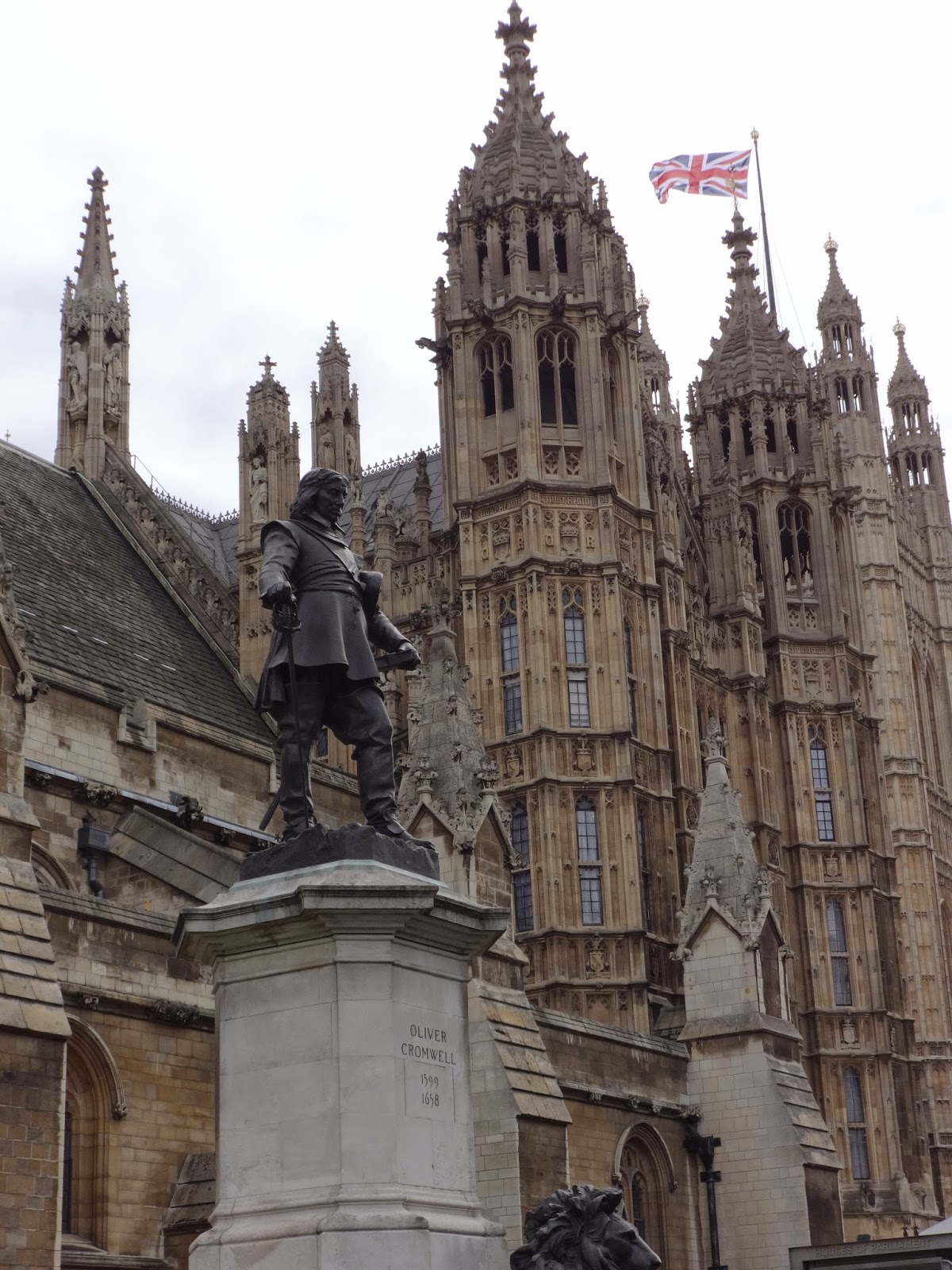 Our tour began and ended in the 916 year old Westminster Hall, which was designed to host state occasions and to be a place for feasts and entertainment.  Work on the hall began during the reign of William Rufus, son of William the Conqueror, who desired a space that would impress and overawe.  It is one of the largest undivided medieval spaces in existence today. 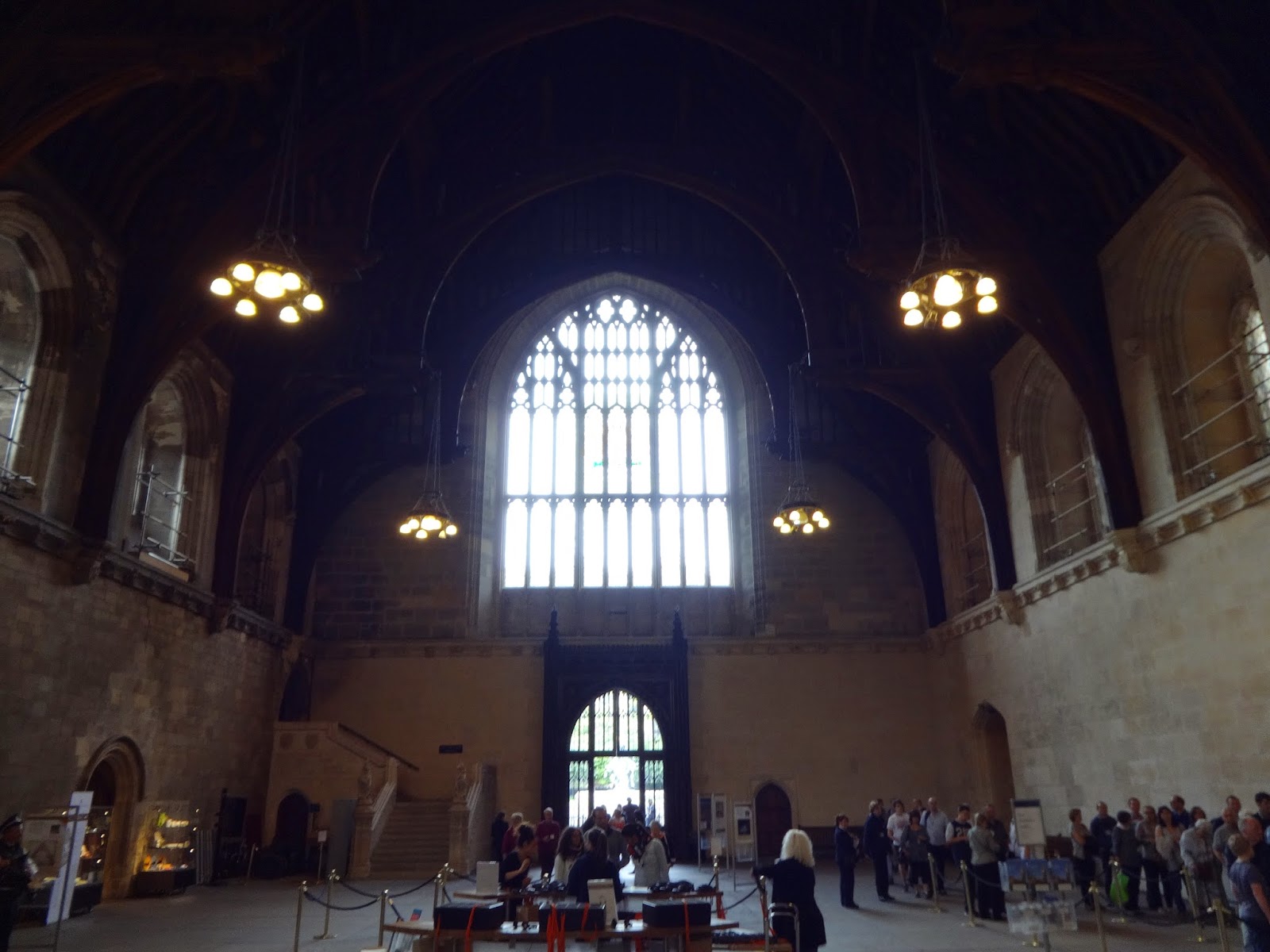 Westminster Hall is one of only two structures that survived the fire of 1834 intact; all else had to be rebuilt over a 20 year period.  The hall has been used for many events during its long history.  Coronation banquets were held here from 1189-1821.  The trials of King Charles I and Guy Fawkes took place within these walls.  Today, the hall is used for great ceremonial events; Queen Elizabeth II, Nelson Mandela, and Barack Obama are but examples of those that have addressed Parliament under this roof in recent years.  It is customary for monarchs to lie in state here after their deaths. 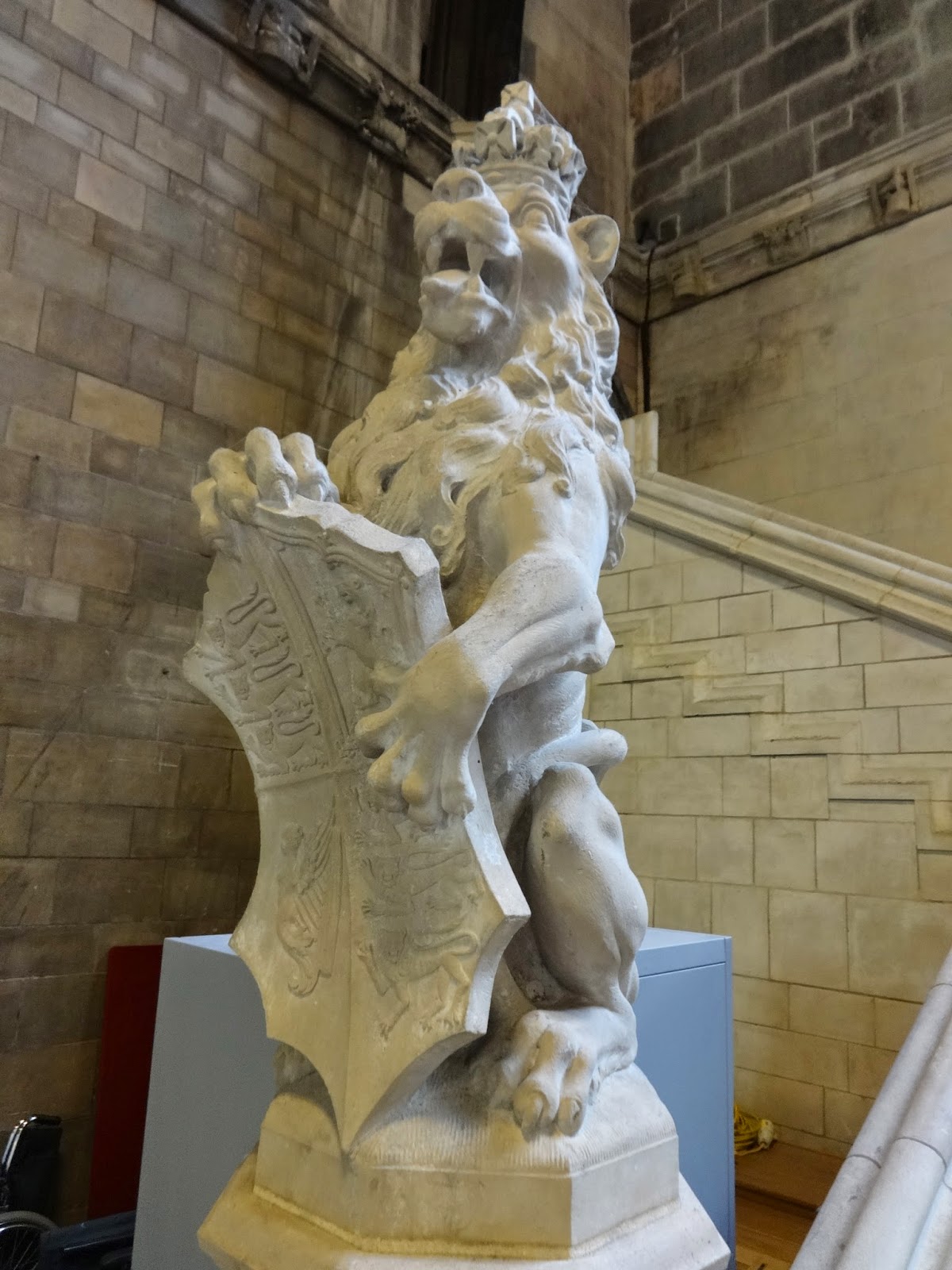 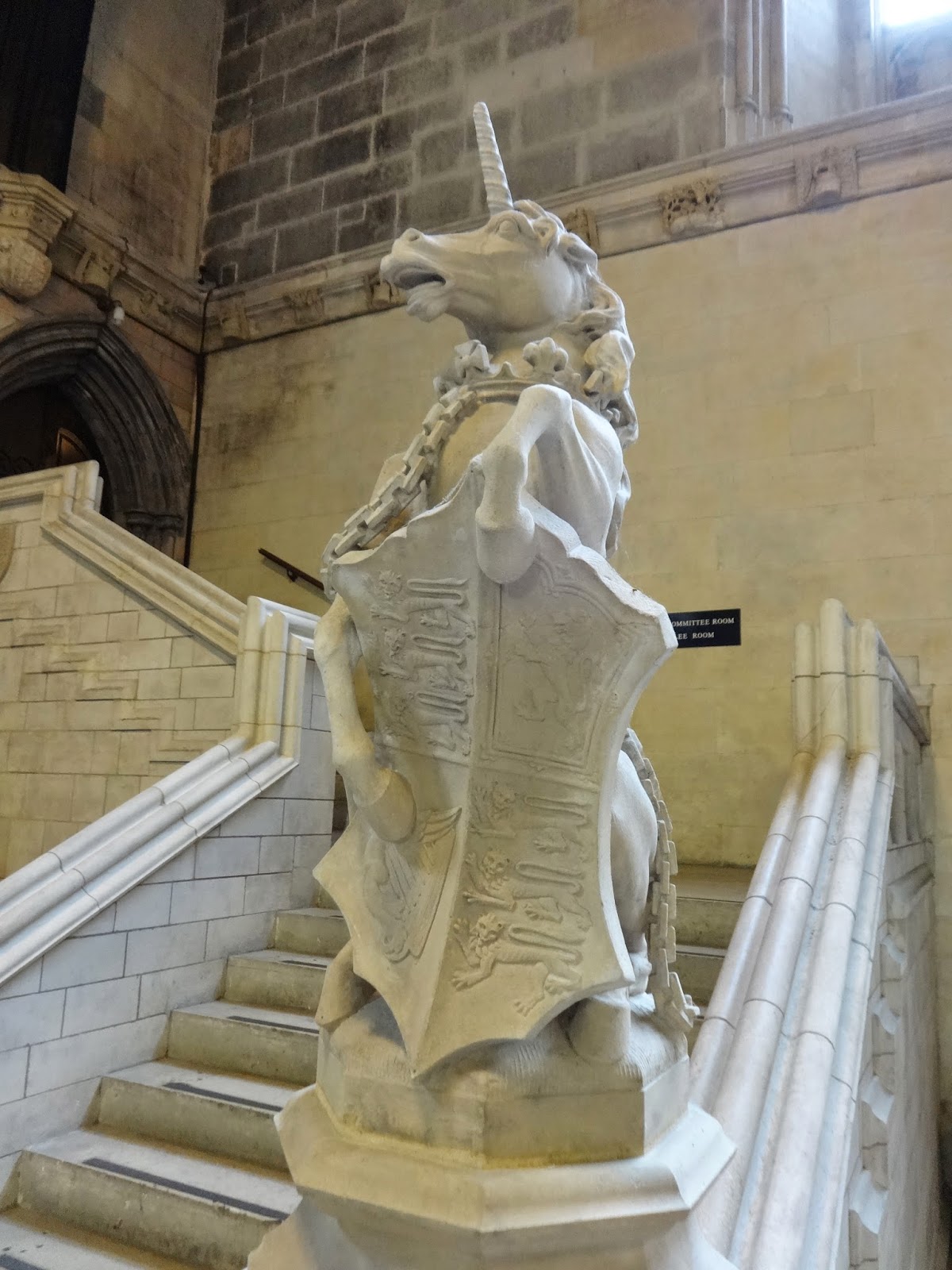 It's a shame they don't have an interesting mosaic tile pattern on the floor or a Chihuly chandelier, because that was the only room in which photographs were allowed.

Other highlights of the tour (with Internet-swiped photos) include: 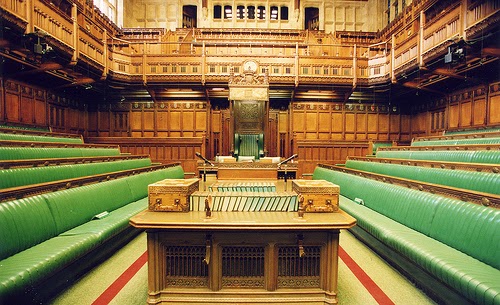 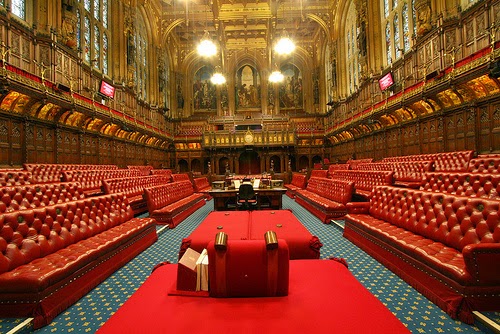 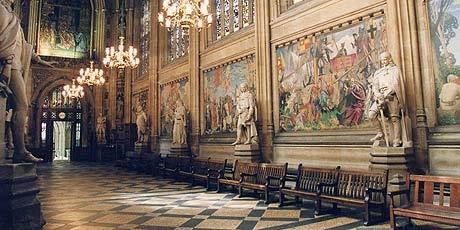 Leaving the Houses of Parliament, we walked along the North Bank of the River Thames, casually admiring the sights, architecture, and various monuments that we passed along the way.  Here, we see TJ and Anwarul posing with the London Eye, a giant Ferris wheel that sits on the river's South Bank.  Also known as the Millennium Wheel, it is Europe's tallest Ferris wheel. It opened to the public on March 9, 2000.  I remember to this day, and with great disappointment, how I missed my opportunity to ride this popular attraction during my study abroad trip.  My group arrived just as they were closing for the evening, and no amount of self-entitled tourist pleading was going to keep them open a second longer than necessary.  I'm a working stiff now, too, so I'm right there with you, Ferris wheel operators of the world.  It had been my utmost hope that I could finally fulfill my 13-year wish on this trip...but alas it was not meant to be.  The timing just never worked out.  I have yet to lose the faith though; we are already discussing a Christmas trip to London sometime in the future.  As long as the line for this thing was, I'm sure it'll still be around. 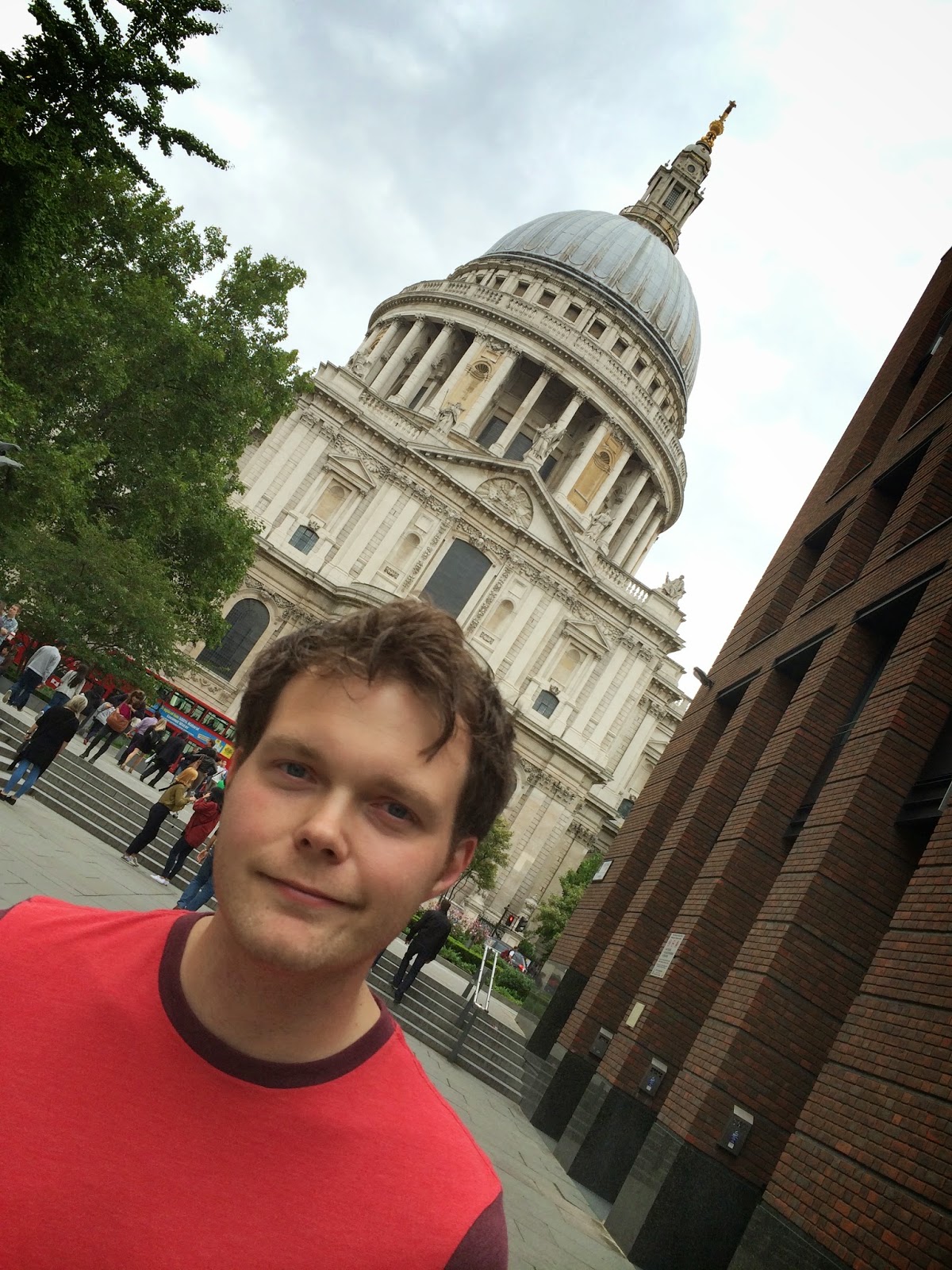 St. Paul's Cathedral is an Anglican cathedral that sits atop Ludgate Hill, the highest point in the city of London.  Dedicated to the Apostle Paul, the cathedral is the seat of the Bishop of London and the mother church of the Diocese of London.  It is the second largest church building in the United Kingdom and was designed by Sir Christopher Wren in the 17th century, following the Great Fire of London in 1666.

Important services held at St. Pauls have included the funerals of Lord Nelson, the Duke of Wellington, Sir Winston Churchill, and Margaret Thathcher, the wedding of Prince Charles and Lady Diana and the Diamond Jubilee of Queen Elizabeth II.  Photography was not permitted inside (because why should beauty be shared?), so here is another Internet-swiped image. 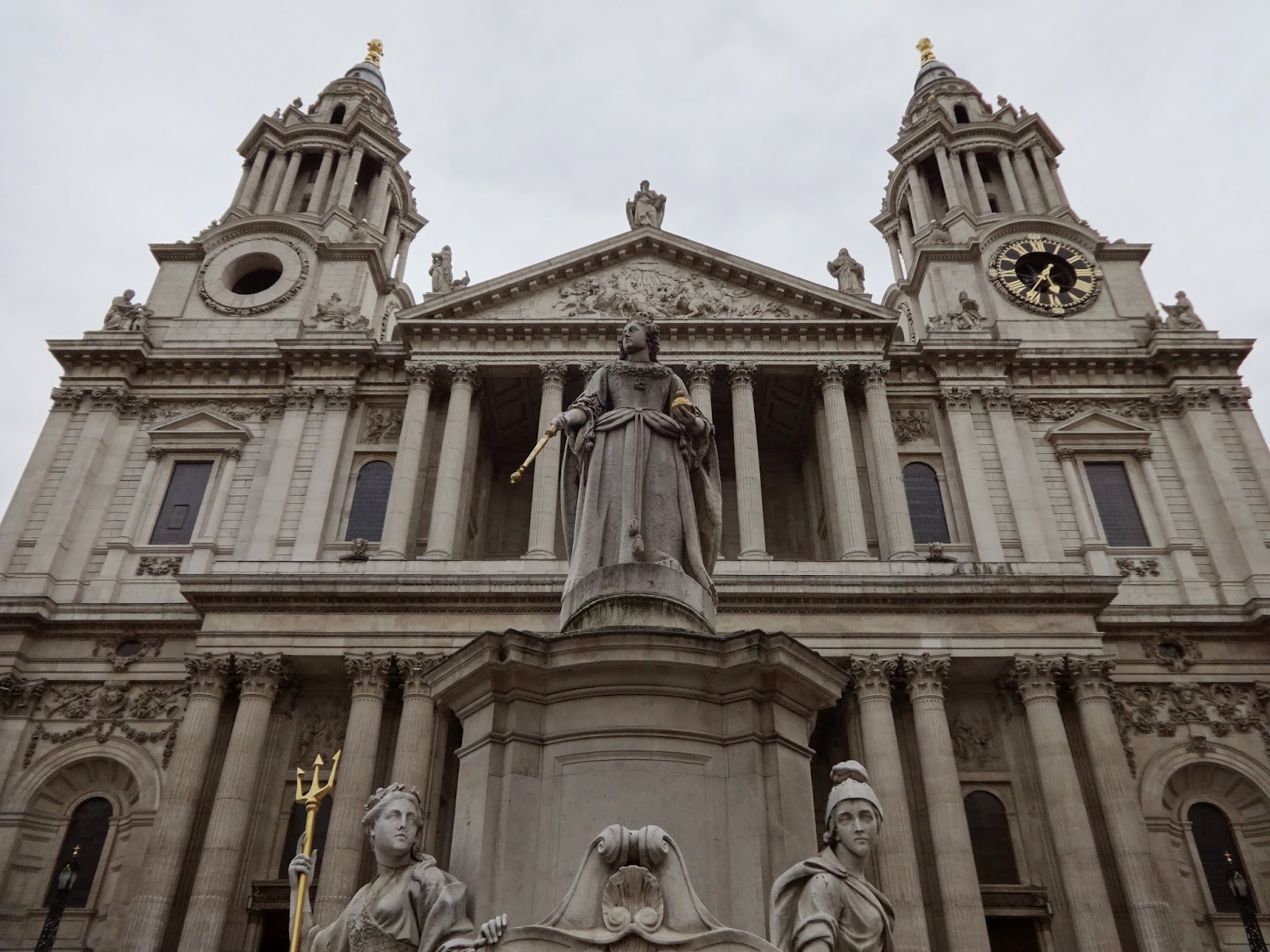 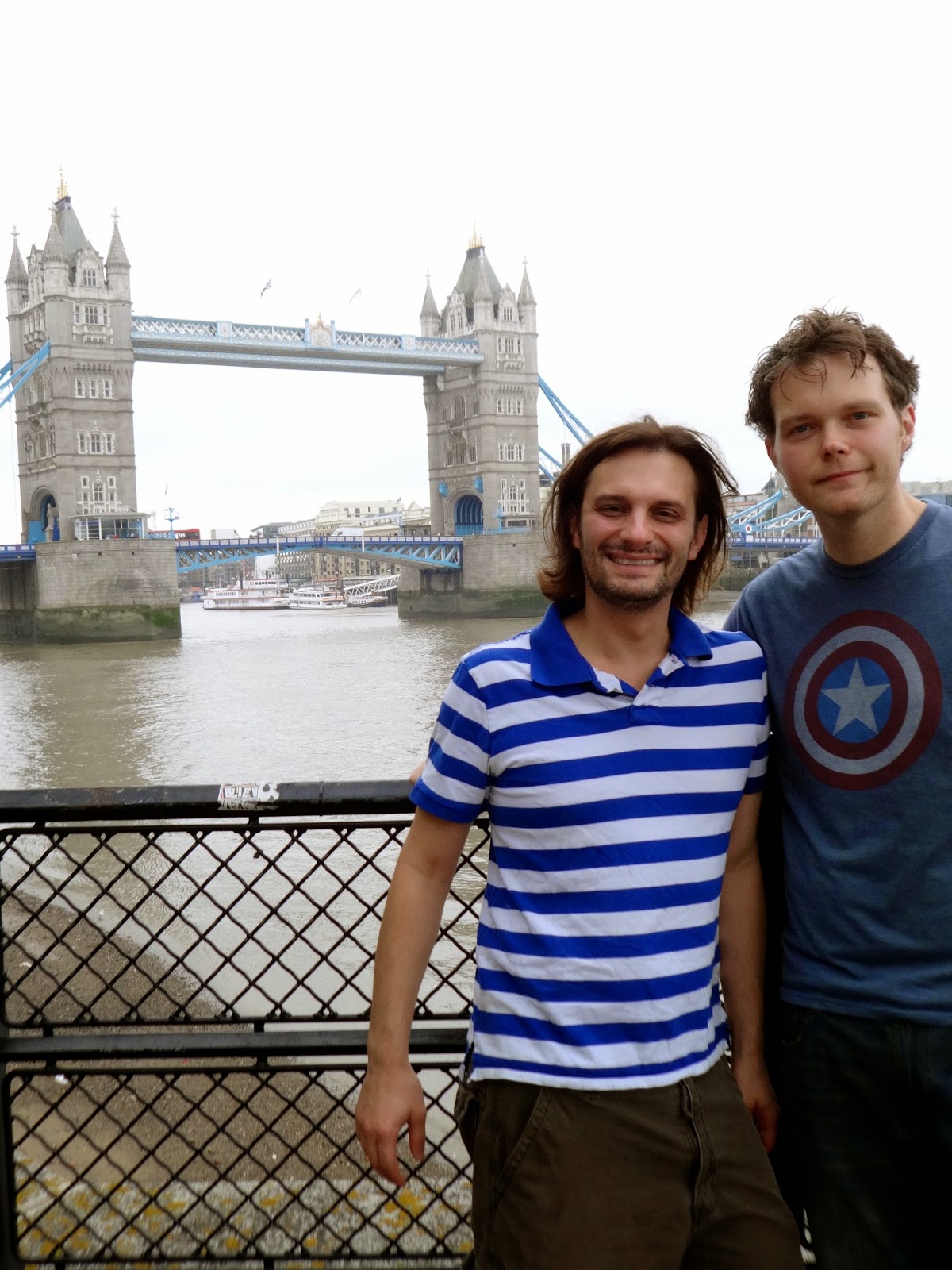 Tower Bridge was built over 120 years ago to ease road traffic while maintaining river access to the busy Pool of London docks.  Built with giant moveable roadways that lift up for passing ships, it is to this day considered an engineering marvel and is arguably one of the most instantly recognizable structures in the entire world.

The attraction consists of a small museum, called the Tower Bridge Exhibition, that tells the history of the bridge and how/why it came into existence.  Visitors are able to visit the Victorian Engine Rooms, which house the steam engines that once powered the bridge lifts.

I've got to say, the bridge itself is gorgeous, but the fun stops there.  The exhibits aren't particularly fascinating.  I was expecting more artifacts, but the majority of the exhibit takes the form of print media and timelines of events, not all of which pertain to the bridge itself but rather greater London.  Your time is better served just stopping for a photo and moving on with your day. 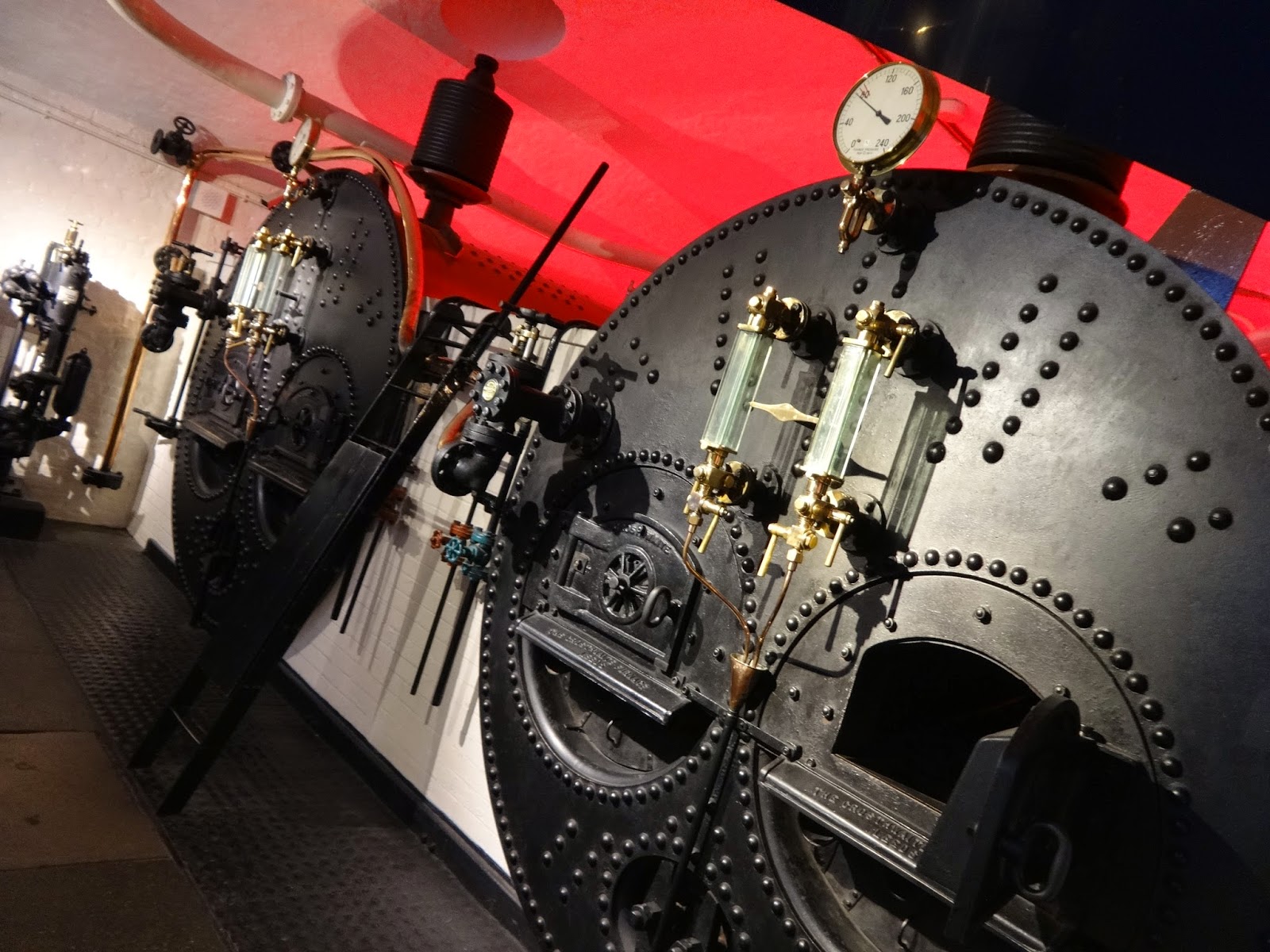 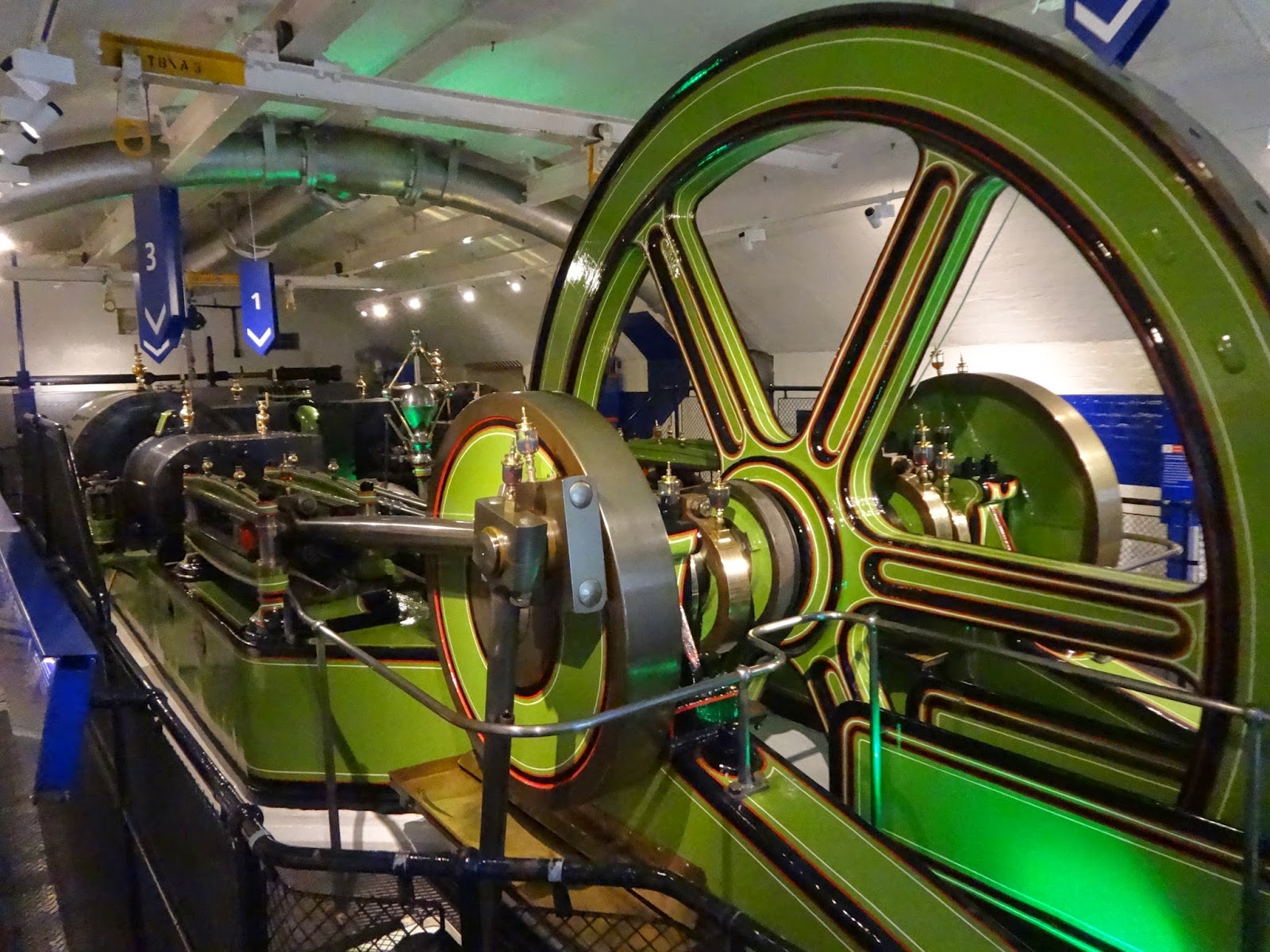 The Tower of London, offically named Her Majesty's Royal Palace and Fortress, is a historic castle located on the North bank of the River Thames.  It was founded towards the end of 1066 as part of the Norman Conquest of England.  A grand palace, it served as a royal residence in its earlier history. 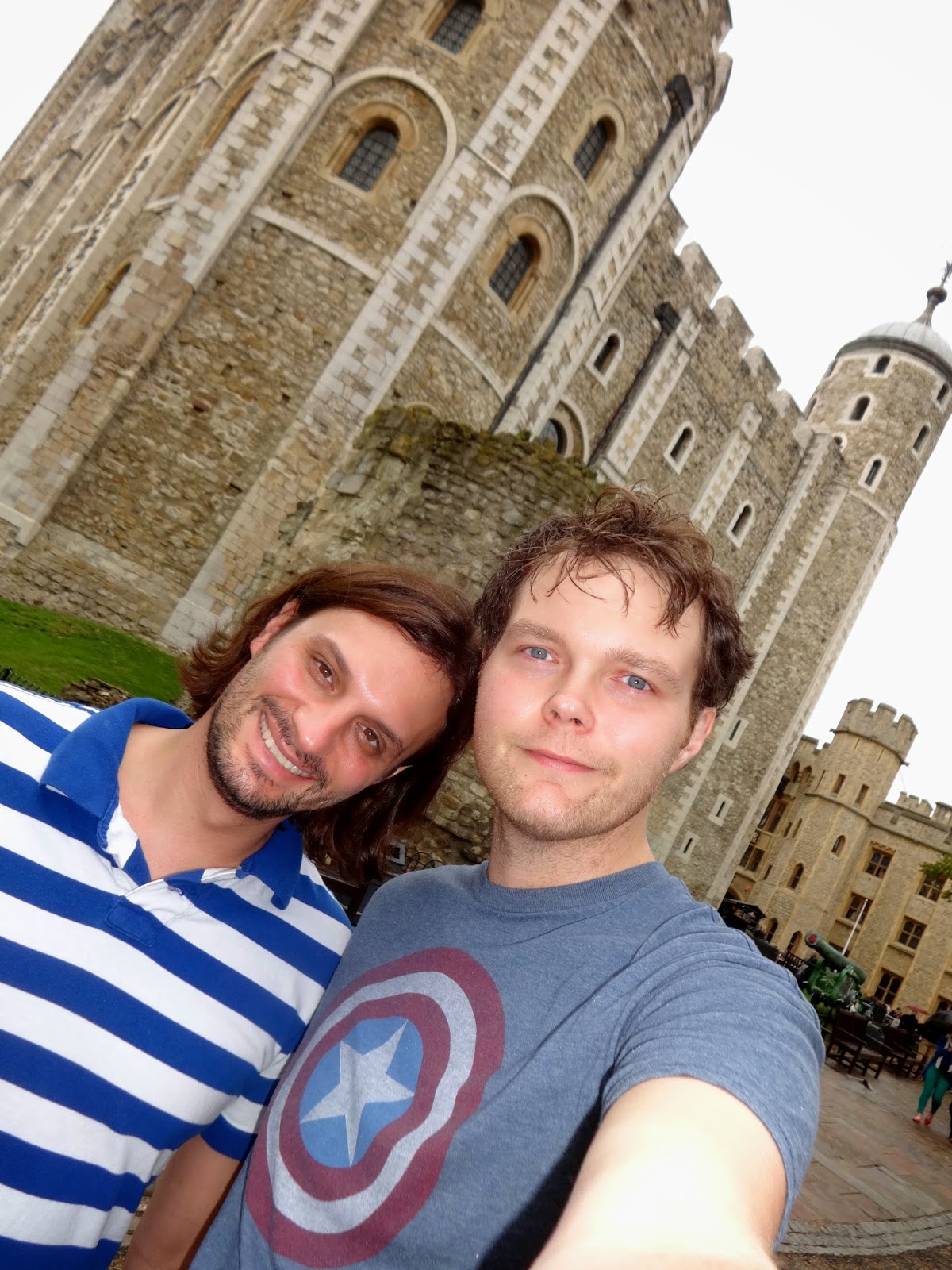 The White Tower, which gives the castle its name, was built by William the Conqueror in 1078, and was resented by the citizenry as a symbol of oppression inflicted upon London by the ruing elite.

The castle was used as a prison from 1100 to 1952 though, despite its enduring reputation as a place of torture and death, only seven people were executed there before the World Wars. Despite this, there was a charming exhibition featuring various torture devices on display.

The Tower is an expansive complex featuring several buildings set within two concentric rings of defensive walls and a moat.  It was inscribed onto the list of Unesco World Heritage Sites in 1988. 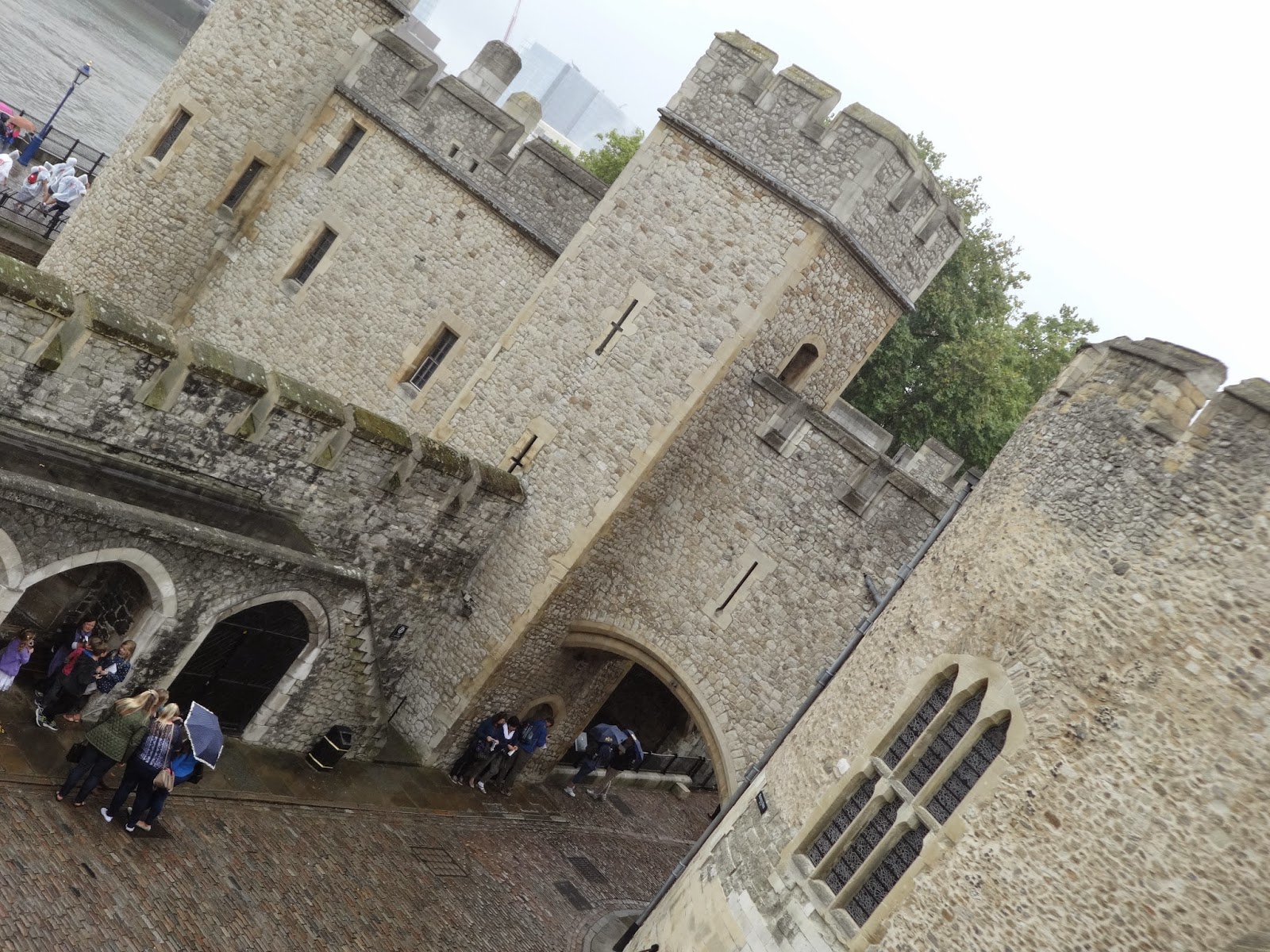 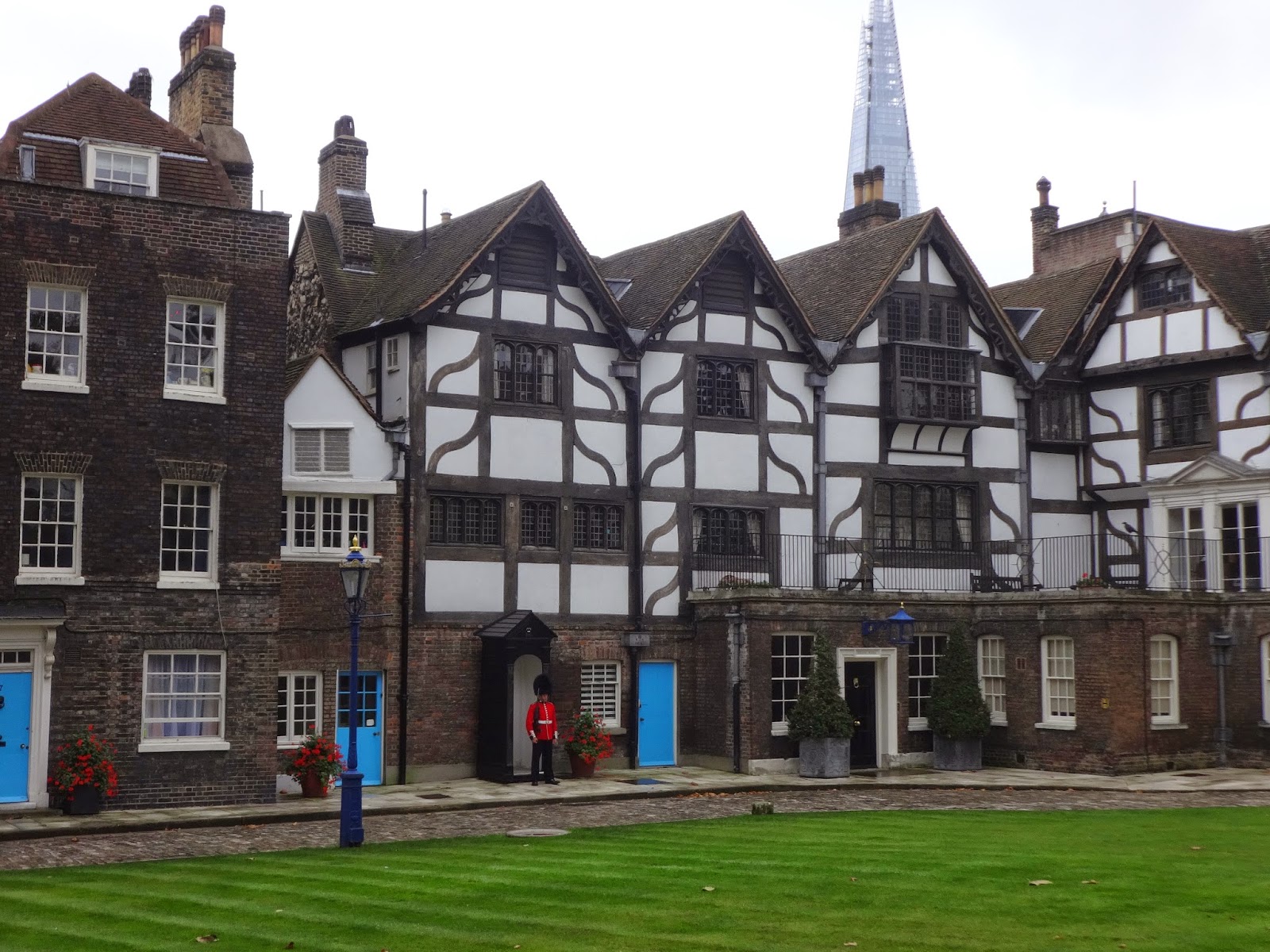 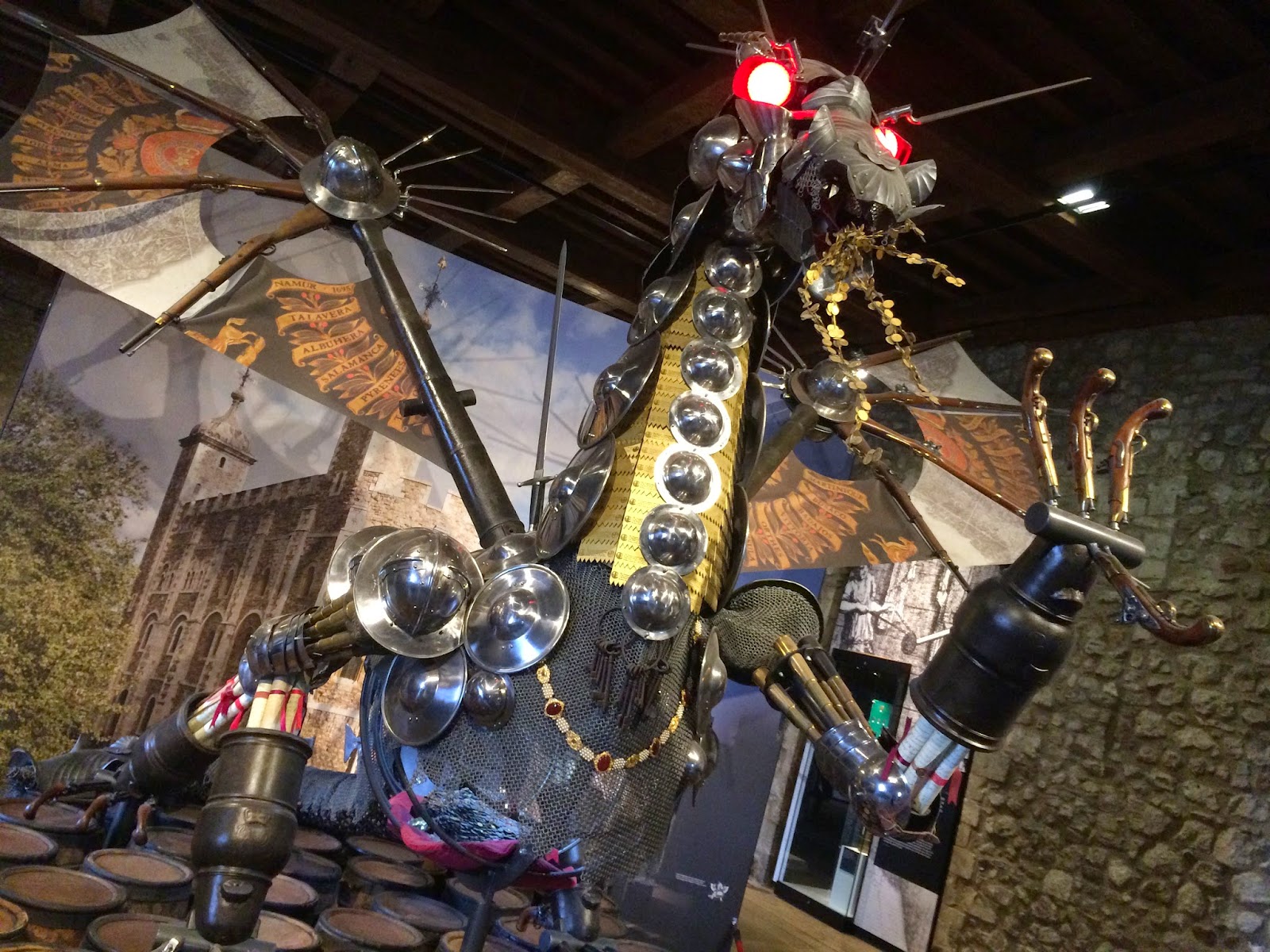 The Tower has served as an armory, a treasury, a menagerie, the home of the Royal Mint, a public records office, and the home of the Crown Jewels of the United Kingdom.  The jewels are on display in a vault, which you are able to visit but of course not photograph.  This time, I feel the policy makes sense; why give photographic tools to thieves-in-planning?  Though with a dragon this awesome guarding the place, I'm sure they have nothing to worry about.  This ferocious fella was part of a museum exhibit featuring various suits of armor through the ages.  One would then suppose that dragons did exist, and they had incredible fashion sense.

My favorite thing about the Tower was actually a temporary art exhibit located outside of the complex, in the moat.  Blood Swept Lands and Seas of Red was an evolving art installation that sought to fill the moat with 888,246 hand-made ceramic poppies.  Each one represents a British military death during the First World War, which began in 1914.  The last poppy was scheduled to be planted on November 11, 2014, commemorating the war's end on the same day in 1918.  Guests were invited to purchase one of the poppies for £25, with 10% of the price, plus all net proceeds, going to one of six military service charities. 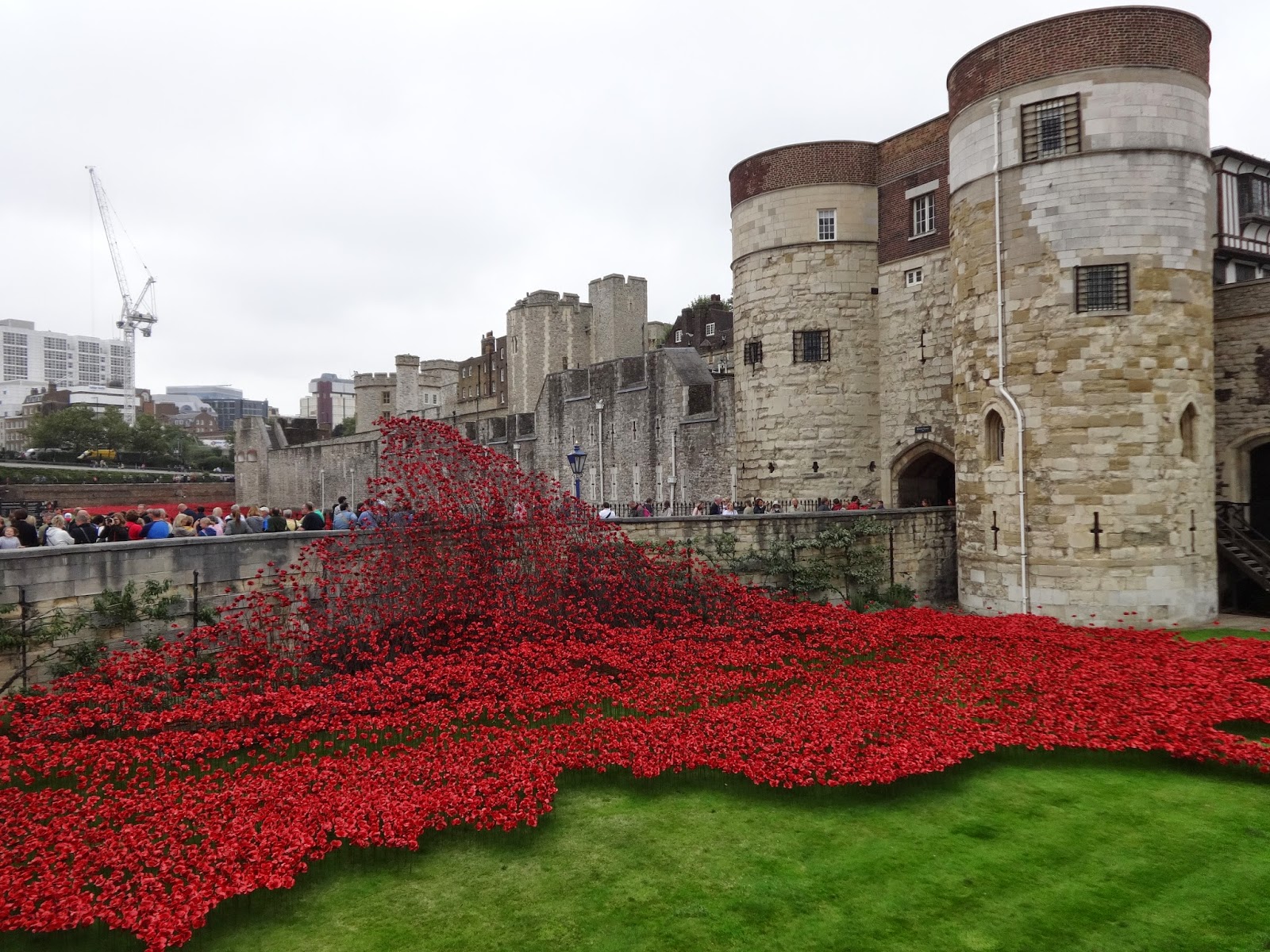 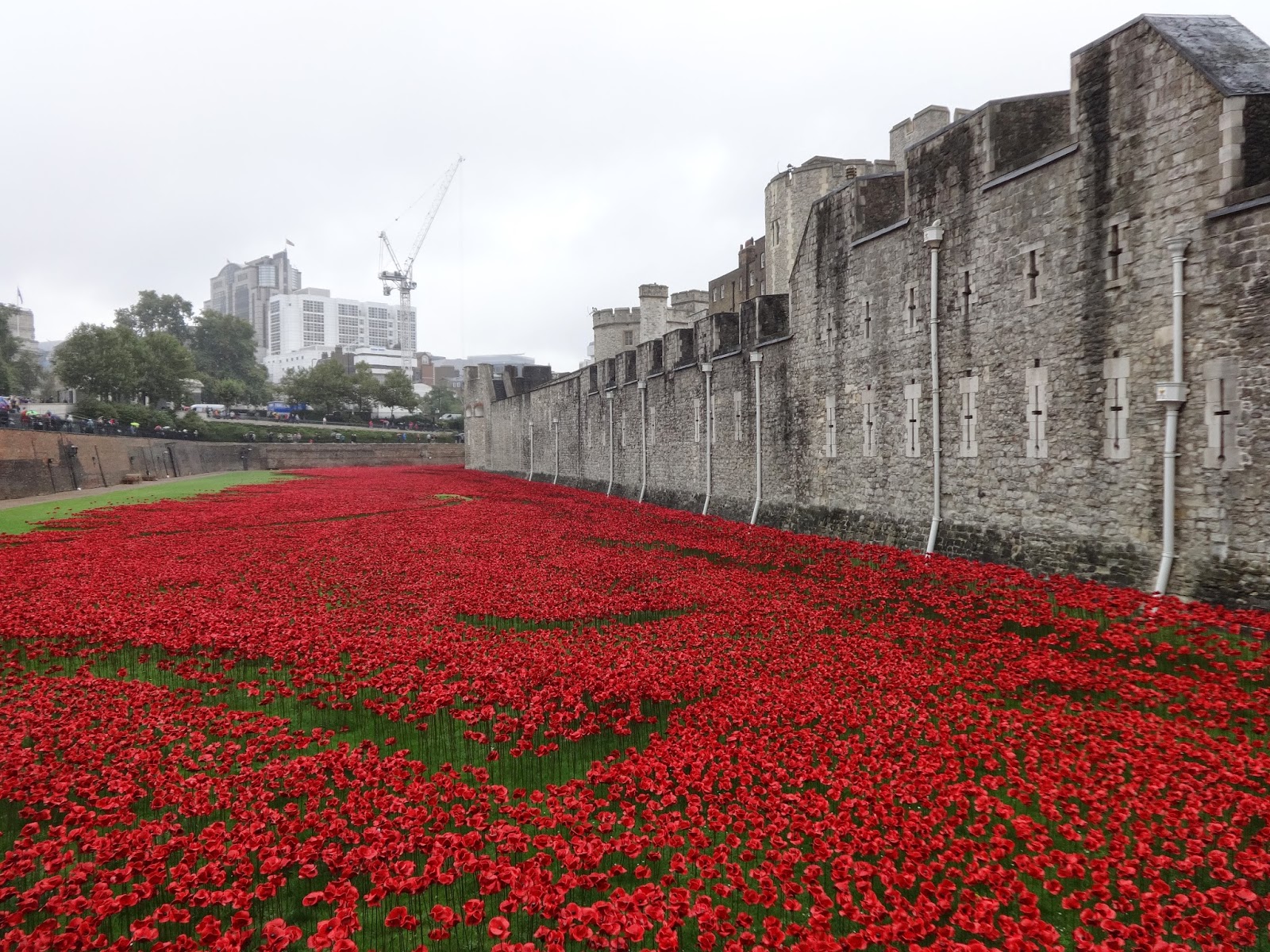 The exhibit has sense been dismantled, and poppies are on their way to their new homes.  I'm sad to say that we didn't take advantage of the opportunity, and I am now perusing eBay.

Join me next time as I recount our final London exploits and prepare to take our tale into other corners of the kingdom.
Posted by Aaron at 10:10 AM