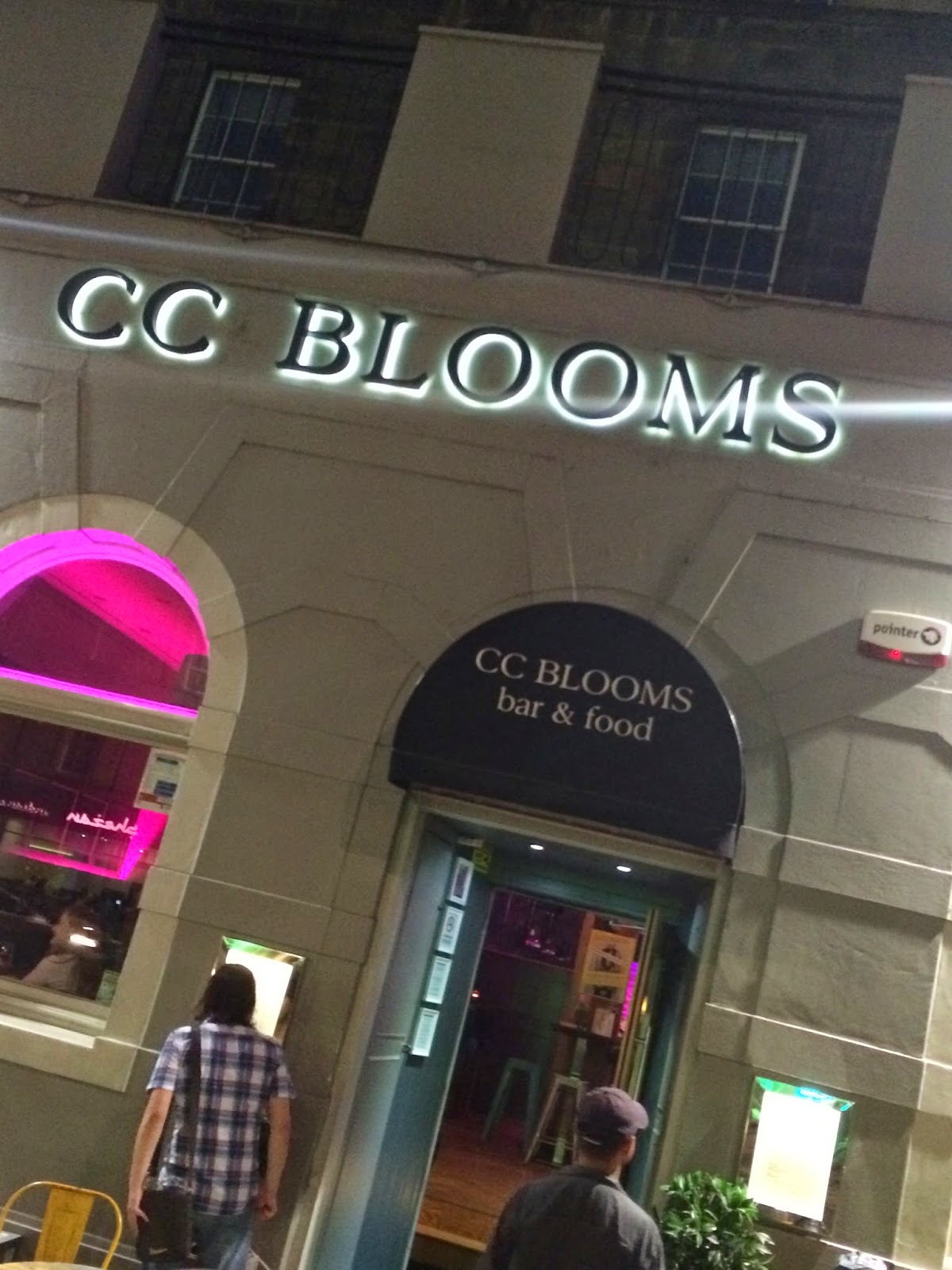 Following our pitstop in Manchester, we left England entirely and headed for Scotland.  Our first stop was Edinburgh, and we arrived just in time to start thinking about nighttime activities.  From what we could gather, Edinburgh doesn't have a terribly active LGBT nightlife, but we were elated by the opportunity to have snacks and drinks at none other than CC Blooms.

American comedian, actor, and LGBT advocate Margaret Cho once used this establishment as the basis for one of her better jokes:

"There's a bar in Edinburgh called CC Blooms.  CC Bloom is the name of the character that Bette Middler played in Beaches.  That is the gayest thing I have ever heard in my entire life.  That place should just be called F--- Me in the A--...Bar & Grill."

Oh, Margaret.  Thank you so much for the joke that led us here.  The snacks were tasty.  The booze was on point.  The music and lighting made us dance.  We had only two evenings in Edinburgh and we spent a good chunk of both of them here.

Unfortunately, two evenings also meant that we only had one full day.  Had to make it count.

St. Giles Cathedral is the historic City Church of Edinburgh.  It is the Mother Church of Presbyterianism and contains the Chapel of the Order of the Thistle (Scotland's company of knights headed by the Queen). 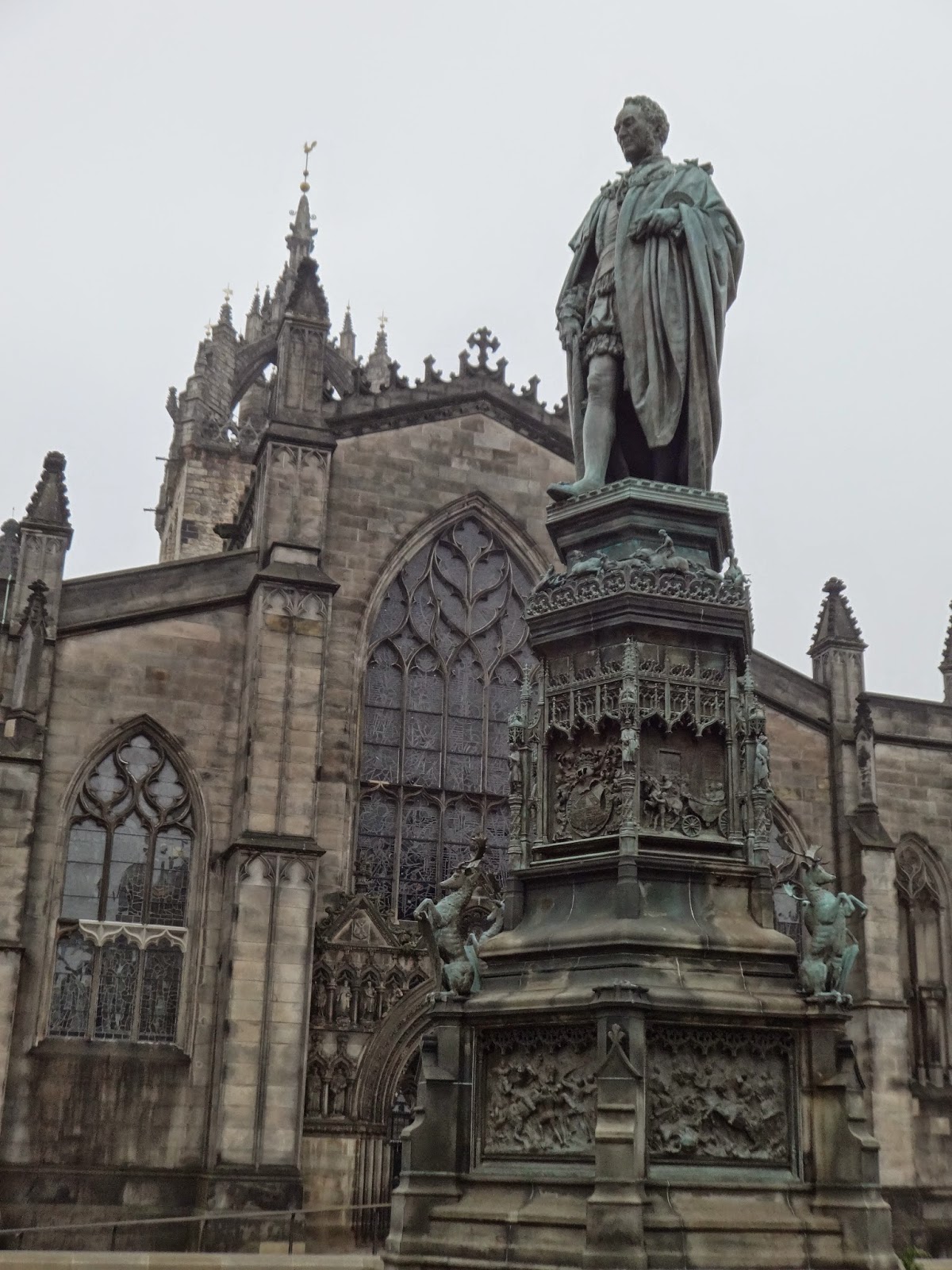 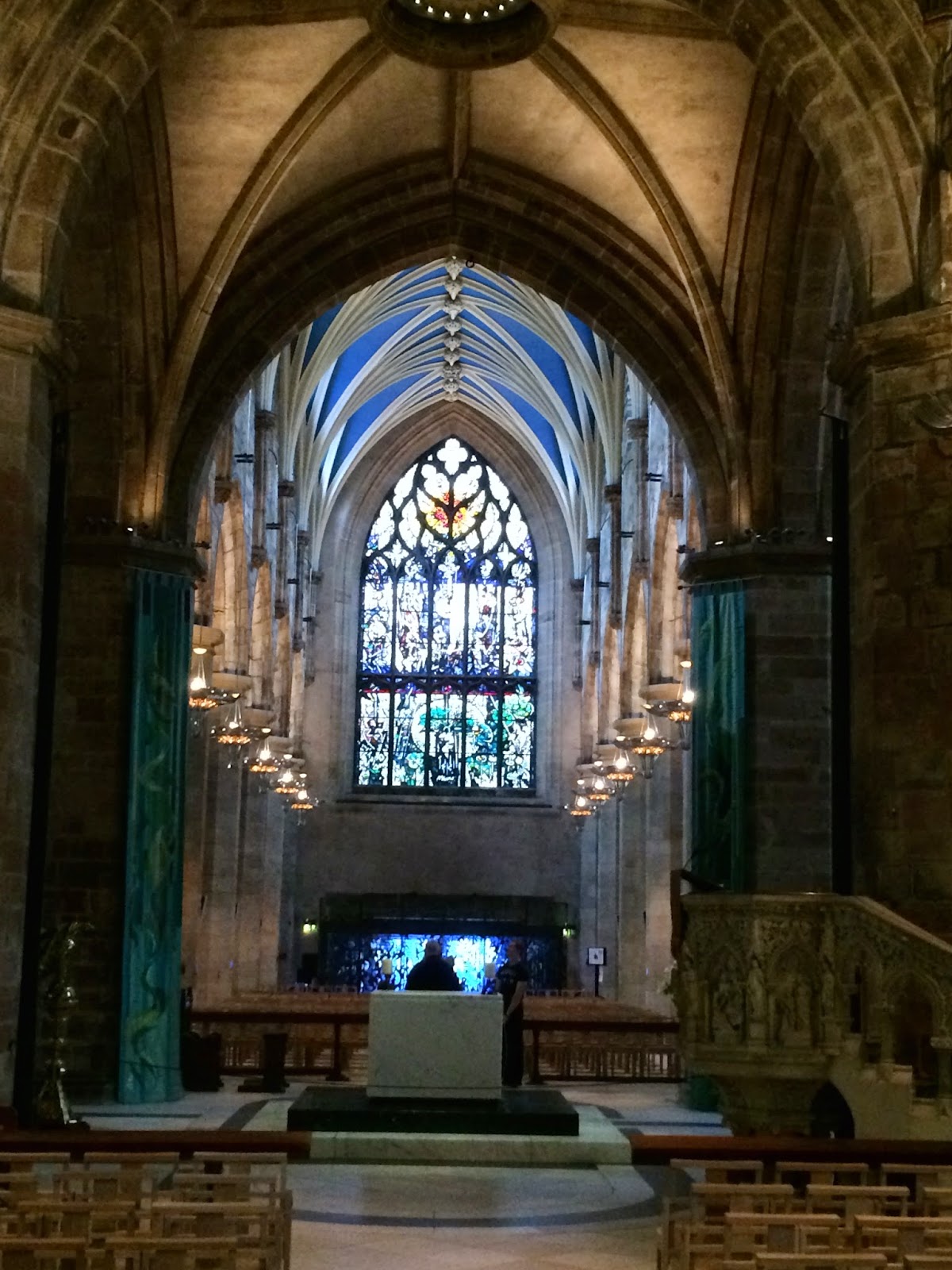 Edinburgh Castle has dominated the city's skyline from its position on the Castle Rock for over 3,000 years.

In ancient times it was known as Din Eidyn, 'the stronghold of Eidyn.'  Then, around 638 AD, the Angles invaded.  Ever since it has been known by its English name - Edinburgh. 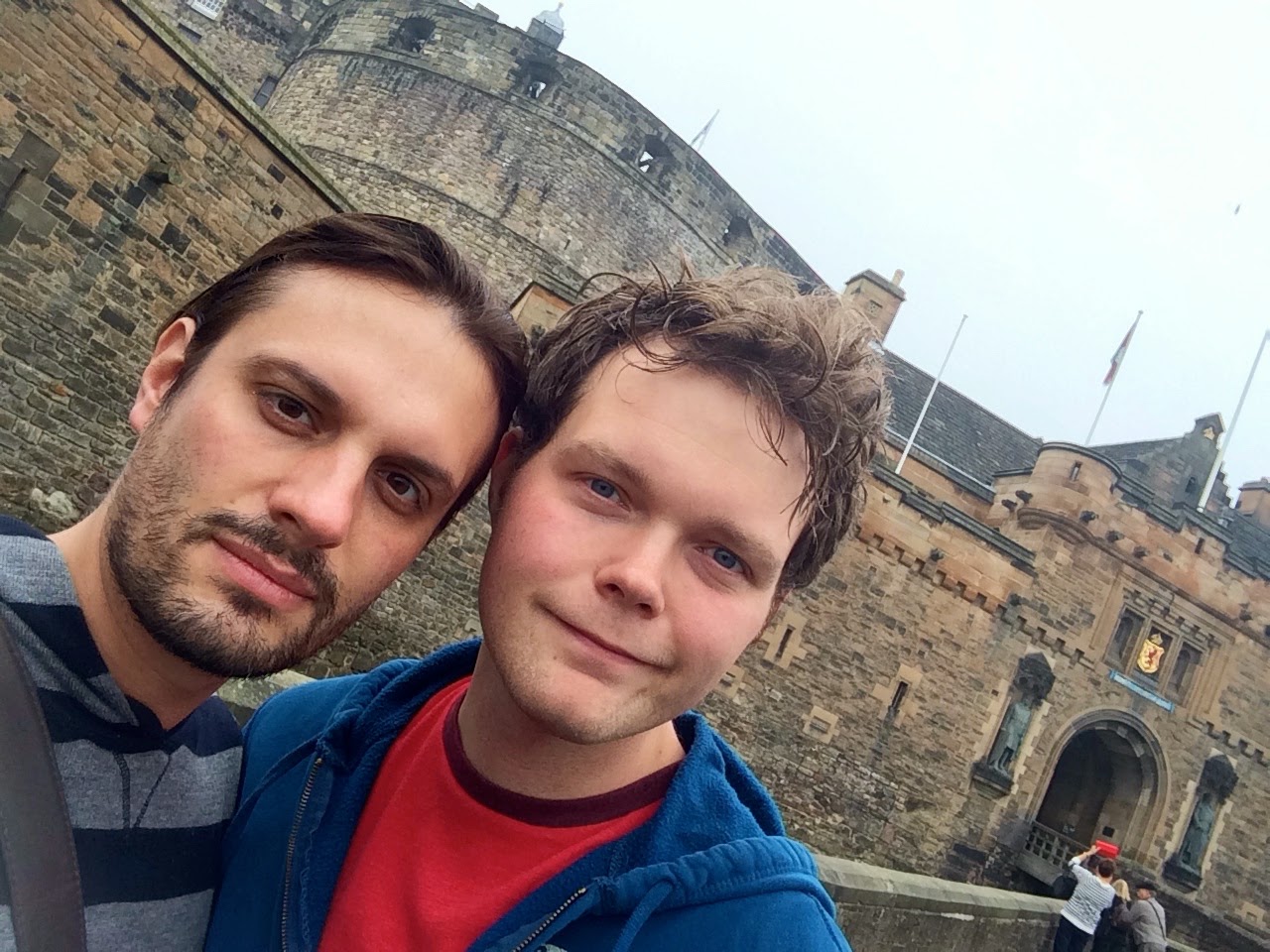 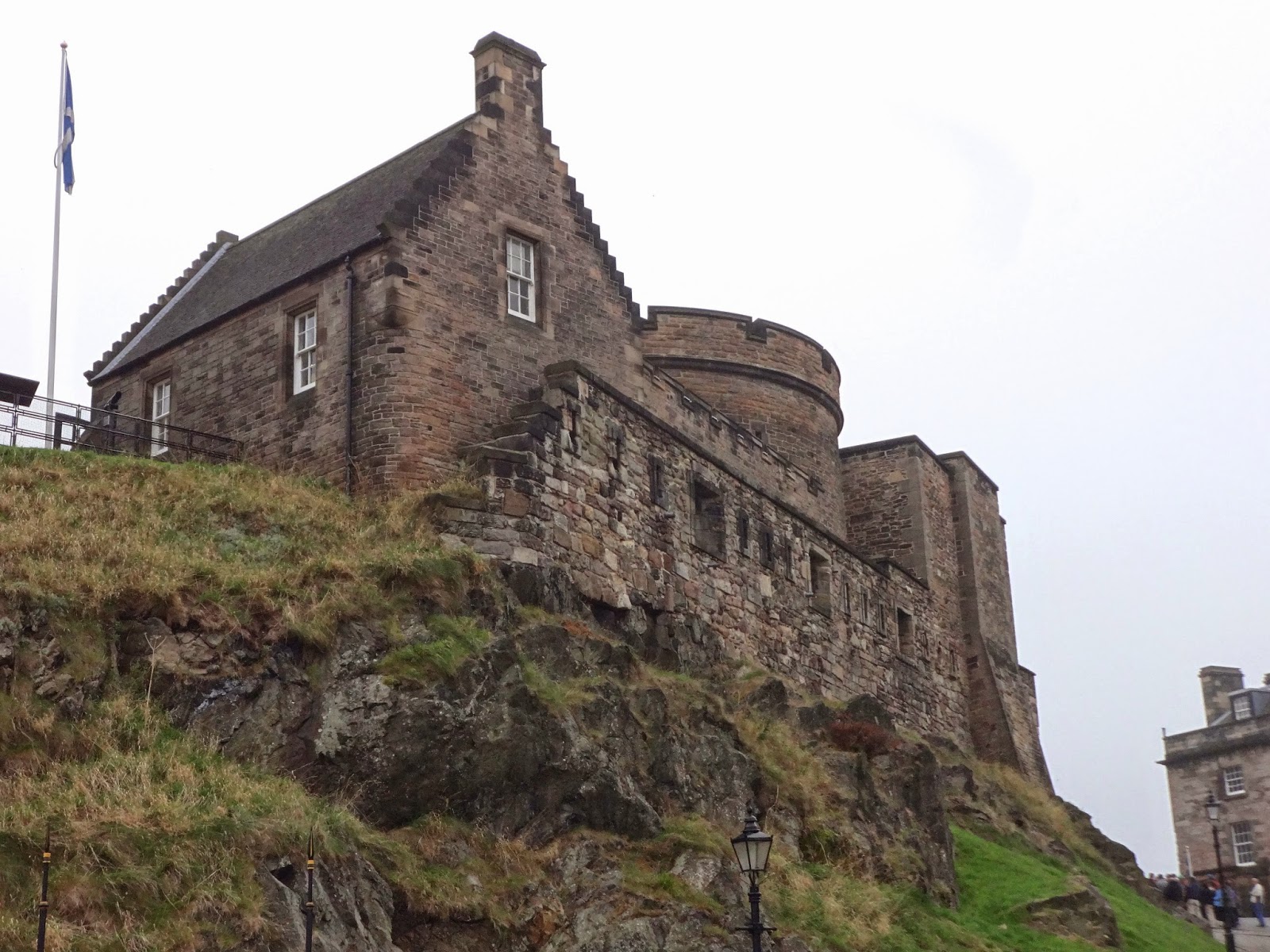 It became Edinburgh's primary royal castle in the Middle Ages, enduring siege after siege during the long wars with England.  By the time of King James VI's birth here in 1566, the castle was little more than a garrison fortress.  The castle, now a UNESCO World Heritage Site, has since found new life as a museum and national icon, as well as home to the Honours of Scotland (aka Crown Jewels).

Our next stop had everyone buzzing...literally.  The Scotch Whisky Experience provides guests with a journey through a replica distillery that is very much trying to be a ride at Walt Disney World.  You sit in a faux whisky barrel as it glides gently along an Omnimover-style track as animatronics and light projections tell you how whisky is made.  You are then invited to enjoy a whisky tasting and a peek into The World's Largest Whisky Collection, which houses almost 2500 individual bottles. 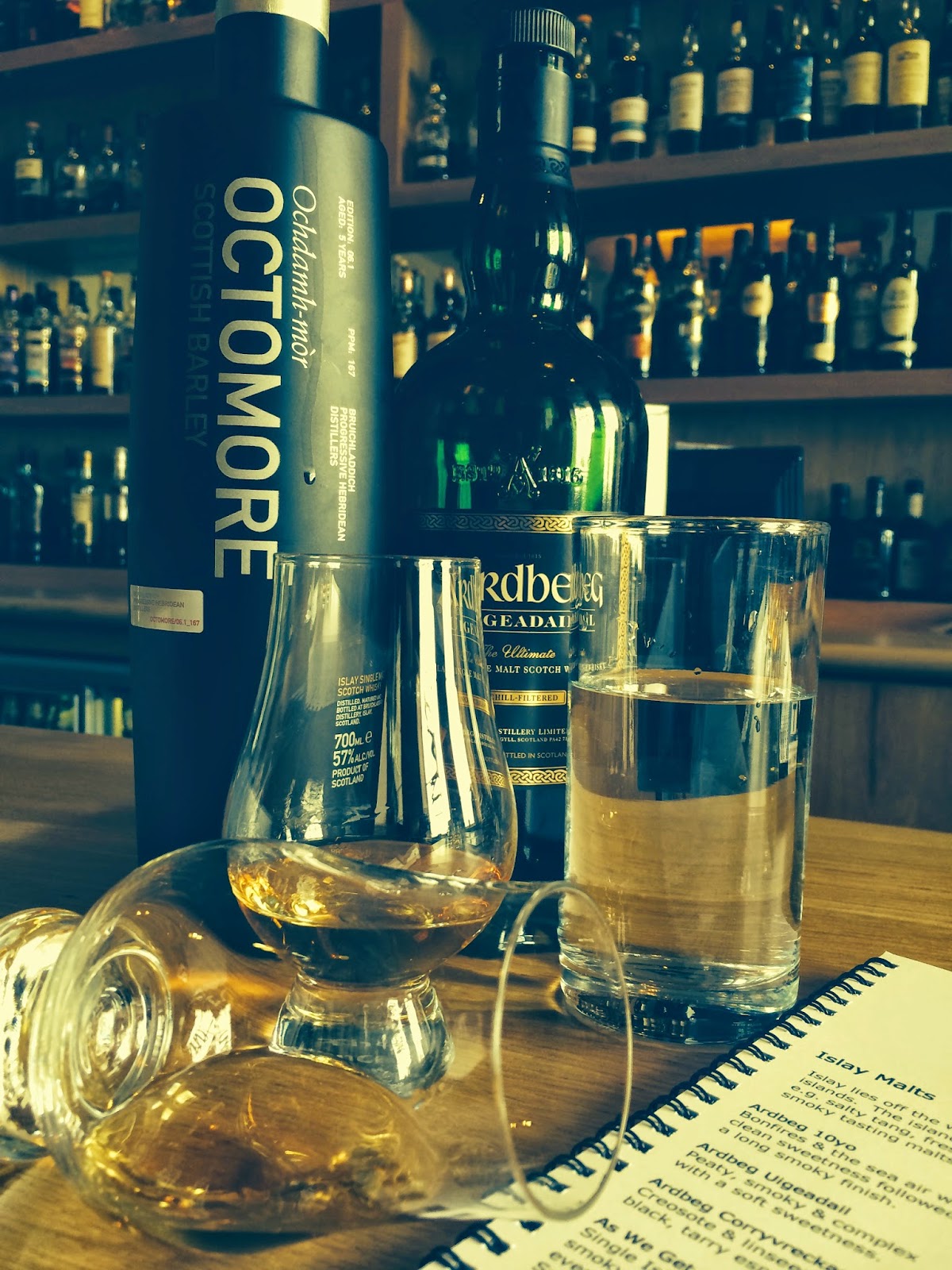 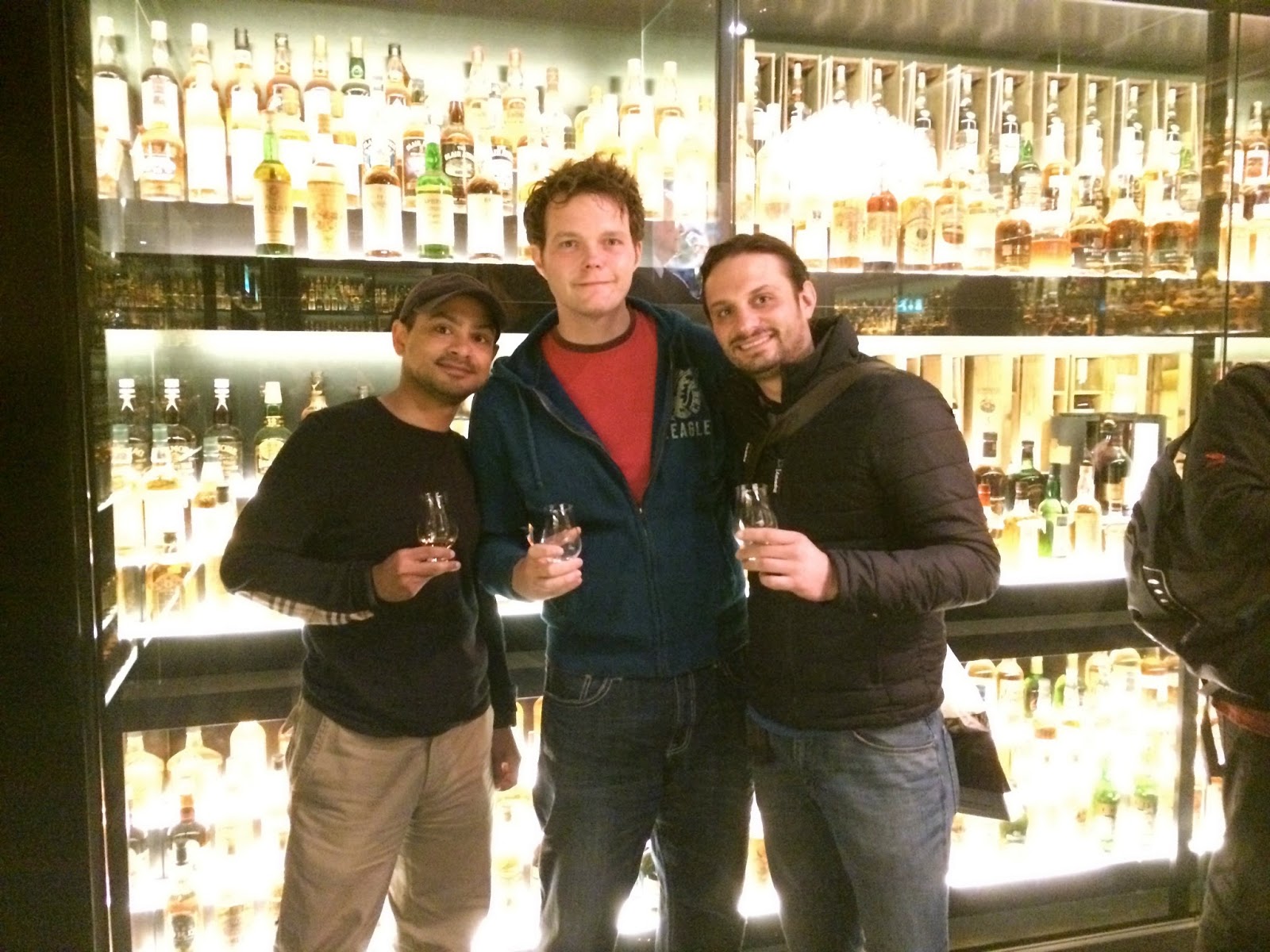 The tour concludes at a bar, where you are of course invited to purchase all sorts of whisky.  There were simply too many to choose from.  So we did a flight.  Whee!  And, I gotta say, the Duty Free employees LOVED us on the way home.

Calton Hill is just one of those things that you...notice...as you walk around Edinburgh.  It's huge.  So, it's only natural that we made our way up that particular hill. 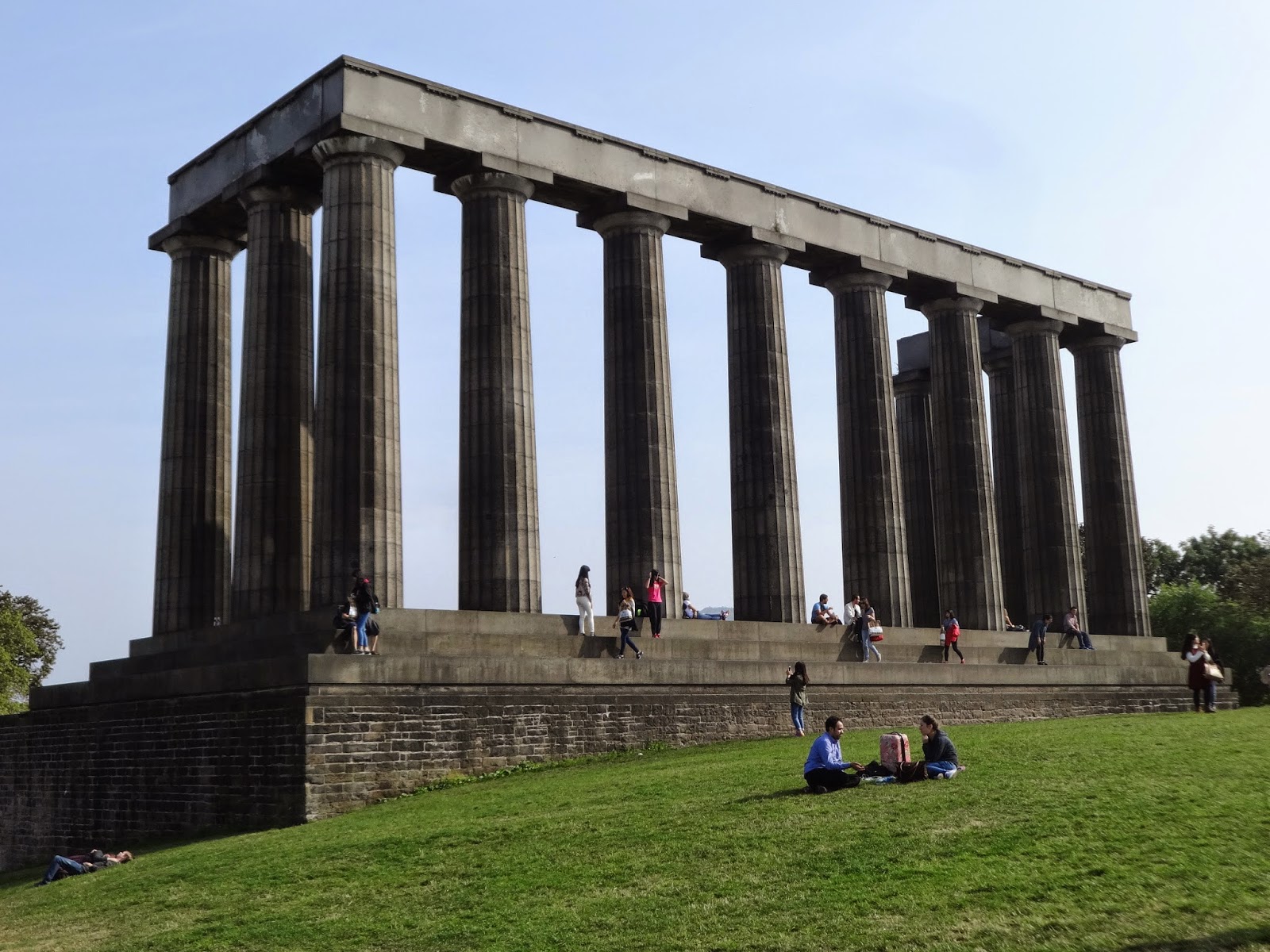 Calton Hill, along with Castle Rock, was formed by volcanic activity some 340 million years ago.  Over time, numerous Ice Ages carved and gouged the many hills we see today.  Calton Hill is an important part of the city's World Heritage Site and offers some of the best views of the city.  It is home to several iconic monuments and buildings, such as the National Monument.

Intended to be "A Memorial of the Past and Incentive to the Future Heroism of the Men of Scotland, it was left unfinished in 1829 due to a lack of funds.  Whomp Whomp.

Several other monuments decorate the hill.  Among them are the Nelson Monument (left) and the Dugald Stewart Monument (right).  The former commemorates Vice Admiral Horatio Nelson's victory over the French and Spanish fleets at the Battle of Trafalgarin in 1805.  The Dugald Stewart Monument is a memorial to the Scottish philosopher, who was a professor at the University of Edinburgh and held the chair of moral philosophy from 1786 until his death in 1828. 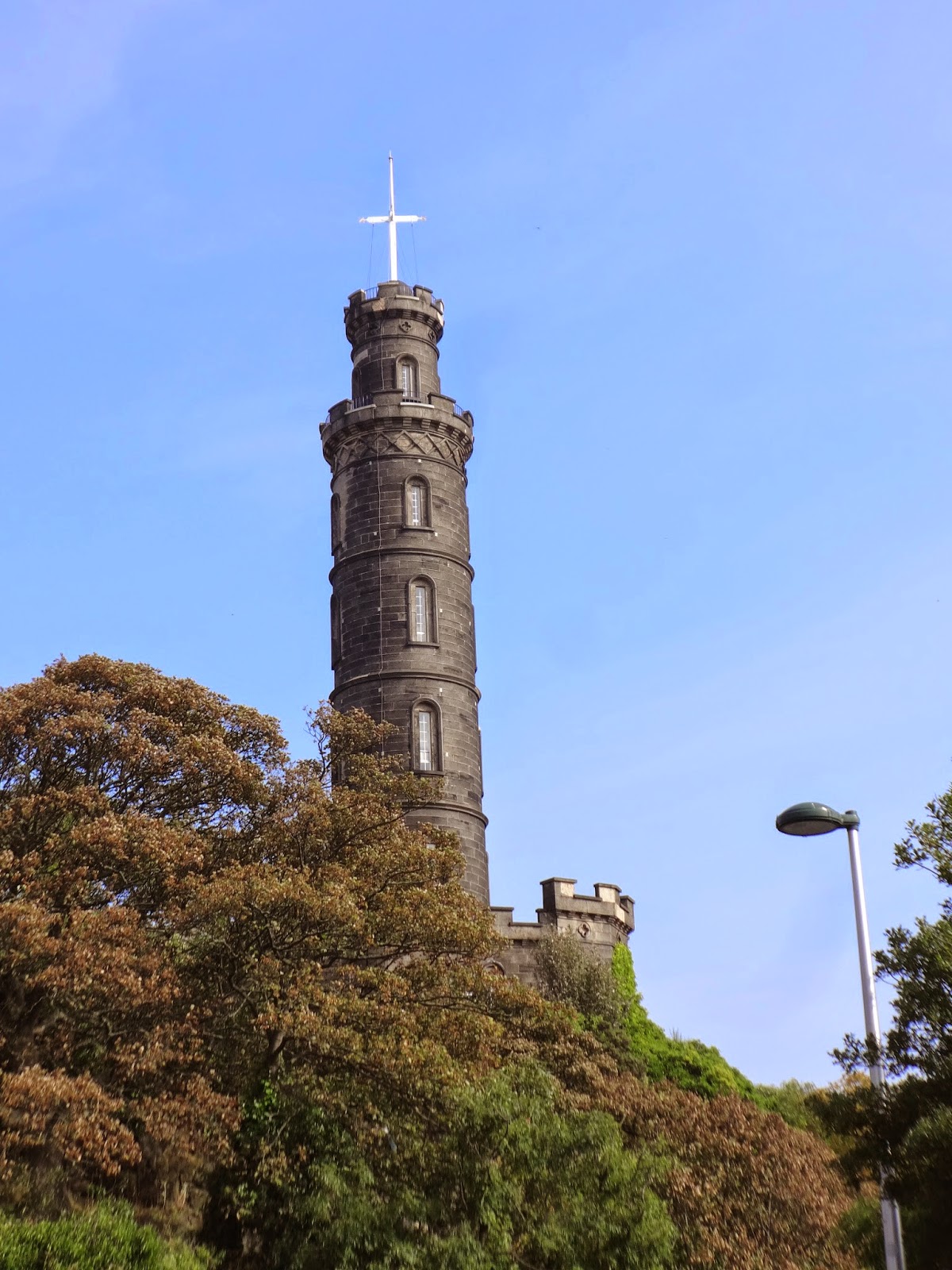 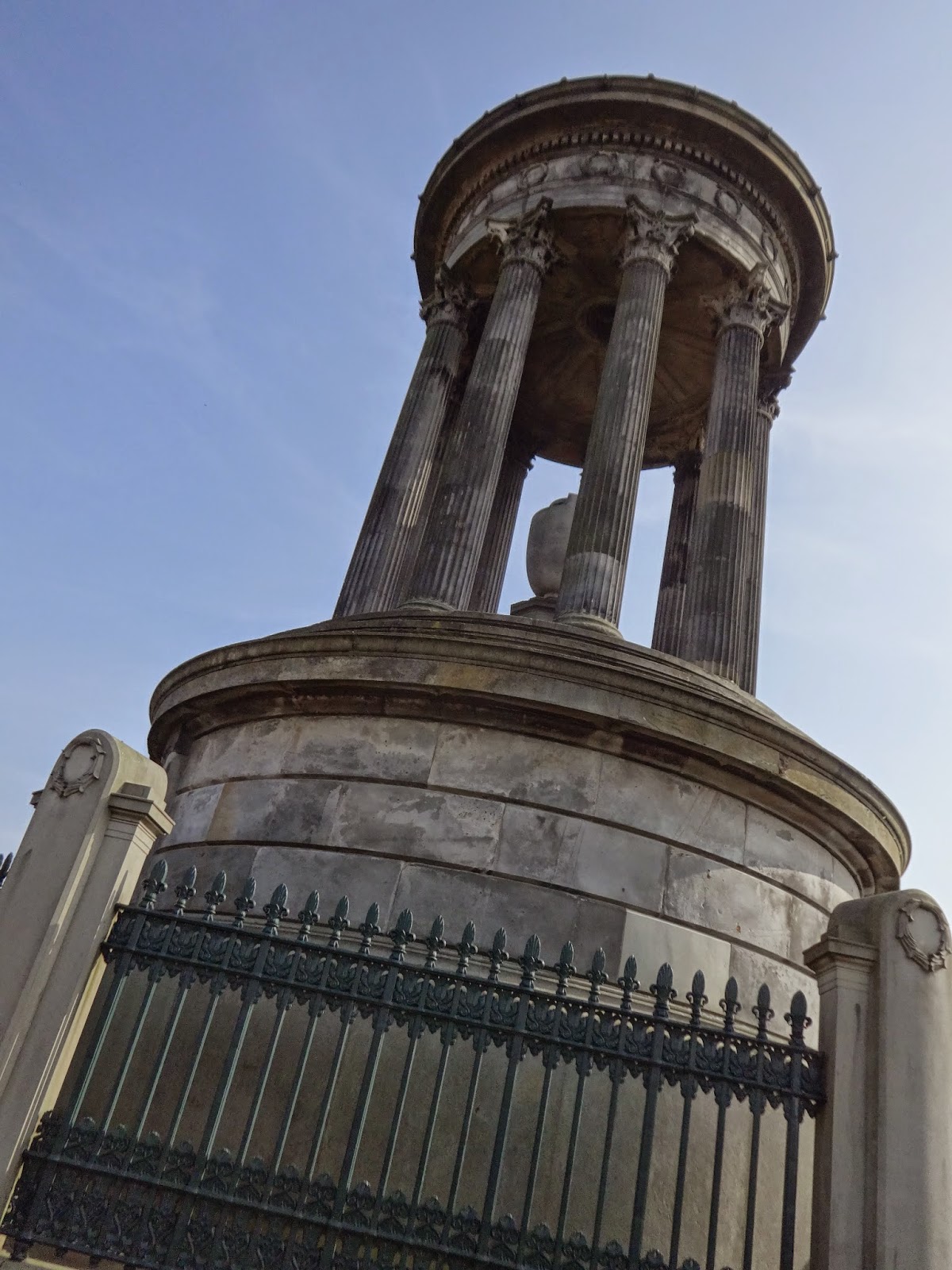 Also, these giraffes greeted me each time I walked to, and stumbled back from, CC Blooms.  They are cute and adorable and lovable and I want to share them. 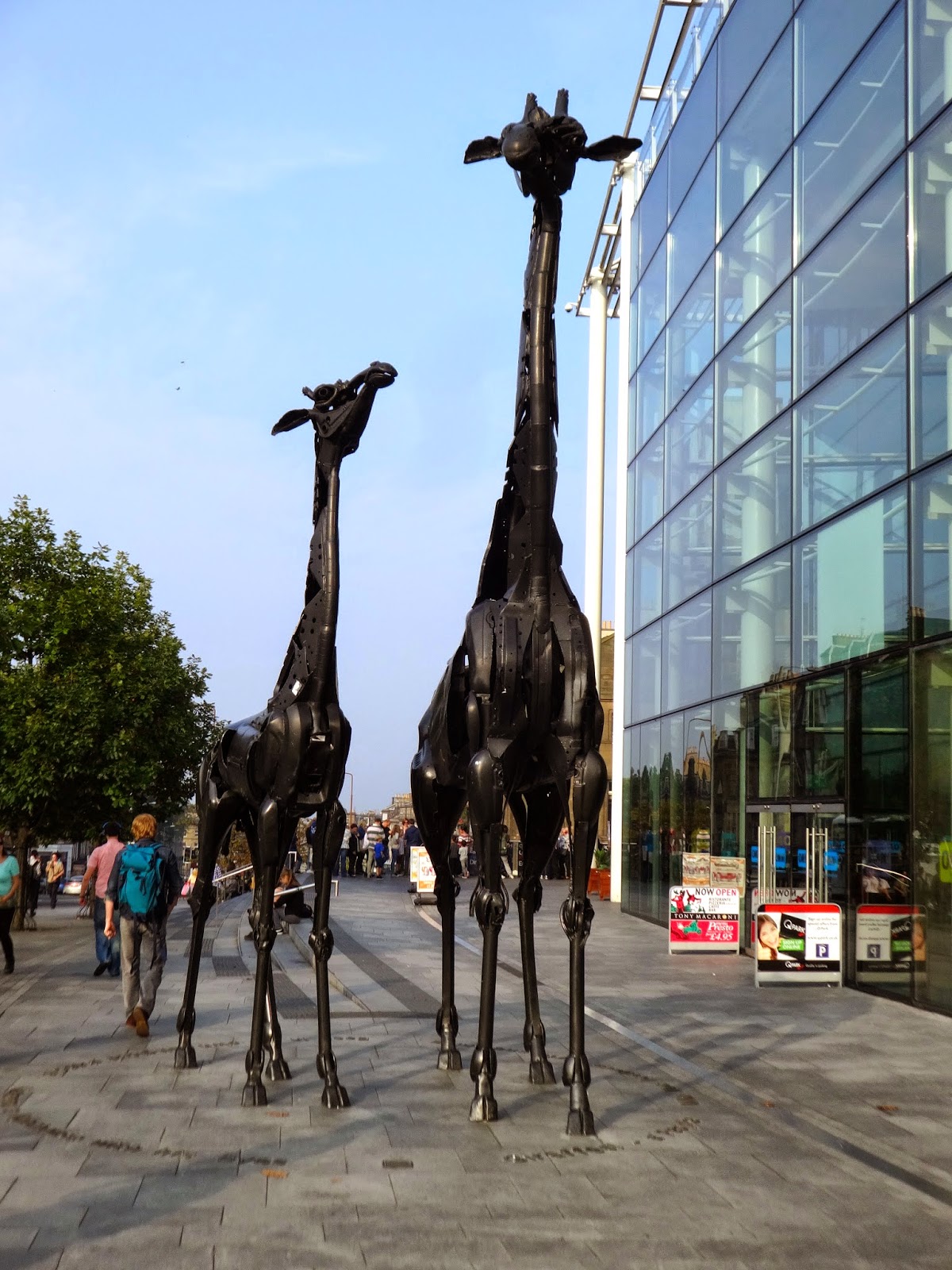 On our last day of vacation, we said farewell to Edinburgh and hello to Glasgow.  In hindsight, I'm very disappointed that we didn't sing "Super Trouper" as we crossed into the city limits.

This was very much just a pit stop for lunch (Anwarul and I share an OCD that includes the need to eat at all Hard Rock Cafes and then buy merchandise....this was the fourth HRC in two weeks.  Ugh.) ((My OCD now wants to clarify for you that the other three were in London, Manchester, and Edinburgh.)) that incorporated a brief stroll through the city center.  So brief, in fact, that I can't seem to find any photos of US there.  Anyway, here's what we saw: 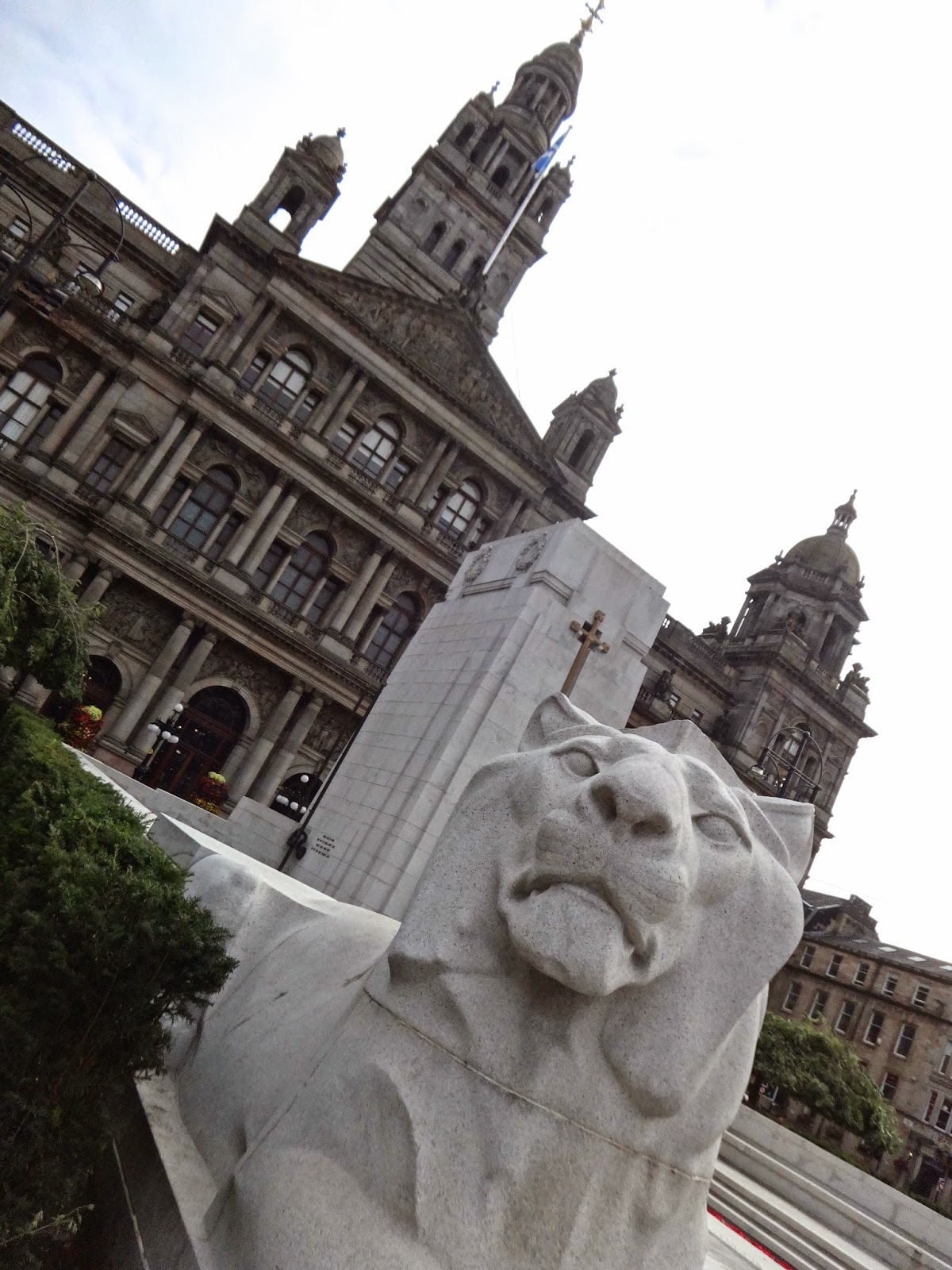 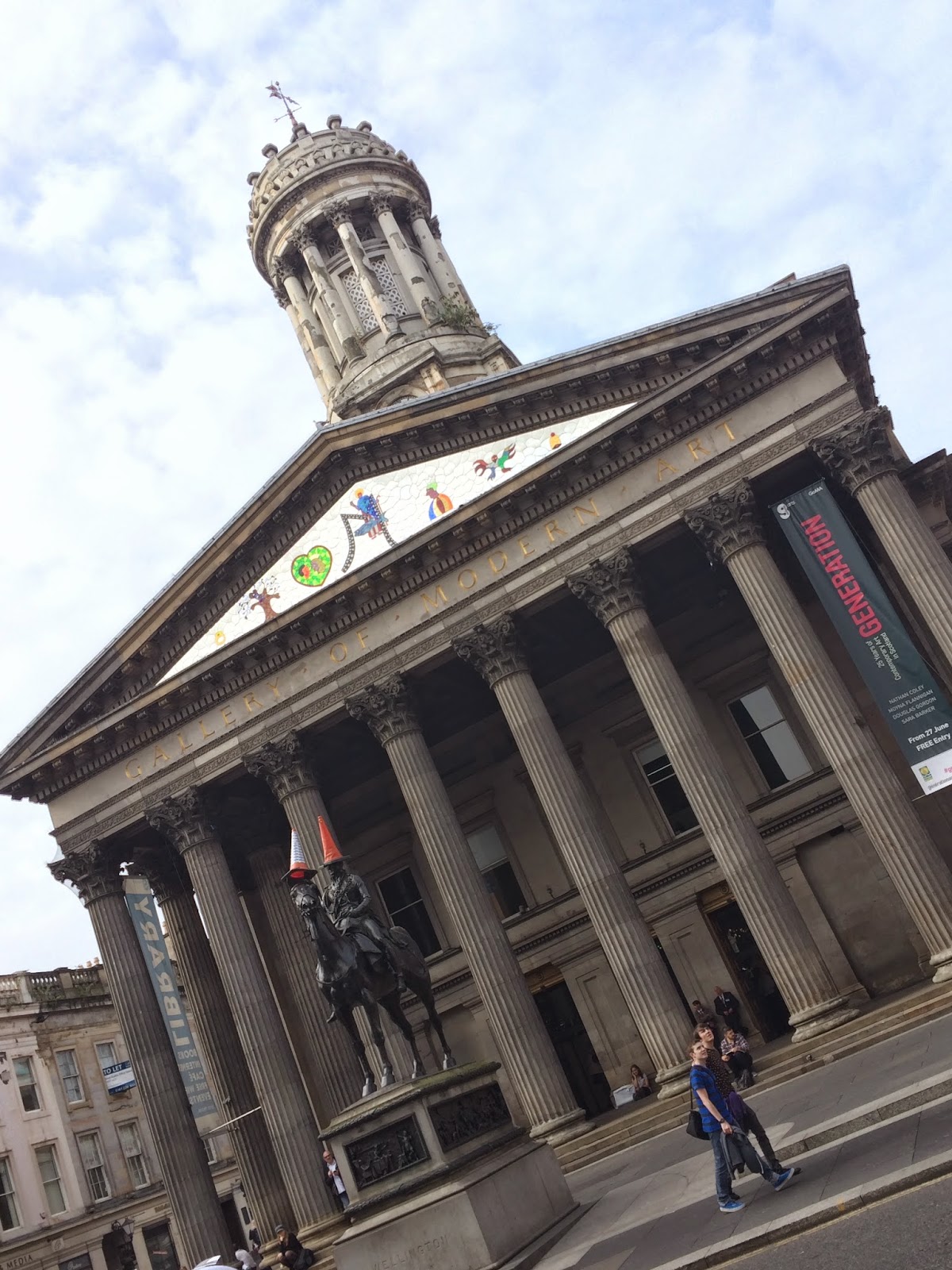 Glasgow City Chambers is located in George Square.  The building was constructed between 1882 and 1888 and has been the headquarters of the Glasgow City Council since 1996.

The Gallery of Modern Art is the main gallery of contemporary art in the city, and contains some of the most unappealing and awkward examples of modern art that I have seen to date.  BUT!  The museum offers a program of temporary exhibitions, so chances are it has all rotated out by now.  And I'm sure you've hear the expression "We can only go up from here."

The most interesting aspect of our trip to Scotland was the fact that it occurred during the days leading up to the vote on the Scottish Independence Referendum.  The streets of Edinburgh and Glasgow alike were filled with campaigners.  My personal observation was that Edinburgh was for and Glasgow was against the referendum.  It also seemed as if Glasgow skewed younger in terms of who was out on the streets preparing to rock the vote.  This could be true or not, as factors such as time of day and location within the city could certainly turn those observations on their heads.

Five days after leaving Glasgow, voters answered the question of whether or not Scotland should be a country independent of England.  The "No" side won with 55.3% of the vote. .

We understood when we began planning this R&R that our eyes were getting bigger than our allotted time in terms of just how much we could see.  In fact, the plan had initially included Dublin as well.  Without extending by two additional days and introducing some alternative mode of transportation, that would have been completely impossible.  In the end, Dublin was cut, along with one or two other sites within England that we had either thought about beforehand or during the trip.

On the backend of things, I personally feel that we still did too much.  In reviewing my iPhoto albums in preparation for writing this blog, I was struck by how blurry and/or poorly framed many of the photos were, as well as by how few photos were taken at certain sites.  One can just sense that we were in a hurry.  Of course we were! Did you see how much we did?

We've never attempted a vacation in which we had to travel to and from so many places, that were located such a great distance from each other, before.  Was it a failure?  Absolutely not.  This was one of our best trips ever.  Could it have been managed better?  Sure.  A show or two less, and we could have ridden the London Eye.  Removing Glasgow could have provided more time in Edinburgh.  Less clubbing at night could have convinced us to wake up earlier, thus having more time for all sorts of things.  Etc., etc.  But isn't that usually the case?  You always become a subject matter expert after the fact.

With that said, I regret nothing.  It as a wonderful trip spent with wonderful people.  I saw enough amazing things to make it worth the while, and left enough undone to warrant a return visit.

And as consistently far behind as my writing remains, I'm simply elated to have finally finished chronicling this particular journey .

Coincidentally, Anwarul is visiting Jerusalem this week.  We've explored lots of sites both new and old and can but hope that we've been half the hosts for him that he was for us.
Posted by Aaron at 1:53 PM