"Doggone It!," or Preconceived Notions 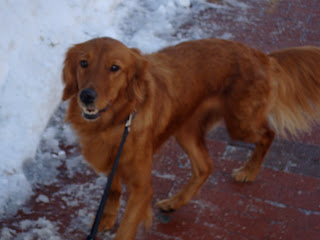 Chloe, I owe you an apology. You came into our lives after Zelda. Zelda, the weak, frail beagle/jack russell mix who from day one was sick and wanted nothing more than to cuddle. Zelda, who, after months of illness was a healthy, smart, intelligent puppy who still wanted nothing more than to cuddle. Zelda, who can understand English. Let's never underestimate her ability to understand every word spoken to her. Zelda, who, even in this photograph, freezing cold on her first ever snow day, looks so smart and sophisticated. Zelda, the jealous, who from the moment she saw you decided to be even more adorable and lovable, just to spite you. 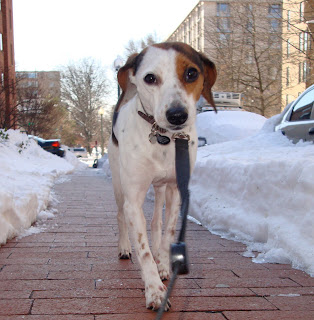 It would be hard for any dog, no matter how wonderful, to live up to those expectations. Even more so for you. Chloe, the Golden Retriever, destined by genetics to be a toddler for the first several years of your life. Chloe, the awkward, whose long legs and shaggy tail are more destructive than you realize. Chloe, the undisciplined. What Zelda knew instinctively, you could never learn by repetition or scolding. Chloe, the sad. Your destructive tendencies resulted in more crate time for you than was fair. But look at you now. On your first snow day, you look happier than at any other time in your life. You are now Chloe, the alert. Chloe, the stimulated. Chloe, the happy. You have taken so quickly to the cold weather. You were the first to overcome your fear of the snow. What took Zelda almost two days, you learned in one. How to do "your business" in the snow; how to walk in the snow; how to jump in a snowbank so that people can pass on crowded sidewalks. Where Zelda shivers and barks at strangers, you smile and frolick. We have always known that Zelda was a lapdog. We just didn't realize that you were a city dog. I apologize for this disservice. Sure, I just took a half-chewed bar of soap away from you. You will never be perfect. But I love you both, flaws and all.
Posted by Aaron at 10:17 PM

Email ThisBlogThis!Share to TwitterShare to FacebookShare to Pinterest
Labels: Pets