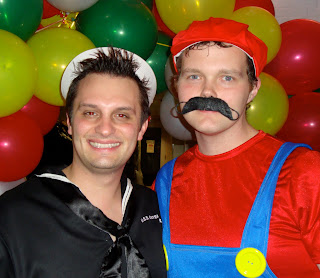 Moving to, or visiting, a new place brings with it the responsibility of learning about the local culture, finding the things you like, and absorbing as much of it as possible before you leave. Add to that a recently discovered interest in Judaism, and you've got TJ the sailor and me dressed up like Super Mario at a Purim Party.
Purim celebrates Queen Esther, who hid her Judaism from her husband, King Ahasuerus. When the king's evil prime minister, Haman, asked the king to approve the execution of all Jews in the empire (to punish Esther's Uncle Mordecai, who refused to bow to the minister), Esther revealed her true nature and saved her people. Part of the Purim tradition is to get so drunk that you can't tell the difference between Haman and Mordecai. Sounds good to me!
The DC Jewish Community Center played host to GLOE's Third Annual Masquerade & Mischief Purim Party On Saturday, February 27. GLOE (The Kurlander Program for Gay & Lesbian Outreach and Engagement) did a marvelous job retelling the Purim story through a modern-day fairy tale featuring drag queens and kings lip syncing to the music of Glee and Lady GaGa. Drag is an important part of the Purim tradition, and even rabbis are known to participate. In fact, everyone is encouraged to wear a costume of some sort, giving Purim its reputation for being "The Jewish Halloween."
The event also featured a special appearance by the DC Cowboys, the nationally famous Broadway-style dance group.
Having grown up in a small, Christian-dominated conservative town in the Republican-dominated Texas, this was far from the type of event that I would have ever expected to find at a faith-based community center. Drag Queens? Gay Cowboys? Encouraged drunkenness? Did I mentiona Haman PALIN? Surely there was a mistake.
But, of course, there was not. The Jewish faith is all about respect for one's self and for one's community. It is an impressively tolerant faith that welcomes people from all walks of life, regardless of age, race, gender, or sexual orientation. Why, they even believe that there is room in heaven for non-Jews, too. Acceptance abounds. Questions are encouraged. Fun is allowed.
Purim does not set the standard for Jewish holidays, of course. Most Jewish holidays are very personal, very spiritual affairs. The feasting and partying of Purim is designed to be the polar opposite of Yom Kippur, during which Jews fast and spend much of the day in synagogue seeking forgiveness for the year's transgressions.
Prior to leaving Orlando, we attended a few Shabbat services and are currently taking an Introduction to Judaism class at DC's Temple Micah. I'm not certain if religious conversion is in my future, but I am fascinated by the culture and quite eager to learn more.
What does it mean to be Jewish? What are the other holidays like? Why do so many people go to these parties dressed like Mario? 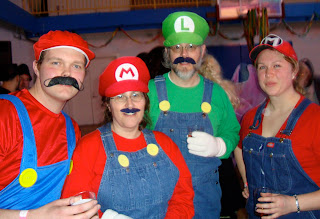