365 Challenge, Day 6: It's a bird! It's a plane! It's poorly conceptualized retail space! 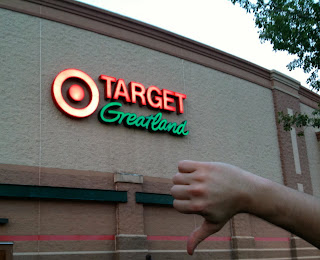 TJ leaves for Quito, Ecuador tomorrow morning for a 16-day immersion program to help improve his Spanish for our upcoming move to Mexico. He found himself in need of a few essential toiletries, so after a delicious dinner at a local Irish pub we headed to our friendly neighborhood Target Super Center.
Only, it isn't a Super Center. It's something...less...called Target Greatland.
Look up Greatland in any dictionary, and the definition will surely be: "Not as awesome as a Super Center. Does not carry baked goods, produce or many items requiring refrigeration. Does the bare minimum to avoid being a 'regular' Target."
I asked a cashier at one of the nearby Greatlands if there happened to be any Super Centers in the area shortly after we moved here. She looked at me as if I had two heads.
Perhaps there is a light at the end of the tunnel. Tonight, we found this sign posted in numerous locations throughout the store: 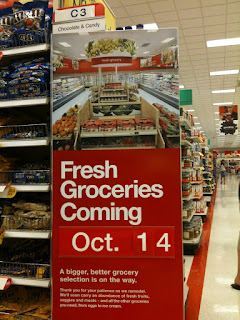 Construction was definitely in progress. From what I could tell, the refrigerated section will be on the complete opposite side of the store from where the other foodstuffs are, taking up space previously occupied by 1/2 of the toy department, which has now relocated dead-center in the Menswear department. Not sure where the clothes are going, but as TJ pointed out, they will probably sell more milk than Wranglers, anyway.
None of this is important. It does, however, make me start thinking about how different life will be in Mexico. When I moved to Florida, I immediately noticed the absence of some of my favorite restaurants and retail chains from Texas. TJ's favorite thing about going home is Alabama BBQ. We have a friend in Spain who craves Chex Mix, while I crave Spain's Cheetos. Our friends in France pack an extra suitcase just so they can haul Abercrombie's summer line back home with them. TJ and I both prefer Europe's Coke Light to anything we have in the states.
I may not like Target Greatland, but at least it's a Target. What am I going to do when I move to Mexico and all I've got is Wal-Mart?
Oh! As for the title of the thread, look at this cute gift card I found at Greatland. I'm not sure I agree with the unnecessary tree murder, but the plane was fun to play with. 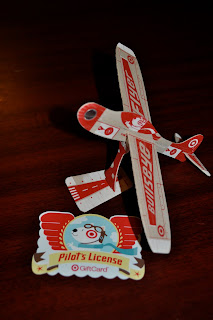