One of the things I wanted to do during Alfie's visit was take him to one of the nearby amusement parks. We're both Orlando boys, so we're used to theme parks on every other corner. I figured it would be fitting. Of the three options available to us (Kings Dominion, Six Flags America, and Busch Gardens Williamsburg), I opted for Kings Dominion, as TJ and I already have Season Passes, and I'm kinda cheap.
Alfie decided this morning that he wanted to give the skycoaster a try. For the uninitiated among you, a skycoaster is an attraction in which riders are hauled to the top of a launch tower and then dropped to the ground, where they swing on a cable tether until brought to rest. Perhaps the most important thing to know about a skycoaster is that they are operated by third party vendors. What this means is that despite having paid $40+ dollars for park admission, you STILL have to pay to ride the skycoaster.
It has always been my personal policy to never pay for rides inside a park that I have already paid to enter. It just feels...wrong. Alfie, however, does not agree. And with that in mind, I fully intended to let him flail in the air to his hearts content as I watched from the cost-conscious ground. When he went to purchase his ticket, however, he learned that, if I were to ride with him, he would save six dollars on his own admission. Always up for the perception of cost savings, Alfie agreed to pay $23.99 for my admission so that he could "save" $6 on his own.
It was at this point that I learned something about myself. It was never the $29.99 entry fee that bothered me ($23.99 with a buddy!!!). It was the 153-foot drop. I had no idea that you could hide a fear of falling behind a frugal facade.
The damage was done, the ticket purchased, the harness secured. No backing out now. A guy has to keep up appearances after all. So up I went. And down I fell. Screaming all the way. 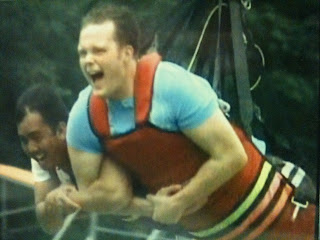