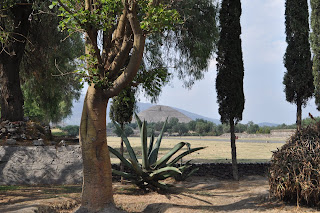 If you were to head 40 kilometers northeast of Mexico City, or what we shall now and forever refer to as the "Gee-that's-pretty-but-I-sure-wanted-to-see-Tenochtitlan" City, you would run into a magical little place called Teotihuacan.
And if you're a sucker like us, you might pay a local guide 500 pesos to show you around. You might even be as surprised as we were to discover that this was 500 pesos well spent. We learned all sorts of things that the ravages of time will cause us to forget.
Established circa 100BCE, the city is thought to have lasted until somewhere between the 7th and 8th centuries, CE. In 1987, it was indoctrinated into the registry of UNESCO World Heritage Sites. It is the third such site we have visited since arriving in Mexico (see Post Labels below) 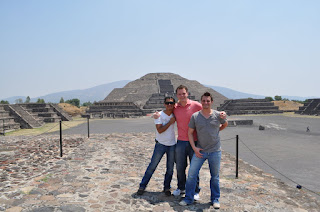 Our tour guide informed us that the Aztecs discovered Teotihuacan (The City of the Gods) as they searched for what would ultimately become Tenochtitlan, but that they did not actually build the city. It was already there. As for who is responsible for the construction, that's a question we may never know the answer to (insert spooky music here). All that is known is that some Aztecs sojourned forth toward Mexico City...and some stayed behind.
After the tour our guide took us to a small compound at which we were taught about the practical, non-Tequila uses for Agave. Apparently, it was both an early form of paper (peel the stalks) and needle and thread (break the tip off, thread it with shredded Agave stalks).

We then received a presentation about precious stones that can be found in Mexico (and the art that is made using them), after which we were invited to shop (ah! the catch!) their art gallery. We're suckers, so of course we bought stuff. Our friend Vicente bought a stone turtle carved out of obsidian, while we bought a little totem-man, carved from the same. 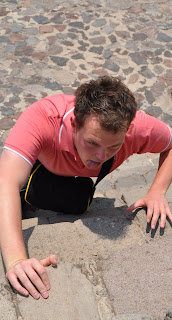 We then returned to the archaeological site, where we were able to climb half-way up the Moon Pyramid (Can't go to the top anymore because an old white lady fell down and died. Tour guide said that plenty of Mexicans have fallen to their deaths, but it took an American dying before safety regulations were put in place. Sad, if true.) and all the way to the top of the Sun Pyramid (I guess no old biddies have busted a hip on this one yet).
The climb, she was a tough one. Lots and lots of teeny, tiny stairs. All close together. Tall, yet skinny. It was kind of scary, and the hand rails are mega-flimsy. At one point, to get down, TJ sat on the ground and butt-scooted all the way to the bottom. Has a bit of a problem with heights, that one. He likes to keep it a secret. I didn't even know until Fall 2009 when he flipped out in the Eiffel Tower. He really likes to keep that to himself.
Oops.

Above you will see the Moon Pyramid (left) and the Sun Pyramid (right). Our guide told us of a small metal marker that lies at the top of the Sun Pyramid. He advised us that, were one to touch the marker while holding an object crafted from onyx, one would receive special powers...which I will fully admit is our reason for buying our little souvenirs earlier in the day. Damn, he's good.
Below you will see the Temple of the Feathered Serpent, aka The Temple of Quetzalcoatl, aka the Feathered Serpent Pyramid. Standing directly in front of it is The Adosada Platform. The remains of over 200 human sacrifices have been found beneath the Temple, which was named for the beautifully rendered carvings that decorate its exterior.

Well, after attempting human sacrifice, calling on the Power of Grayskull...

...presenting oneself, and stabbing each other in the back...we got nuthin'.
Maybe that tour wasn't worth 500 pesos after all.
Posted by Aaron at 4:12 PM