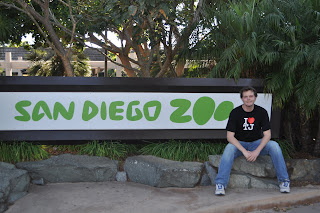 July 20th, the first full day of my California adventure (no, not that California Adventure. But I did make my way to Disneyland later in the week...), saw me heading to the San Diego Zoo. And, thanks to my friend Evan, who "knows a guy," I was able to walk through the entrance with a complimentary ticket. Which is a good thing. I don't care what zoo you are. You are not worth $40 USD.

Yeah, I said it. I guess I've been spoiled by the cheap-to-free zoos located in Mexico and Washington DC.

But if you can ignore (or avoid) the lofty entry fee, you will definitely find yourself in one of the most impressive zoos you're apt to ever visit. 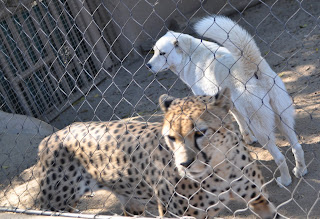 The absolute most amazing thing about the San Diego Zoo, and the first thing I want to talk about, is actually one of the last things I saw during my visit. It's such a modest, unpresumptuous exhibit that I almost missed it entirely. And Evan, making his third visit to the zoo, was seeing it for the first time. In a small holding area (sounds better than "cage," right?) towards the back of the zoo there's a whole lot of inter-species mingling going on.

Bakka the cheetah and Miley the husky mix are part of the zoo's animal ambassadors program. Basically, this means that baby cheetahs and wolves are thrown into cag--holding areas with puppies of a similar age. They play, eat, and sleep together, which results in a deep bond of friendship that lasts a lifetime. Apparently they are raised so that the dog fills the alpha role in the relationship, and the savage beast follows its lead. Unless it eats the dog, of course.

The rest of the day, was filled with your typical zoo fair. And lets face it, I've already blogged about zoos. So bear with me while I share the highlights. 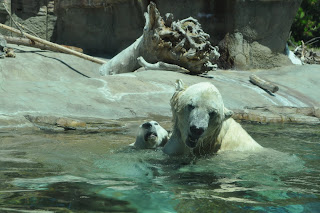 The SDZ's Polar Bear habitat offered me the closest view I've ever had of a polar bear. There were two of these galoots in there, and I had no idea how ginormous they actually were. They seemed to be playing. Or possibly mating. Or maybe trying to kill each other. Never could tell, but they looked totally adorable while doing it.

Artificial Polar and Panda Bears make a nice segue
between discussions of the real deal...

The SDZ also offered the best view of a Panda Bear that I've ever had. And they should. Lord know they tout the creature's presence here as their biggest selling point. Pandas are an endangered species, and only a dozen or so reside in North American zoos. Of those five zoos, four are located in the United States. The other is located in Mexico City. Of the three remaining North American zoos, I have visited one: The National Zoo in DC. Knowing that I have seen 3/5 of the Panda Zoos on this continent, I am pained at having never blogged about the National Zoo. Must have visited during one of my moody, non-blogging periods. Sigh.

Gao Gao the Panda has, at 19 years old, fathered four cubs by natural mating. Not sure how many he's had by unnatural mating, but I wonder if that's where Koalas come from? 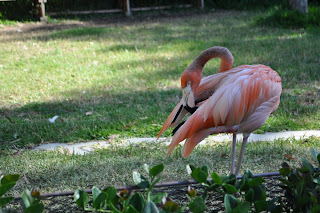 Flamingos are birds. And birds are filthy creatures.
But this is a pretty fabulous shot, I think.
Random photo insertion, as I have nothing else to say about it. Ta-Dah!

What you see here is a tired Mamma Rhino. And an amorous Daddy Rhino. He kissed her booty. He caressed her flank. He nibbled her ear. He pushed and shoved and she just wouldn't yield. Mamma had a long day and she wasn't in the mood. Finally, dejected, he walked away with shoulders slouched. And that's when I learned waaay too much about the anatomy of the male rhino. I won't diminish the wholesome nature of this (generally) family friendly blog by going into detail. But feel free to satiate your blatant curiosity and utilize our good friend, Google. 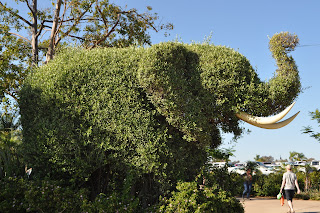 The zoo is huge, and in the end I wasn't able to see all of it. But it was still a great day at the world's most famous zoo, even if the only elephant (one of my fave zoo animals) I saw was this topiary.

Oddly enough, it wasn't the last artificial elephant I would see on this vacation. But more on that next time...when we head to San Diego Comic Con 2011.
Posted by Aaron at 3:53 PM