I woke up this morning to the sound of something we all dread: the alarm clock. The next thing I heard was even worse. "Aaron...please help me..."

It was coming from the bathroom.

I opened the door to our master bathroom to find TJ lying flat on his back in a pool of his own sweat.

He had begun to feel nauseated just before dinner yesterday evening. The trend had continued throughout the night.

Frequent trips to the loo, a couple of cold showers to beat the sweats, unintelligible thoughts, and chattering teeth. This seemed fairly normal to me. If there's one thing TJ does not do well, it's be sick. He's had food poisoning before, so this was nothing knew. Heck, I've even found him sprawled out on a bathroom floor before.

The new part was having all of this happen in Mexico. We've both been lucky so far. I've had nothing more than the occasionally irritated digestive process and TJ himself was able to beat back a much less severe case of food poisoning early in our stay here thanks to some probiotics donated by a neighbor.

But today looked like a trip to the hospital was in order. 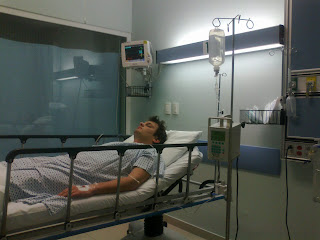 Apparently, the doctor thought so too. Three and a half hours, three intravenous infusions, three abdominal x-rays, two prescription medications, and $500 dollars later we were on our way home with only one thought on my mind:

"Geez, I am SO glad that my Spanish is improving."

I had expected to be nothing more than the chauffeur for today's excursion...yet I often found myself in the role of interpreter.

When a family makes the decision to join the Foreign Service, the only person that is required to learn the language spoken at their onward assignment is the officer him/herself. Even family members that work at the Embassy/Consulate like myself rarely need much skill in the host language.

That's how we justified my continuing my prior employment while TJ attended his six month language training last year.

But what do you do when your beloved officer is incapacitated and you find yourself in a hospital encountering what feels like the first person in eight months that doesn't speak English?

You find out (hopefully) that your own skills have been improving after all, that's what.

TJ was awake, yet slightly incoherent. His 3/3 Spanish language ability meant nothing today.

"He wants to know if it hurts when you walk," I would say, to my own surprise.

This would continue as TJ was asked when he last ate, and if he had any allergies.

When TJ was taken away for x-rays, the doctor asked me additional questions.

To my complete shock and awe, I was able to effectively (if not accurately on a grammatical level) have this important medical conversation in Spanish.

But what if I hadn't been able to? And what if something worse had happened and TJ wasn't able to communicate at all?

That's the take-away today folks. If your family is joining the Foreign Service, it is everybody's responsibility to learn how to effectively communicate.

Today we were lucky. Next time, a life might depend on it.

As for TJ, he's recuperating nicely and looking forward to getting back to work.