For those lucky enough to have children, this moment may occur while watching a much rehearsed yet comically disastrous middle school ballet recital. For others, it could happen at the climax of a Broadway show. For most of us, it happens while watching an episode of So You Think You Can Dance.

Hey, I’m not judging. I love SYTYCD, and I’ve spent many an hour slack-jawed and/or crying over one routine or another. But for the last two years, such emotions have been reserved for Mexico’s native folk dances, known as the Ballet Folklórico.

These traditional dances are performed in a variety of locations and we have had the opportunity to see numerous shows while dining at restaurants such as El Abajeño, riding the Tequila Express, and enjoying resort stays in Nuevo Vallarta and Manzanillo. One of our favorite venues is Teatro Degollado, where every summer the University of Guadalajara hosts a professional dance series spotlighting traditional dances from selected states. The chosen states vary by season, but Jalisco always closes the show to great fanfare.

Mexico’s most popular troupe, the Ballet Folklórico de Mexico, was founded in 1952 by Amalia Hernández and performs regularly at Palacio de Bellas Artes in Mexico City. The troupe was named the official folk dance company of Mexico in 1970. Following her death in 2000, Amalia’s grandson Salvador López took over as group director. Alas, our 2011 trip to Mexico City did not allow for a viewing of this legendary dance company, though we did manage a quick peak at their beautiful performance venue. 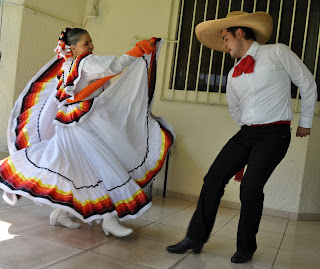 At work we are honored to have two dancers with a strong background in Ballet Folklórico. In another life, Ricardo performed with the University of Guadalajara’s traveling troupe, where he danced in shows in the nearby cities of Puerto Vallarta and Ciudad Guzman, as well as at events such as Nuestra Belleza Jalisco, Aniversario de Guadalajara, and La Feria Internacional de Mariachi. Adriana has been performing with her dance troupe, Grupo Decanos Nueva Imagen, for the last seven years. Both performed a dance number for us at a farewell party for departing officers organized by TJ last summer, and Adriana invited us to the final show of her season last night, which was quite a treat: One, because it’s always fun to see someone you know shining in their element, and two, because the three hour show represented a greater number of dance styles than your typical Teatro Degollado show.

The beauty of these native dances cannot be captured in words or pictures, but I would like to share some of them with you all the same. What follows is not an all-inclusive list, but rather what I consider to be the highlights of Ballet Folklórico.

Danza de los Voladores (The Dance of the Flyers) can be observed on most weekends along the beachfront in Puerto Vallarta. The show is free, but as with most free services it is polite to tip. This ancient Mesoamerican ceremony consists of a dance followed by five participants climbing to the top of a 30 meter pole…from which four of the five launch themselves to the ground, tethered by ropes. The remaining dancer sits atop the pole playing a flute and/or drum. Legend tells that this ritual was an offering to the gods in exchange for the end of a severe drought. The ceremony is classified as an Intangible Cultural Heritage by UNESCO.

Danza de los Viejitos (The Dance of the Little Old Men) originated in the state of Michoacán. Participants in this dance disguise themselves as old men dressed in traditional clothing and walking with the assistance of canes. Wood-soled shoes help to accentuate the noises made while stomping around on stage.

In Veracruz, lovers dance "La Bamba," in which they must successfully tie a red scarf or shawl known as a rebozo into a bow, using only their feet, to prove the strength of their undying devotion to one another.

Another dance from Veracruz, The Dance of the Witch (La Bruja), is a beautiful yet haunting piece in which the lights are dimmed and female dancers place candles upon their heads as they glide softly across the stage. Through this dance we see life through the eyes of a woman in love, dazed and paralyzed, unable to go about her daily business. Alternatively, I’ve heard it told as the story of a witch that swoops down and steals women’s souls. Which I guess is kinda the same as falling in love.

The Jarabe Tapatio is undeniably the most famous of all folklore dances in the United States, where it is known as the “Mexican Hat Dance.“ The dance tells the story of the courtship of a woman by a man, and was banned by 19th century colonial authorities due to its implied sexual nature and challenges to Spanish rule inherent in the dance. The male will typically wear a charro suit, while the woman dons a “China Poblana” outfit that pays homage to a dress worn by an Asian woman famous in Puebla’s colonial period. 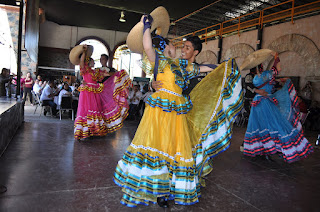 Many shows end with Jalisco’s Dance of the Snake (Baile de la Culebra), a fun follow-the leader affair in which male dancers form a line and weave a winding path around the women, slapping imaginary snakes on the ground with their sombreros. One male dancer will always throw himself at the women, who have knelt on the floor and joined hands to form a net with their dresses, at the song’s conclusion.

I will stop there for the sake of brevity, yet even as I do so other favorites come to mind.

Each of the dances above have, at some time or another, prompted an emotional response from me.

Danza de los Voladores makes me cringe with anticipation. Danza de los Viejitos makes me giggle. So does La Bamba, when the dancers have difficulty with the knot. La Bruja simultaneously upsets and calms me for reasons I can’t explain. Baile de la Culebra always makes me smile and reach for the camera. And Jarabe Tapatio makes me proud to live in Guadalajara.

Well, that and hearing an enthusiastic Mariachi belt out the words to "Guadalajara," or hearing that Chivas won another game, or watching the leaves change colors and the flowers blossom in Bosque los Colomos. 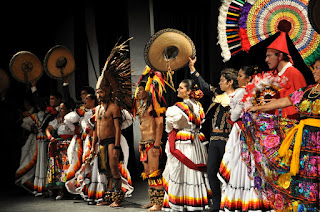 And many people on the outside don't understand it, but that’s why the U.S. government requires that we hop around every 2-3 years. We get so involved in our lives abroad that it becomes necessary to take a step back and remember our roots.

And that’s okay. When I look back on my life, music has always played a defining role, and by extension, dance. That won't be any different when I leave Mexico.

But the bar will be set that much higher for having lived here.
Posted by Aaron at 8:30 PM