Cocula: The Cradle of Mariachi

With slightly more than two months left here in Guadalajara (two months and three days, to be precise) we are doing our best to hit any remaining highlights while also spending lots of time with our friends. Early last week I was cleaning my desk at work and came across an old, dusty Post-it note that said "Cocula - Birthplace of Mariachi" that I had apparently scribbled some months ago. Now, I can't remember who, but somebody at work must have suggested this as a place to visit. "Why not?" I thought, and we made plans to visit the town this weekend with our friend Alex, who recently returned to Guadalajara after a summer spent at home in Guanajuato.
Located approximately 35 miles southwest of Guadalajara is the little town known as "La Cuna de Mariachi," or "The Cradle of Mariachi" for us gringos. Visitors to Cocula are greeted by this statue that boasts the town's one claim to fame.

I'm glad it's a pretty statue. Because there's not much else to see. And the mysterious co-worker better hope I never remember his or her identity.
There was, of course, the standard town plaza with the church, gazebo and government building. Unfortunately for Cocula I've seen a ton of these over the last two years, and even the pretty ones get less impressive as time goes by. There was a mass going on, and from the crowd gathered at the door I can only assume that there isn't sufficient seating inside for the current number of sinners in town. Needless to say, we didn't get much of a view of the interior, but it seemed pretty enough. Downright beautiful considering the facade. 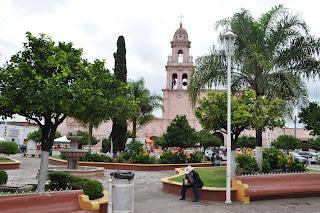 After checking out El Centro, we headed over to Museo del Mariachi, which is open Tuesday - Sunday from 10:00-2:00 and 4:00-6:00. Despite the free entry, I don't think it sees a high volume of visitors. The guard at the entrance had to get up and turn on all of the lights when he saw us coming.
The museum exhibition consists of two modest rooms containing a sparse collection of records, costumes, instruments, and newspaper clippings. We made the most of things and feigned excitement for the memory book.

It wasn't a total loss. One old photo provided irrefutable evidence that in conservative Mexico, even the most manly of Mariachi bands is accepting of homosexual bandmates. 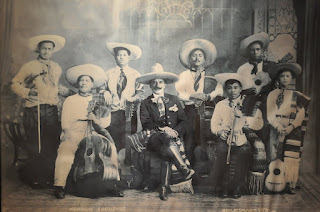 Hint: He's in the middle.
All kidding aside, the museum did feature a fairly nice mural...

...whose beauty was summarily tarnished by the open drainage grate and unattended bucket of dirty mop water that sat directly below.
As we were leaving the museum, the security guard (as he was turning the lights back off) tried to advise us of other places of interest, using free public restrooms as his only points of reference.
In hindsight, we should have known this was only going to be a so-so adventure when, earlier that day, a wrong turn found us paying $232 MXP in tolls on a road we didn't even need to be on.
I didn't see one single Mariachi band in Cocula. So, yes. Mariachi came from there...but I think they left as quickly as they could.
On the bright side, we ate at P.F. Chang's and saw Katy Perry: Part of Me following our hasty return to Guadalajara. So it's not all bad, right?
Posted by Aaron at 5:28 PM