Julia Child will always be an important part of my life…and until today I had never even followed one of her recipes (I baked Julia's herb biscuits to accompany TJ's chili dinner...yum!).

Julia Carolyn McWilliams was born in Pasadena, California on August 15, 1912. She was the first of three children. Her father was a Princeton University graduate and a prominent land manager. Her mother was a paper company heiress.

She joined the Office of Strategic Services (OSS) during World War II after discovering that her towering 6’2” frame disqualified her from enlisting in the Women’s Army Corps (WACs). She began her career as a research assistant in Washington, D.C., but in 1944 found herself posted in Kandy, Ceylon (modern day Sri Lanka) and responsible for logging and channeling classified communications for the OSS’s secret stations in Asia. It was during this time that she met and fell in love with Paul Cushing Child, a fellow OSS employee. They tied the knot on September 1, 1946.

Paul joined the United States Foreign Service and the couple found themselves moving to Paris in 1948 when Paul was assigned as an exhibits officer with the United States Information Agency. Having left a career of her own, Julia now found herself lacking direction. That didn’t last long, though. A love of food and a passion for cooking provided Julia with the drive that she needed to pursue a new dream. Today she is one of the most recognized chefs in America, not to mention a beloved author and television personality. Julia passed away on August 13, 2004.

The 2009 movie Julie & Julia (Columbia Pictures) details her long and often disappointing journey as she sought a publisher for her book, Mastering the Art of French Cooking (Knopf, 1961), and simultaneously draws parallels to the life of Julie Powell, an internet blogger shamelessly attempting to replicate all of Child’s recipes through the course of one calendar year. 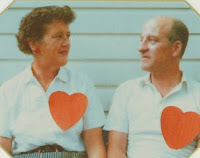 I saw this movie with our then-roommate Kris at an advance screening offered at one of Orlando’s many theatres on July 21, 2009. I knew nothing about Julia Child, or Julie Powell, going into it. I only knew that Julia was a famous chef, the previews looked cute, and the price of admission couldn’t be beat. I only had two tickets, so I offered one to Kris. TJ didn’t mind. He was out of town. Specifically, he was in Washington, D.C., where he would be taking the Oral Assessment portion of the Foreign Service Officer Test (FSOT) the following day.

Sitting there, completely enthralled in the life of this charismatic woman (Julia, not Julie. Can’t stand her.) and her diplomat husband, I knew…I just knew…that TJ would get the job. I told him so that night when we spoke on the phone. He was incredibly nervous, and I’m not sure if my confidence inspired or terrified him. The following day, as I sat distractedly at my desk waiting for the words that would potentially shape our future and morning crawled into late after at a torturously slow rate, I began to realize that no news was good news. And it was. I can’t recall if I found out via hurried text message that said “I made it! Can’t talk now,” or a frantic phone call that said much the same, but July 22, 2009 changed our lives forever and for the better. Paul and Julia Child even gave me a sneak preview the day before.

At the time I saw it merely as a “TJ has Paul’s job, and we all get to travel the world.” Now, looking back, I realize how much like Julia Child I felt, and still feel. She left her job and followed her husband to parts unknown. Whether it was a satisfying career that she left behind, I don’t know. Mine surely wasn’t. But it was job security. It was comfort in knowing that I could support myself. In the two and a half years that have passed since we left Orlando, I have thankfully maintained employment for all but about three months during the transition between D.C. and Guadalajara. October 19th will be my last day of work. Due to language training in D.C., I do not expect to work again until sometime after August 2014. Sure, I’ll be busy with my studies, but not contributing to my household income for such an extended period will surely leave me feeling...”less than.” And our bank account will certainly lack a little something as well.

With that in mind, I do have projects. I’ve been gathering recipes here in Mexico. I hope to one day put them into a book. I’ve also discussed doing the same in Jerusalem with a friend whose husband will be serving simultaneously with TJ.

Don’t worry; I’m not going to have a Julie Powell breakdown and try to make my riches off of far greater minds than mine without their approval or blessing. If this dream happens, I’ll be using recipes learned from and inspired by friends overseas, not writing a diary about how mimicking someone else’s hard work has changed my life.

I wouldn’t even say the idea was inspired by Julie & Julia, the people or the film. I just recognize the importance of food to culture and understand that the ability to replicate food is but one way that we can take that culture with us and share it with others. Also, Mexico has RUINED Tex Mex for us, and I need to ensure that we can have the real deal when desired. Hmm. Perhaps Julia inspired me a bit after all. 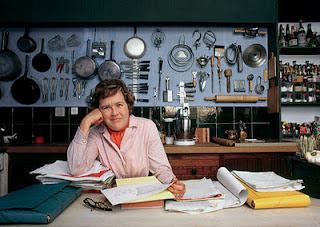 I dream of writing a novel one day, too. People I know in the real world compliment this blog often enough, many (politely and/or sincerely) suggesting that I have writing chops. I certainly have ideas. I’ve just not put pen to paper.

Focusing more on the short term, TJ and I want to adopt, and sooner rather than later. With this in mind, we understand the importance of increasing our earnings to better support our future family. Therefore, I have decided to (try to) do something I’ve not seriously considered until now.

Last night, I began studying for the FSOT.

It’s a big, scary test that leads to a much-coveted career path. Many try, few are selected. Kind of like authorship. It will be interesting to see which goal materializes first.

Three years ago, Julia Child told me that TJ would become a Foreign Service Officer. 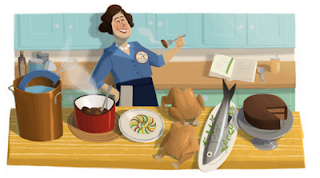 This morning, when I opened Internet Explorer and Google loaded, she reminded me that officers can have successful spouses, too.
Happy Birthday, Julia. And thanks for everything.
Posted by Aaron at 8:11 PM