The Honeymooners, Day One: All Roads Lead To Rome

January 9th marked our first wedding anniversary, and we decided to celebrate in style by taking the honeymoon that had been denied us due to having married on an "Admin Wednesday" in the middle of Arabic training.  For those not in the know, administrative days are a magical time of week in which Foreign Service Officers (and their spouses, should they also be inclined to take classes at the Foreign Service Institute) are allowed to leave at lunchtime under the pretense of studying or taking care of paperwork, travel arrangements, medical appointments, etc…because there is a strict no-vacation policy during language training.

Our two week Mediterranean adventure began in Rome, which has been on my to-do list ever since a college study abroad trip found me traveling through Italy on my way from Nice to Munich during a year so long ago that the Italian lira had not yet been discarded in favor of the euro.  Our group stopped for a potty break at an Italian gas station in the middle of nowhere and I almost fainted when I saw that a pack of gum cost 1400 ITL.  Recovering, I did some quick math and realized that this was only about 0.75 USD.  I then got back on the bus and continued my journey.  That was it.  No sightseeing.  No lunch.  I didn't even buy the gum!

Our journey began in the wee hours of the morning on Saturday, January 4th.  With a flight scheduled to depart from Tel Aviv's Ben Gurion airport at 5:50AM, it was important for us to depart our Jerusalem abode no later than 2:30AM to ensure we arrived in plenty of time to complete the always-lenghty international check-in process.  We called and reserved a cab in advance, yet 2:30 rolled around and there was no cab waiting outside.  Five minutes later, two cabs pulled up in front of us.  When asked if either was from the company that we had made our reservation through, both drivers answered in the affirmative.  I brief discussion was held in hushed, rapid Arabic between the two drivers before one sped off and the other triumphantly tossed our luggage into the trunk of his car.  Three city blocks later, after receiving a price fifty shekels higher than we had been quoted over the phone, we found ourselves parked, patiently listening to a telephone conversation between the driver and an unknown entity.  Seconds later we were standing on the street watching, perplexed, as our luggage was loaded into the back of a third cab, presumably belonging to our person on the other end of that phone exchange.  The price remained the same (fifty higher than the quote), but we were on our way.  We arrived at the airport in plenty of time to check in and eat a hamburger because, dammit, we were on vacation and we could eat hamburgers at 4:45 in morning if we wanted to. 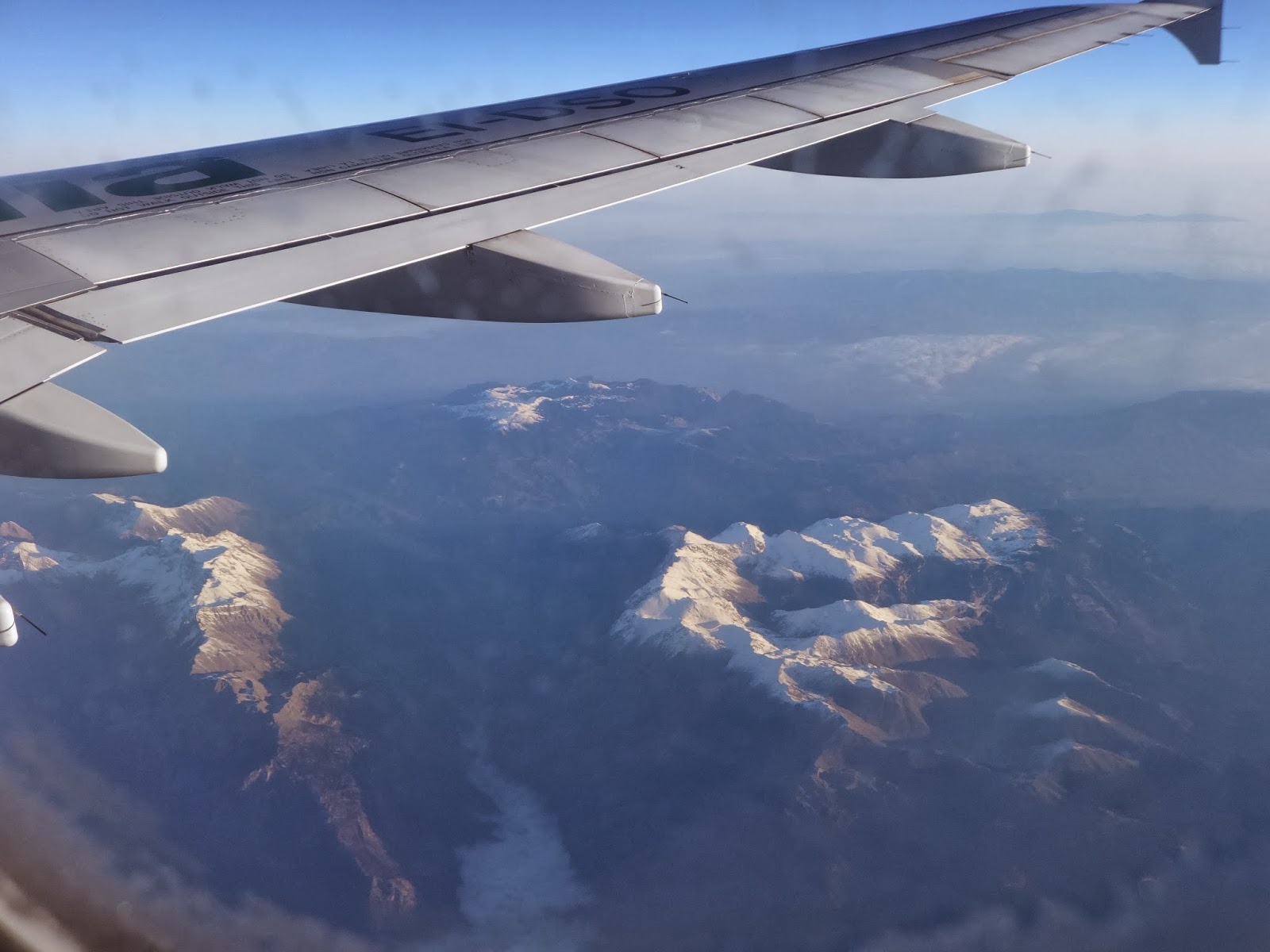 We touched down at Rome's Fiumicino Airport shortly before 9AM (please see obligatory wing photo, left) and made quick work of purchasing fare to Roma Termini, the city's central train station.  We boarded the train right before it departed and spent the next 35 minutes in total fear as we had, in our haste to board, neglected to validate our tickets on the platform.  Correction:  We spent 10 minutes arguing over the merits of a validate-before-departure system if someone is going to come around and re-validate them anyway, and then the remaining 25 minutes worrying about said secondary validation.  We had nothing to worry about; I guess the attendants don't like busting heads before their morning coffee.

A "quick" 30 minute stroll later and we found ourselves in the lobby of the Hotel Cosmopolita, where our Expedia rewards had snagged us a nifty upgrade.  Our room wouldn't be ready until 1PM but we were allowed to leave our luggage in the broom closet and use the public restroom to freshen up a bit.

Our first stop (not counting the super cool three-story toy store that I made a reluctant TJ peruse...) was 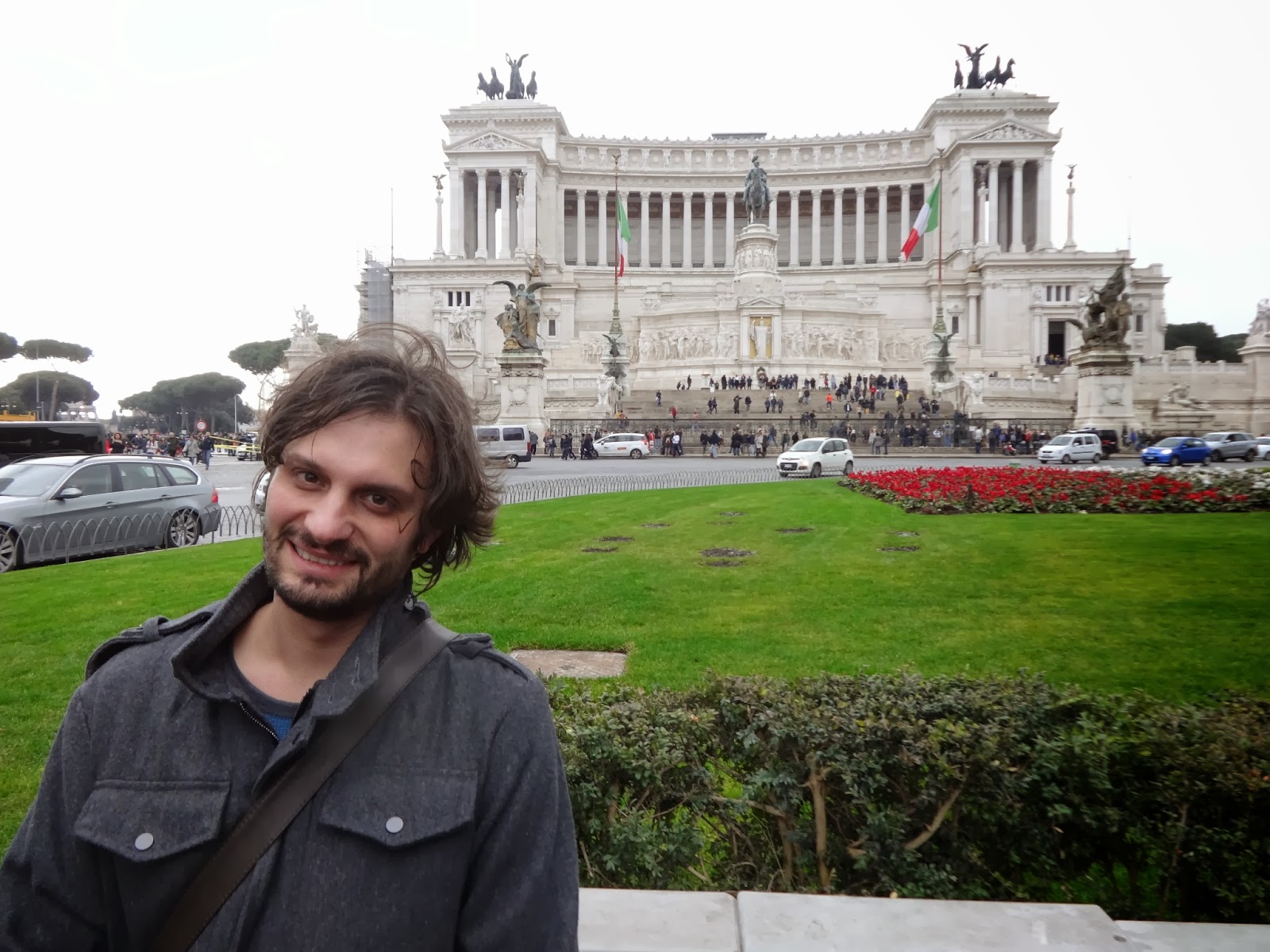 the Altare della Patria (Altar of the Fatherland), located around the corner from our hotel in Piazza Venezia.  Also known as the Monumento Nazionale a Vittorio Emanuele II (National Monument to Victor Emmanuel II), this particular site wasn't necessarily on our to-do list, but it was nearby and pretty, so what the hey?  The monument, built to honor Victor Emmanuel II, the first king of a unified Italy, stirred up quite a controversy during its construction due to the fact that a significant portion of the Capitoline Hill's northern slope had to be destroyed to make way for it.  In its heyday, The Capitoline Hill was simultaneously the smallest and most important of ancient Rome's seven hills.  It contained the citadel of the earliest Romans and acted as the political and religious heart of Rome.

The monument is perhaps most well known as the home of the Tomb of the Unknown Soldier.  The tomb contains the body of one unidentified soldier, chosen at random on October 26, 1921 by a woman who had lost her only child in World War I.   His body was never recovered.  The tomb is located below this statue of Dea Roma, a deity who personified the city of Rome and the entirety of the Roman state.

The monument also houses the museum of Italian Unification, though we didn't stop long enough to go in. We were off to the forums!  Or fora, if you wish to be fancy.

First up were the Imperial Fora (okay, so I wish to be fancy), a series of public squares constructed over a period of one and a half centuries (46BC-113AD).  They were the center of the Roman Republic and of the Roman Empire. 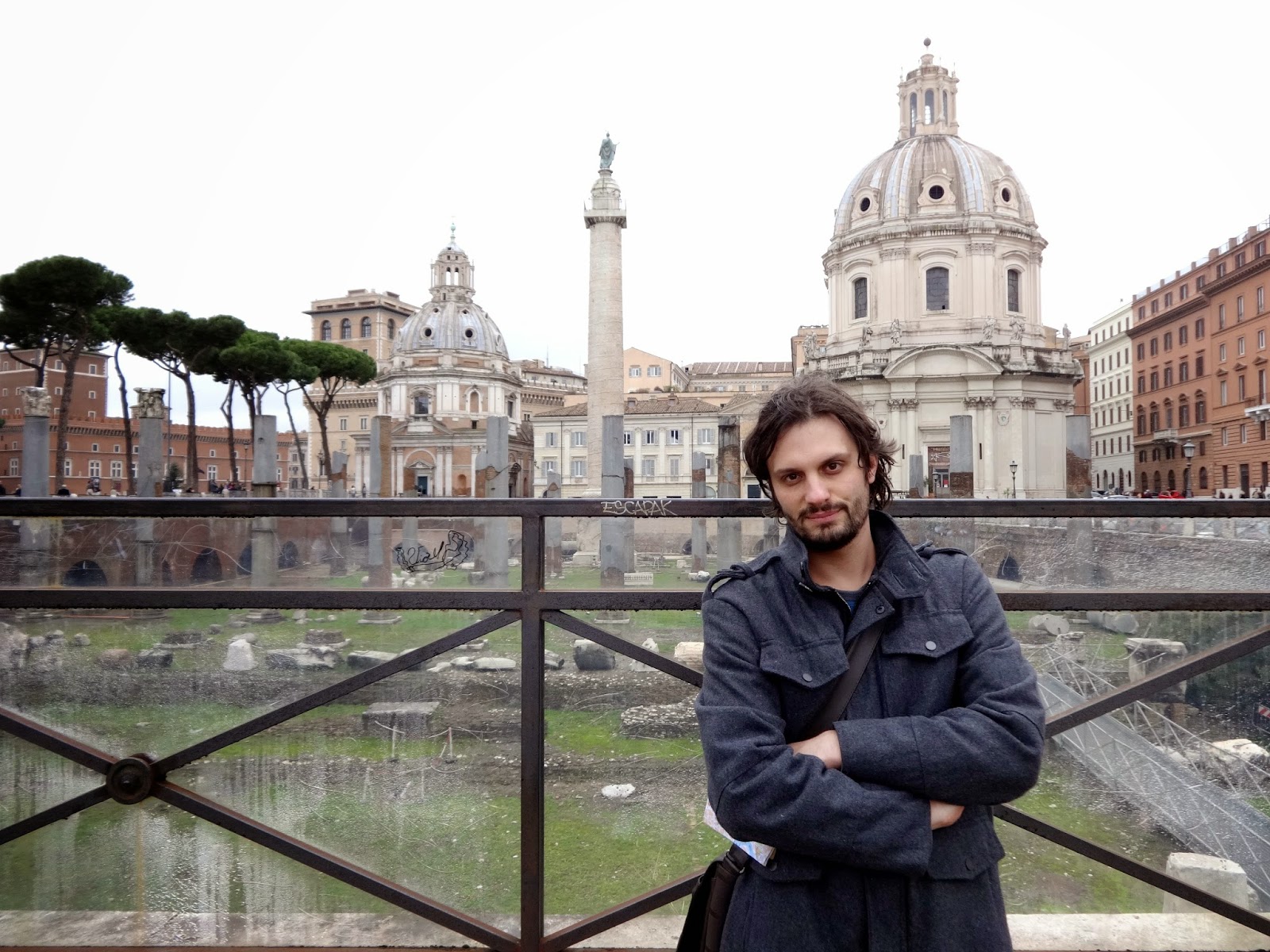 As we are apt to do, we started where we should have ended, at Trajan's Forum, the last of the Imperial forums to be built.  Constructed on the order of emperor Trajan using the spoils from the conquest of Dacia (modern day Romania and Moldova), the forum itself was inaugurated in 112, with the inauguration of Trajan's Column following a year later.  A continuous relief wraps around the column illustrating Trajan's two victorious military campaigns against the Dacians.  This is the backside of the column.  We somehow never made our way around to the front.  Oh well.  Guess we will have to go back some day.  Construction of the forum required, in what appears to be a recurring theme, the destruction of parts of the Capitoline and Quirinal Hills. 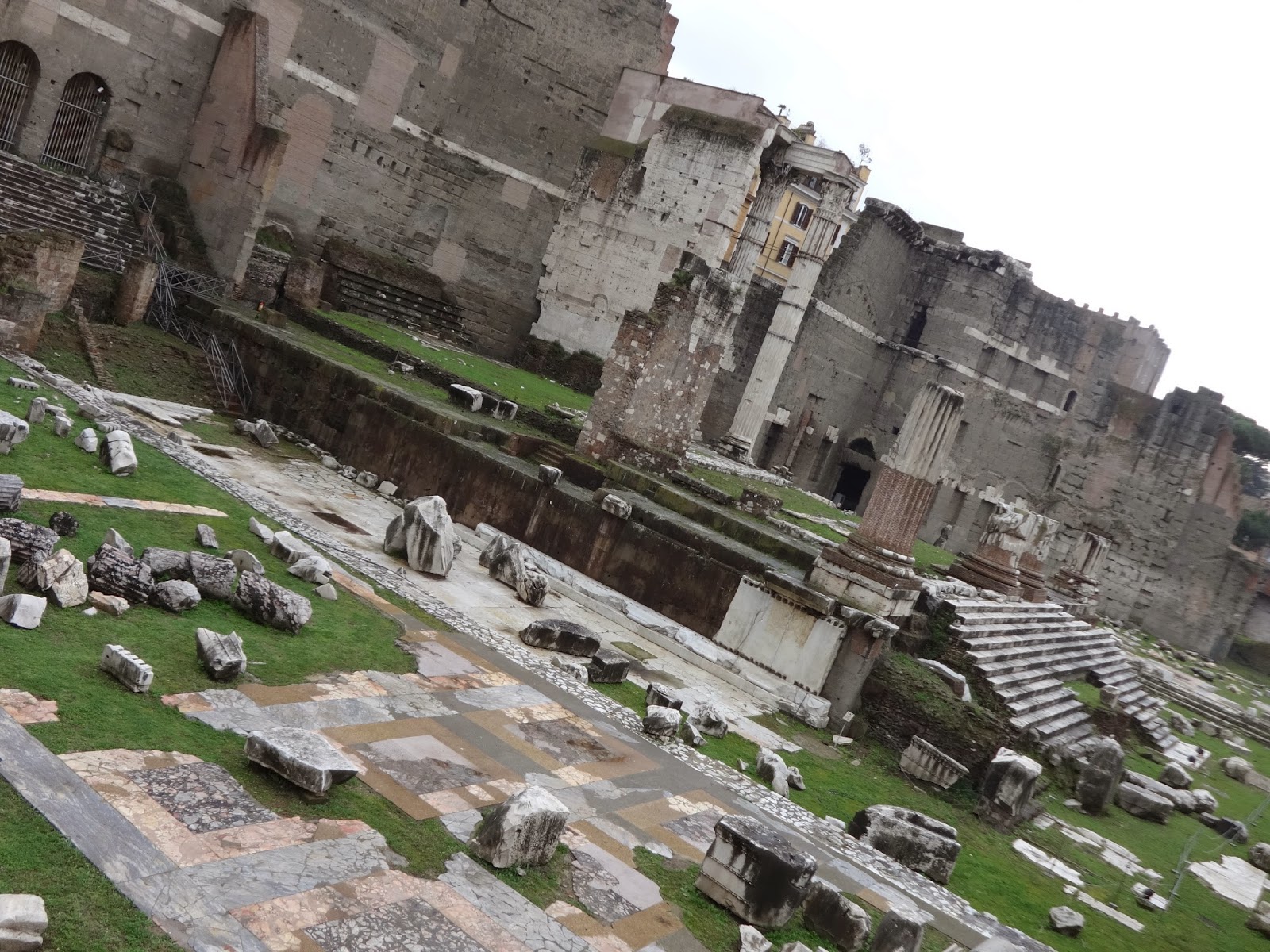 Next up was the Forum of Augustus.  The forum, was inaugurated in 2 BC following 40 years of construction.  The triumvir Octavian vowed to build a temple honoring Mars, God of War, during the battle of Philippi in 42 BC.  Octavian, with the help of Mark Antony and Lepidus, won the battle and avenged the political assassination of his adoptive father Julius Caesar.  When Octavian became the first emperor of Rome in 27 BC, the young ruler, now known as Augustus planned for the temple to be built in a new forum named in his own honor.  Once built, the Temple occupied the center of the eastern side of the Forum of Augustus, though it was completely destroyed sometime between 494 and 526 AD.

And that leads us to the last (and what should have been our first) of the Imperial Fora:  The Forum of Caesar was built as an extension of the Roman Forum (which was to be our next stop, so maybe  we did this in the right order after all?).  The forum was inaugurated in 46 BC, though it was likely incomplete and later finished by Augustus.  The forum acted as a celebration of Caesar's power and also as a replacement venue to the Roman Forum for public affairs and government.

Located just beyond the Forum of Caesar was the Roman Forum itself, a rectangular plaza surrounded by the ruins of numerous ancient and important government buildings.  The form was the city center from which ancient Rome developed. If there was a parade, an election, a public speech, a trial, or a gladiatorial match to be found, it was very likely found here.  And since I feel that I've already been, and will continue to be, very verbose in this post, I'll (mostly shut up) for a moment, and you can just look at  some photos. 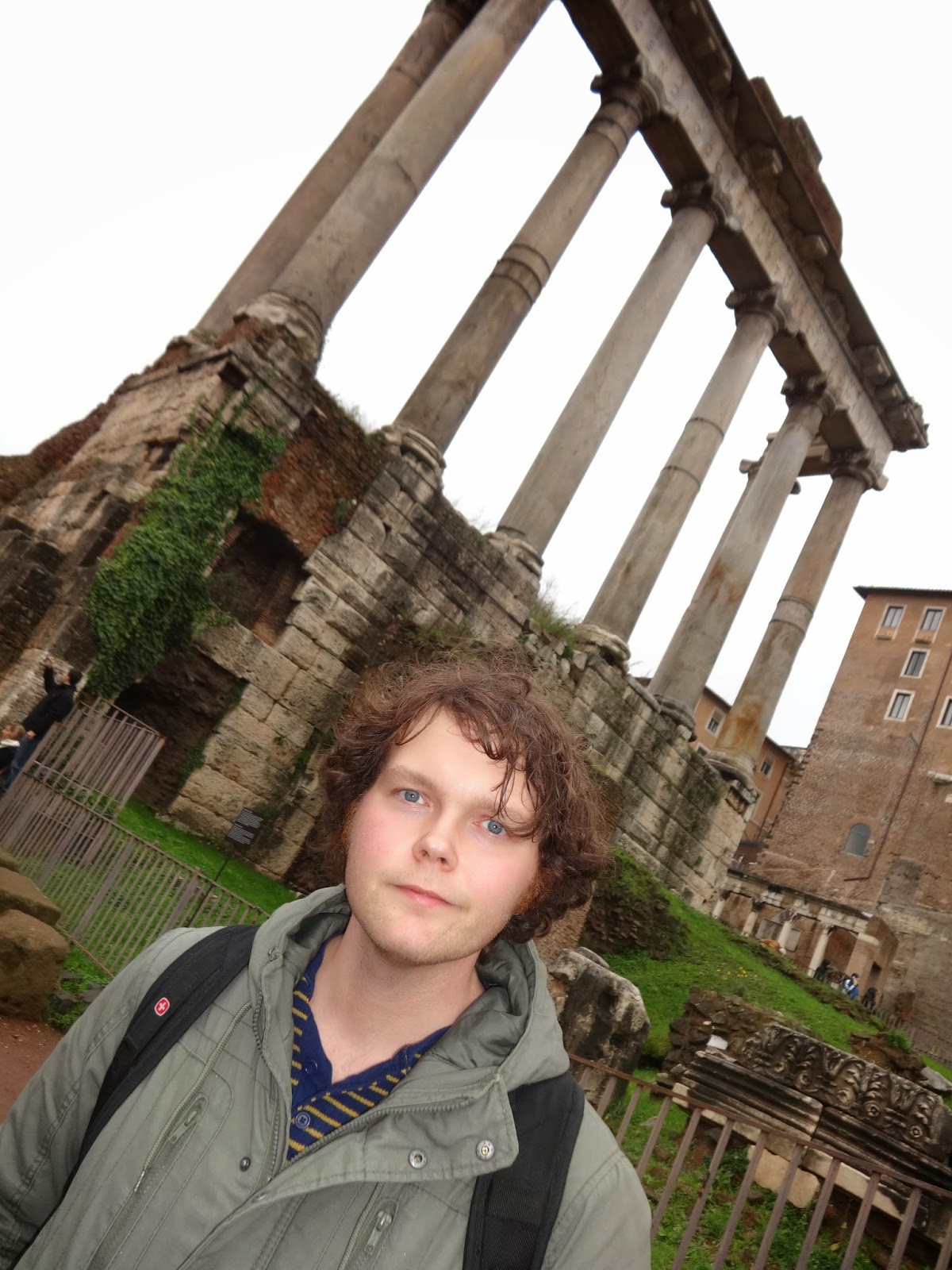 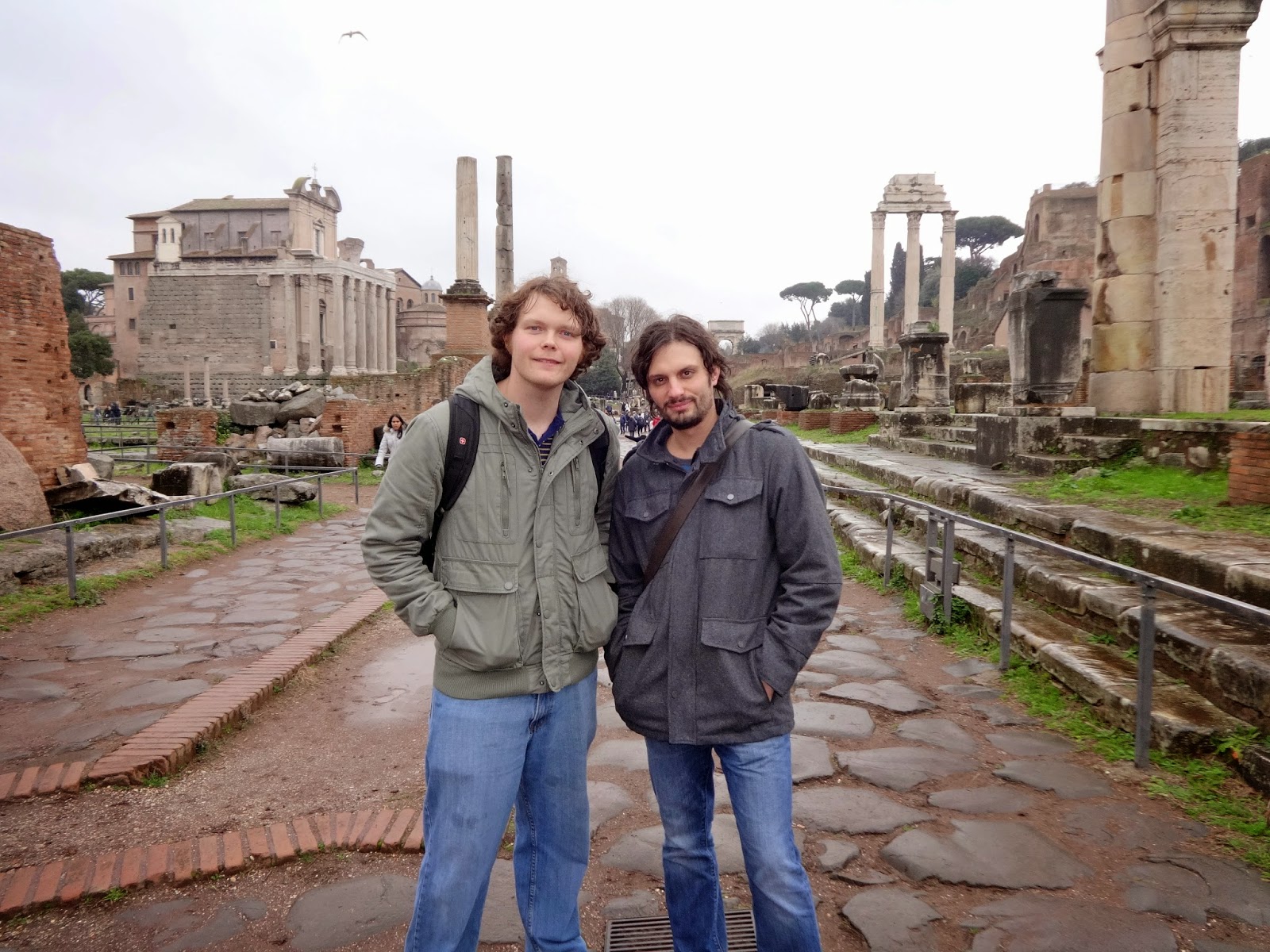 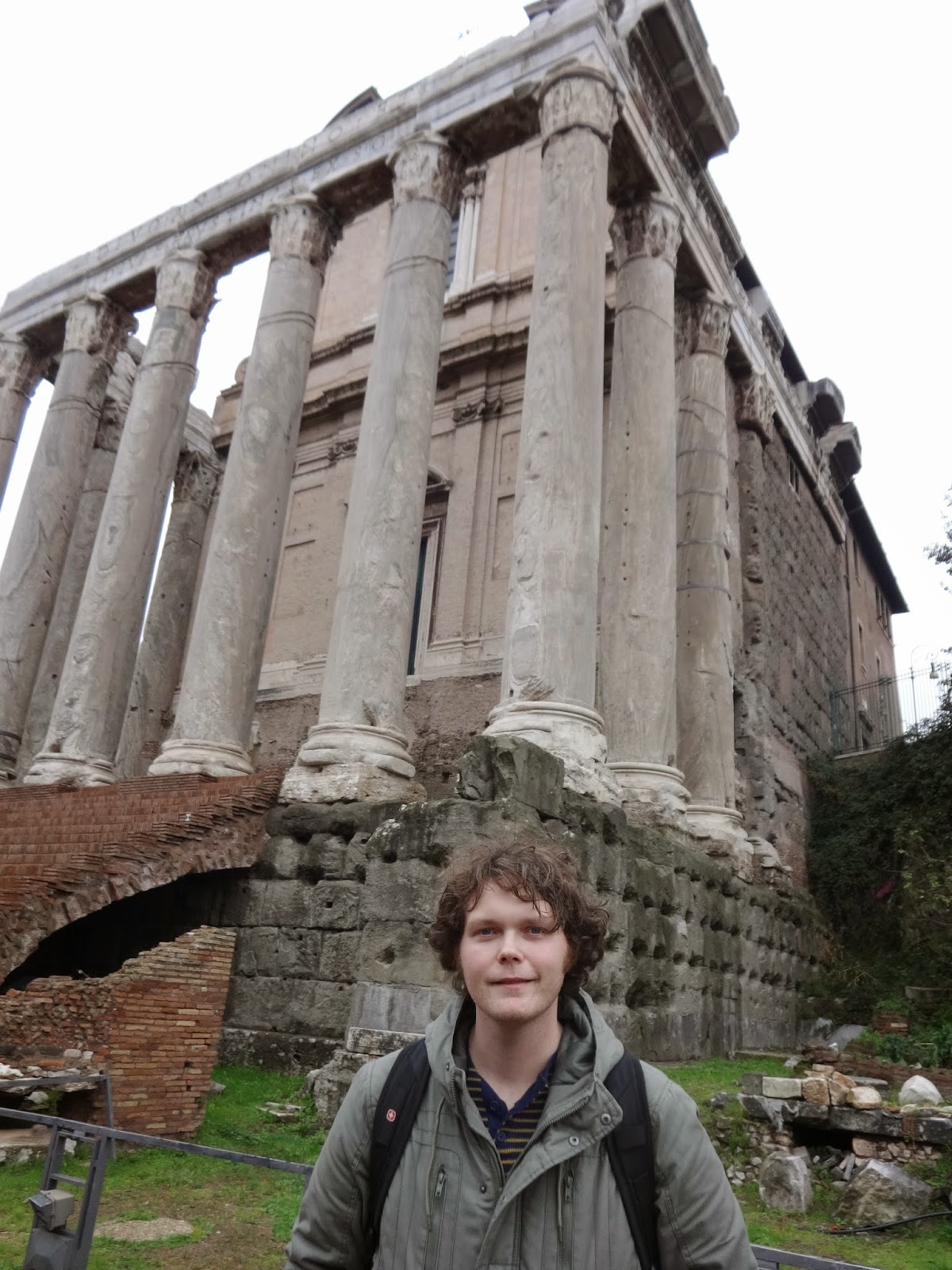 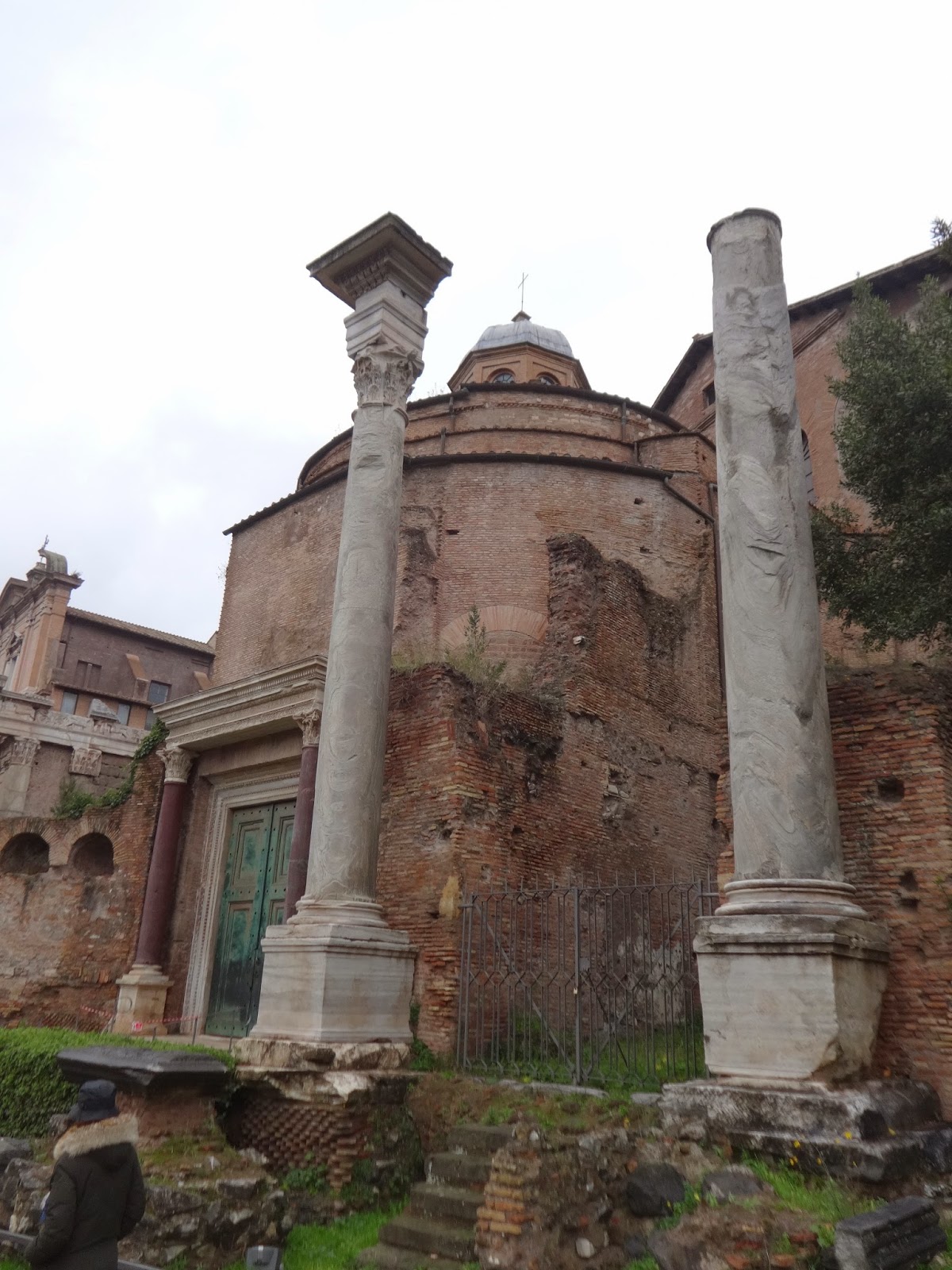 This monstrosity is the Arch of Titus.   The inscription records the dedication of this arch by the Senate and people of Rome to the emperor after his victory over Judea (70 AD). 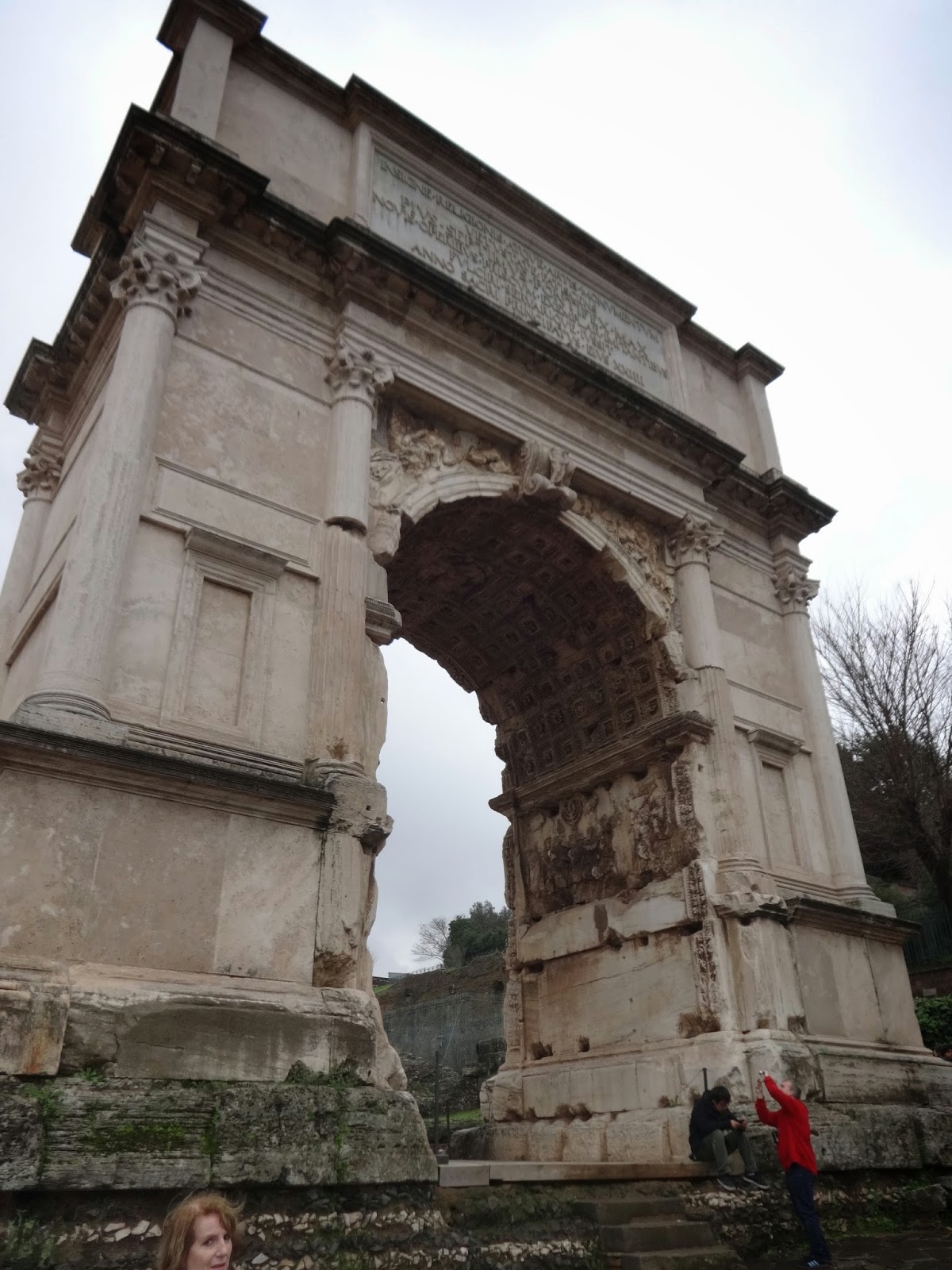 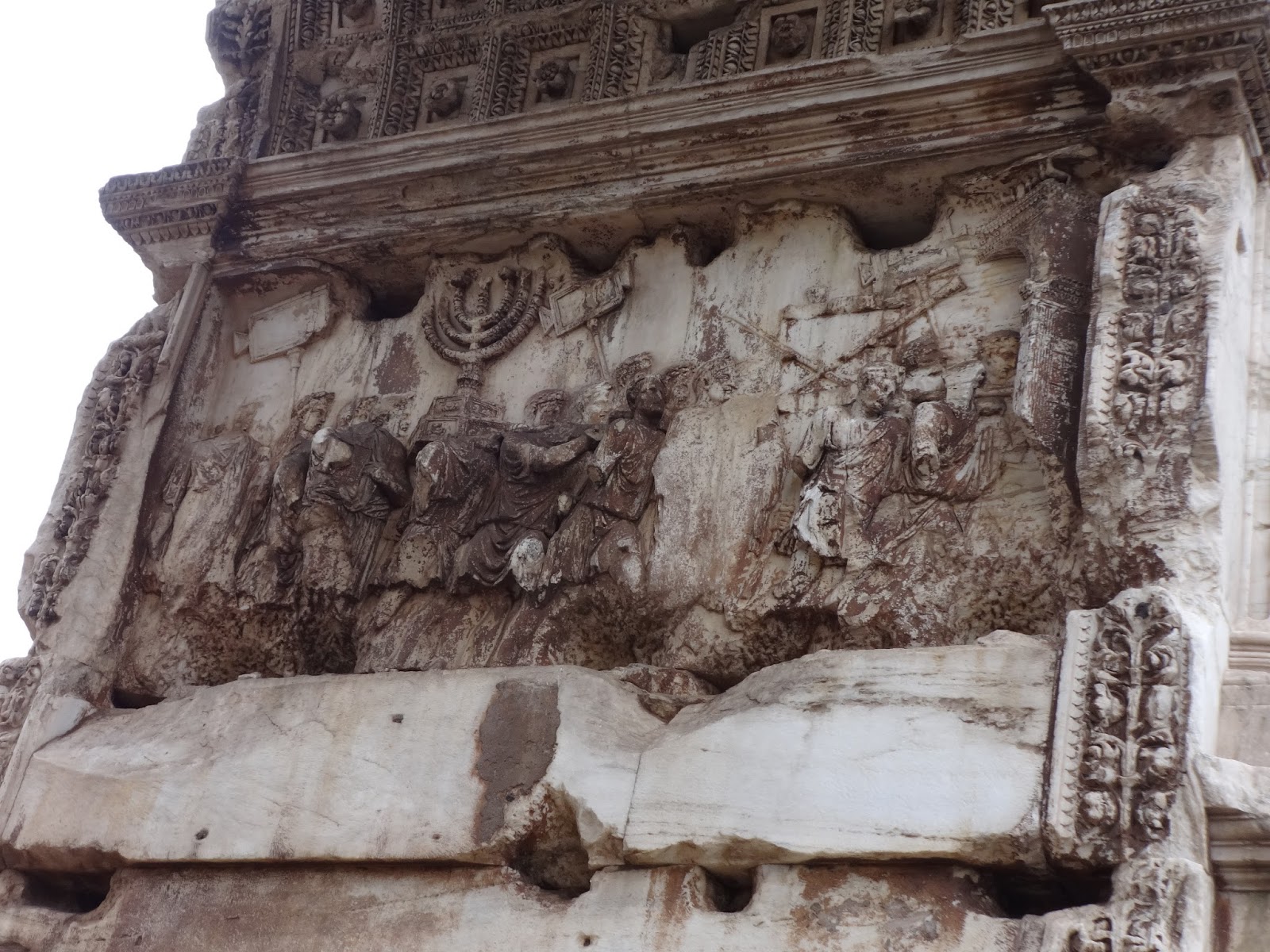 Scenes from the conquest are sculpted on the inside:  one panel shows the procession with the booty taken from Jerusalem, including the menorah; on the other is Titus on his chariot, followed by Victory and personifications of the people and the Senate. 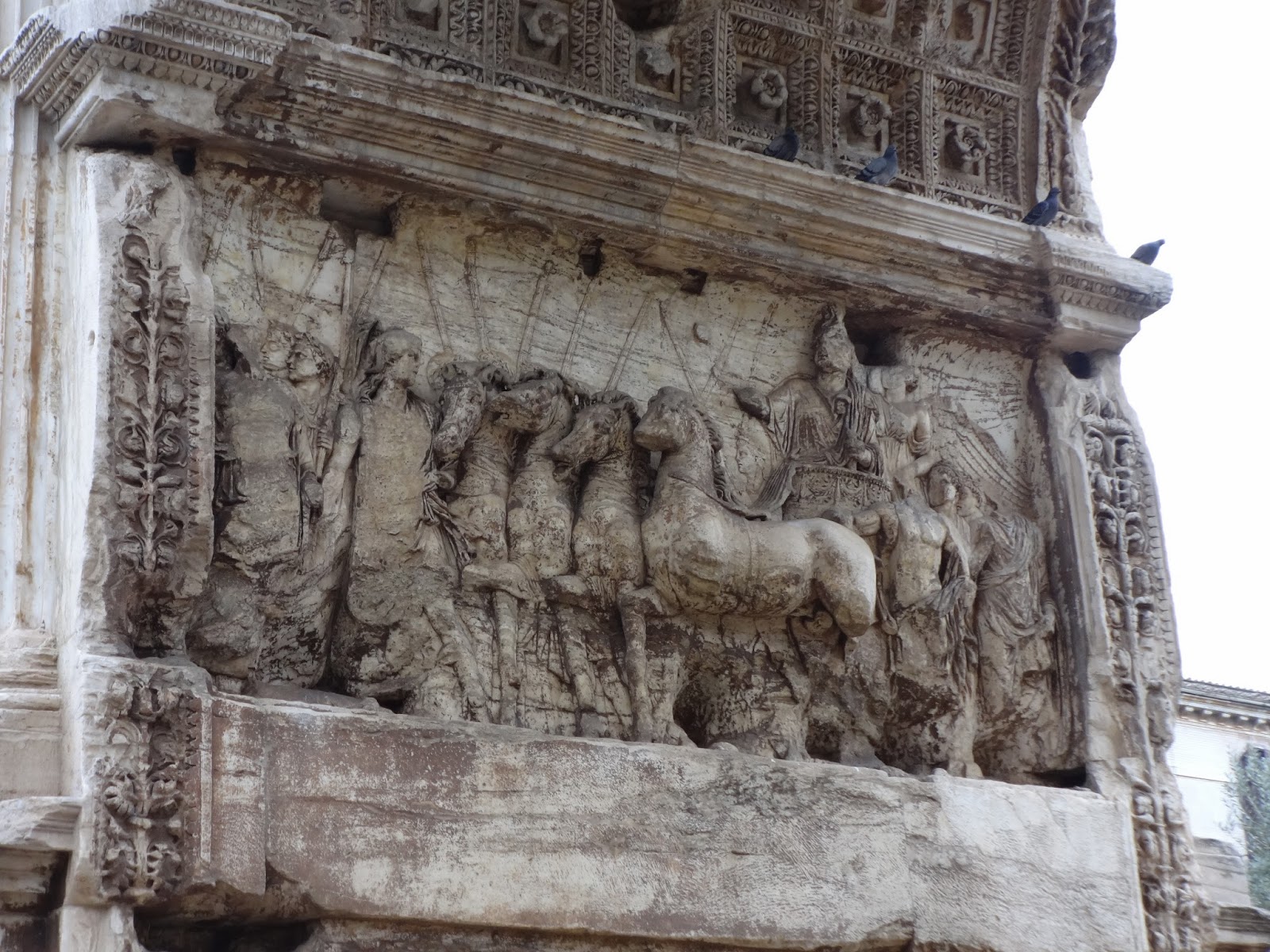 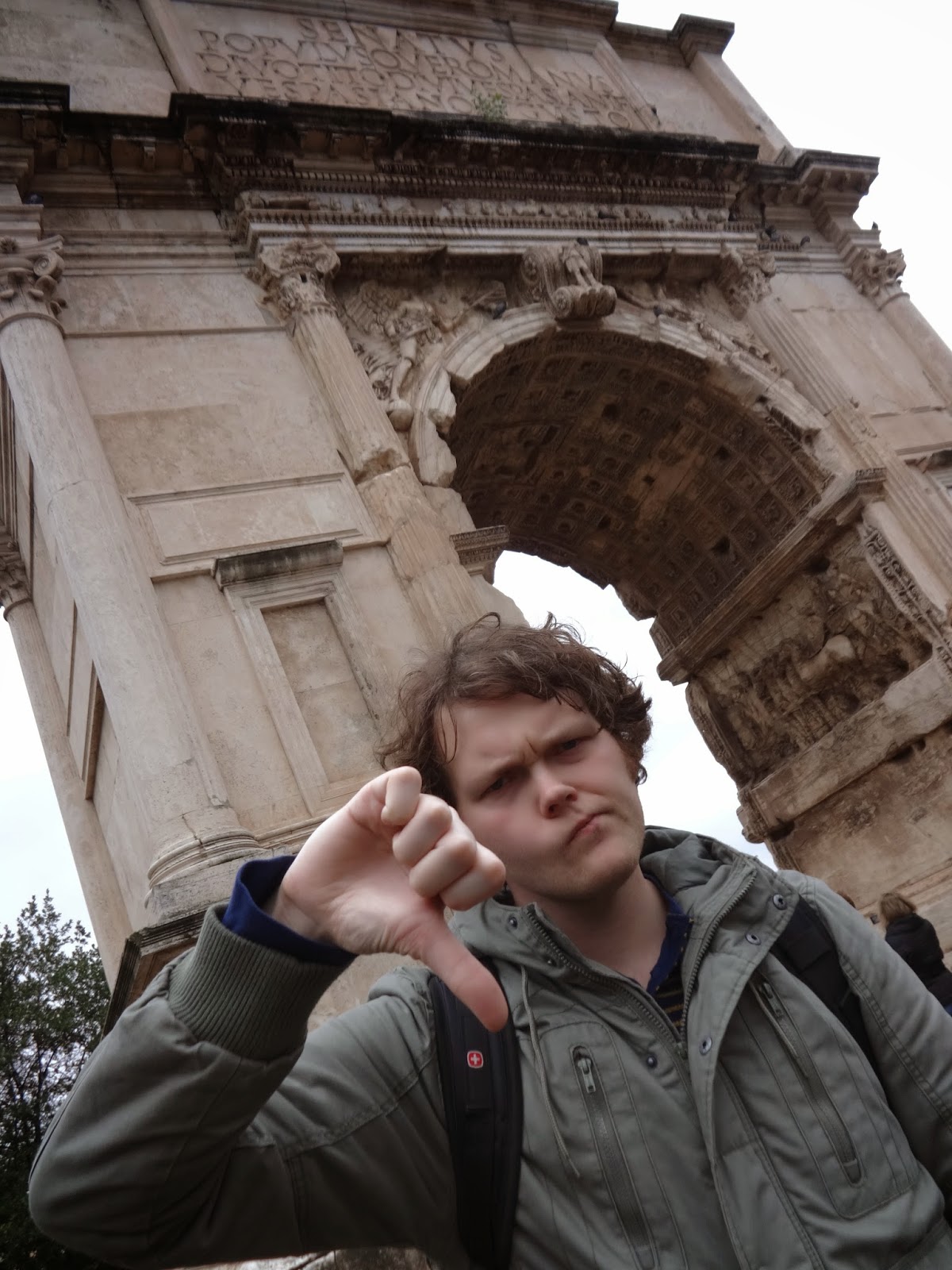 On the outside is the procession of the defeated Jews.  Kind of a chilling sight, having just left Israel that very morning.

Moving further into the Forum, we reached the Paletine Hill, standing 40 meters above the ruins we had spent the afternoon exploring.  The Paletine is the centermost of Rome's Seven Hills and one of the most ancient parts of the city.  According to legend, Romulus founded Rome in 754 BCE on the slopes of the Paletine.

Gorgeous view from the Paletine Hill.  Many thanks to the birdie that modeled for me.
Totally makes the shot.

Next up was the biggie.  The one EVERYONE thinks about when they think about Rome:  The

Colosseum.  In 72 AD Emperor Vespasian used the riches he had gained from his war in Judea to build Rome's first permanent amphitheater to host hunting spectacles and 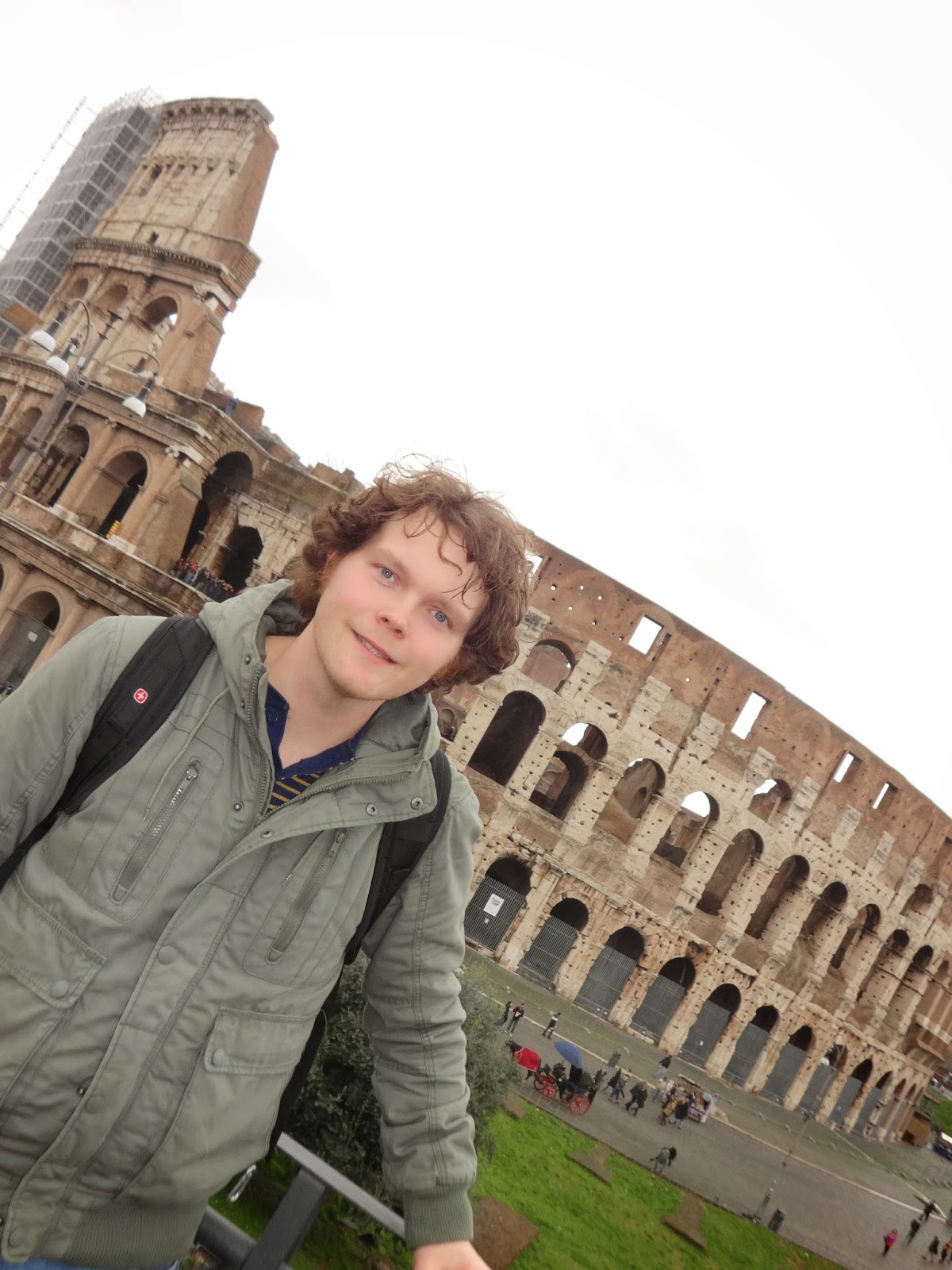 gladiatorial combats.  Built on land that Nero had privatized for the construction of his new palace, the venue was inaugurated in 80 AD by Vespasian's son Titus with 100 days of festivities that were concluded by his successor, Domitian.  The Colosseum operated for approximately five centuries before a devastating fire seriously compromised the structure's stability.  It would be closed for renovations for the next five years.  Gladiatorial combat was abolished in the 5th century, though combat with wild beasts would continue until around 523 AD, when efforts were made to dismantle the building in an effort to harvest it's construction materials…a travesty that haunts much of the ancient world.  What remained of the Colosseum was consecrated by the Church in the 18th century in memory of the Christian martyrs believed to have been killed there, though these rumors are unsubstantiated.

The Colosseum was inscribed into UNESCO's list of World Heritage Sites in 1980.  In 2007, it was proclaimed one of the New Seven Wonders of the World.  That makes two down, five to go! 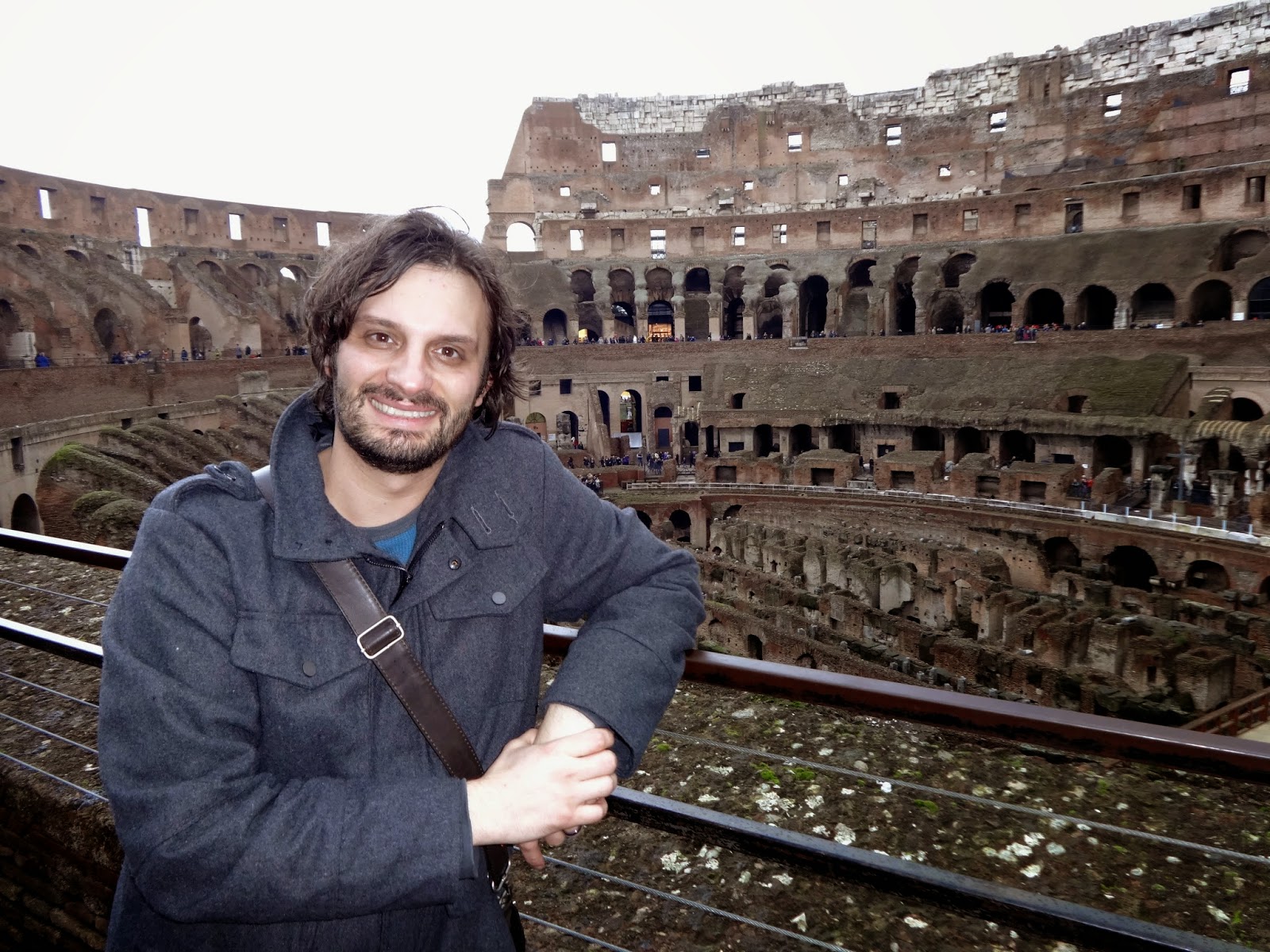 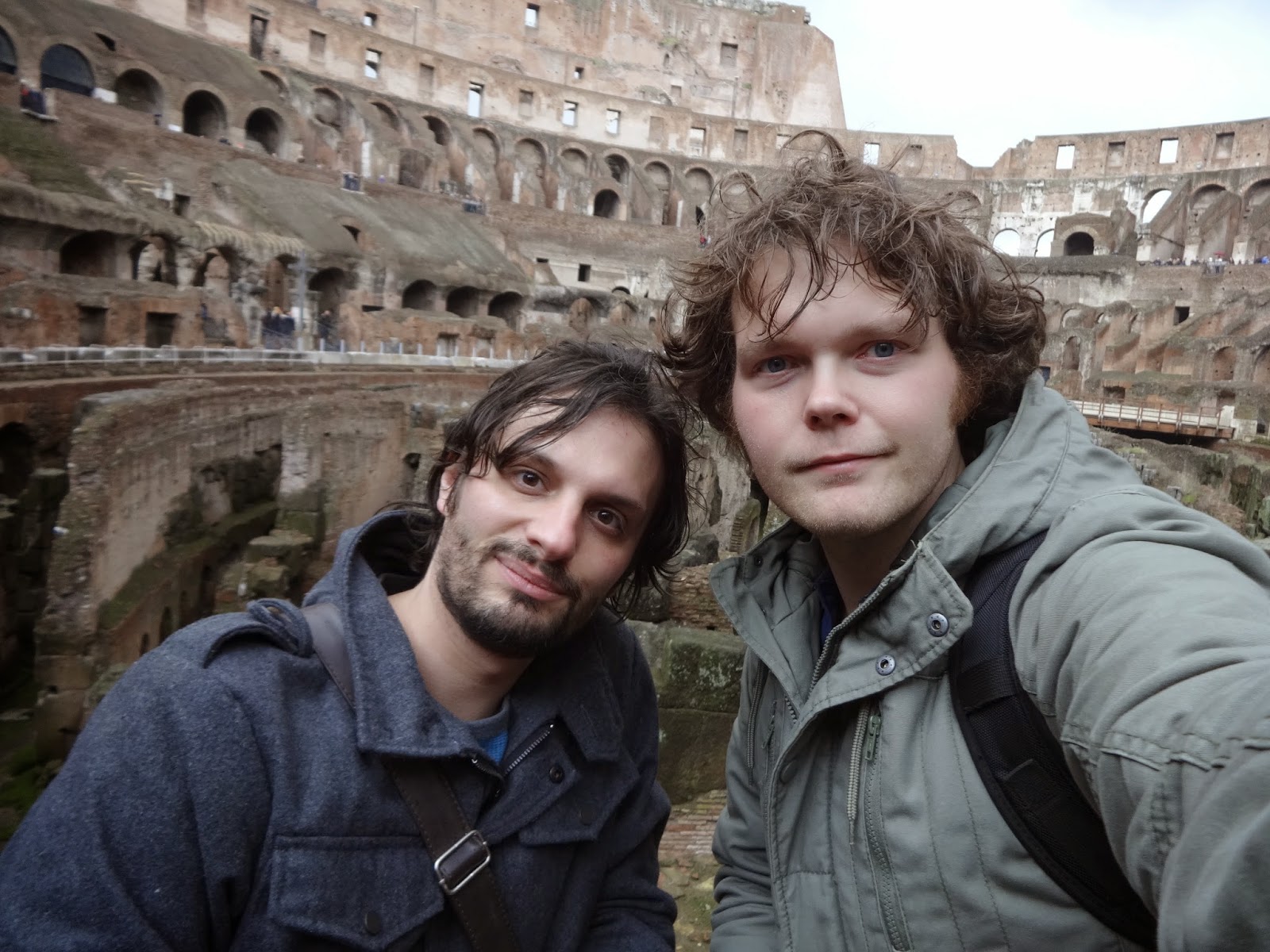 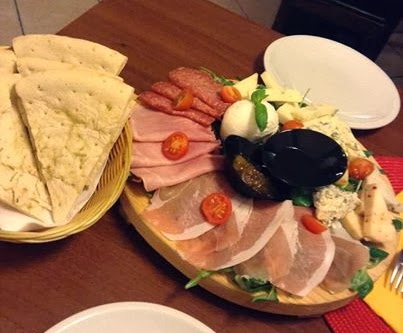 Our final stop of the day was a relaxing dinner filled with antipasti, lasagna, and spaghetti at Gustando Roma, an Italian (shocker!) restaurant located within short walking distance of the Colosseum.   It was a total tourist trap complete with a tacky painting of Russell Crowe decked out in his Gladiator attire adorning the walls.  That does not, however, change the fact that the food was delicious.

Finally returning to the hotel, we found our luggage safe and sound, sitting right where we had left it.  The attendant rolled our bags over to us and made to walk away when suddenly TJ reached into his pocket and the attendant whipped around with a hungry look in his eyes.  With a flourish, TJ handed over a twenty and said "Thanks!"  The hotel employee thanked us and scurried off as if he knew he'd just gotten away with robbing a bank.  What follows is a recreation of the ensuing conversation.