Day two of our honeymoon adventure began with a flash flood and ended with a double rainbow.

Well, actually, day two began with a search for a McDonalds (TJ wanted coffee, and for some reason it just had to be McCafé)…but it did lead to a fun little discovery:  an unusual gathering of ruins just sitting in the middle of a plaza.  Excavations are ongoing but the view is, at least for now, free. 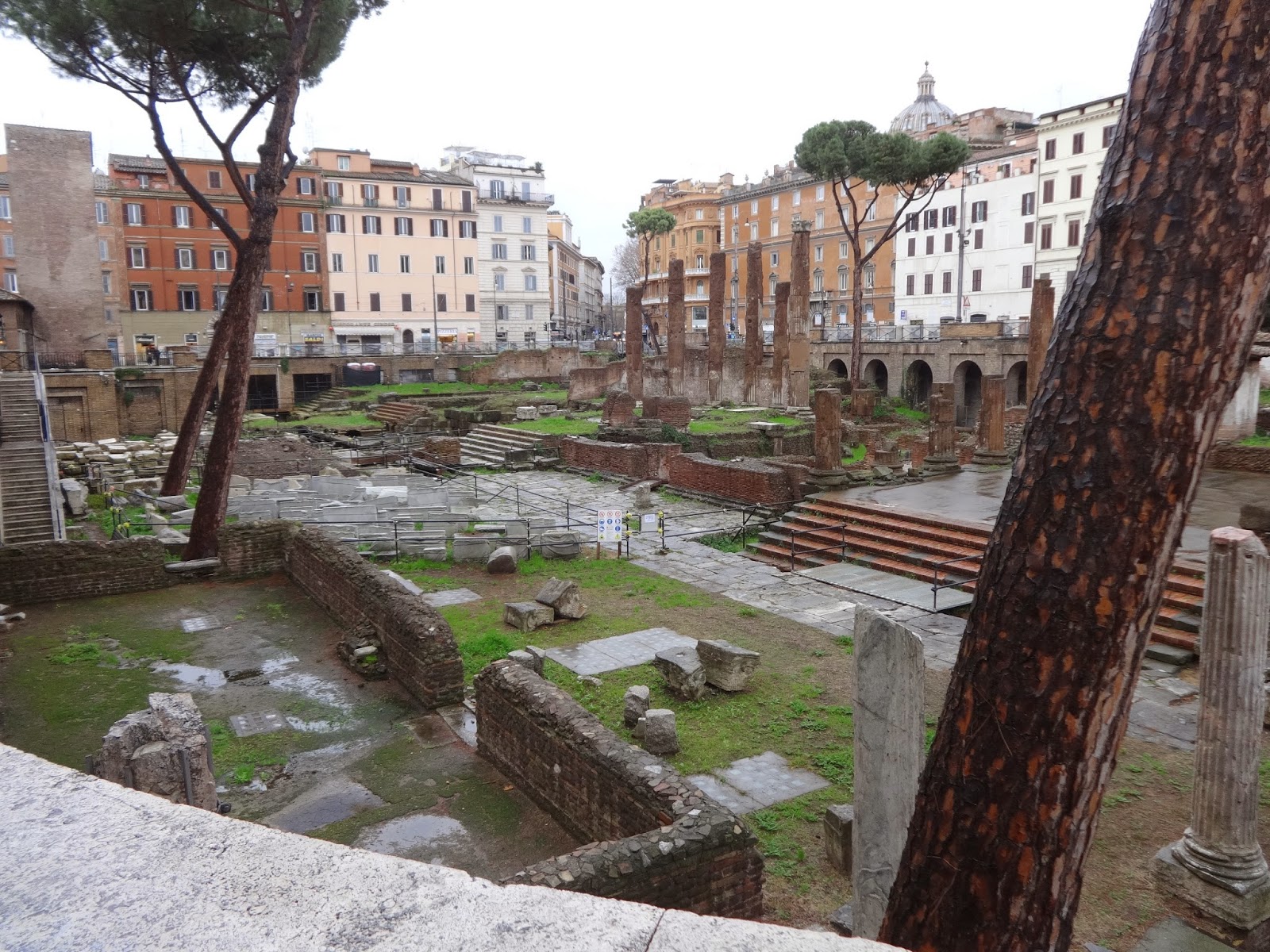 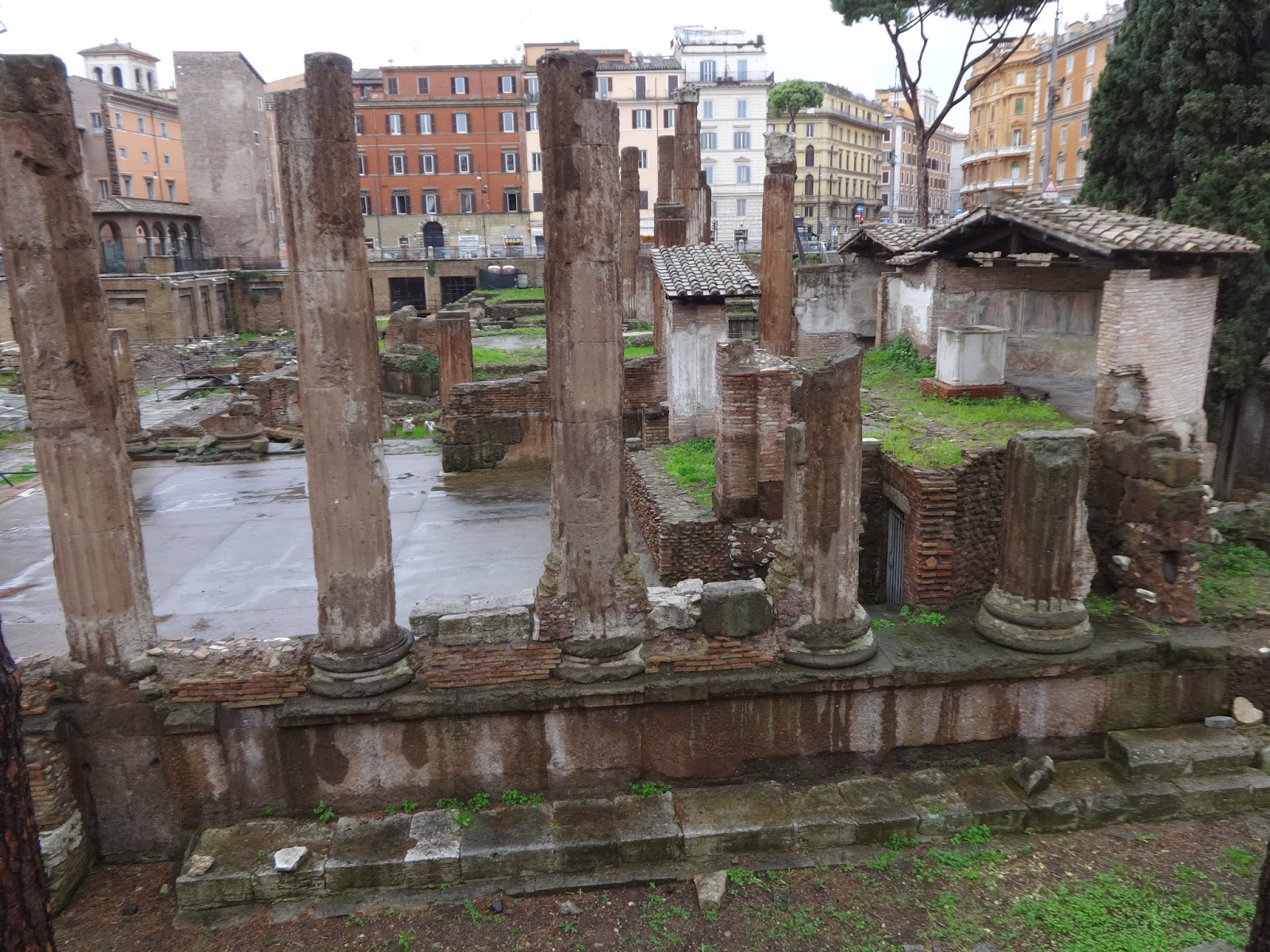 The Sacred Area of Largo Argentina was uncovered during demolition work that had begun in 1926.  Four temples are visible today, facing a paved square.  The temples, identified as the porticoes of Minucia, were used as distribution centers for grain rationed out to the public, making them a primary point of exchange between the Roman government and her citizens.  A brief stop, this particular site would likely have not found its way into this blog post had later research not show that this was the site of Julius Caesar's assassination on March 15th, 44 BC.

Moving along (we shall skip the McDonalds portion of the day, but I assure you it was subpar and, therefore, your typical McDonalds experience), we found ourselves in a bustling plaza ripe with fountains, restaurants, and street vendors. 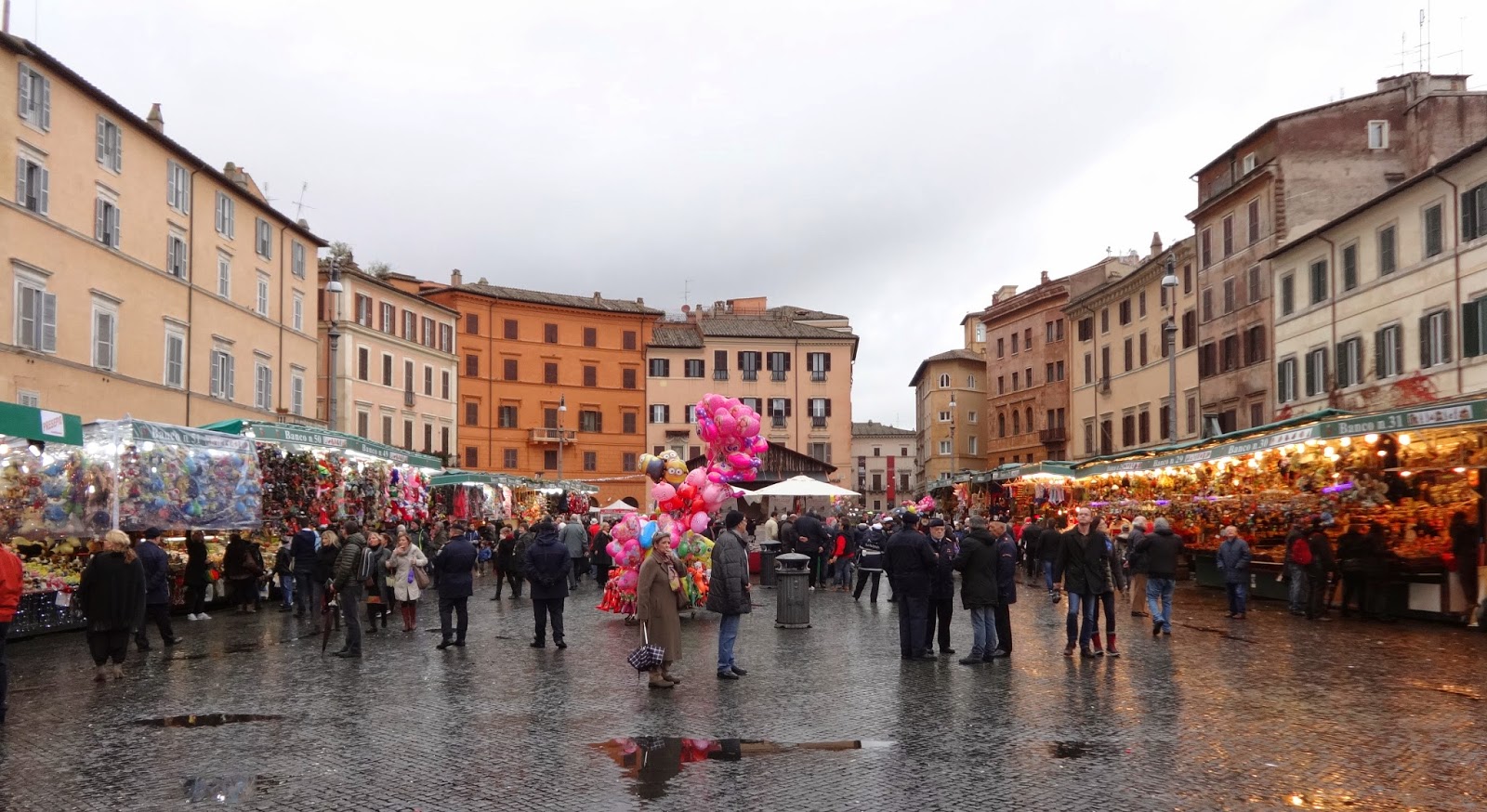 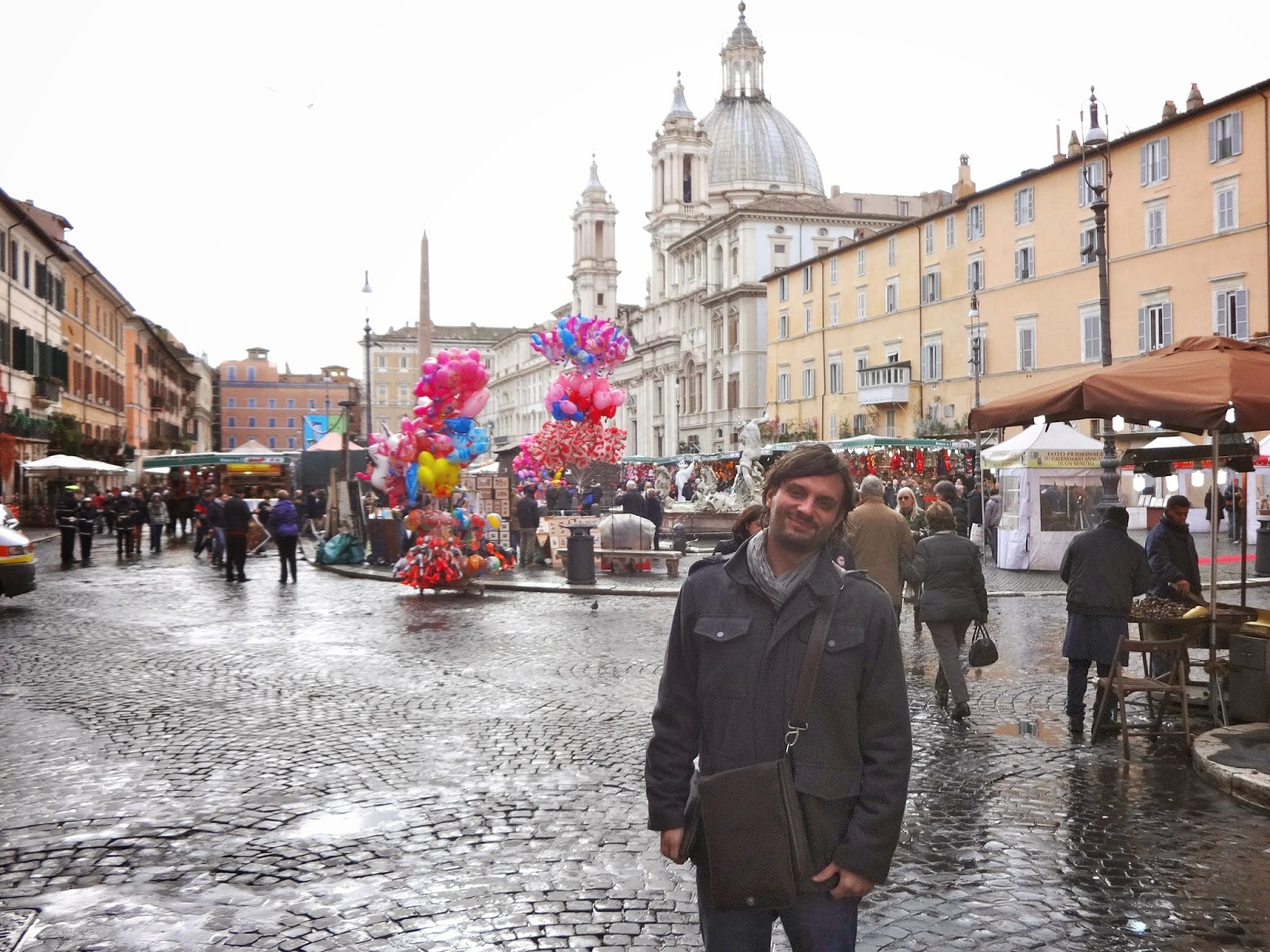 Piazza Navona stands on what was once the Stadium of Domitian, commissioned by Emperor Domitianus around 80 AD as a gift to the people of Rome.  The stadium, which served primarily as a sports venue, was part of a city expansion project that began in the wake of a devastating fire in 79 AD that left much of the surrounding area in ruins.  Today, the buildings surrounding the plaza incorporate the Stadium's original lower arches, and the plaza itself follows the form of the open space of the stadium. 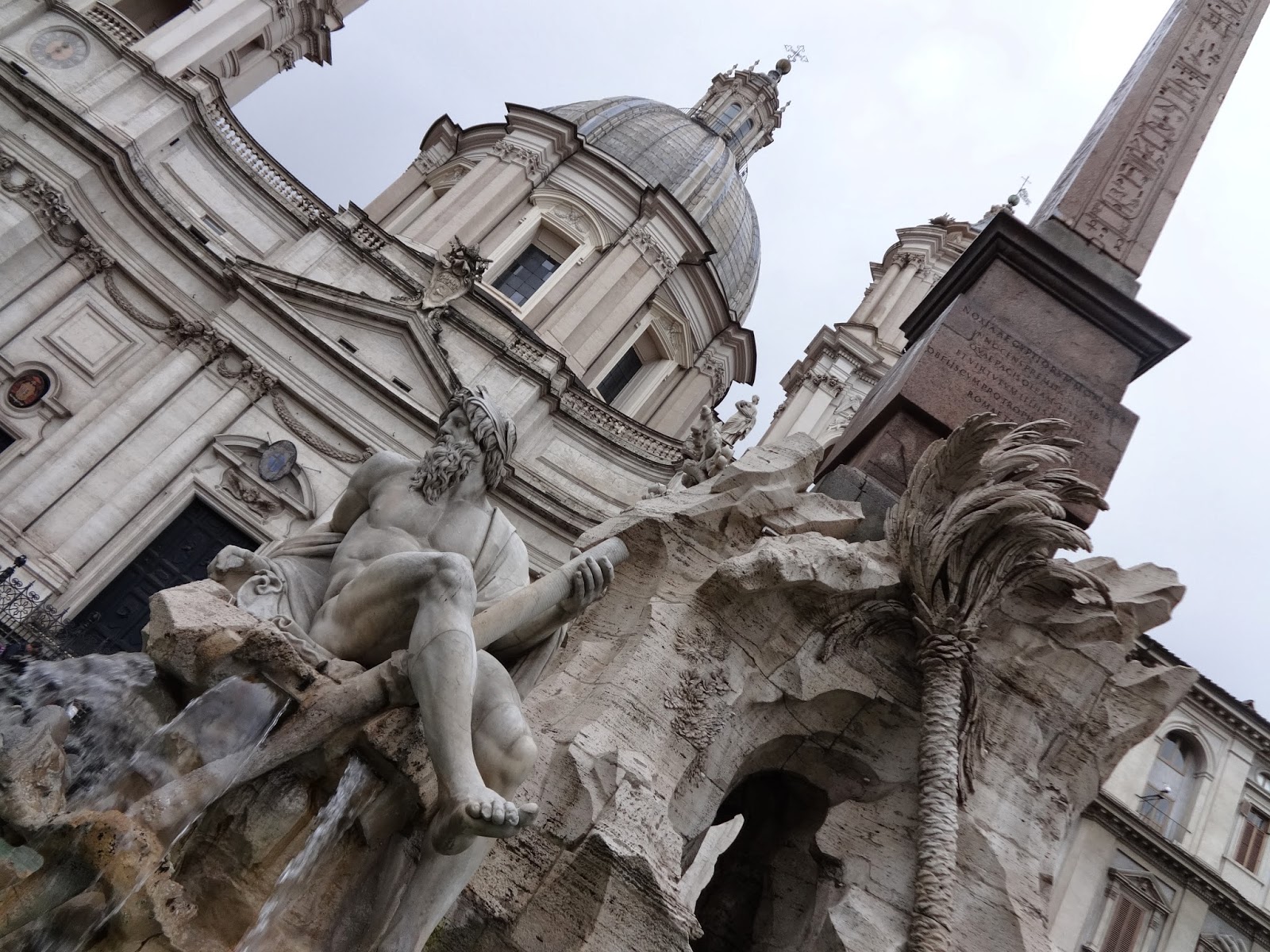 The big draw in Piazza Navona is the Fountain of Four Rivers, designed by famed sculptor Gian Lorenzo Bernini in 1651.  This was but one of several works by Bernini that we would see over the course of our vacation, all of them beautiful beyond words.

The fountain played a critical role in Dan Brown's Angels & Demons, in which it was listed as one of the Altars of Science (Earth, Air, Fire, Water).

An Egyptian obelisk stands dead center.  Many riches were pillaged from Egypt following the war between Octavian and Antony & Cleopatra, and several obelisks litter the modern Roman skyline as a stark reminder of that bloody moment in time.  This particular obelisk was repurposed to include the Pamphili family emblem of a dove holding an olive twig.  The Pamphili family palace faced onto the plaza, as did the church of Sant'Agnese in Agone, of which Pope Innocent X was a member and sponsor, respectively.

Surrounding the obelisk, rocks rise to support river gods that represent major rivers from four continents through which papal authority had spread: 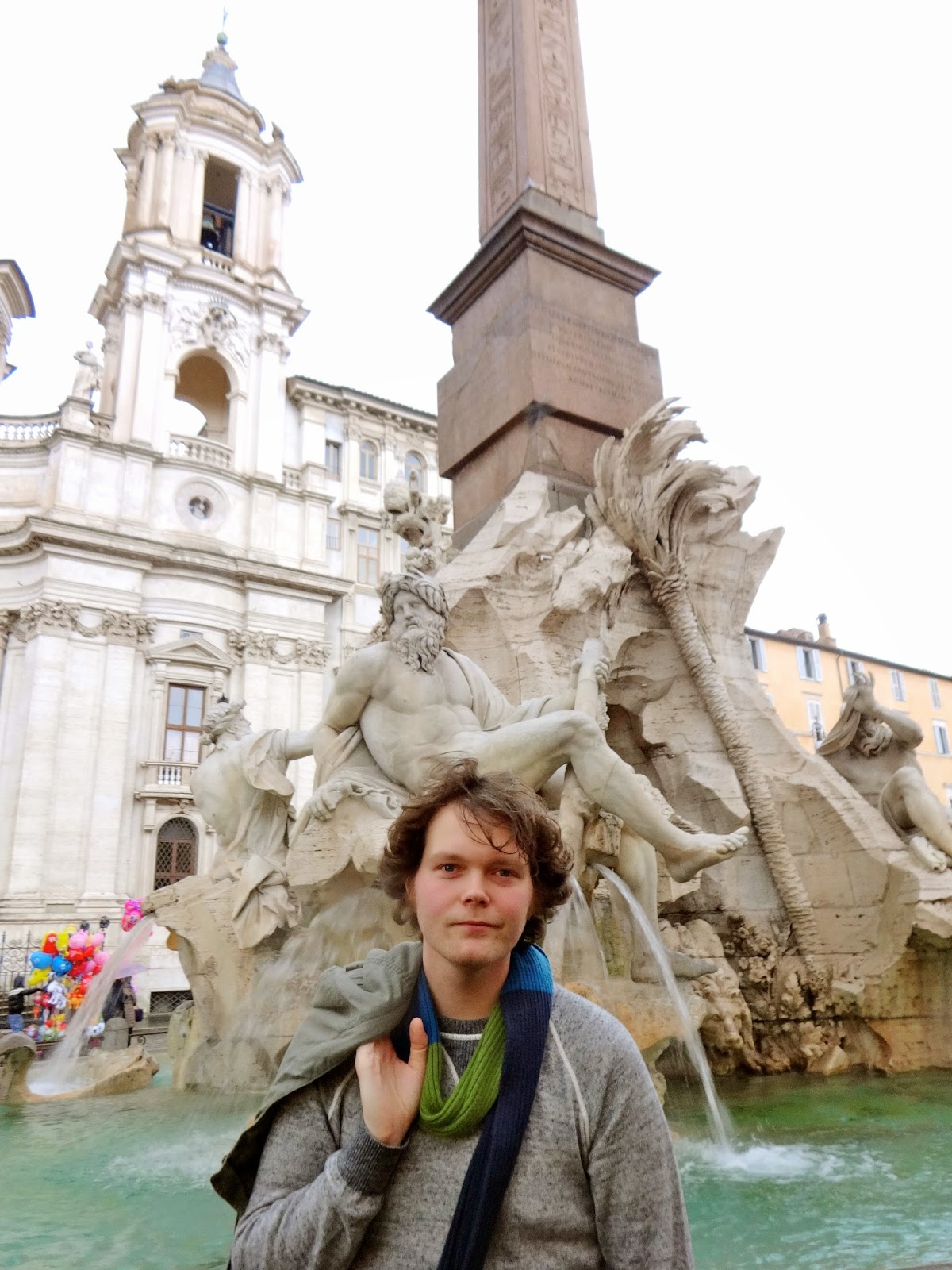 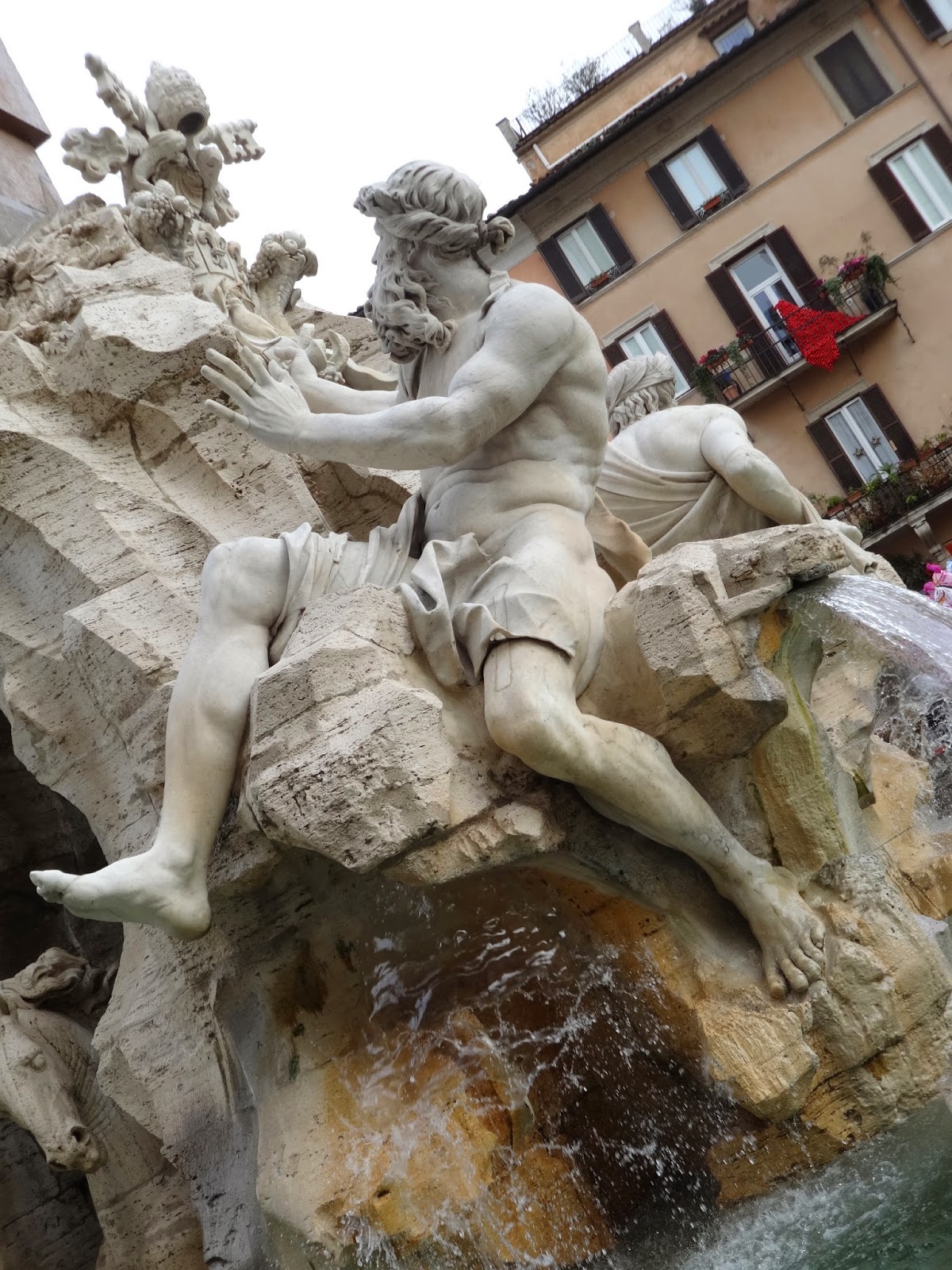 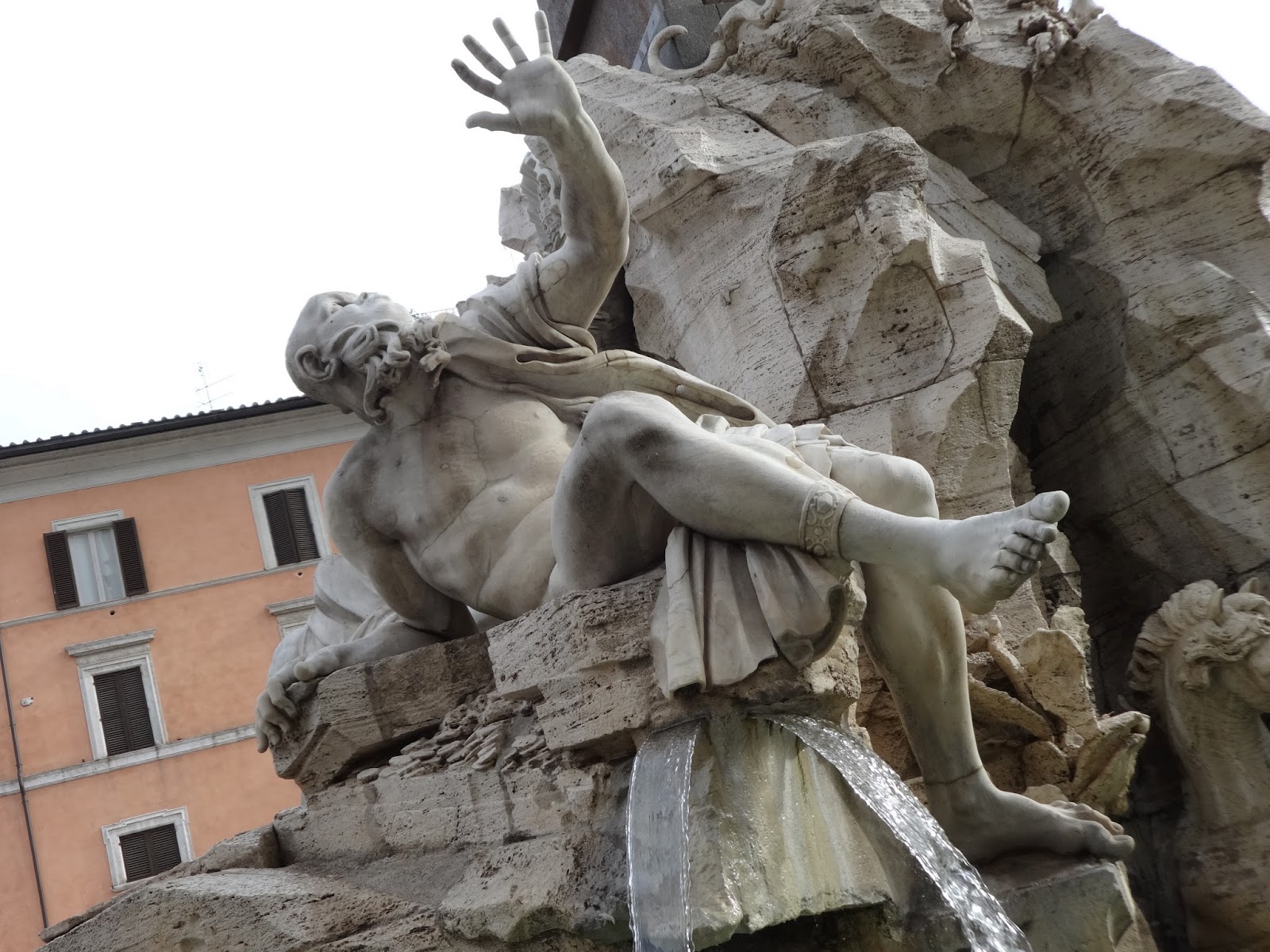 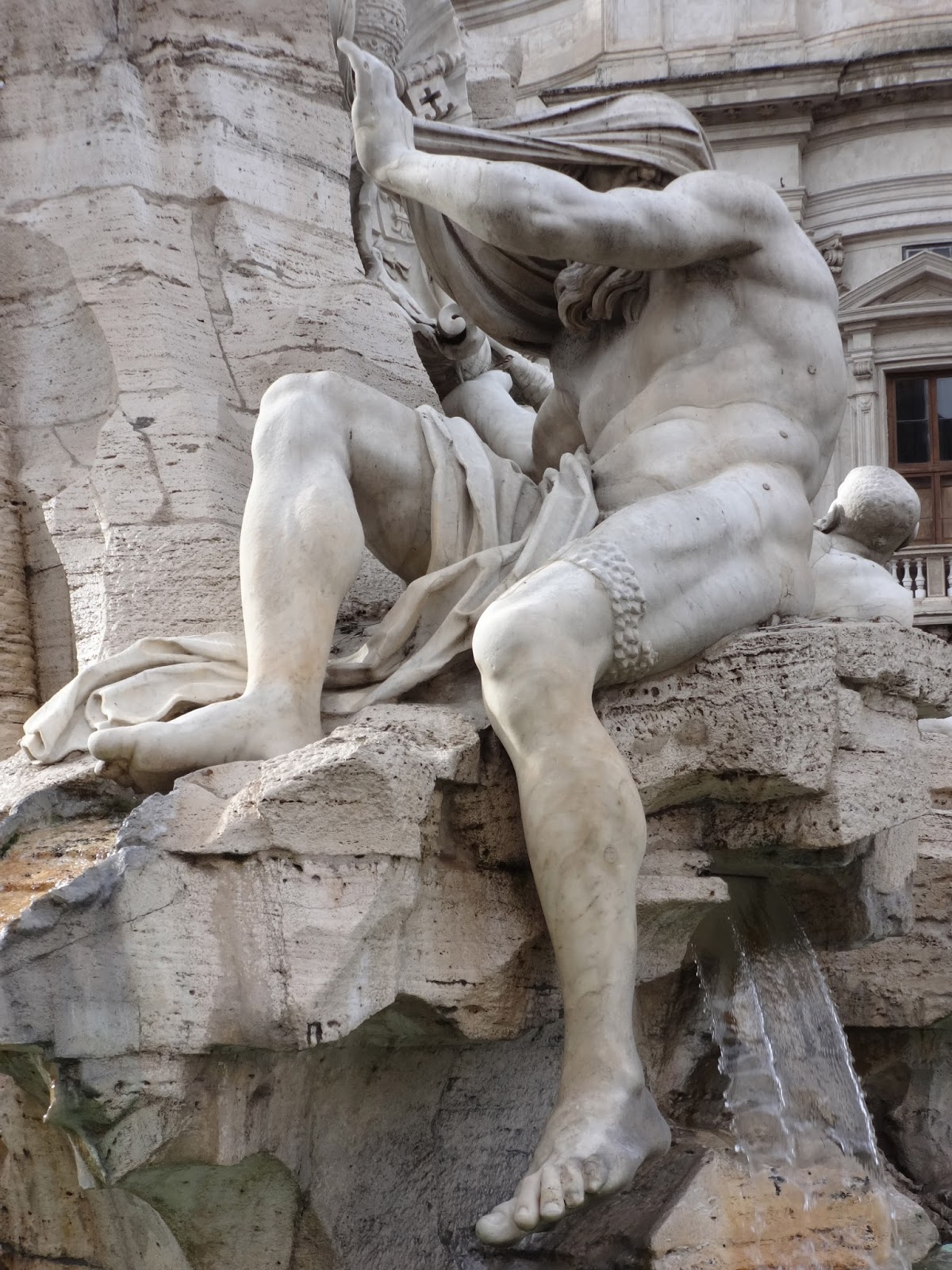 It was while admiring this particular fountain that the floor of Heaven gave way and threatened to ruin our day.  TJ and I had realized just how unprepared we were for inclement weather in the aftermath of the Jerusalem snow storm the previous month.  We promptly ordered rain/snow boots so that we would be prepared the next time.  Checking the weather patterns for our honeymoon, we wisely packed our boots so that we wouldn't be left soggy in what was to be a week of scattered showers.  Those boots were sitting in our hotel closet.  The umbrellas were sitting in the department store, as we never got around to buying them.  Fortunately, the plaza was lined with restaurants.  This seemed like as good a time as any for a quick (or long, depending on the rain) lunch.

We sought refuge in an unassuming little restaurant by the name of Ristorante Vacanze Romane that met our sole requirement:  it was open.   Imagine our surprise when the most amazing looking, and tasting, food began to arrive. 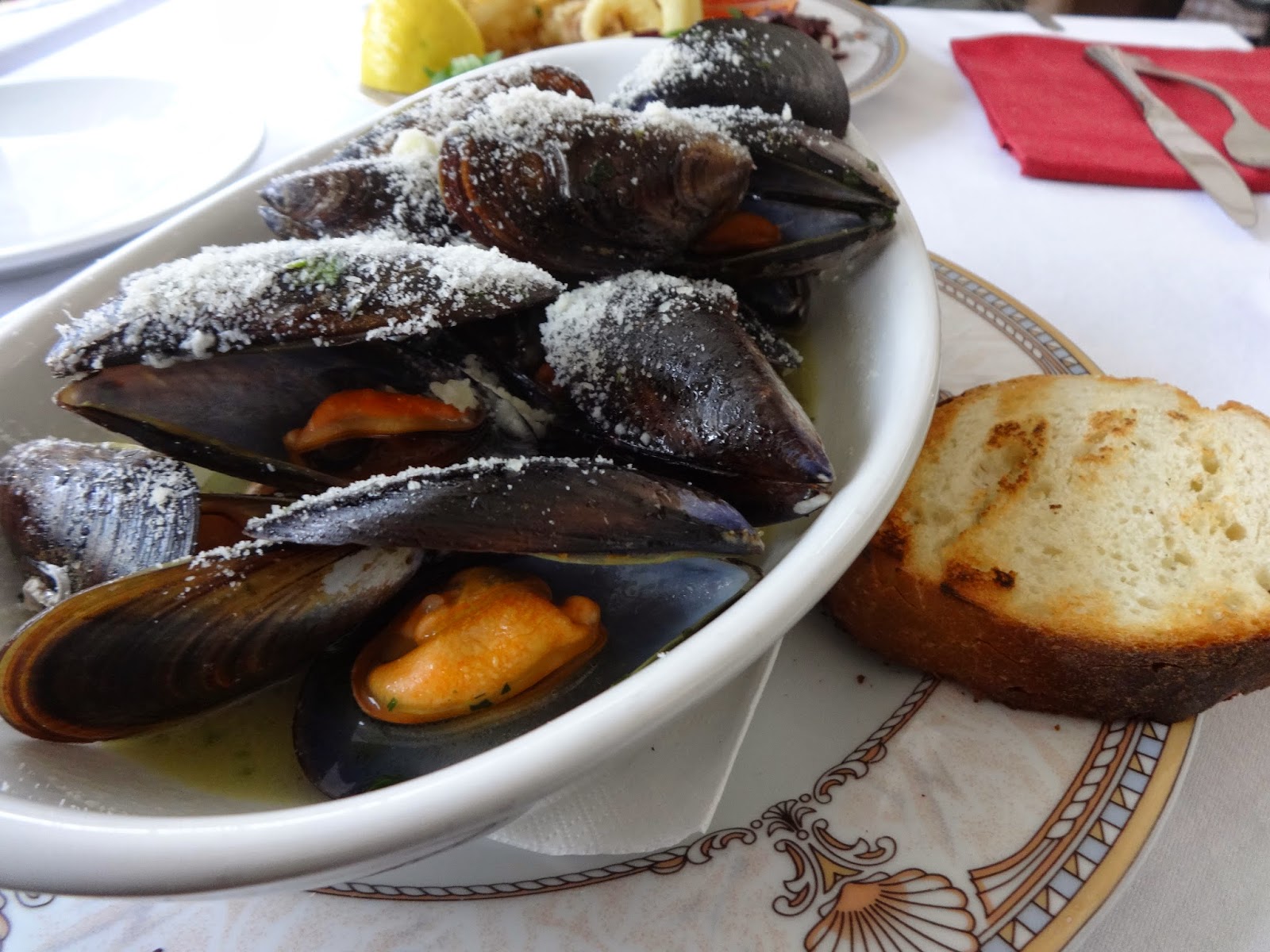 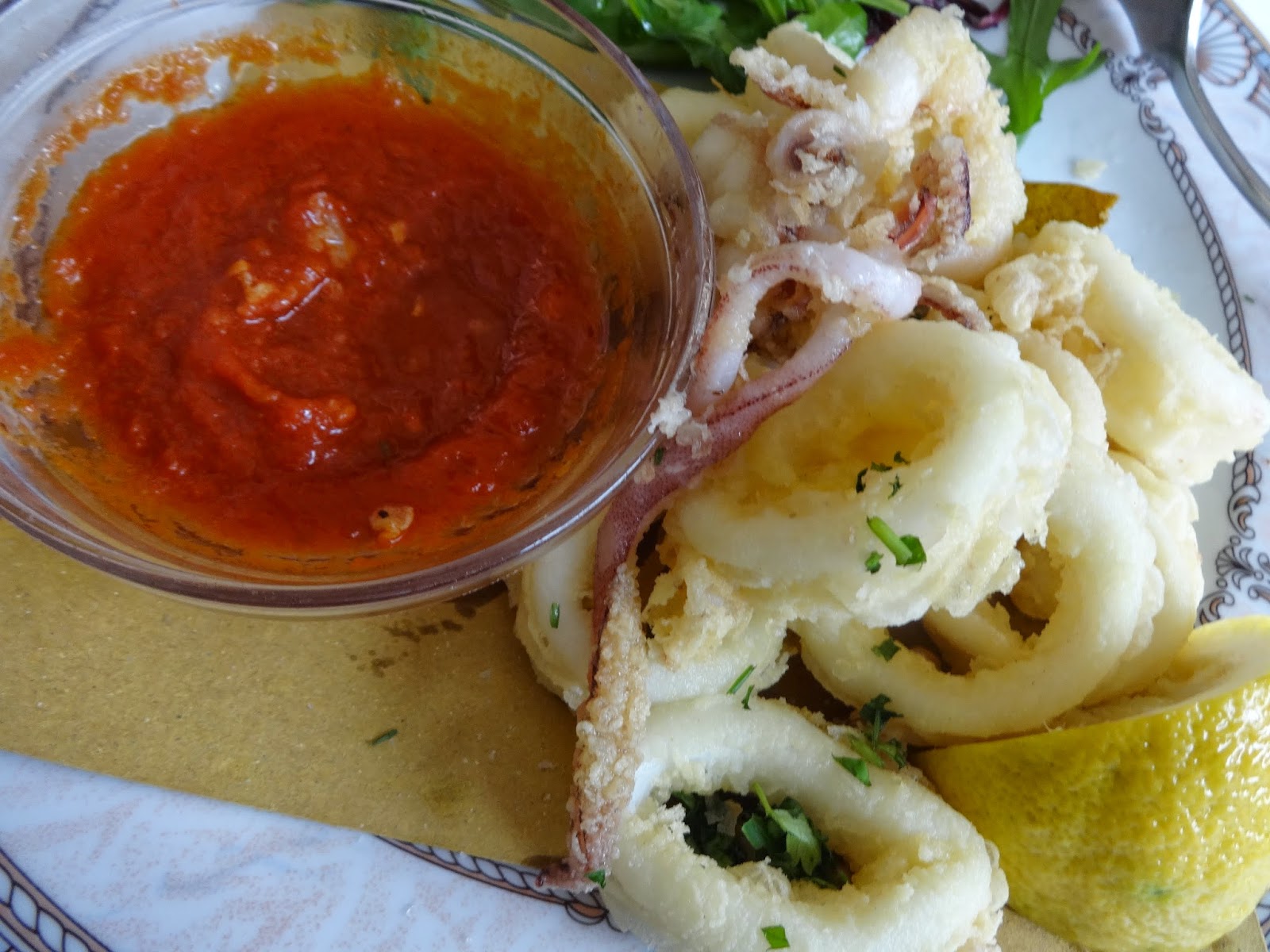 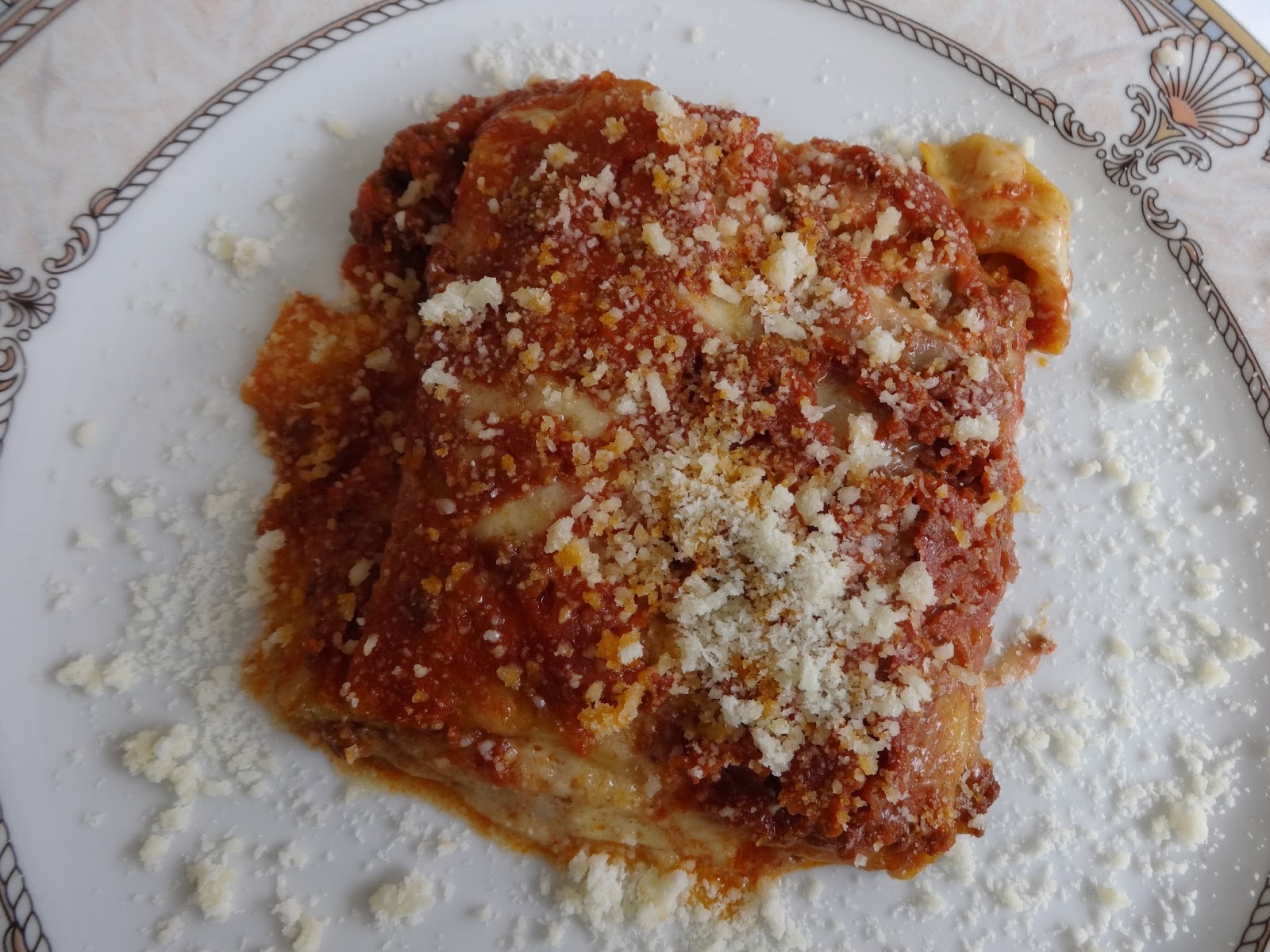 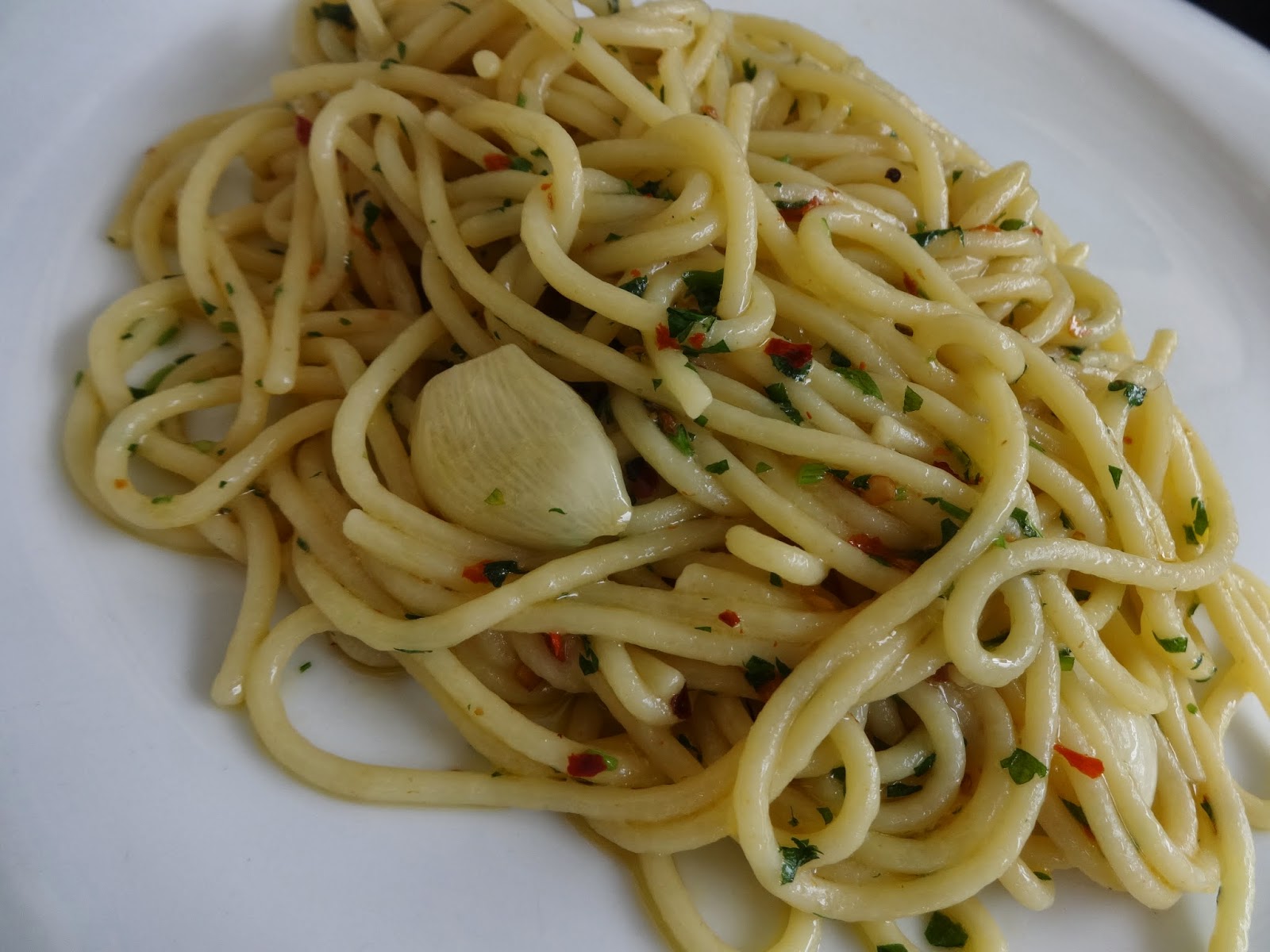 We dined under the safety of the restaurant's covered patio, which afforded us the continued appreciation of the plaza.  And then, like magic, the rain stopped when our tummies were full.

We stopped briefly to appreciate the Fountain of Neptune as we exited the plaza on our way to our next site.  TJ pointed and said "I think this one's called 'Get Off My D--k, You Octopus!'" 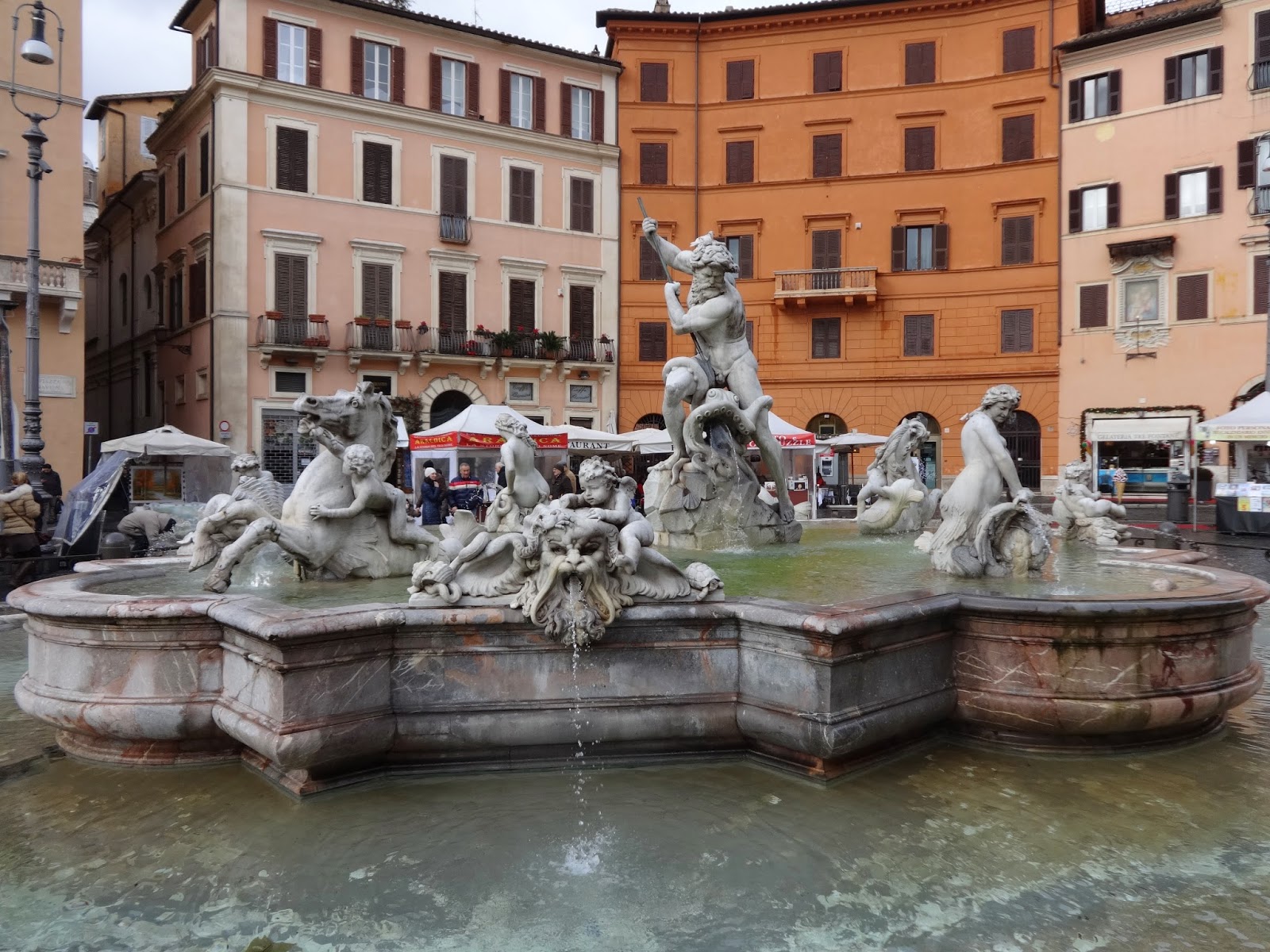 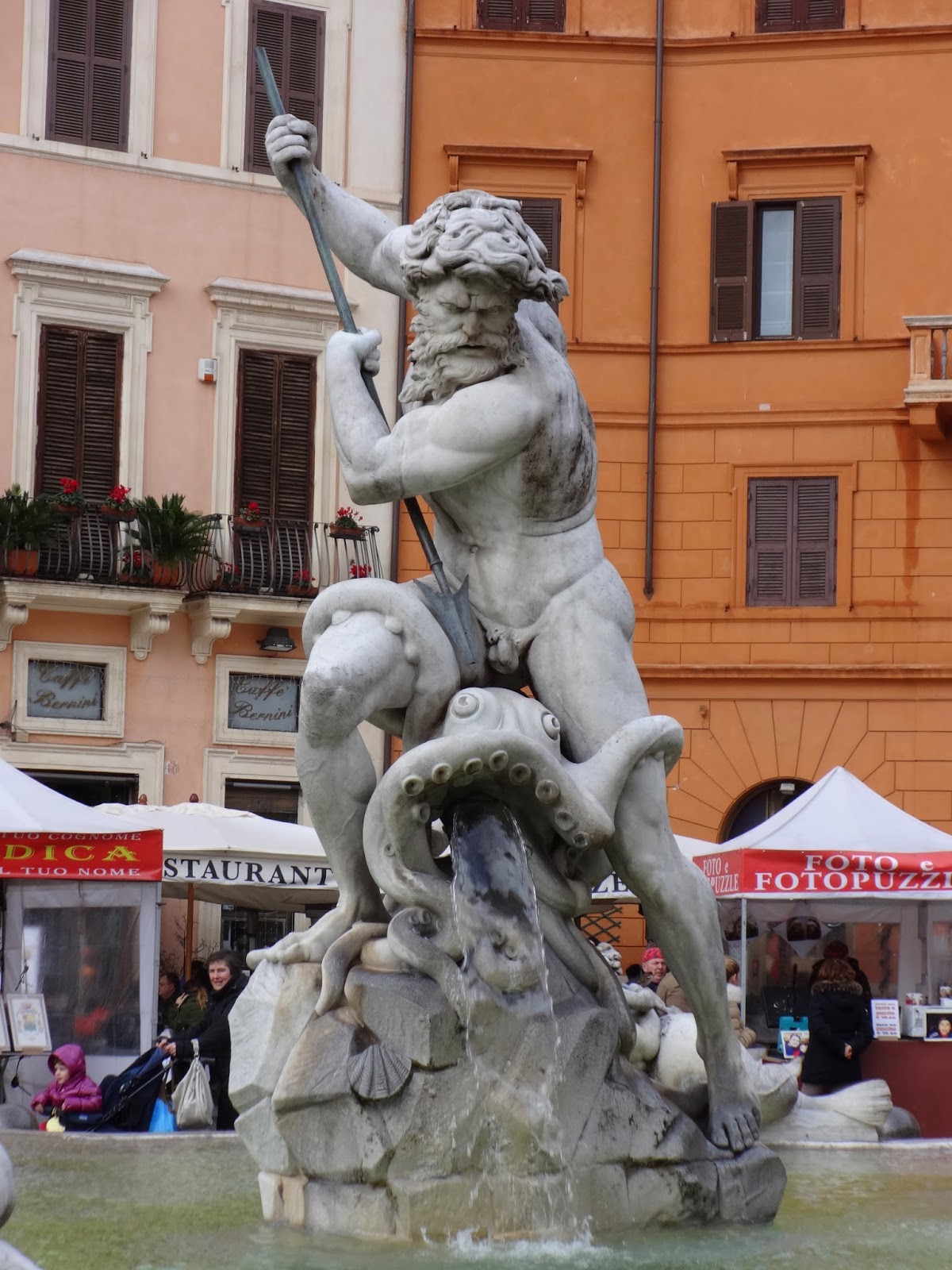 Yeah.  That's really all I have to say about this one.  It still makes me giggle when I think about it. 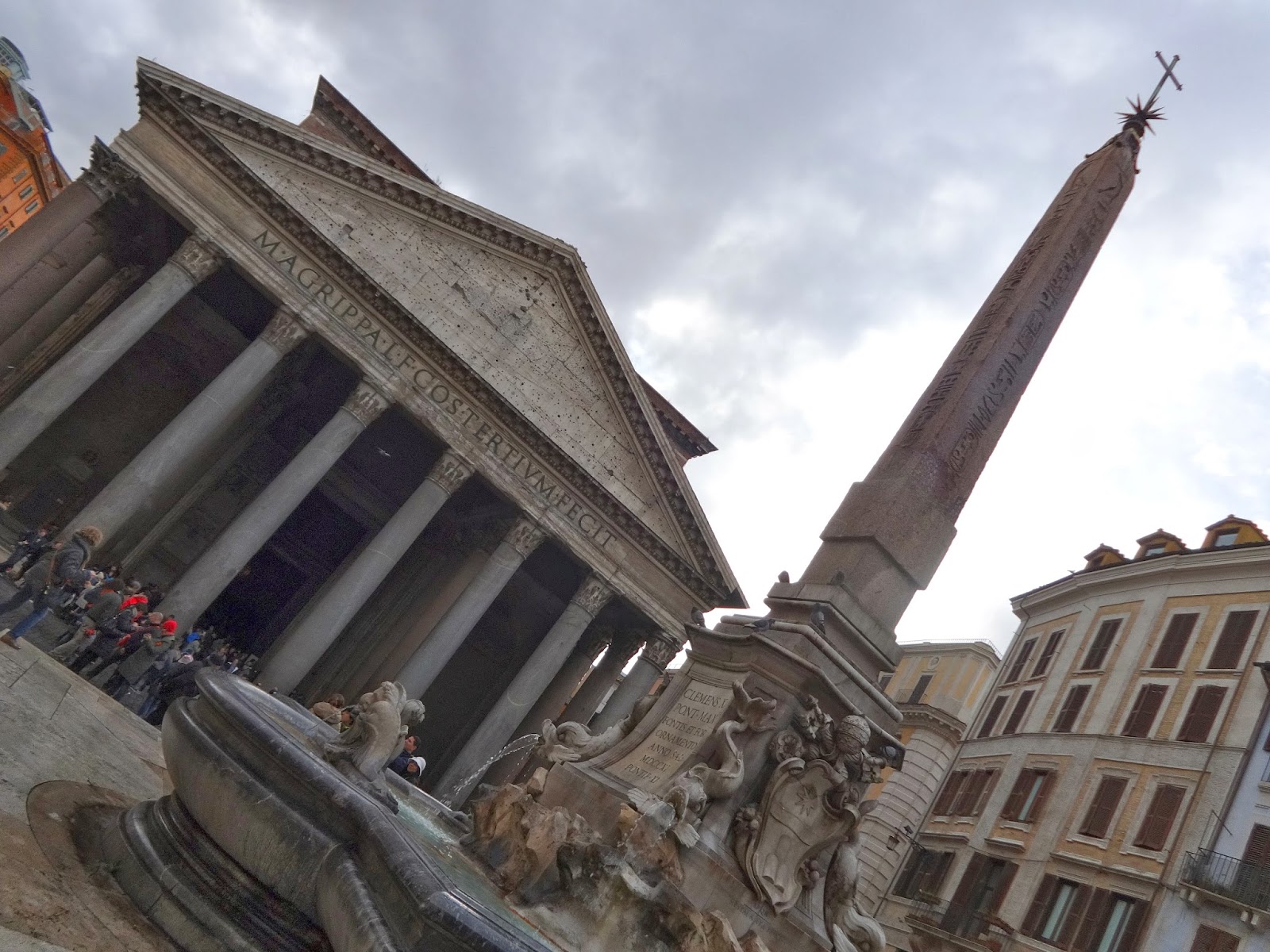 We soon found ourselves at the Pantheon, which was commissioned by Agrippa (Octavian's son-in-law and defense minister) as a temple to all the gods of pagan Rome.  The building's name is derived from the Greek "pantheion," which means "of, relating to, or common to all the gods."  The current Pantheon was built and dedicated between 118 and 125 AD by emperor Hadrian as a replacement for Aggripa's, which was destroyed by fire in 80 AD.

Sixteen corinthian columns adorn the portico leading into the circular building.  Inside, the rotunda features a concrete dome with an oculus 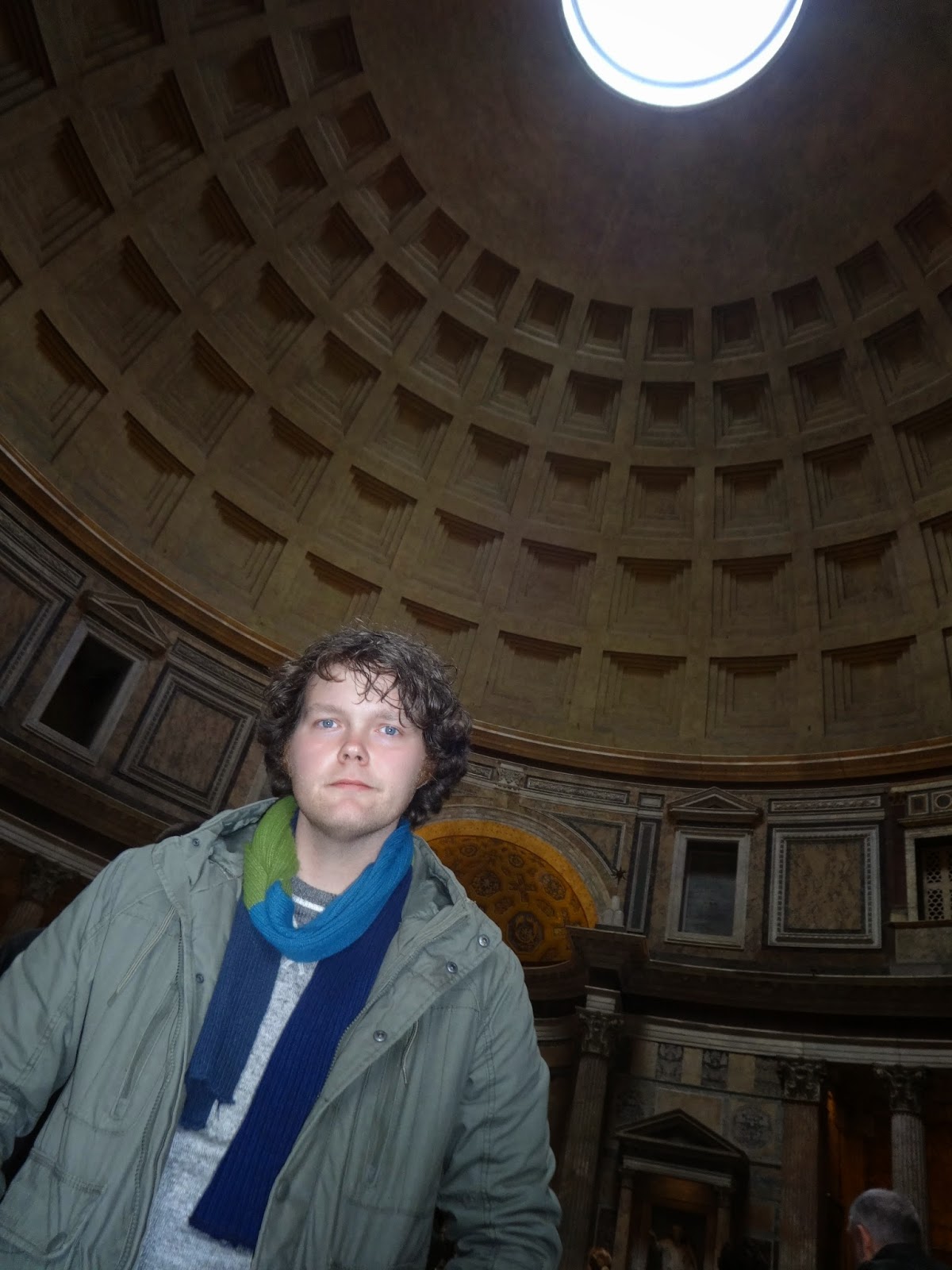 opening to the sky above.  Had we arrived earlier, we would have seen what happens to the Pantheon during a rainstorm.

From its creation in the ancient world to today's era of modern architectural feats, the Pantheon remains owner of the world's largest unreinforced concrete dome (142 feet from floor to oculus, and 142  feet in diameter).

One of the best preserved of Rome's ancient buildings, the Pantheon has been used as a Roman Catholic church since the 7th century.  It is the final resting place of Vittorio Emanuele II and Umberto I, both kings of Italy, as well as the famed Renaissance painter Raphael.

It was one of the most beautiful, ornate buildings I have ever seen.  Despite it's small, simple, and open nature (it's a single room supported by columns) I found it very easy to get lost.  Looking up, down, and all around, it took me a while to realize that I had no idea where TJ was.  I finally found him, also lost in thought, sitting on a bench looking towards the altar. 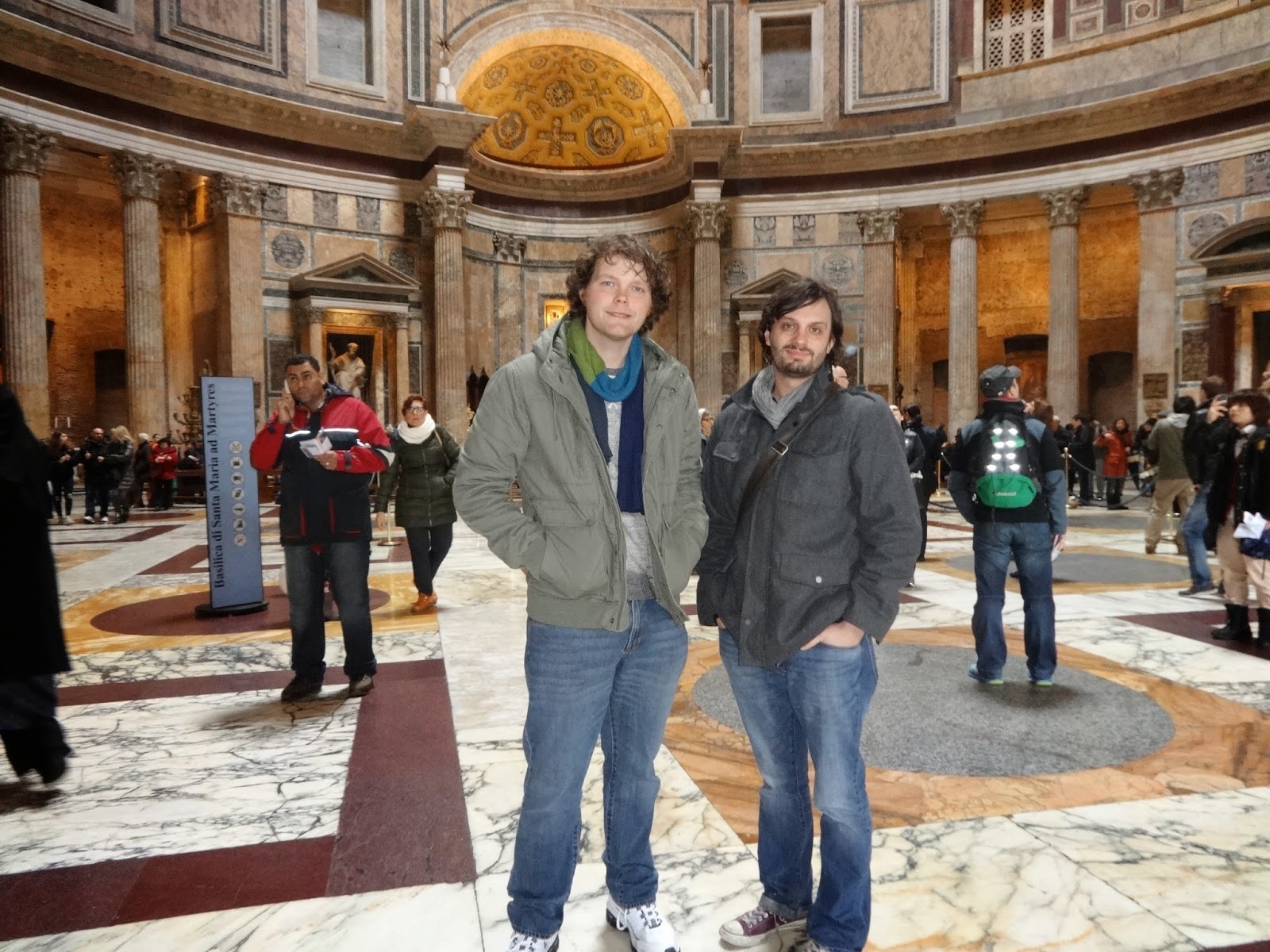 The Pantheon is a part of a "bulk offering" of UNESCO World Heritage sites that includes the Forums and Trajan's Column, which we had seen the previous day. The whole thing is listed by UNESCO as "Historic Centre of Rome, the Properties of the Holy See in that City Enjoying Extraterritorial Rights and San Paolo Fuori le Mura."  That just rolls right off the tongue, doesn't it? 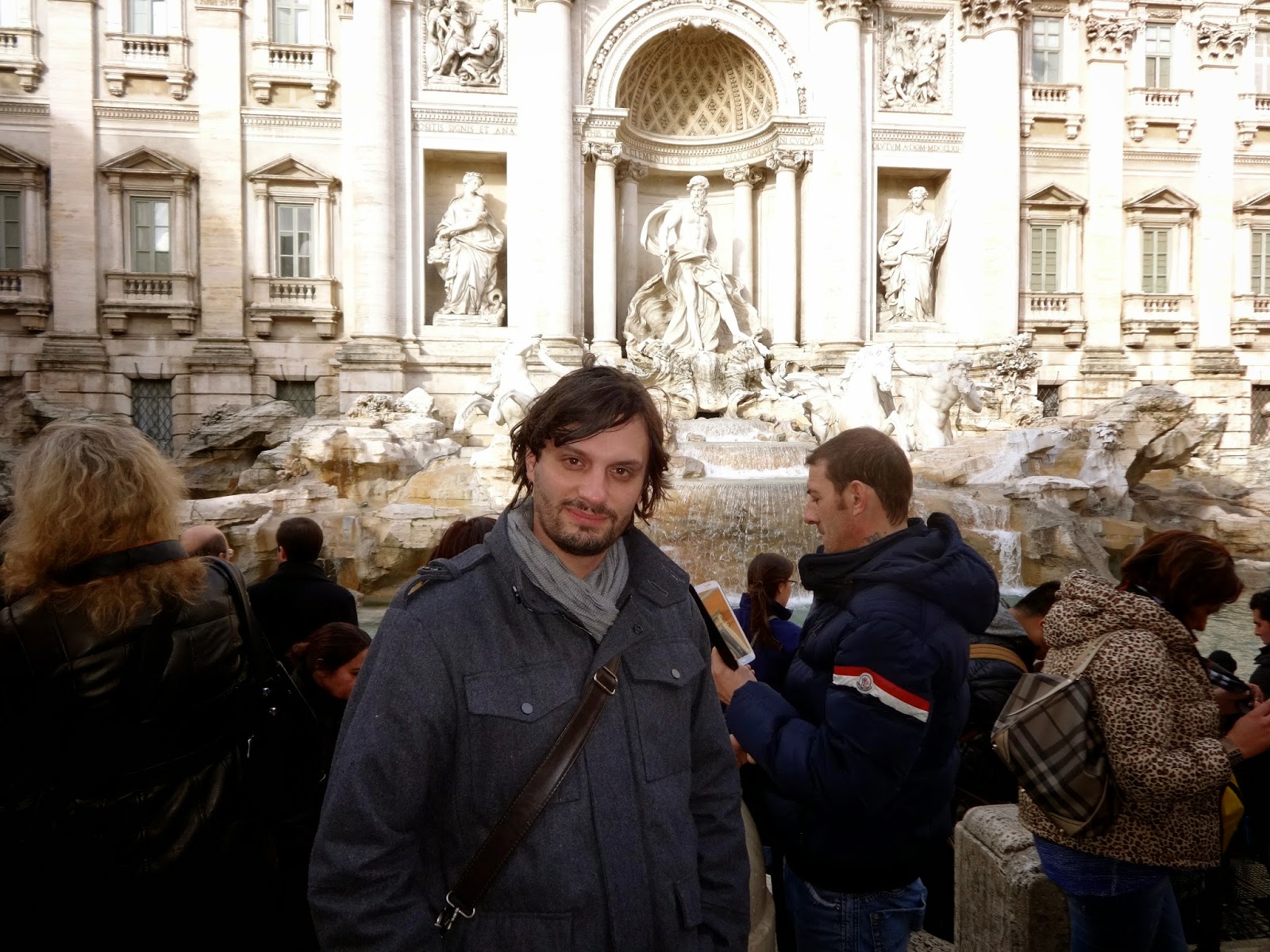 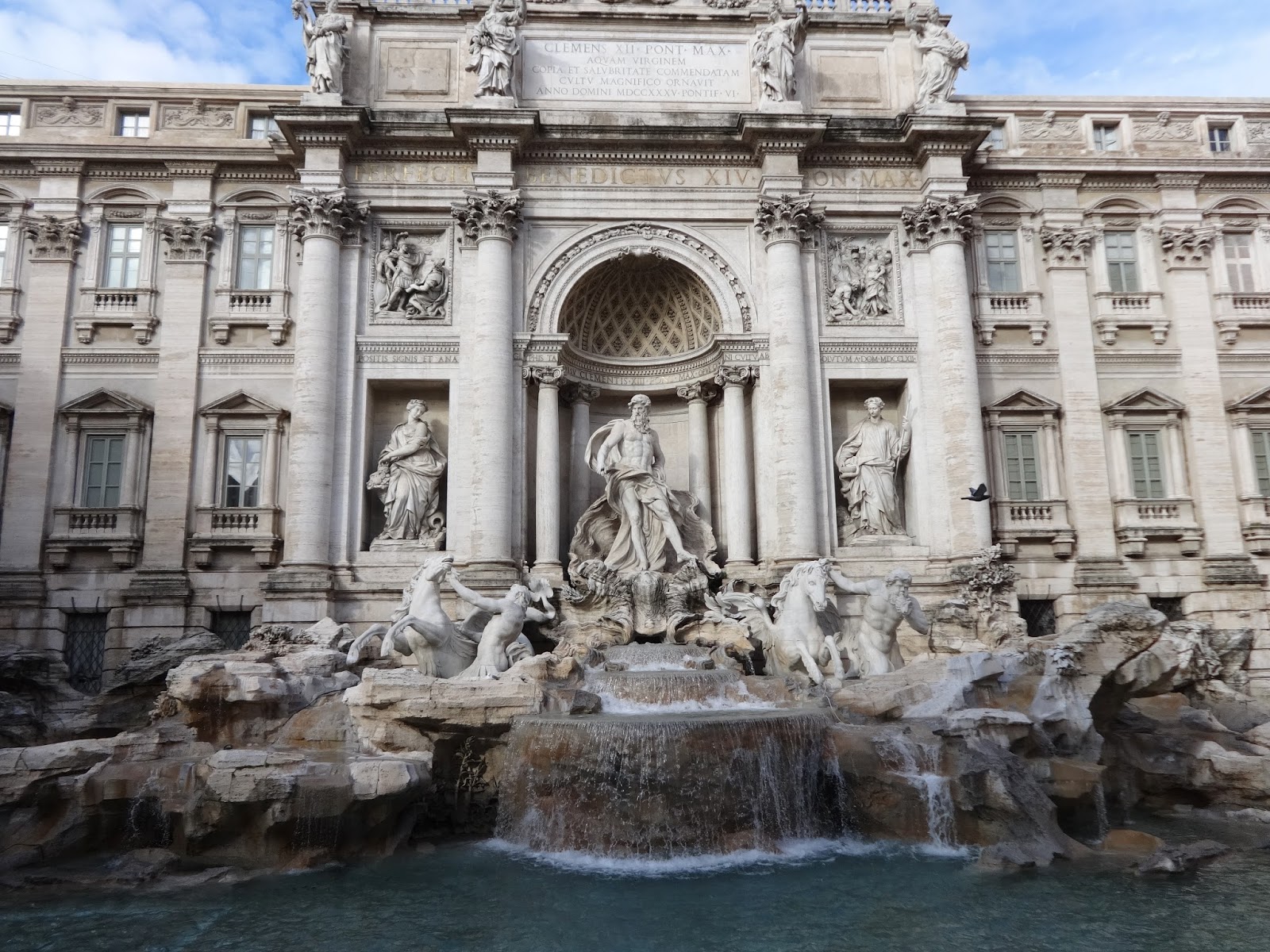 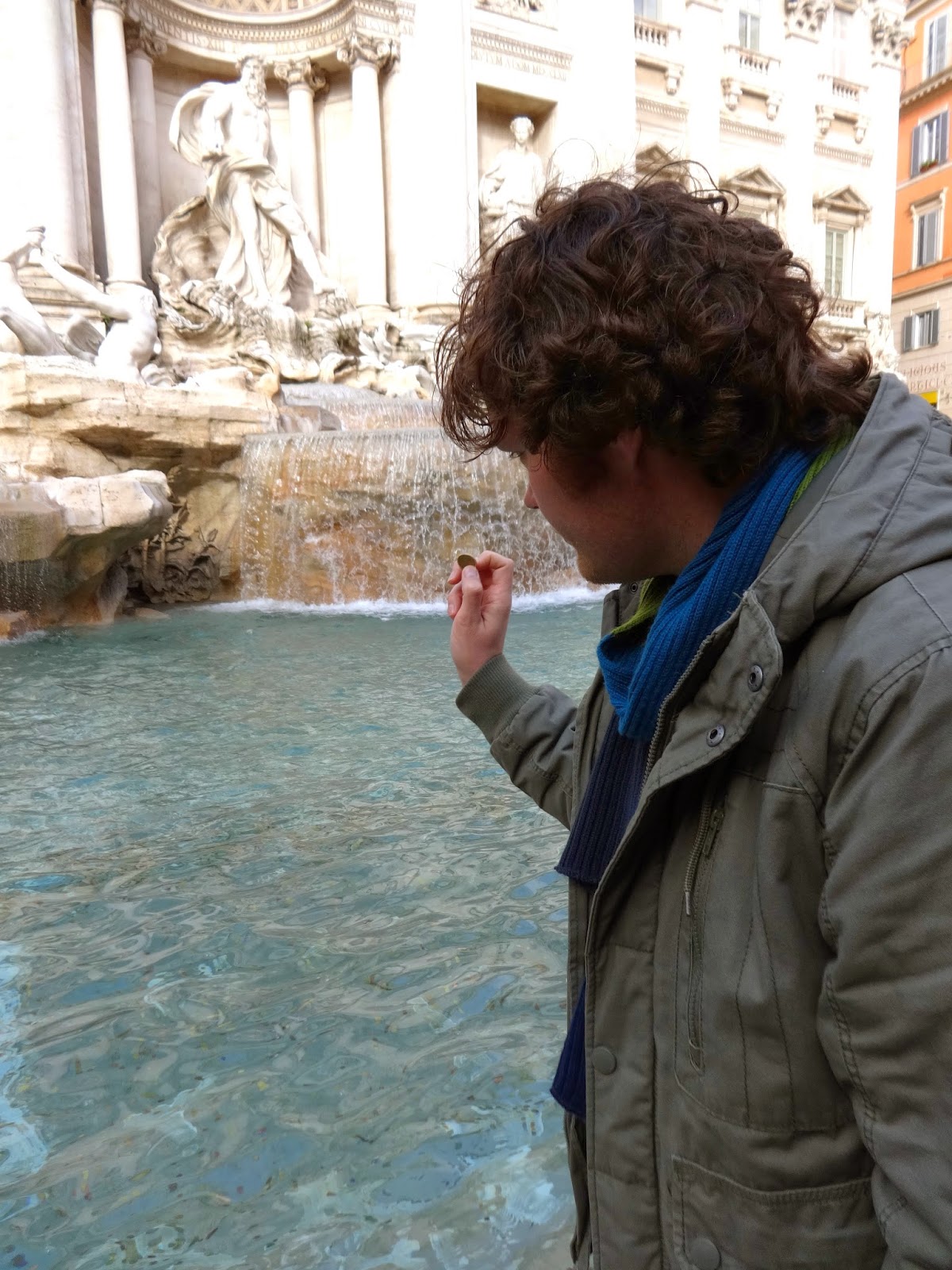 Up next was Trevi Fountain, the largest Baroque fountain in the city.  Legend tells that visitors who throw a coin into the fountain are ensured a return trip to Rome.  You're supposed to stand facing away from the fountain and throw the coin over your left shoulder.  Being the amateur that I am, I just made a wish and threw it in the old-fashioned way.  That's okay.  Following our time in Rome, we embarked on a cruise through the Mediterranean that safely returned us to Rome.  So, technically, I already got that return trip.  In yo' face, tradition.

An estimated $4,000 USD makes its way into the fountain DAILY.  Caritas, a Roman Catholic charity, uses the coins to fund a supermarket and other programs for low income families. 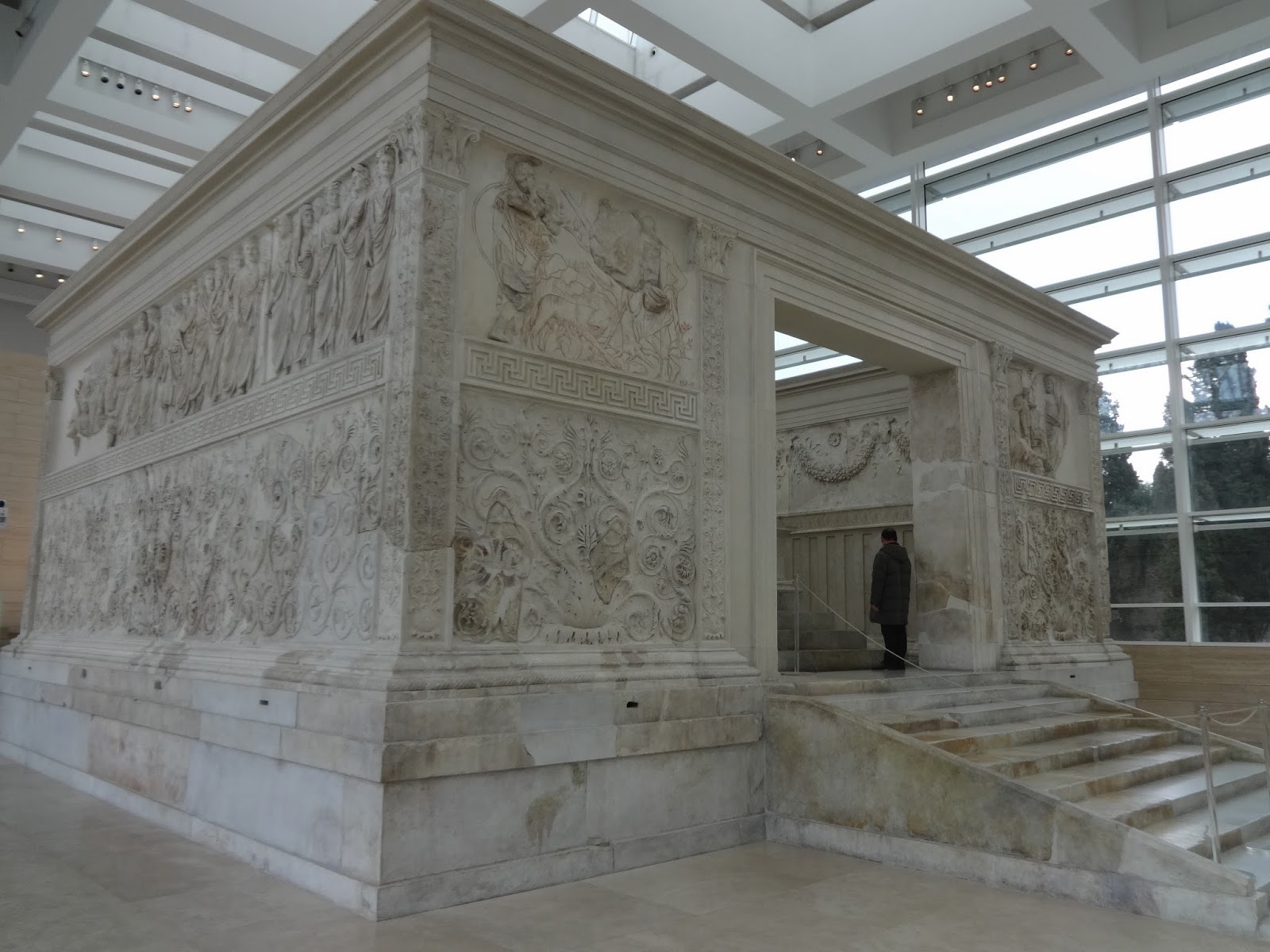 Slowly meandering our way through the city on a path that would ultimate return us to the hotel for a much needed rest, we stumbled across something that we had seen on a Travel Channel program right before our trip:  a tiny museum containing the Ara Pacis Augustae, or the Altar of Augustan Peace.  In Roman mythology, Pax was a goddess venerated by Augustus.  The altar was commissioned by the Roman Senate on July 4, 13 BC to honor Augustus's return to Rome following a three year campaign in Hispania and Gaul, and in celebration of the peace brought to the empire by his military victories.  Overall, it's pretty but not worth the price of admission (€ 8,50) unless you've just got to see it because you once saw a television program about it.  Since I called TJ out for currency confusion in my last post, I feel it only fair to note that when  I went to pay I handed the cashier twenty shekels and he looked at me as if I was the stupidest person he'd seen all day.

Our final stop of the day wasn't so much a stop as it was a second refuge from a late afternoon mini-storm.  Rome's Palace of Justice sits at the head of the Piazza die Tribunali, and if you ever find yourself seeking a dry spot in the shadow of a building that contains no awnings but is so tall that it acts as an umbrella anyway, then you could do far worse than finding one across the street from this beauty.  The storm only lasted a few minutes, but we spent the entire time gawking at this architectural marvel, built between 1888 and 1910.  Being a Sunday, the building was closed for the public. 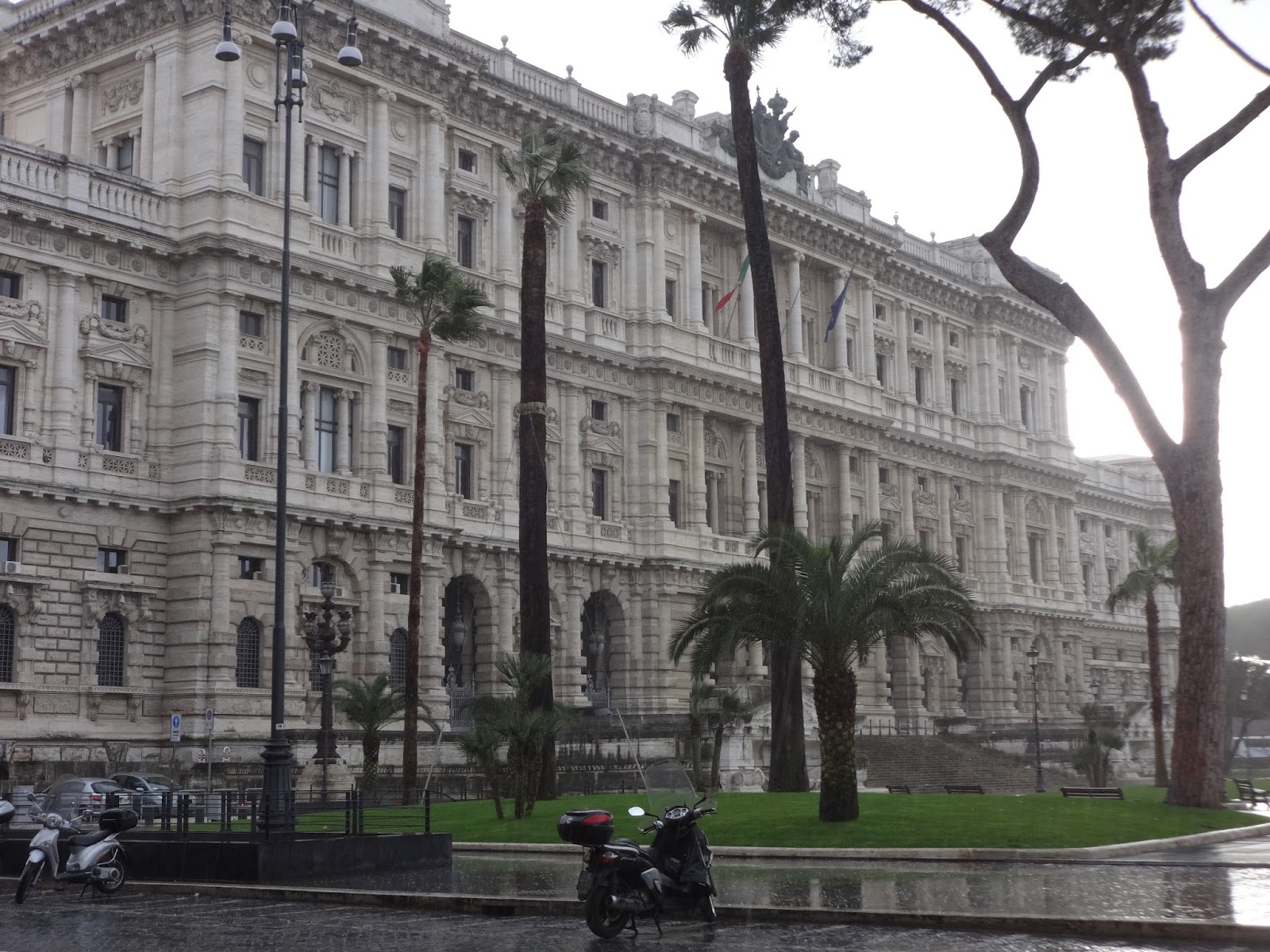 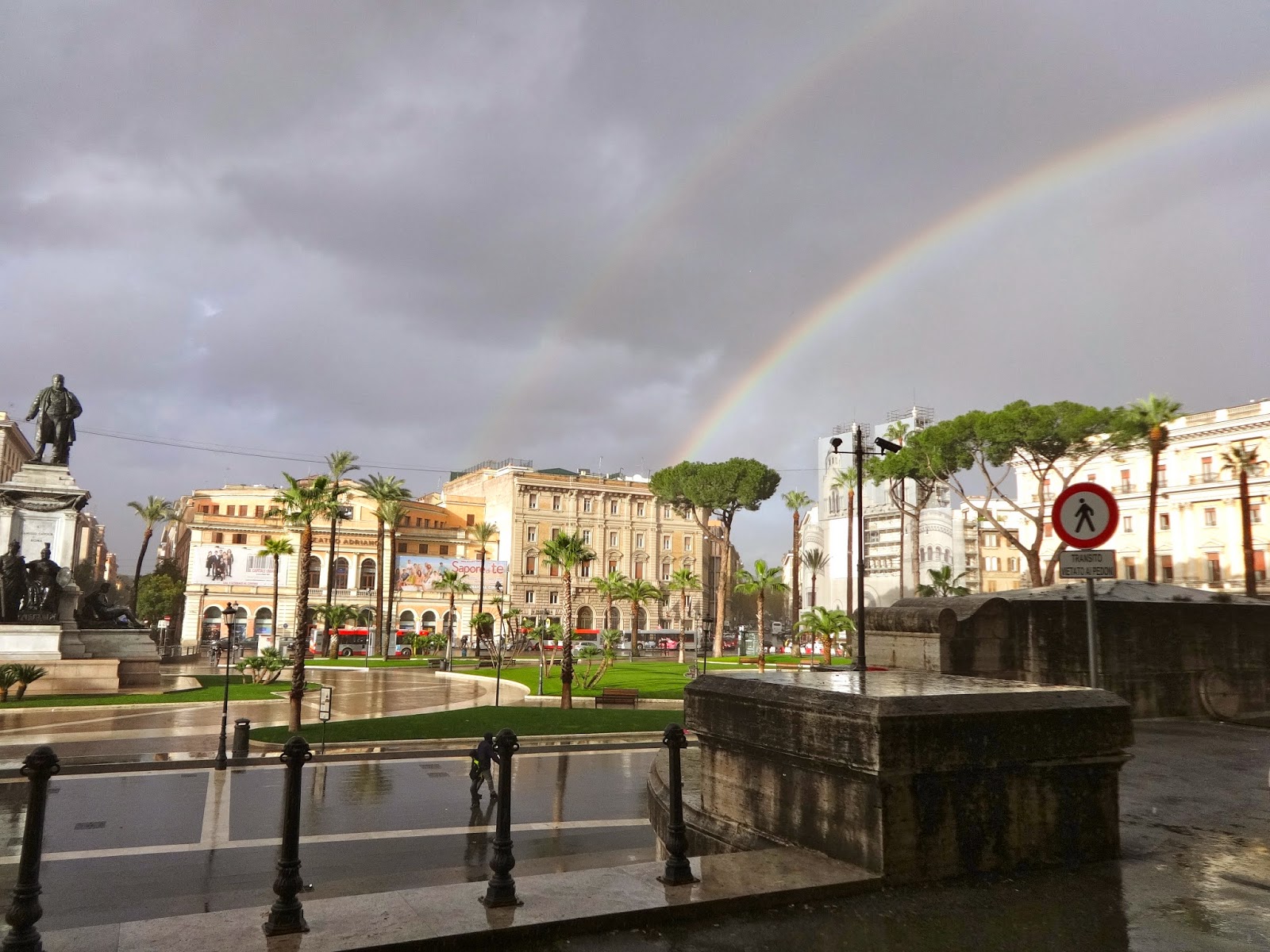 All there was to do was admire the outside, and then turn around and see the aforementioned double rainbow, which brings us full circle and to a lovely stopping place.
Posted by Aaron at 7:11 AM