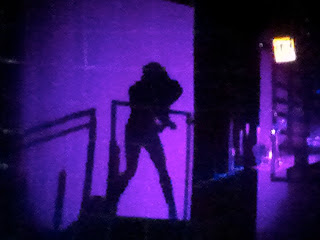 Lady Gaga performed at the Orlando House of Blues on April 6, 2009. It was a small venue, appropriate for what was the quiet before the storm of Gaga Mania.
She next appeared in Orlando on January 3, 2010, when she brought her Monster Ball to UCF Arena. Jason Derulo was riding shotgun. A significantly larger venue. Her fame was solidified.
Alas, I missed both performances. TJ has a nasty habit of not wanting to see a concert until 5 minutes before the show starts, or 5 months after it sells out (whichever comes first). I'm just as guilty for not reminding him of this fact every time he says he doesn't want to go.
Third time was the charm, though, and he readily agreed to attend the Monster Ball when it rolled into DC's Verizon Center this evening.
The grainy photo to the right is Gaga's shadow cast on a purple screen as she belts out the show opener, "Dance in the Dark." It's the best I could do with my iPhone.
Great show. Would love to see her again sometime.
What's that you say? She will be in Guadalajara this summer? Hmmm....
Posted by Aaron at 12:19 AM