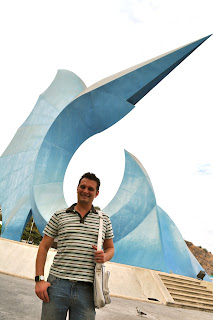 Waaayyyy back in August, TJ and I joined a couple of friends for a weekend getaway at Tesoro Resort in Manzanillo. As fun as the weekend was, I never quite felt like I actually saw Manzanillo, as we spent the entire time at our all-inclusive.

I’ve wanted to rectify this ever since, and last weekend we finally booked ourselves a nothing-inclusive hotel on the beach.

Was it everything I hoped it would be? Well, to give you an idea, this was a typical conversation in the days leading up to our weekend getaway:

Friend: Doing anything this weekend?

Me: Yep! We’re going to Manzanillo.

Friend: Great! What resort are you staying at?

Me: No resort this time. I want to actually see the city, so we just booked normal hotel.

I must have had that same conversation at least three times, and let me tell you, after visiting Manzanillo sans resort, my nose was crinkling, too.

Manzanillo is not what you would call a pretty town. Although tourism is an important industry, you can tell that it plays second fiddle to trade: The docks were overrun with merchant ships and fishing vessels. The downtown historical center is not without promise, but it could definitely use a couple of coats of paint. Something I’ve noticed about every village, town, or city in Mexico is the plethora of dining options. You can’t throw a rock without hitting a restaurant, fruit cart, or taco stand of some kind. Except in tourist-heavy Manzanillo, where dining options are inexplicably limited.

I do give credit where credit is due, and gladly share the following:

1) El Vaquero is a steakhouse well worth your time. They understand that us gringos like chips and salsa and they offer a nice variety. Their guacamole is good, their tortillas are fresh, and they serve up the best fajitas I’ve had since leaving the US (Please note: Fajitas appear to be more of an American dish, making this more a comment about me and less an insult to Mexican culinary ability).

2) The Burger King here appears to be the only one in Mexico capable of filling an order correctly.

The nightlife is miserably nonexistent. We were only able to find one club that might appeal to us, which as fortune would have it was a few blocks from our hotel. We arrived a little after 10PM to find maybe a dozen others inside. An hour later and not much had changed. We also couldn’t decide, before or after entering, whether this was a gay or straight bar. I don’t think anybody else new either. This might account for the utter lack of dancing, despite uncomfortable, desperately awkward pleas from the bar staff.

The one really cool thing about the city was this little artisan market that had been set up for the weekend beside the local Wal-Mart. We discovered the market by sheer accident on a toiletries run...since neither one of us bothered to pack that particular bag. Among the dozens of booths we found a vendor selling alebrije, a popular art style from Oaxaca that consists of hand carving animals from copal wood and then painting them in the most beautifully elaborate design schemes. We've seen this art style everywhere but had been holding off on making a purchase until we were able to visit Oaxaca itself. Sadly, as our time in Mexico draws to a close, we've realized that this particular trip will just have to wait for another time. Since this vendor had the most beautiful examples of the art we've seen yet, this was the perfect opportunity to buy.

It may sound at this point as if, other than the market, we hated the weekend, but I assure you that this is not the case. I merely wanted to be able to fully express how much I value the beach-hotel combo experience in Manzanillo. Despite any agitation I may have experienced in the city, our lodging at Camino Real was pure comfort.

We found ourselves in a suite, complete with kitchen and dining room, living room, and two full bed/bathrooms. We had a small balcony that overlooked the beach and pool deck. There were multiple pools and Jacuzzis to choose from, which the staff gladly let us use after hours. I think they were just happy to have guests, as this appears to be the down season (as evidenced but the killer rate we got on the room). 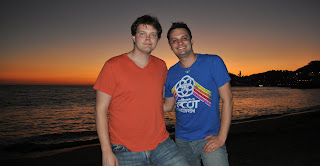 They provided us with deck chairs and a large umbrella, and we spent quality time together reading on the beach, listening to music, and splashing around in the ocean. The water did turn brown and frothy one afternoon, but I can’t blame the hotel for that, as it was the red tide rolling in, and I certainly couldn’t say whether or not the same scenario played out on the other side of the cove at the all-inclusives. Regardless, I was out of the water by then, so you’ll hear no complaints from me.

Our final morning saw us waking at dawn to watch the sun rise over the Pacific. Leaning out the window, we quickly saw that we weren’t alone. A small fishing boat and its hardworking crew were battling the gulls, pelicans, and ducks for the day’s fish haul. We found ourselves migrating to the beach to watch in fascination as this hour-long spectacle played out. Our excitement slowly morphed to sadness as it became obvious that those fish unfortunate enough to come ashore prior to the main net being tied off would die for nothing. Drying out on the beach surrounded by fisherman too lazy to throw them in with the main haul, these fish would simply be abandoned to…I don’t know what. Maybe the birds will take them later. I’m by no means a vegetarian (see fajita comment) but I do think if you’re going to kill something you should at least make use of it.

Okay, sorry. I’m stepping off of the soapbox now.

Long story short, I love this town…if looking out of an ocean-facing window from my (preferably all-inclusive) hotel room. I feel that most people must surely agree.

As I sat down today to write this blog, I had to think of all the cruise ships that visit Manzanillo over the course of a year. The beaches and accompanying hotels and restaurants are generally nice, but the city itself is lacking in …well, just about everything. What could those ships actually sell you as an excursion? Certainly not a night at a resort, as that’s someone else’s gimmick. I did some snooping around on cruise line websites, but didn’t find much to write home about. When I visited Yahoo! Travel, this is what I found: