Selena Gomez & the Scene: We Own The Night

Oh, how times have changed. In May of last year we were "forced" to spend a week in Mexico City when security concerns in Mexico prevented us from being able to attend the Guadalajara leg of Ricky Martin's Música + Alma + Sexo tour.

Last night I found myself in the very arena that eight months ago was out of reach, travelrestrictions having now been lifted.

Arena V.F.G. (Named after famed Mexican singer Vicente Fernández Gómez) is an indoor concert and sports venue located on the outskirts of the city, just past the Guadalajara International Airport. Okay, well, indoor is a bit of a misnomer. It really looks more like an outdoor rodeo arena that had a metal frame constructed over the top that was then covered with siding from Sears.

That description alone should make you think that the acoustics aren't the best. It's not bad, though. It's terrible. It won't hinder the concert-going experience for someone familiar with the artist, and who plans to sing along merrily. Those that like to go and experience new music will find themselves sorely disappointed however, as they will be unable to appreciate much of the music or lyrics through the echoes and feedback. Fortunately, I fell into the former category. 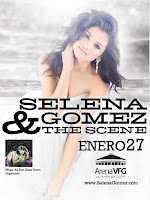 Selena Gomez & the Scene arrived...on the scene (ha! wordplay!)...last night to entertain a crowd of 12,000+ teenaged girls and gay men with an impressive set list of twenty of their greatest hits.

Okay, okay, so they've only had seven singles. They're enjoyable singles, though, and all seven were present last night. The rest of the show was filled out with entertaining songs that you'd a least be familiar with if you had given the CD's a once- or twice-over.

"A Year Without Rain" "Hit the Lights" "Round & Round"

"Love You Like a Love Song" "Spotlight" "Bang Bang Bang"

"When the Sun Goes Down" "Intuition" "We Own the Night"

"Off the Chain" "Whiplash"

"Tell Me Something I Don't Know" "Naturally"

TJ did not join me for this evening of tweenaged entertainment. Despite being an avid A-Teens fan, he felt this was a little too adolescent even for him. Fortunately, our friend Yeyo had no such misgivings. We had a great time singing, dancing, and making fun of teenaged girls that scream at anything that sparkles and/or moves on stage. 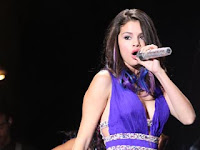 I don't care that she's 19 years old and people make fun of me for liking teen pop. Selena Gomez is a beautiful young woman with an undeniable vocal talent. She's a Disney kid after all. The mouse doesn't mess around.

I've never seen Wizards of Waverly Place, the Disney Channel program that gave her her big break. I hadn't even listened to much of her music before I decided that I wanted to go to this show. But I loved her anyway.

I loved her because when we arrived in Falls Church and began our new lives in the Foreign Service, her single, "Naturally," was a staple in every bar and club. It's such a youthful, innocent, playful tune, and it really stood out from both the snobbery of the club scene and the self-indulgence of most artists on the airwaves.

I loved her more when we arrived in Guadalajara almost a year later and discovered that "Naturally" was a staple in every bar and club here, too. I'm not sure how it happened, but I've had Selena Gomez songs dedicated to me no less than three times in the last year. Ridiculous, but kinda cute.

We'll discover what our onward assignment is soon. We have no idea where we're going, what language we will have to learn, what type of people we will meet.

But everything will be okay. Naturally.