Clocking in at over 13,000 ft², Guadalajara's San Juan de Dios market can easily call itself one of the largest indoor markets in Mexico.
The market was designed by Austrian architect Alejandro Zohn (1930-2000), a Holocaust survivor who immigrated to Mexico during childhood and studied both engineering and architecture at the University of Guadalajara. 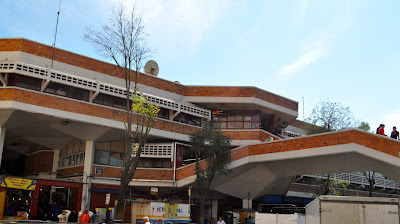 The market, which opened on December 30, 1958, features almost 3,000 vendors that work 365 days a year selling a wide variety of items, including:

The market is broken up into three levels. On the top floor you will find the majority of the clothing and home entertainment items. The second floor is a maze of food vendors selling typical Mexican cuisine that smells and looks delicious. The bottom floor is where you can stock up on fresh produce and sweets (and birds...but don't worry, they're kept separate). That bottom floor is where we found ourselves last Saturday.

I've been to the market several times, just to browse, and always find myself disoriented by the sheer enormity of it all. But last Saturday we were on a mission. You see, my dear TJ had decided that it was finally time that we start canning and preserving our own fruits and vegetables. All we needed was a ginormous enamel and/or stainless steel pot and several pounds of cucumbers and tomatoes. Bet you thought we needed a parrot, didn't you?
For as long as I've known him, TJ has had no hobbies. Or rather, he has had no hobbies that cost us any money. And yet he patiently (sometimes. usually. for the most part.) sits by while I feed my addictions for books, comic books, music, movies, and all things He-Man. Very rarely does TJ decide he wants a hobby that costs us money, but even when he does it's usually something that will bring value to us both.

Like the last time, when he decided that he just had to have a sewing machine. One horrid looking terry cloth robe later, and that's all she wrote. I don't even know where the sewing machine is, and I'd bet he doesn't, either. But that was almost three years ago. So if he wanted a stock pot, he could have his stock pot.

After a quick stop by the market for a stock pot and some chile peppers, we headed over to Mercado de Abastos (maybe the subject of a future blog) to scope out their produce. We found some awesome cucumbers and tomatoes and were soon on our way home to act like country folk.

Step Three: Stuff Cucumbers and Additional Seasonings Into Jar, Add Juice
Step Four: Pickles (...well, in three months)!*
*Not shown: Tomatoes. I got bored and read a book.
There's not a lot to say about canning and preserving your own foods. Well, I'm sure there is, but I'll just leave it at this: To me, it was just a fun activity to do on a weekend afternoon, with the steam from the giant pot sending vivid thoughts of a witches brew through my head. To TJ, it was a warm memory of simpler childhood days spent with his Maw Maw.
And for that alone, I think this is a hobby that'll stick around for a while. I fully support this.
You know, unless we pop those jars open in three months and die from botulism.
Posted by Aaron at 7:26 PM