Living it Up at the Dead Sea

I remember one sunny springtime afternoon when I was walking home from work with a colleague who lived nearby.  We were discussing regional travel as we descending the steep hill on top of which our office sits when he suddenly commented that he could not believe TJ and I had not yet visited the salty tourist spot known as the Dead Sea.  "It's no big deal," I said, casually pointing southeast of our current location.  "It's right there.  I see it every day."

I could play it cool all I wanted, but we all know that seeing isn't experiencing.  I was dying to visit the Dead Sea.  It was with great joy that I was finally able to take a dip on June 22nd when we visited the Ein Gedi Sea of Spa resort. 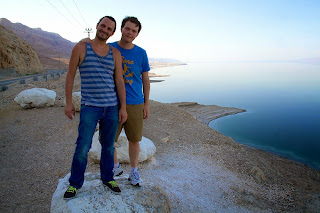 The Dead Sea came by its gruesome moniker due to the fact that the harsh environment created by its high salt content makes it difficult for animals to flourish there.  Weighing in at approximately 35% salinity, it is one of the world's saltiest bodies of water.  It is the world's deepest hypersaline lake (1,004 feet deep).  And, because it likes to be the best at what it does, it also features the lowest land elevation on the planet, with a shoreline sitting at 1,400 feet below sea level. 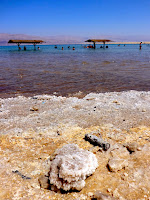 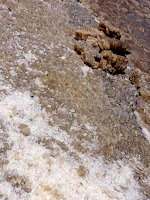 Chunks of salt rock scattered across the shoreline

Located approximately 35km from Jerusalem, the Dead Sea is a landlocked body of water surrounded by Jordan to the east and Israel and the West Bank to the west.  It has attracted tourists for thousands of years and numerous spas and resorts have popped up on both the Jordanian and Israeli shorelines.  Although the Israeli side is more convenient to reach from our Jerusalem home, we've heard it said that the customer service is superior on the Jordanian side.  Perhaps one day I'll do a comparison piece about weekend travel accommodations, but this particular visit was just a quick in-and-out.  So far as I could tell, the service for a simple afternoon visit was more than adequate. The staff at Sea of Spa were friendly.  They gave us towels.  They provided safe and secure storage for our personal belongings.  They sold us beer. I couldn't possibly ask for more out of a short afternoon visit.  The resort was undergoing some construction/renovation, so there was a bit of a "Pardon our Dust" feel to the place, but it didn't detract from or enjoyment.  I'd definitely suggest it for someone's initial Dead Sea experience.

We began our visit with a dip in the sulfur pools.  Sulfur pools are usually found around volcanic areas and hot springs, and are apparently full of keratin proteins, which are key structural materials in the creation of skin, hair, and nails.  All I know is that sulfur stinks to high heaven.  The warm water was very relaxing, though, and left my skin feeling soft and silky.  It was also slightly buoyant, which helped prepare us for what came next.

The seawater of the Dead Sea has a density of 1.240kg/L, which means that natural buoyancy turns your afternoon swim into something more akin to a casual float.

Walking in the water is fine; you carry on as you would at any beach.  It's not until you attempt to transition from a vertical to a horizontal position that things get wonky.  If you aren't careful, you'll find yourself rolling around like a fishing bobber.  Once you find your center of gravity, though, you will be able to enjoy a relaxing lounge without need of treading water or focusing on that perfect floating position.  Word of advice:  do NOT get the water in your eyes.  It will burn like fire.  Lots of parents failed to educate their children regarding this, and screams of pain could be heard all around.  Also, don't get in the water if you have an open cut/sore...that, too, will burn like fire.

The Dead Sea is known for more than its unique swimming opportunities.  It is also famous for being a natural health spa, and merchants claim to be able to bottle its "healing powers."

Sea salts and body lotions are produced and sold on the international market, while visitors are able to spread deposits of black mud all over their bodies, which is said to provide the skin with nourishing minerals. 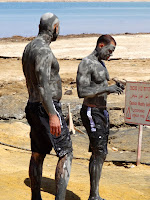 I'm shy. So please enjoy muddy pictures of strangers.
Especially the hottie on the right.

We spent several hours at the resort, rotating back and forth between floating in the sea, cooling off in the pool, slathering ourselves in mud, and enjoying a beer in our deck chairs.  We were each given a bottle of Dead Sea foot cream as a parting gift.  All in all, it was a great foray into Dead Sea indulgence.

I'd like to say that we've been back since that wonderful June day, but we haven't.  There were many contributing factors, other travels and increasing security concerns within the country being but two of them.  I'll touch on both in the coming days.  Suffice it to say that, with 9-10 months left in Jerusalem, one or two return trips, minimum, are on the to-do list.
Posted by Aaron at 1:01 PM