On July 4th, we traded fireworks for ocean views and visited Rosh Hanikra with our friend Jeremy. 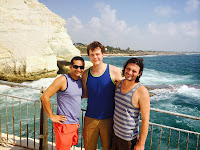 Located along the coast of the Mediterranean Sea in the Western Galile, Rosh Hanikra is a national park notable for its white chalk cliff face and beautiful, natural, grottos.

The steepest cable car ride in the world (so they claim) awaits you at the entrance to this seaside destination near the Israel/Lebanon border.  The car descends from a height of 70 meters above sea level at an angle of 60 degrees.  The ride takes approximately two minutes in either direction and affords breathtaking aerial views of the sea and cliffside that visitors will soon see up close and personal. 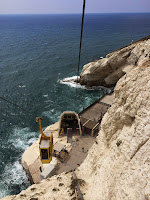 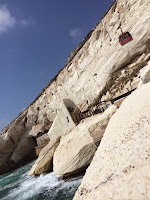 Upon exiting the cable car, you are invited to view a short film that tells the tale of ancient Rosh Hanikra. 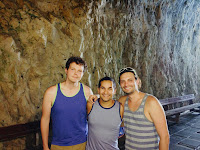 Legend speaks of a young Israeli woman from Akko that was betrothed involuntarily to a wealthy old man from Lebanon.  Distraught over her lot in life, the young woman is said to have leapt from her horse into the Mediterranean Sea as her father escorted her on the journey to meet her future husband.  The ghost story claims that her sad song can be heard deep within the grottoes to this very day, worn deep into the cliff by the crashing waves. 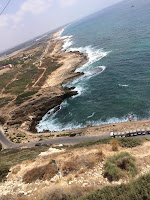 This probably didn't happen.  Or maybe it did.  All I can say is that I didn't hear any ghost whisperings, and arranged marriages continue to this day, making this an interesting, yet failed, cautionary tale.

The grottoes are arguably the main attraction here.  They formed hundreds, if not thousands, of years ago when a series of earthquakes ripped holes into the bedrock.  Rainwater trickled into these rifts, dissolving the rock and forming tunnels and caves that even now continue to expand due to the intensity of the waves crashing into the ageless rock. 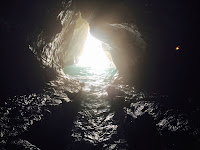 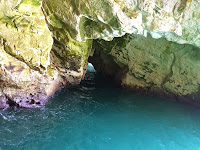 The grottoes aren't the only point of interest, however.

The British Train Tunnel has quite a storied past.  It is a carryover from the days of World War II, during the British Mandate in Palestine.  During the war, a need arose for a land continuum between the Middle East and Europe.  The British, with the help of thousands of laborers from the Australian, New Zealand, South African and local workforce, laid down the track for a rail line between Haifa, Beirut, and Tripoli. 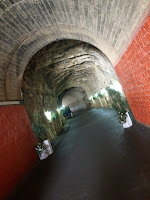 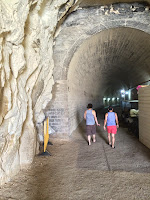 Within the span of just one year the men bore 200 meters of tunnel into the rock of Rosh Hanikra, suspended 15 bridges along the route, and built supporting walls to fend off the sea waves. 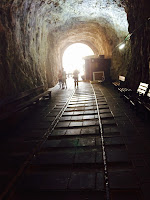 The tracks that passed through these tunnels served the British for their military needs between 1943 and 1948.  In 1944, this rail system was used to bring Jewish concentration camp refugees to Israel.

During the 1948 Arab-Israeli War, the western Galilee was cut off from the rest of the country.  The bridge was blown up in March 1948 to prevent the passage of Lebanese weapons and soldiers into the region.  Though the train no longer runs through the area, the tunnel and sections of track remain as evidence of Rosh Hanikra's important role in the history of this region.


Clocking in at just over two hours commuting time from Jerusalem, Rosh Hanikra makes for a beautiful change of scenery and a worthy option as far as day trips go. 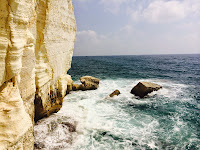 To ensure a lovely day, please verify that your travel companions would sooner spend time with you than jump off a cliff.
Posted by Aaron at 2:41 PM