One of the first things I did in preparation for our return to the states was to check whether or not Mika was going to be on tour and if he would be passing through DC.  He was in fact on tour....he just wasn't coming to DC.  Sad face.  Then, something wonderful happened in February (possibly me just misreading the tour schedule before) and he WAS coming to DC after all!  Squee!  It was to be a limited engagement taking place at DC's Sixth & I Historic Synagogue.  Only 500 tickets were going to be available for the April 10th concert event that was being billed as "An Intimate Evening."  TJ and I camped out at our computers waiting for the on-sale time, and our efforts were rewarded handsomely.  (One perk of Judaism?  TJ had signed up for the synagogue's mailing list...the only bit of advertising that we ever saw for this show.)


An excruciatingly slow two months later we found ourselves standing in a line 100 people deep an hour before the doors were expected to open.  General Admission was the name of the game, and we didn't want to be stuck in the back row.  Wednesday was I guess what you could call the first real day of spring here in DC after an extended winter filled with ice, slush, snow and overall miserably cold days.  Unfortunately, it felt more like an oppressively hot summer day.  Wanting good seats but worrying about dying of heat stroke before making it past the front door if we camped out all day, we instead opted for a late lunch at the DC Hard Rock Cafe (one of my biggest guilty pleasures) followed by an afternoon basking in the shade of the DC Cherry Blossoms, which had just bloomed.

Arriving an hour ahead turned out to be pretty good timing, as the remaining 400 or so people arrived shortly thereafter.  I was still slightly concerned that we wouldn't get premium seating, but that was for naught.  When the doors opened, we happily plopped ourselves down in the fifth row.  Boredom during the time between sitting and the start of the show is always a concern, but that fear was abated following the discovery of the wine cart.  An easy breezy hour later we were enjoying the opening act, which consisted of two DJ's spinning short 10-15 second snippets of pop music from all periods....though Disney's "Kiss the Girl" got extended play when everyone began whooping and singing along.  Why, yes, it was a room full of gay men and their hags.  Why do you ask? 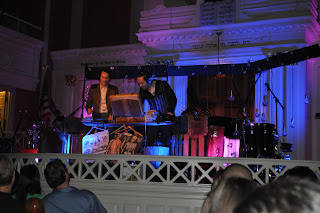 The opening act ended and I had just enough time to run to the restroom and refill our wine glasses (at the bar, not in the restroom, in case that needed clarification) before completely missing Mika's entrance, which TJ says came from the back of the room.  Sigh.  At least I didn't miss all of the opening song.  It truly was an intimate evening, the type of event that can only be experienced in a room as small as a synagogue's sanctuary.  We were sitting directly under the dome, which is prime real estate for getting the best sound, a fact that anyone who has heard the Voices of Liberty perform at EPCOT can attest to.  It was a pretty dome, to boot!

It was an evening of hits, featuring the best from all three of Mika's studio albums. 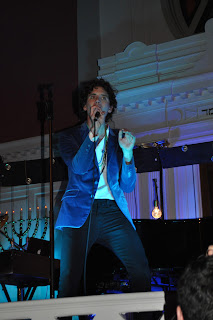 I was quite pleased with the set list and can't really think of anything I'd have preferred hearing over what we got.  There were a number of evening highlights, told in both song and story, but the ones that I will never forget are as follows:

"Blue Eyes" is one of my favorite songs, because I am vain and have blue eyes and naturally think it is a song about me.  I was already smiling, but hearing him sing this song live brought a glimmer of a tear to my (blue) eyes that accompanied my smile for the remainder of the show.

Mika stumbled over the chorus to "Emily," a song that is sung in both English and French on the album The Origin of Love.  He shook his head and said "I always f--k that one up.  I want to sing in French when I should be singing in English.  Do you want me to sing in French?!?"  The crowed of course cheered their approval and he happily obliged.  He transitioned back into English for chorus, and when he called out "Dance with me Emily," every tukus in the house left its seat, never to return again.

He later explained to the crowd that he had been wanting to perform "The Origin of Love" in a place just like this since the moment he recorded it.  You'd really just have to listen to the song to understand why he was right, and why it was so special to hear in a house of worship.

Toward the end of "Happy Ending," he stepped away from the microphone and sang unplugged.  It 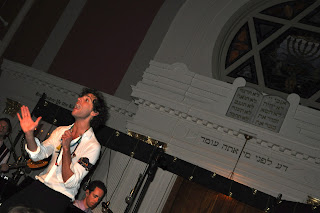 was met with great applause and I guess the acoustics in the synagogue were better than he had anticipated, for he sang "Lola" and "Stardust" in the same manner.  The silence from the crowd was a testament to the beauty of his voice, and we have confirmed with others that have attended prior shows that he does not do this as a normal part of the act.  I've never attended a concert in which the performer was able to connect with his audience so successfully at this level.

In a moment that was to become the emotional crux of the concert, he introduced "Relax, Take it Easy" by explaining that it was inspired by the 2005 bombing of the  London train system.  He had been traveling on the tube at the time and his train was evacuated.  He said he wrote the song as a means of coming to terms with the tragedy.  It was horrifying to learn that a song I had thought to merely be a metaphor for a doomed relationship was actually a coping mechanism for a terrorist attack.  I turned to see tears streaming down TJs face, and I knew that we had both made the connection between this and the act of terrorism that had taken the life of his colleague in Afghanistan last Saturday.

The songs that followed touched on themes such as love, loss and recovery.  If "Relax, Take it Easy" stirred feelings for a fallen peer, the remainder of the show definitely drew a line under our own mortality. 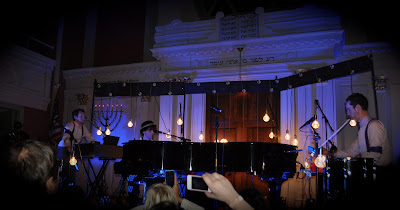 As we left the sanctuary, happier yet strangely more distressed than we had entered into it, TJ commented that this evening had the three ingredients to a perfect concert experience:  There was wine, we had great seats, and we knew all of the songs.  I would argue that there was also a fourth key ingredient:  the ability to create an emotional response.  And Mika did that in spades.

I may as well never see another concert again because, after Wednesday night, they will all be complete and utter disappointments.
Posted by Aaron at 5:16 PM 1 comment:

A Life Too Short 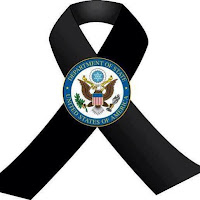 The State Department mourns the loss of one of its own today. Anne Smedinghoff joined the Foreign Service three years ago at the bright young age of 22. Her entire life was ahead of her.
She was in my husband's training class. They and their colleagues spent several months together studying languages and learning how to be diplomats so that they could spread to the four corners of the world and try to make this a better sphere on which to live. She died while trying to do just that.
I am sad to say that I only knew her in passing. This is truly my loss, as by all accounts she was a kind, brilliant, beautiful young woman.
My thoughts and prayers are with her family and friends this evening....and with all Foreign Service families that make great personal sacrifice that is so often misunderstood or unappreciated just to serve their country.
Posted by Aaron at 11:22 PM No comments: