Back in the Saddle

Wow.  All I can say is...wow.  I have never been so tired in my entire life, and all I do is sit in a classroom all day.

I had NO idea that language training would be so exhausting.  Or that transitioning between posts could be so frustrating.

The government will graciously pay to ship your car to your next post for you, free of charge.  Or to Washington, DC so that you can have it with you during your training.  But they won't do both.  What this means is that at some point, should you choose to bring your car along for every step of the journey, you will be responsible for a fairly large shipping bill.  That's where a posting in Mexico or Canada is so helpful:  your vehicle can be driven across the border.   Of course, that's slightly more difficult in Mexico, where drug violence has resulted in a ban on driving across large swaths of the country.

And so it was that on the evening of Sunday, October 21st we said farewell to our Jeep Compass, our pets and whatever belongings we could shove into the car and watched as they all disappeared into the evening darkness, piloted by a man we had never met before.  In order to avoid shipping fees we entrusted them all to the brother of the previous ACS chief's boyfriend, who was to meet us at the Nuevo Laredo airport the following afternoon.  As we went to sleep that evening, thoughts of never again seeing our car, in which we had just invested $3,500 in unexpected last-minute repairs, danced through our minds.  Oh, yeah.  The animals, too.  But mainly the car...

Everything went as planned and we were ecstatic to arrive in Nuevo Laredo early Monday afternoon to find that no animal had used the backseat as its own private bathroom during the course of the overnight, eleven-hour drive.  Whether he was kind enough to stop and walk them, I can't say...though given that he still had all ten fingers and none of them had run off into the desert, I'll hazard a guess and say that didn't happen.  Either way, this plan saved us from a headache like the one we experienced importing our pets INTO Mexico.

After dropping the driver off at the bus station, waiting in line at the border for thirty minutes to return the Jeep's import permit, waiting another twenty minutes to cross the actual border, and then spending twenty minutes at the Laredo, TX DMV to get a temporary vehicle registration for the state of Texas so that we'd be street legal (Yes, only twenty minutes at the DMV, can I get an 'Amen'?) we were ready to begin the thirteen hour trek to Pensacola, FL, where we would renew our Florida vehicle registration.  Gotta maintain that Florida residency, y'know?

We spent Monday night in San Antonio, made it to Pensacola the next evening and then, following another short trip to the DMV (Seriously, did they improve their efficiencies or what?!?!), set our sights on Atlanta, where we stopped to rest and have a short visit with our friend David Z.  David is a friend from Orlando who, after changing his name to DZ set off on a quest for lyric-writing stardom that has seen him travel to NYC, LA and now Atlanta.  He's had many adventures along the way and appears poised to finally have his dreams come true.  I wish him well.  But this is my story, so we're moving along.

After our evening in Atlanta we made our way to Williamsburg, VA, where we set up camp for the next two evenings.  We're theme park people.  We're also Halloween-at-theme-parks people.  With that in mind, TJ pushed us through lengthy travel hours early in the trip so that we would arrive in Williamsburg in time to spend a full day at Busch Gardens Williamsburg, and a night at their Howl-O-Scream event.  The rides were fun, but the haunted houses were kinda...well...I wouldn't say they were bad, per se...just that the ones at Universal Orlando, Busch Gardens Tampa Bay, and Kings Dominion are much, MUCH better.  I did get to meet Cookie Monster, which was pretty awesome. 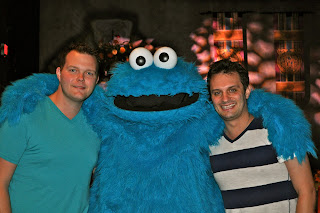 Saturday, October 27th found us finally rolling into Oakwood Falls Church, the corporate housing community that was our home for nine months in 2010 during TJ's A-100 and subsequent Spanish and Consular training, and will be our home again for the nine months of his Arabic and Economics training.  I wasn't too thrilled with Oakwood last time.  I think we both almost cried when we first laid eyes on it, and I distinctly remember TJ avoiding direct eye contact for fear that it would start a fight.  Throughout the course of our previous stay we were subjected to limited parking spaces, unsightly clutter in our hallway and on the community grounds, and lots of loud construction noises.  That was all due to a large wave of home renovations that the property was undergoing at the time, and I must say that it has paid off.  We have been here for a month and are thoroughly enjoying the new Oakwood.  I still wish it was closer to DC, but with pets there's not a lot we can do about that.  Plus, it's close to The Foreign Service Institute, where we spend most of our time anyway.  But let's not get ahead of ourselves.

We arrived with just enough time to unload the car, meet our friend Jhonny for lunch, and start unpacking before it was time to start thinking about stocking up on provisions.  You see, Hurricane Sandy had decided to come to town that weekend, too.  Anyone that knew us at the time joked that we brought "Snowmaggedon" with us last time, and a hurricane this time.  Writing this, I am reminded of my dear friend Bernard the Snowman, who kept me company during my first few days working at home the last time around.  I'll be with TJ at FSI this time, but I smell snow on the horizon...I think Bernard will be making a comeback very soon.

As more information is gathered about the storm, we are learning that her impact on the region was more devastating than that of Hurricane Katrina on New Orleans back in 2005.  At the time all we really knew was that it pushed our Arabic classes start date from Monday, October 29th to Thursday, November 1st.  We were fortunate enough to maintain all utilities throughout the storm and to face no traffic obstructions in the aftermath, a lucky streak that has been with us since our days in Central Florida facing that region's vicious hurricane seasons.

When access to FSI was finally granted, new problems arose.  Through a payroll error either in Guadalajara, Mexico City or Washington, my final paycheck did not drop.  I should have received it on November 2nd; I finally got paid on Friday, November 30th.  I've heard from other EFMs that have served at other posts that they've had issues getting paid properly as well, so going forward I'll just assume that EFM abuse is an unacceptable yet unavoidable par for the course. 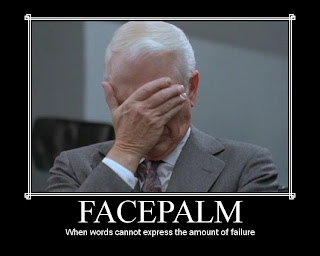 TJ faced his own pay drama when it was determined that our second night in Williamsburg would not be covered under his travel reimbursement because we had not actually travelled anywhere.  He had previously been told that it didn't matter how much we travelled on a given day so long as we departed post when instructed and arrived for training when scheduled.  The new instruction says "Well, yeah, okay...but you have to travel a little."  Right.  Anyway, per diems and travel reimbursements take forever to receive, so we're still waiting on what we will be receiving.  My final paycheck was nice to finally obtain, but it was sad knowing that my portion of the income will be missing for the foreseeable future.  Upside of being an EFM:  Free language studies/  Downside of being an EFM:  Your job disappears when your partner/spouse leaves post.

Oh, we also found out last week that the tenants living in our house are moving out at the end of December.  Hah.

Somewhere along the way, we hit the campaign trail in support of our favorite presidential candidate, finding ourselves only slightly disappointed when she lost...

...then settled in for our favorite holiday feast.  Thanksgiving was a quiet affair, just the two of us and our friend Joey, who brought a lovely arrangement of bread stuffed inside a homemade cornucopia.  I'm ashamed to say the only photo I took was of the food...and that I still haven't managed to master the art of food photography.  We spent that evening at The Kennedy Center, watching American Idol runner-up Constantine Maroulis and gay icon Deborah Cox tear up the stage in Jekyll & Hyde.  The performances were amazing, but that doesn't save the show from a lack of coherent plot.  The critics seem to agree.

Learning a language as a full time job is exhausting.  My two month "let's-learn-how-to-go-to-Wal-Mart"  course toward the end of our last stay in the area was a cakewalk compared to this.  I now understand why TJ used to come home from work exhausted and lacking the desire to do anything but nap, watch television over dinner, and go back to bed.  I used to give him such a hard time, and now I can but apologize for being an unsympathetic jerk.

We start our second month of Arabic tomorrow morning.  We've pretty much got the alphabet and basic pronunciation down, along with several key words and phrases.  We're not even close to being able to have a decent conversation.  I never managed to obtain fluency in Spanish, but I'm able to communicate effectively.  And, one month into Arabic, I sure feel like I'm fluent in Spanish.  Woof.

We've seen a lot of recently released movies and chowed down on the foods we couldn't find in Guadalajara.  We've wandered out on the weekends and made a couple of new friends.  But nothing "new" has happened since we've been back.  Until today.

Today we managed to muster up the energy to accompany some friends from Guadalajara on an adventure to Mt. Vernon.  It was a lot of fun and I can't wait to tell you about it.  BUUUUTTTTT, it's the first truly new thing we've done since arriving, so that will get its very own post within the next few days...if I can manage to stay awake after class, that is.
Posted by Aaron at 7:25 PM