José Clemente Orozco (1883-1949) was a Mexican social realist painter.  Along with fellow artists Diego Rivera and David Alfaro Siqueiros, Orozco helped to establish the Mexican Mural Renaissance, a 1920s movement that saw artwork filled with social and political messages in an attempt to reunify the country under the post Mexican Revolution government.  Orozco was fascinated by the idea of human suffering, a theme that flows through his various works.  His art is on display in Mexico City's Carrillo Gil Museum and Escuela Nacional Preparatoria, as well as the Orozco Museum in Guadalajara, itself the subject of an upcoming Top 20 post.  Today we will be discussing three other locations in the city that boast Orozco murals of their own.  I had the pleasure of viewing my first Orozco mural during my initial visit to Instituto Cultural Cabañas in February 2011.  A series of 57 frescoes adorn the walls and ceiling in the chapel of this one-time hospital, the most famous being El Hombre de Fuego (The Man of Fire), which adorns the interior of the dome.  The piece, considered to be Orozco's greatest achievement, features a central figure engulfed in flames rising above monochromatic figures that represent the natural elements (earth, wind, and water).  It is said to be a metaphor for social struggle. 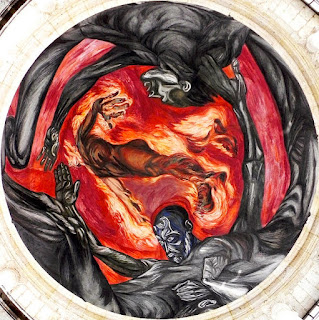 The surrounding walls feature chronological depictions of pre-Columbian Mexico, the Conversion, the Conquest, the Revolution, and the Resolution.

My second opportunity to view an Orozco mural was during the first or several visits to Guadalajara's Palacio de Gobierno, also in 2011.  The first mural, titled Lucha Social (Social Struggle) is located on the walls and ceiling just above the main staircase, and depicts Father Hidalgo brandishing a torch and waving off dark, shadowy figures that represent slavery and oppression.  Another mural, The People and its Leaders, is located in the State Congress chamber on the second floor and features Hidalgo signing the decree to abolish slavery in Mexico.  Benito Juarez can be seen below, signing the reform laws.

I did not have the pleasure of visiting the scene of the third Orozco mural until this afternoon, when I visited the Paraninfo (auditorium) of the University of Guadalajara.  Well, that's not exactly true; I spent three evening in this building over the summer, supporting a film festival TJ hosted for LGBT Pride Month, without even realizing the murals were a couple of doors down the hall.  Goes to show that there's no telling what wonders lie just around the corner.  Be ever vigilant, world travelers!

The first picture is of El hombre creador y rebelde (The Man Creator and Rebel), which is painted inside the auditorium's dome.  El pueblo y sus falsos líderes (The People and Their False Leaders) fills the top half of the wall behind the lecture stage. 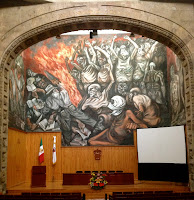 I can only hope that these photos do the art enough justice that you can appreciate them and I can personally look back on them in the years to come and remember the emotions they invoke now.  Whether or not you understand the history and artist intent behind them is irrelevant; they are haunting.  You feel a sense that something is not right with the world, and that something must be done about it.  And they fill such large spaces that you are forced to look upon them with awe.

An Orozco painting will steal the show in any environment, and I hope my journeys take me to more of them in the years to come.

I will discuss Orozco in more detail once I have visited his museum.  For now, I leave you with an excerpt from a 1997 PBS article:

"The life of Mexican muralist José Clemente Orozco (1883-1949), a life filled with drama, adversity, and triumph, is one of the great stories of the modern era. Despite poverty, childhood rheumatic fever that damaged his heart and an explosion in his youth that cost him his left hand, Orozco persisted in his wish to become an artist. He experienced the carnage and duplicity of the Mexican Revolution, the hardship following the New York stock market crash in 1929, and rising fascism in Europe during his only trip there in 1932, and emerged with an aesthetic and moral vision unparalleled in twentieth century painting."

Wow.  If art immitates life, that was quite a well to draw inspiration from.
Posted by Aaron at 10:56 PM