Happy Birthday To Me!

Okay, okay, so my birthday was three days ago. I can't help it, I've been super busy and this is my first chance to post about it. Busy doing what, you may ask? Well, apparently, I thought 31 was a big deal, and have been officially celebrating since last Friday.
And in some ways, 31 IS a big deal to me. I certainly didn't freak out over 30. In fact, 30 was so anti-climactic that I stopped blogging for a while. Don't get me wrong, the party was lovely. The presents were amazing. I just couldn't believe how utterly underwhelmed I was by the alleged milestone that is the big 3-0.
And so I am quite happy to say that 31 caused quite the visceral reaction...a panic attack that lasted for a week and a half. You see, last month it suddenly occurred to me that 31 would mean I am officially closer to 40 than I am to 20. TJ, ever helpful, was kind enough to point out that this has technically been true since the day after last year's birthday, but that didn't matter to me. What mattered was the actual number. And frankly, I found 31 to be a lot scarier than 30.
Fortunately, my short attention span prevailed and I got over myself before I went out and bought a Ferrari or got some sort of unpleasant body piercing.
There's nothing all that insightful to say about 31, but I've learned from last year, so I'm not going to go on a blog strike or anything. Instead, I'll just say that I hope to be fortunate enough to have another 31 wonderful years. Well, I'd actually like 62 more, but you catch my drift.
This has truly been a remarkable birthday. I hosted a well-attended happy hour and dinner with friends from work (Thanks, everyone, for not getting too annoyed by my indecisiveness on when and where to go). I got serenaded by a Mariachi band. Mom and dad sent a truckload of goodies. I sent myself some goodies (Thank you, Amazon.com!). TJ and I tried some new restaurants and discovered our new favorite mall. We hit the clubs with some local friends. My co-workers showered me with red velvet cake and song. And that's what I will leave you with tonight. Song, not cake. I don't know how to share cake on-line.
Without further ado, the Mexican birthday song, Las Mañanitas. It's a fun, happy song. Unless your coworkers insist on singing it every time they make visual contact with you...which they did.
Posted by Aaron at 12:48 AM No comments: 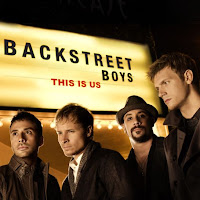 Barely two week had passed since TJ and I dragged our sick carcasses to Auditorio Telmex to see an even sicker Enrique Iglesias, and yet last night we found ourselves returning there to watch the Backstreet Boys in one of the final performances of their "This Is Us" world tour.
We weren't sick this time. Fortunately, neither were the boys, and they sang and danced their hearts out to a nearly sold out crowd.
But this was not our first experience with the BSB.
On September 17, 2004 the Backstreet Boys and Boyz II Men performed a benefit concert to raise money for the Red Cross Hurricane Relief Fund at the House of Blues in Orlando. Brooke Hogan was the opening act. She was sporting red hair extensions that looked horrendous and weren't glued in very well. But the two boy bands were amazing...and complete. In June 2006, Kevin Richardson left the BSB to pursue other interests. If not for that ridiculously active hurricane season in Central Florida, we would have never seen the band perform as a complete unit. Thanks, Mother Nature!
Alas, the remaining BSB have gone on to record two respectably successful albums, and Kevin was never heard from again. Kind of like when Wil Wheaton left Star Trek: The Next Generation. 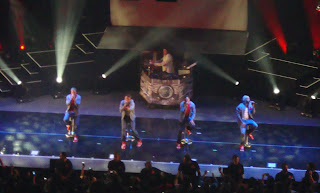 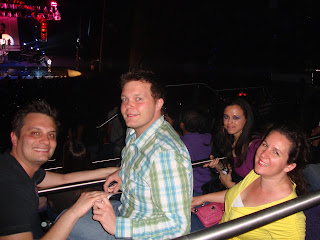 Joining us for our second BSB encounter were several friends and coworkers, two of whom are pictured here...and all of whom were completely horrified when Brian Littrell made the observation that the "boys" had been together for 18 years. "Eighteen years? Oh my god! I was barely a teenager then!" was the type of thought that ran through our aging heads at that very moment. Notice the look of shock on my face. Yes. We will call it that, instead of just a goofy grin.
But watching the concert, and seeing that they are still willing and able to get out there and shake their moneymakers regardless of their increasing age is more a reminder of how great life is than it is of how horrible those new wrinkles and gray hairs are.
I have to wonder, though, if that's a fair comparison. I mean, yes, my life is far better now than it was 18 years ago. Hell, 18 months ago. But unlike the BSB, I'm not now, nor have I ever been, nor am I likely ever to be, a multi-millionaire or a teen idol.
...and don't get me wrong. Those wrinkles and gray hairs suck. 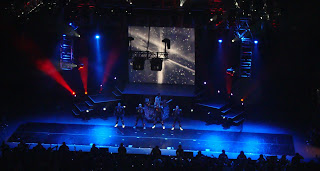 BSB...still Larger than Life
Guadalajara is the fifth-to-last stop on a tour that has spanned over 120 performances, 5 continents, and 1.5 years.
The boys must be tired, but they can't rest yet. They are about to embark on a multi-city tour with the New Kids on the Block, aptly called NKOTBSB.
Will it come to Mexico? Time will tell!
In the meantime, enjoy a small sample of last night's festivities.
Posted by Aaron at 7:31 PM No comments: 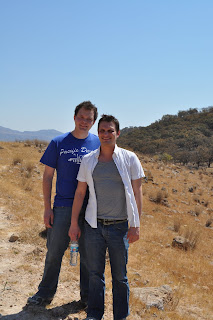 This past Saturday we had the immense pleasure of being invited by some of our colleagues to accompany them on a "great outdoors" adventure with some locals they had met the week before.
The backdrop for this adventure was a small town called Huaxtla, which is located in Zapopan, one of Guadalajara's seven municipalities. According to the limited information I could find online, Huaxtla has a modest population of approximately 135.
The day's itinerary was to consist of a hiking expedition on a local ranch, followed by a cook-out and a bit of swimming in the hot springs.
After three or four wrong turns, in which we began to doubt our hosts' knowledge of the area, we arrived at our first destination, only to discover that the ranch was closed.
As it turns out, this was perfectly fine. After 15-20 minutes of hiking in the vicinity of the ranch, we all decided it was too hot, thank you very much, and that we were all reasonably inclined to move on to the water portion of the day.

I managed to snap a few shots before our
faux heat strokes set in...
Given how hot the weather is at this time of year (and, oh goodness, it's only going to get worse), and how dry the landscape has become, we were a bit horrified when the road signs indicated that we were approaching the springs...and suddenly came across this... 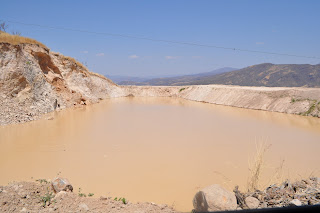 Overcoming our momentary fear and letting reason dictate that this was merely a retention pond of sorts (though why there were tortillas floating in it, we may never know), we sojourned forward and eventually came across this... 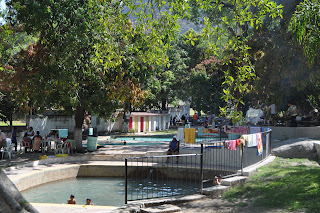 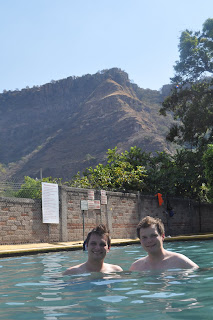 Balneario Huaxtla is literally a secret island of happiness hidden in one of the most desolate places I have ever seen. If that sounds harsh, just remember the population fact from earlier. We were in the mountains. It was hot. It was dry. There were maybe 135 people up in them thar hills.
Actually, there probably weren't. They were all here. There were several pools, all at varying degrees of temperature (depending on proximity to water source) and depth (depending on where the ground was), and they were all full of happy families seeking a reprieve from the heat.
And can we just take a minute to appreciate that view from the pool? It's just beautiful. Not the mountains, silly. I'm talking about us.
Posted by Aaron at 7:27 PM No comments:

Some Things Just Shouldn't Be Experienced With Your Coworkers

Our Foreign Service motto from day one has been "Hey, if we're living overseas, why spend all of our time with Americans?" To our credit, we have developed a fairly decent social network based on this philosophy. While we are on friendly terms with the other officers, and do attend functions both private and consular related, most of our personal time is spent with our local friends.
But...maybe this is to our detriment. Or maybe not. I'm not sure, but I do know that we've developed a reputation at the Consulate as "Aaron & TJ: They're probably busy." Apparently, our ability to befriend the locals is admired, but also has the unintended consequence of making us look, at best, unavailable, and at worst, disinterested. This definitely isn't the message we wish to convey, and it was with this in mind that we invited several coworkers to join us for the 5:25 viewing of "The Black Swan" after work today.
Surely there could be no harm in this, right? It was a popular movie this year. Natalie Portman won an Oscar for it. Why, she even got raving reviews from Mike Huckabee. Well, he raved, anyway. But other than the critical acclaim, we weren't very familiar with the movie. Living in Mexico does, unfortunately, cause one to be a little behind on American pop culture.
And so, there we were, the two of us, two other FSOs (Foreign Service Officers) one MOH (Member of Household), and an LES (Locally Employed Staff). We had our popcorn. We had our nachos. We had our sodas. We had four Consulate-affiliated friends beside us, proving that we aren't always busy, and we are interested. This was going to be the start of something great. 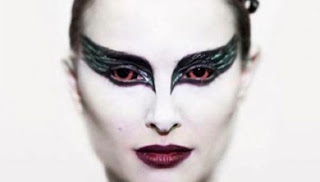 And then we sat through 108 minutes of Natalie Portman alternating between either going insane or doing things to herself and having things done to her that should have relegated this flick to a minimum rating of NC-17.
Everyone left the theater feeling a bit awkward and I must admit that, although I enjoyed the company immensely, I do have to consider the possibility that we may have been better off hanging out with our local friends tonight.
Next time will be a Disney flick, guys! I promise!
Posted by Aaron at 9:20 PM 1 comment: