I returned from a week of fun and excitement in San Diego yesterday afternoon...with a brand new Macbook in tow. What this means is that I can finally resume blogging! And as much as I would love to share my California adventures with all of you RIGHT NOW, I feel that I must continue this blog chronologically, and so we now return to Mexico City before any more of its vividness is lost forever.
This is Mexico City, Day 5. And although I write this on July 27, these experiences occurred on May 19th. Yes, we are that far behind. Sigh. 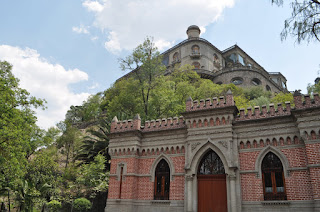 Day five saw us venturing into El Bosque de Chapultepec, or Chapultepec Park. Measuring in at a whopping 686 hectares (1695 acres), it is the largest city park in Latin America. For anyone that is curious, New York City's Central Park is only 843 acres.
Prior to Spain's occupation of Mexico, the park was something of a retreat for Aztec rulers. Chapultepec Castle was erected during colonial times and holds the honor of being the only Royal Castle on the American Continent. Emperor Maximilian I resided here during the Second Mexican Empire, which also makes this the only Royal Castle in North America that was used to house sovereigns. But that isn't what makes this location so important. 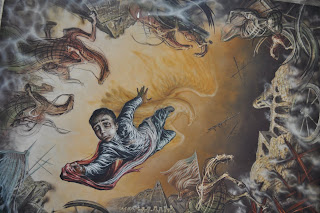 On September 13, 1847, los Niños Héroes ("Boy Heroes") died while defending the castle from US forces during the Battle of Chapultepec (Mexican-American War). The castle served as the national military academy at the time of the attack. Although Santa Ana allowed the boys to retreat, many stayed behind to defend their home. One boy, Juan Escutia, is said to have wrapped himself in a Mexican flag and thrown himself from the building in lieu of surrendering. A mural painted on the ceiling above a stairwell in the main entrance of the castle honors them. 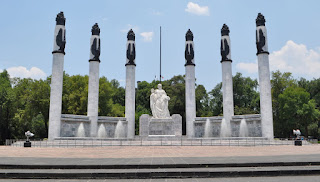 A statue situated at the east entrance of the park, Monumento a los Niños Héroes, contains six columns, each of which represents a child that died during the battle. They are:
September 13th is a national celebration known as "Dia de Los Niños Heroes de Chapultepec."
The castle became the Museo Nacional de Historia under a 1939 decree by President Lázaro Cárdenas.
In its current capacity, the castle acts as a palacial museum, playing host to many stereotypical palacial museum-type things, including:

...fancy courtyards, and fancy stained glass windows
I've had the pleasure of visiting similar locations in the past, but this was by far one of the most expansive and well preserved/cared for. I'd go so far as to call it the Versailles of Mexico.
And, as such, visitors should take care to respect their surroundings. So, please... 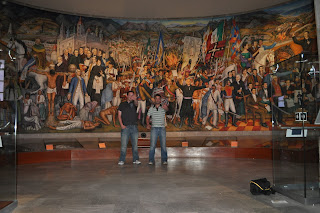 ...always remember to have your friend turn the flash off before he pushes the button...