As I mentioned in Homeward Bound: The Incredibly Ridiculous Journey, we are having difficulty getting authorization from Wells Fargo to ship my Jeep to Guadalajara. Unfortunately, the saga continues.
Last week we made the decision that the best solution would be to refinance through USAA. This would allow us to add TJ to the title, thus removing the concern of the car not being in his name, and provide us with a title company that would be willing to provide a letter of consent to export the vehicle.
USAA cut a check and overnighted it to Wells Fargo. Wells Fargo assured me that, since the title is an e-title, it would be transferred immediately.
I called Wells Fargo today, only to find out that even though the payment was received on October 5, they would hold the title until October 21 to ensure that...payment...was...received?
Yeah. So I asked how I could expedite the process. I was told that I could have USAA fax a copy of the cashed check to them. A fax number was provided. I called USAA and was told this would be taken care of ASAP. This was at 2:30.
At 4:30 I called Wells Fargo back to follow up, and was advised that their auto-fax system requires a 24-48 hour turnaround, and then it will be another 24-48 hours before they can release the title. So one day became four. I asked if Wells Fargo could, at the very least, check to see if the fax was received. They told me they could not, as I did not have the fax number from which USAA transmitted the requested information. I asked the representative if she could contact USAA on my behalf and she said no. When I asked why not, she told me that she is an inbound representative and cannot make outbound calls. I told her that I was sure she could, to which she responded "yes...but I won't." I hope she develops a rash. Needless to say, I asked for a supervisor.
Her name was Geneva and she told me that since ALL of their customers are valued, she could not give me special treatment. I hope she develops a rash, too.
I called USAA and spoke with a lovely woman who somehow managed to keep me on the phone for over an hour but was able to answer most of my questions. She was nice enough to call Wells Fargo for me, confirmed that the fax number that Wells Fargo had given me earlier in the day was incorrect (shocker) and managed to get the fax sent to the correct place.
Oh, and she learned that the turnaround for title release is 96 hours, not 24-48.
Sigh.
On the bright side, I discovered an awesome website today that allows you to create your own Demotivational Posters. 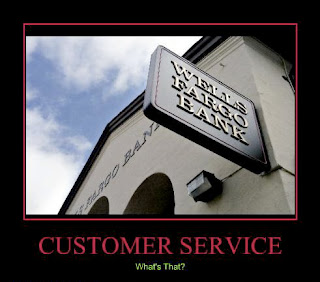