Being in DC has been an...interesting experience so far. I spent the first 23 years of my life living in Central Texas, and during that time, I only saw a significant amount of snow once. I was five years old, and the snow fell overnight. I woke up and there was a thick layer of white on the ground. I remember a snowman, but don't recall whether or not I had a hand in his creation, or if it was just something my father made for me. I spent Thanksgiving 2002 in Boston, MA. There was a very light snow that preceded my arrival, and, prior to meeting up with a friend for a Blue Man Group show, I managed to cobble up a 12 inch snow/mud monster. Not very attractive, but there wasn't much snow to work with.
The last seven years of my life have been spent in Orlando, and again little-to-no snow. During a business trip to Mason, OH in late 2009, I did see the tiniest bit of snow, this time not even enough to make a snow/mud monster.
So, here I am. February 2010, and up to my knees (literally) in snow. On Day one, TJ and I took a leisurely stroll around the White House and Washington Monument. Beautiful structures in their own right, made even more beautiful by the white powder threatening to overtake them. After taking a few photos, I thought it might be fun to actually build a snowman. With knee-deep snow, I only managed a basketball-sized bottom layer before deciding to throw it at TJ instead. Thus a snowball fight ensued. It was not to last very long. TJ is brutal and apparently quite adept at the hit and run strategy.
Afterwards, we abandoned such frivolous pursuits in favor of some culture, and spent the afternoon at the United States Holocaust Memorial Museum. Over the next several days, we were kept busy by the arts, catching a showing of "Disney On Ice" at DC's Verizon Center and "Sweeney Todd" at Arlington's Signature Theatre. Between these adventures, and settling in after the move, thoughts of snowmen soon disappeared. And yet... 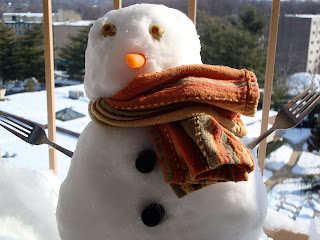 Today, a little after 11am, Bernard the Snowman, who lives on my balcony, was born.

Email ThisBlogThis!Share to TwitterShare to FacebookShare to Pinterest
Labels: Snow