So what happens when a family makes the decision to join the Foreign Service? Initially, two things happen (well, three, if you count uprooting and moving to Virginia/Washington, DC).
The first thing that happens is that the new officers attend A-100.
The second thing is that the officers and their family members anxiously await Flag Day.
A-100 is the name given to the orientation training class for new FSO's. Taught at the Foreign Service Institute in Arlington, Virginia, A-100 is where FSO's receive "the basics" prior to branching off into specialized training for their different career tracks, geographic specialties, and language requirements.
Flag Day is a special event that occurs on the fourth Friday of this five-week course. Flag Day gets its name for the simple fact that the FSO's are presented with a small flag of the country to which they have been assigned for their first post.
This one hour event is a harrowing experience. Officers and their wives/husbands/partners/children gather in a small auditorium with their peers, eager to learn whether or not their voices have been heard. Did the week of research that went into the bid list submission amount to anything, or was it all for naught? 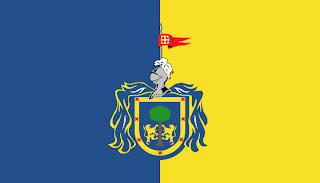 TJ and I were very fortunate in two regards: His name was called relatively early, sparing us the agony of anticipation; and we were assigned to a post that we had bid at the top of our list.
Guadalajara, located in the Mexican state of Jalisco (flag pictured above), meets our needs: There are no pet import restrictions. Learning Spanish will allow TJ the opportunity to fulfill his language requirement for earning tenure. The city has a large GLBT community, which meets our preference for a diverse environment.
Those that read my previous post may remember my concern about not knowing enough about the posts to recognize whether I should be happy or sad when the time came. Let me tell you now how happy I was when TJ's name was called for Guadalajara. It's close to Texas, which is important to my parents. US travel will be easy. Despite the dangers in parts of Mexico, Guadalajara has managed to avoid bad press (at least for now). Most important of all, TJ looked overjoyed as he ran for the stage.
He's going to be an amazing diplomat. It wasn't until hours later that he confided that he knew next to nothing about Guadalajara at the time, and was just "putting on appearances."
We have since done a bit of research. The city is beautiful. The housing is spacious and modern. Many of the American food and shopping venues we love will be available to us. The nightlife looks amazing...OK, so initial research was a little shallow. We don't leave until November. We'll have all of this figured out by then.