The last two weeks have been...interesting. I kid you not....the VERY afternoon that I posted about loving our new, albeit temporary home, TJ called to let me know that we would be moving to our NEW-new, albeit still temporary home...the next morning. The message contained both good and bad news, because as we all know, you can't have one without having a healthy dose of the other. 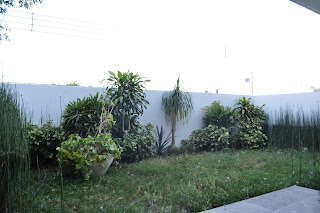 Bad News: Well, duh, I'd have to box up our stuff and move in the morning while TJ was at work.

Good News: Despite thinking we would be moving into a housing community that was further away from both the Consulate and local shopping (a problem, as our car has not arrived yet), we actually ended up moving into a unit that is not only centrally located, but also in the same community as our eventual, permanent home.

Better News: Unlike the apartment, both the new temporary home and the permanent home have small yards in which the puppies can frolick.

Worse News: The very day of the move, the free Internet at Starbucks stopped working on my computer. This posting has been sitting in limbo for over a week. Today, in what can only be called a Thanksgiving miracle, the Internet started working again.

This new community is a brisk 15-20 minute walk from our original apartment, which means it is fairly close to the places I mentioned in my previous blog. In fact, I find that our shopping habits have changed very little with the recent move.

Whereas the previous unit was an apartment, this one is a town home. It appears comparable to the apartment in both furnishings and living space, minus one or two key differences. The new unit offers an ice machine and an additional water filter (score!), and, as townhouses tend to do, features a random bathroom by the front door.

In my last post I made a point of mentioning that I had gotten over my irrational fears regarding the apartment. What I failed to mention was that, during our trip to Tequila, I had discussed these fears with one of TJ's coworkers that also happens to live in the same apartment building. Although she denied having that “someone's lurking in the closet” vibe, she did seem to feel a “presence” there. I've never been one for the supernatural, but I certainly wasn't one to judge, what with my checking all of the closets at night. 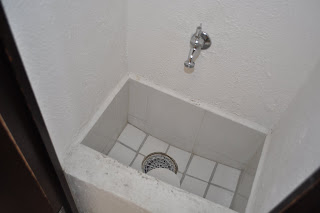 A feature of our new home: A faucet and drain
in an upstairs closet. Perfect for washing away
the evidence of a bloody home invasion?

Whatever was giving me the heebie-jeebies passed just in time for us to move into our new temporary home. This new community is gated. There is an electric fence along the perimeter. I'm not sure if that plays any part in how I feel, or if it's simply the fact that, as of yet, I have not walked in on another stranger from the Consulate checking on my security system. All I know is that, whether justified or not, I feel safer here (despite murder-faucet in the closet), and am glad to have gotten out of the apartment before my mind started to convince me that it was haunted.

But you know what? I can't say that I'm the biggest fan of the mysterious blur over the stove that showed up in every picture I took of our new kitchen.