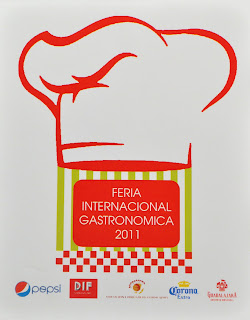 One of the greatest joys of being a diplomat, or a diplomat's spouse, is that you are able to participate in so many philanthropic events that are not only rewarding but also highly entertaining.
One of the greatest sorrows of being a diplomat, or a diplomat's spouse, is that sometimes this means your alarm clock goes off at 8AM on Sunday morning. This was one such day.
Today, SNDIF, or the Sistema Nacional para el Desarrollo Integral de la Familia, which is usually shortened to just DIF, or Desarrollo Integral de la Familia, and in English would be known as the National System for Integral Family Devlopment, unless you prefer to shorten it to just Integral Family Development, hosted the 11 Feria Internacional Gastronomica, which in English would be the 2011 International Gastronomic Fair.
See? See why you wouldn't want the alarm clock going off so early? I need a nap just typing that. Whew.
The International Gastronomic Fair is basically a low-key, low-budget version of what my beloved Floridians would know as the EPCOT International Food & Wine Festival.
I don't say low-key and low-budget as a slam against the event. Far from it. The reason that it's low-key is because it's a charity event, not the workings of a multi-billion dollar corporation. The reason that it's low-budget is that all labor and supplies are donated.
DIF is a social assistance program that operates with the mission of strengthening and developing the welfare of Mexican families, and today's event was held as a fundraiser for their ongoing programs, with 100% of today's profits going to support DIF. 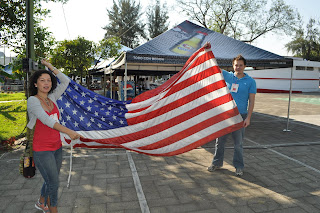 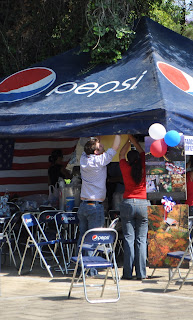 Like any good gastronomical event, there were several booths set up featuring food and drink from a number of different countries. The USCG Guadalajara volunteered to run the American booth at this year's event (hmmm...hot dogs!), and TJ and I signed up to assist with set-up and decorating. Which began at 8:45. Sooo early on a Sunday. Sigh.
(Oh! Quick plug! Although all you can see is photo after photo of Pepsi product placement, I would like to give a quick shout out to the fine people at Costco who generously donated 350 hot dogs and buns, plus an overwhelming quantity of condiments for today's event.)
The original plan, I'll admit, was to work the early shift so we could get on with our day afterward. We were only scheduled to be there for about two hours, but ended up having so much fun that we stuck around to help until 12ish. After running home for a quick power nap, we headed back to the event mid-afternoon for some serious eating. 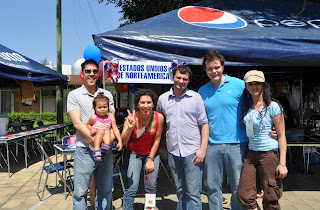 The Set-Up Crew...
Who can spot the typo?
It wasn't us! Signage provided by DIF!!!
You may be asking yourself what fares were provided by the other booths. Well! Let me tell you! 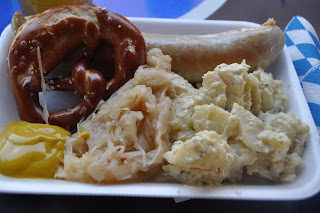 Bratwurst and Sauerkraut from Germany
Oh, Potato Salad and a Pretzel, too! 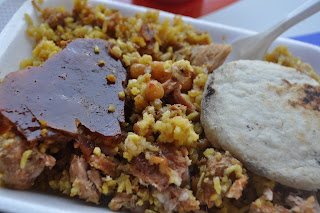 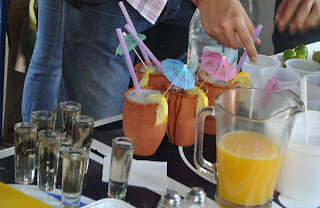 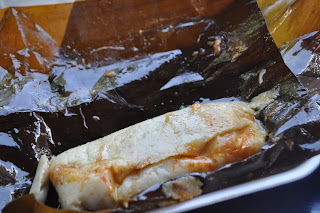 Tamales de El Salvador
Wrapped in Banana Leaves Instead of Corn Husks
There were many more booths available, offering food selections from Argentina, Chile, The Czech Republic, The Dominican Republic, Greece, Peru, Spain, Sweden, Switzerland, etc...but our poor tummies couldn't handle the pressure, and we at last had to admit defeat.
In addition to the food (which, unlike EPCOT, was served in huge portions at reasonable prices), the festival also offered several tchotchke stands as well as live musical performances representing the styles and sounds of the participating countries. 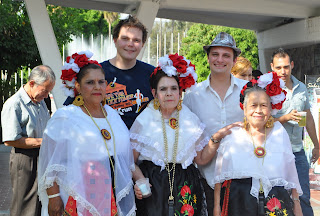 Not sure what these cute old ladies were going to do. We missed their performance. After 6 plates of food (We shared! I promise!), we had to roll ourselves home. But not before making them take a picture with us. Please note that we look happy. They do not.
Maybe they had to get up at 8AM, too.
Posted by Aaron at 3:40 PM