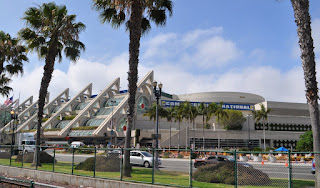 Tijuana was cool. The San Diego Zoo was fun. Disneyland (my next blog post) was better than I imagined. But this is where the meat and potatoes is, folks. THIS is why I made the trip in the first place: San Diego Comic Con International (July 21-24, 2011).

I have wanted to do this since I was 12 years old. But that just wasn't in the cards. My parents hate comics even more than they hate traveling. When I was in college, I was broke. When I was a young adult, I simply couldn't justify the cost. But this year? The time was finally right.

Unfortunately (or fortunately, depending on your outlook *cough*TJ*cough*), the right time came at a juncture in my life in which I no longer care all that much about comic books.

Fortunately (or unfortunately, depending on your outlook *cough*TJ*cough*), the right time came at a juncture in my life where He-Man and She-Ra have decided to make a massive comeback. And I'm all about enjoying me some of that. So's Jarrett, and our primary reason for attending the con was to see what sort of He-Man stuff Mattel had up their sleeves (For anyone that cares, there is a killer toyline available here).

Jarrett and I have been friends since Freshmen year at Texas A&M. Our love of comics and toys and all-things-adults-should-have-grown-out-of-by-now bonded us. Although we have lost touch off and on since our college days, for a number of unimportant reasons, we have really reconnected in the last couple of year thanks to this nerdy little hobby. Yet this was only the third time we have seen each other in the past eight years, and the first time that the reunion has lasted longer than three hours. It could have been awkward. But fortunately there was enough "shop talk" to keep us occupied. Even more fortunately, we found that we're still able to talk about normal things. But this is a Comic Con blog, so other than saying it was great to see him, it's time to get back to the business at hand.

I should be completely mortified discussing this with you. But I'm not, for three reasons: The first reason is that, since giving up comics, He-Man is my only vice. And one vice, no matter how nerdy, never hurt anyone, right? The second reason is that TJ thinks it is HILARIOUS to grab every visitor to our home, run upstairs, and show them my collection of He-Man and She-Ra figures. So, you see, I've become somewhat desensitized to the whole thing. The third reason is that I very seldom blog about anything completely nerdy, so I think you probably view me as fairly mainstream and can forgive this minor indulgence.

That said, I still don't plan on going overboard and giving you a play-by-play of He-Man toy reveals (which included a contest in which fans get the chance to create a new character, and an announcement that Mattel can finally, after 30 years, make toys of all the characters from the old cartoon). Instead, I invite you to take a look at a small sampling of the toy goodness one could have seen from a variety of companies at this year's convention. Pay special attention to the elephant, whose inclusion I teased in my previous blog post. Yes, I know. It was a very loose connection at best, but I was starving for a transitional statement... 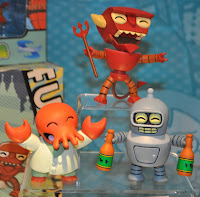 The night of the He-Man reveals, Jarrett and I found ourselves at a local bar, where we met and had a drink with the Overlord of Evil himself, Skeletor. Needing a break from his quest for the secrets of Castle Grayskull, Skeletor has apparently decided to take a tour of Earth. His first stop was San Diego... 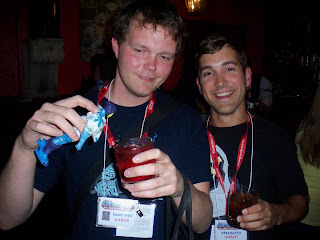 You can follow his exploits here. I'm only slightly mortified to admit that I signed up to have him come stay with me sometime soon...I'm much more mortified by the fact that I did, and Jarrett did not. His geek factor has skewed much higher than mine these past few years. But I may have just passed him with this.

Beyond our primary mission at the con, we saw and experienced lots of awesome things throughout the weekend.


I wish the next two pictures weren't so boring...because what they represent is actually quite amazing. The first photo is a Q&A with the cast of NBC's new drama, "Grimm," which followed a special viewing of the pilot episode. Not the best, but it has definite potential. The panel was hosted by Anthony Head, who played Giles on "Buffy the Vampire Slayer." It is but one example of the many celebrity appearances that accompanied movie/tv previews at the con. Sadly, it's the only one we saw...

The second picture is from the "Gays in Comics" panel, in which several gay and straight comic book professionals discussed the importance of homosexual characters in modern comic books. Of particular interest here are Robert Kirkman, creator of "The Walking Dead," and Dan Parent, creator of Riverdale's first ever gay character, Kevin Keller. I was so impressed with this presentation that I did something I haven't done in over two years: I bought a comic book. Not just one, but four. And at the Archie booth, of all places. But you know what? I want to support this. Archie comics are some of the earliest comics I remember reading. And I can't help but wonder what having a normal gay kid interacting with all of those other normal kids would have meant to me way back when. I want this to succeed.

Stepping off of the soap box... 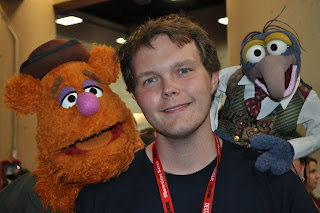 Does this awesomeness even need an explanation?

And this! Not only is this just all sorts of geektastic... 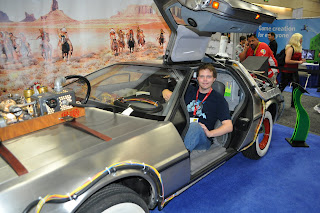 ...but the simple taking of this picture helped a great cause. The DeLorean seen here is one of the actual cars used in the filming of "Back to the Future III." A $20 donation to Team Fox, Michael J. Fox's Foundation supporting Parkinson's research, made this possible. They were really great about it, too. They took one photo, which they e-mailed to me, and then allowed me to take several pics with my own camera. The booth, hosted by Profiles in History, also featured several props from the films, including hover boards, Marty's cowboy hat, Grays Sports Almanac, and a Frisbie's Pie pan.

Voltron's apparently making a comeback. To advertise/commemorate/pimp the event, a scavenger hunt was held. If you could find all five cardboard cutouts of the Voltron lions and scan them with your QR-Code Reader (able to be downloaded from your smart phone's App Store) you would not only be entered into a sweepstakes of some sort, but you'd receive one complimentary button that corresponds with whatever lion you scanned. Apparently, everyone and their mother was trying to download the application. Standing at the Mattel booth (makers of Voltron toys), Jarrett explained that he had waited 10 minutes for the app to dowload with zero results, while I explained that I currently live in Mexico and my smart phone is nothing more than an overpriced iPod at the moment, and that I frankly didn't even know that a QR doohickey was available or how to use it because I am so pathetically out of touch and that it is sooo unfair to persecute an American citizen like this when he clearly can't help his current circumstances. And that is how we both received our Blue Lion buttons.

Cleverly deducing the location of the second lion (by asking the Mattel guy where we should go next) we proceeded to obtain the Red Lion button by utilizing the same old sob story. This tactic failed miserably with lions three, four, and five...which were all displayed in a noncreative manner side by side in front of the Hard Rock Hotel. Like, can we get a little effort here? As was to be expected, those that cared not about the challenge of a scavenger hunt also cared not for the plights of the those-unable-to-download. Not to be deterred, Jarrett hiked up his pants and pitched the mother of all hissy fits, which resulted in both of us walking away with a complete set of buttons, leaving three irritated volunteers in our wake. Boo-ya, rhymes-with-witches! And we still haven't entered your contest!

But if you don't care about Voltron, here's your "Ooh, I'm jealous" moment of the day...

Yeah, that's Chris Evans. So what If I could barely see him? I mean, how close did YOU get? Chris was on-site promoting this summer's second Marvel blockbuster, "Captain America." It was an unannounced appearance, and as such I was unable to plot and execute a proper kidnapping. Oh well. I'll always have my memories of the poorly planned event, which consisted of him standing on the Marvel stage in the middle of the freakin' sales floor, creating a cluster mug of a traffic jam which could only be handled by threats of being thrown to the curb by convention staff if we didn't put our cameras down and keep walking. Hey, here's an idea: How about holding celebrity appearances in convention halls so that you can control the flow of traffic without resorting to idle threats directed at your customers? Nah. That probably makes too much sense.
Well, it's almost time to leave the convention behind, but I think that I've saved the best for last. Anyone who knew I was going to SDCC asked if I was dressing up. I always crinkled my nose and said "Oh, God, no." And yet, having seen all of the costumed characters in person, I think that maybe one day it would be fun to dress up. Maybe for a day. Not the whole time. Those that do cannot possibly enjoy themselves, having to stop constantly to take pictures for a-holes like myself. If/when my costume day comes, I fully encourage you all to make fun of me. For now, just make fun of these crazy cats. I've been kind enough to provide Wikipedia links to all of them, in case you have no clue who they are supposed to be.

Emperial Soldiers having a clearance sale on Slave Leia's;
Link poses with somebody even I don't know...

Two Teela's, one Orko, and...
some other rare Eternian creature.

Green Lanterns can be male or female. Not so sure about Aquamen.
Thundercats, Hooooo!

Me and Marty McFly at the Mattel Booth;
Drag Queen Galactus and 1602's Captain America


And with that we must unfortunately end our magical journey through the land of the geeks. I'm as sad to stop writing about it as I was to leave the real-life experience. Just as there aren't enough words to express how overwhelmingly stressful or how overwhelmingly enjoyable the convention was, there wasn't enough time in the day to experience all of the convention goings-on. I hope to return one day. I also hope to convince TJ to come along. I truly think he would have fun. Time will tell.

But before we go, here's one final photo that, taken during my final hour at the convention on Sunday, perfectly captures how I would feel exactly 24 hours later at Disneyland. Jarrett, who had left earlier in the day to return to Texas, was kind enough to share his final entry ticket with our host, Evan. Evan and I spent a couple of hours at the con on Sunday, in which I showed him the highlights...inadvertently posing the precognitive question... 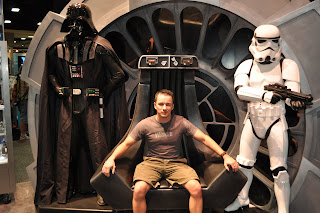 Has Evan given in to the power of...the Dark Side?
Posted by Aaron at 6:11 PM