Growing up in a small Texas town, it didn’t really matter that I wasn’t destined to be a farmer, rancher, or home economics wizard. What mattered was that many of my peers were. And so every year we would get a day off from school for a field trip to the Bell County Youth Fair & Livestock Show-Rodeo. Whether this was to support our classmates who had entered into the fair, a way to use up those useless snow days, or just so the teachers could have a break from lesson planning, I’ll never know. But it was generally fun. I do remember one moment, though, in what I believe was third grade. We had boarded the bus and were preparing for the drive home when suddenly a lesbian couple walked by, holding hands. The requisite number of hateful taunts spewed forth, most of which containing colorful language that could only have been learned from the ignorant parents waiting for us at home. I don’t remember how I reacted that day, whether I joined in uncomfortably or just sat in nervous silence. But I remember how it made me feel. Embarrassed. For the couple? For myself? For my classmates? Maybe everyone. But definitely embarrassed. 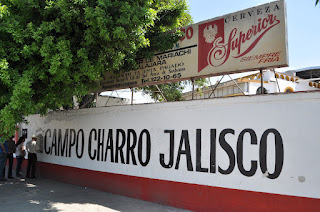 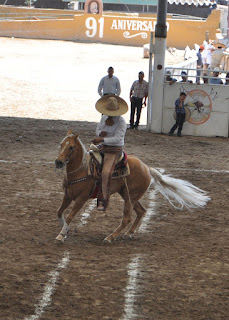 Years later I found myself attending the Houston Livestock Show & Rodeo on more than one occasion with my friend other-Aaron (dubbed thusly because he was, in fact, the other Aaron). His father had business hook-ups for the weekend concert series, so we would occasionally find ourselves moseying around the fairgrounds on a weekend afternoon and then enjoying a concert that night. It worked great. He didn’t have a car with which to make the hour+ commute, and I didn’t have concert tickets. We were a match made in heaven. During the spring of my senior year, I happened to be dating someone that lived in Houston and was working on lighting effects for the rodeo. I had not yet come out to other-Aaron, and would not for another 2-3 months. I was afraid of how he would react, given his strong Catholic background, so I awkwardly excused myself on one such rodeo afternoon to go have a quick chat with the guy during his break. Sidenote # 1 – I’ve never been what you’d call “slick,” so I was fairly sure other-Aaron knew I was up to something. Sidenote # 2- When I eventually came out to him, his response was a fairly disinterested “So what?” which was followed by “That’s why you snuck away at the rodeo, right?” Yup. I’m very clever and sneaky. There was no handholding. There were no evil 3rd Graders. But still, I felt embarrassed. Because I was hiding.
Yesterday (and nine years later, give or take) a friend of TJ’s invited us to a charreada. A charreada is a competitive sporting event similar to what we in the US would call a rodeo. A remnant of Spanish colonization , the first charreadas were competitions between haciendas, but today’s teams are often made up of extended families that have been competing for generations. This is very different from US rodeos, in which most events are an "every man for himself" kind of thing.

Other differences between the charreada and the more familiar rodeo: Trophies are more common prizes than cash awards, as charreadas are not considered to be a professional sport. Whereas rodeo competitors are judged on time-to-completion of their specific tasks, charros are scored primarily on finesse and grace. Despite amateur status, charreadas tend to hold greater prestige in Mexico than rodeos do in the United States.

The charreada itself consists of nine events:

Cala de Caballo (Reining) demonstrates the rider’s mastery of the horse rein. The horse is required to gallop, come to a sliding stop, spin on its hind legs, and then walk backwards back to the starting point.

Piales en Lienzo (Heeling) requires that the charro throw a lariat at a running horse, catching it by the hind legs.

Coleadero (Steer Tailing) is an event in which a charro rides alongside a bull, wraps its tail around his right leg, and tries to roll the bull as he rides past it.

Jineteo de Toro (Bull riding) is basically a bull riding event similar to what you would find in an American rodeo competition.

Terna en el Ruedo (Team Roping) is a team roping event in which three charros attempt to rope a bull - one by its neck, one by its hind legs, and the last then ties its feet together. 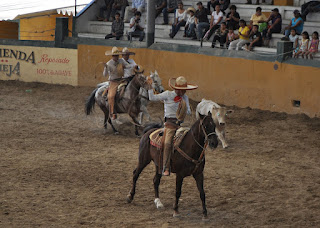 Manganas a Pie (Forefooting) finds a charro on foot being given three opportunities to rope a horse by its front legs and cause it to fall and roll once, all while the horse is being chased around the ring by three mounted charrs.

Manganas a Caballo or (Forefooting on Horseback) is basically Manganas a Pie, except everyone is on horseback. 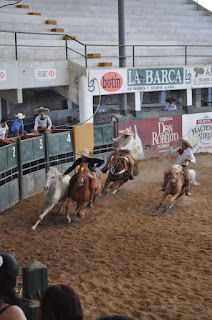 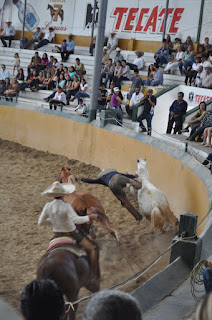 Many thanks to Wikipedia for all the info. It’s a cowboy’s world…I just live in it.
Overall, it was a fun afternoon of learning about, and experiencing, more Mexican culture. There was no handholding. There were no evil 3rd graders. But I'm, finally, far removed from the days of embarrassment. Hate speech would no longer be tolerated in silence. Not that such bravery was needed. At least not yesterday. When we arrived, a little cowboy gave TJ’s friend the “elevator eyes.” A couple of the charros looked like they could have been playing for the home team, too.
My, oh, my. The times, they are a-changin’.
Posted by Aaron at 6:00 PM