Architecture?  How vague is that?

When I hear the words "Top 20" and "Architecture," my mind can't help but leap to examples of structural superiority that have managed to work their way into my heart over the years:

The Empire State Building.  The Louvre.  Centre Pompidou.  Chichén Itzá.  That funky McDonald's in Oklahoma with the golden arches that cross an interstate highway.

So when I saw that the word "Architecture" appeared on our CLO's Top 20 list for Guadalajara, my interest soared.  And then plummeted like a duck during hunting season.

Strong in theory, this topic is sadly weak in execution...for two reasons.  One, because in a sea of historic landmarks and breathtaking cityscapes, the list only names three buildings as must-see architectural feats.  And one of them already has a separate listing (Teatro Degollado).  Two, because Santa Monica is also on the list. 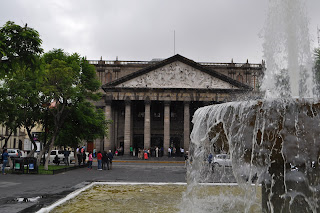 Since Teatro Degollado (which,for the record, totally deserves inclusion on a list of Guadalajara's architectural feats...it's just weird that it got listed twice) has been covered lovingly and in depth already, I will take the liberty of moving forward with my scathing review of Santa Monica.

I have attempted to visit the Church of Santa Monica (intersection of San Felipe and Santa Monica, for anybody silly enough to want to go after reading what follows) on two occasions.  Both times, I was denied entrance to the church.  The first time was because they saw my camera and wanted to ensure respect was paid to the worshippers attending services inside.  Okay, fair enough.  They at least let me peak my head in.  It looked not unlike a construction zone.  The second time, there was no service to speak of.  The lights were off and the door was closed.  The frumpy attendees at the door (there were three...there are always three) directed us to a side chapel full of similarly frumpy people that were only slighly less photogenic than the house of worship itself.  The outside is much prettier, I suppose, and I guess that's really why this mess makes the list.  Built toward the end of the 17th century, the facade features fine stonework ornamentation depicting grapes, angels, eagles, and whatnot.  A statue of St. Christopher overlooks the street., presumably to make sure nobody attempts to enter the facility.  There's also some charming graffiti decorating the doors to the larger, off-limits chapel which, thanks to rotting and splitting wood, allow for a tiny peak inside.  TJ was ready to kill me after our first waste of time visit.  After the second, he demanded promises that we won't be following any Top 20 lists at future posts.

On to lovelier things... 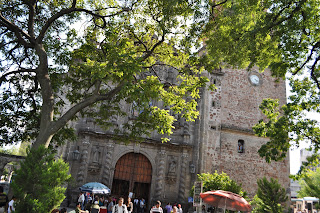 The final item on this unusual list, Templo de San Francisco de Asís (295 Calle 16 de Septiembre) is held in much higher regard.  This church was built by the Franciscans in the late 17th century and stands on the site of an earlier church and convent. Solomonic columns adorn the exterior, spiraling artfully toward the heavens.  The church is surrounded by beautiful gardens, and families can be seen comfortably lounging in them at any given time.  I have fond memories of this church from our early days in Guadalajara, as it was here that Los Gigantes rested in between sets...though I didn't connect the church's name and location until we arrived on-site this past weekend.  I was all like "Hey, I probably have pictures of this place already," and TJ was all like "Duh.  No more Top 20's!"

Well, I have six more to go, and then the Guadalajara Top 20 adventure will be over.  TJ's grudgingly agreed to go along with this until conclusion, but I'm inclined to agree that, going forward, we should make our own fun. We've seen and done so many amazing things here that were so far off that list, or any guidebook, that it really makes you question the effectiveness of such travel tools.

Teatro Degollado is a wonderful building, both on merit of it's architectural design and its role in Guadalajara's performing arts circles.  But it already had a spot in the Top 20.  To toss out its name again in a general "Architecture" slot that includes the tacky Church of Santa Monica while failing to mention the aqueduct (we'll get to that in a couple of days), the Cathedral, or even one of our impressive malls is just weird and indicative that it is far past time to update the list.