Despite being snot-deep in the middle of his second cold/flu/major-annoyance-to-me since arriving in the metro DC area in late October (darn that drastic change in weather!), TJ mustered the energy to crawl out of bed long enough for us to accompany our Guadalajara friends Craig and Jo (and their rascally son Hector), who are also stateside in preparation for their next tour with the State Department, on an excursion to historic Mount Vernon this past Sunday.

Mount Vernon was the plantation home of our nation's first president, General George Washington (1732-1799).  The estate was designated a National Historic Landmark in 1960 and is also listed on the National Register of Historic Places.

This was a much-anticipated outing for us, as our last stay in the Metro DC area didn't find us exploring much of the area beyond the District of Columbia.  Not that Mount Vernon, situated a mere 15 miles northwest of DC on the Potomac River, is what anybody could call very...beyond.

Our tour of the facilities began at the Ford Orientation Center with a brief video tour of the property hosted by TV legend Pat Sajak.  It's always fun to see D-list celebs thrown into ridiculous situations, and Sajak, dressed in period garb and pretending to be jostled in a horse and buggy, doesn't disappoint.  This was followed by We Fight to Be Free, a 2006 short film that recounts Washington's most important military achievements and his courtship with Martha Dandridge Custis, the future Mrs. Washington.  I thoroughly enjoyed the movie, but the snorts and chortles I could hear from down the aisle led me to believe that TJ, perhaps, did not.  Eight-year-old Hector was more entertained, though he did almost fall out of his chair at the onset, when the announcer revealed that the film would be 18 minutes in length.  I was right there with him.

As the crowd shuffled from the theater we made our way over to the main attraction:  The Mansion.

Oh wait.  We stopped and saw a Christmas Camel named Aladdin first.  Now, I'm still not quite sure what a Christmas Camel is, but there was a plaque that explained how Washington enjoyed seeing exotic animals and paid 18 shillings to bring a camel to Mount Vernon in 1787.  I think that's something in the ballpark of  ninety cents, making him a sucker.  The National Zoo has free admission and lots more than just camels.  Of course, that didn't open for another 102 years, but whatever.   Anyway, Aladdin will be on display until January 6th, so plan accordingly, folks.

Our next stop was the mansion, which is allegedly depicted as it was in 1799, based on an inventory conducted upon Washington's death. 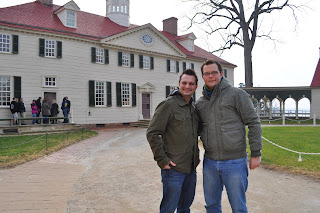 Photography is not allowed inside, which is always a sticking point for me.  How in the world am I ever supposed to remember what something looks like if I can neither take a picture of it nor be bothered to open my laptop and blog about it until three days after the fact?  I'm just going to steal a quote from the website:  "The Mansion features original furnishings, items owned by the Washington family, 18th-century objects, and a small number of reproductions.  Vibrant wall colors, reconstructed after careful paint analysis, demonstrate the Washingtons' wealth and sense of fashion."  Tour guides were stationed throughout the house, and through them we learned that the last room in the house to be finished was the dining/entertaining room, which features intricate wall art to represent Washington the farmer, not Washington the general.  We learned that Martha decorated their master bedroom, an uncommon occurrence during the period which was likely permitted because she used the space as her private office during the day.  We learned that Martha vacated the bedroom and relocated to a room in the attic upon her husband's death.  Oh!  That reminds me:  We got to tour the attic, a treat reserved for the holiday season.  Like the camel, I guess.

Surrounding the house are a variety of structures like the restrooms (both public and historic), the kitchen, the storage facilities, carriage houses and the (eek!) slaves' quarters, all set up in your standard museum/take-a-peek-at-an-authentic-room-of-the-times fashion  Two building that feature staff presentations are the Blacksmith Shop and the Greenhouse, though both were inconveniently closed for lunch as we passed through.  You'd think they would stagger breaks like at Disney World, but whatevs.  Near as I can tell, the "blacksmith" pretends to make things and the Greenhouse is only used for guest interactions with people dressed up in period attire.  That's sort of odd, given that this wintery time of year presents a golden opportunity to showcase the benefits of a greenhouse.  I mean, seriously.  Look at the dead garden outside the greenhouse.

Next up was Cobbler, the National Thanksgiving Turkey.  This one makes more sense than the camel.  Cobbler was this year's recipient of the famed (and coveted, in turkey circles) presidential turkey pardon .  Cobbler is very protective of his friend Gobbler, and was none to happy about our sstopping to take photos.  The pair will be on display until January 6th, at which point they will move into a custom-made pen at Mount Vernon's livestock facility.

We then meandered through the gardens of the estate, making our way to Washington's Tomb (site &  materials specified in his will) and the Slave Memorial (designed by students at Howard University).

The remainder of our day was spent walking the trails, where a humorous sign that began "Species Washington Didn't See" in an attempt to explain animal migration instead had me imagining unicorns and dragons, and visiting the museum, where we saw the lower half of Washington's famous wooden teeth and bitterly wondered where the top half ran off to.  An exhibit entitled Hoecakes & Hospitality:  Cooking with Martha Washington provided several recipes that we are dying to try at home, including one for an alcoholic beverage called the Cherry Bounce that Craig and Jo enjoyed over lunch.  The taste I managed to sneak was divine.  Speaking of lunch, The Mount Vernon Inn Restaurant provided us with the most delicious meal I have had since being back in the states.  TJ and I shared a bowl of Virginia Peanut & Chestnut Soup, followed by a Meat & Potato Pye for him and a a Duck and Sausage Cassoulet for me...followed by a shared helping of Homemade Bread Pudding.  My lack of food reviewer training prevents me from describing just how savory this meal was.  Suffice it to say, we will be going back next month, when out-of-town visitors provide an excuse for a return visit.

I'm super excited for this return visit, as my camera died shortly after visiting the tomb and memorial.  I discovered early in the day that my camera battery was low.  Hector wanted to take a picture of a squirrel he saw climbing a tree along the bank of the Potomac, then proceeded to take fifteen (Seriously.  Fifteen.)  photos of various animals' derrieres.  Here's his best one:

TJ's cold had started flaring back up around lunchtime, and after that meal we were all exhausted anyway, so we decided to call it a day.  All in all, it was our most enjoyable excursion since returning to the states and a great start to the many tales I plan on recounting over the next eight months!