Sometimes...not often, but sometimes, I really, really hate the Foreign Service.  Those of you on the outside looking in may see us as a bunch of highly paid pencil pushers that get to live in fancy mansions in faraway lands...in between exotic vacations to Italy and Fiji, of course.

Well, you'd be wrong.  We are actually a bunch of modestly paid pencil pushers that get to live in average-for-Middle-Class-Americans housing that just happens to be in faraway lands...in between giving up any and everything that we hold dear.

We say goodbye to our family and friends.  To favorite restaurants and nightspots.  To old careers that we may or may not have loved.  To houses that we bought barely two years prior and thought we would grow old together in but instead will probably not set foot in for another 20-30 years...if we don't just get bored and sell them off first, of course.

And then, just when you've been at post for a couple of years...just when you've established new friends, new work connections, new local hangouts....you uproot your family and start from scratch all over again.

And sometimes...sometimes this job causes you to lose your best friend.  Your compadre.  Your pretty little girl.  That precious, dopey, flopsy mopsy golden retriever that you bought for you husband in 2007 as a present for his college graduation....but that everyone secretly knew you really bought for yourself.

We knew almost from the beginning of our relationship that TJ had wanted to pursue a career in the US Foreign Service.  It was his dream job, but given the highly competitive nature of the State Department, we put that dream up on the "Wouldn't that be swell?" shelf in the closet.  By the time February 2010 rolled around and we realized we'd need to pull the dream down and dust it off, we had accumulated two dogs, a cat, and a 30-year mortgage.

The house?  No biggie. Slap some paint on the walls, replace the carpet, find a property manager and rent that sucker out.

The pets?  Also no biggie.  Throw them in the car and road trip it on up the highway until you reach Virginia.

Then came the first pet exporting disaster.  After weeks of bureaucratic delays (both Mexican and American) resulted in several thousand dollars beyond our projected shipping expenses being tossed to the wind, the animals all arrived safely, if not a little rattled, in Guadalajara.

Two years later, we tactfully circumvented this issue on our return trip by hiring a driver to escort them to the Texas border, from which we were able to safely and leisurely drive back to Virginia and prepare to start the whole process again.

Almost immediately upon returning to the US, we began to crunch the numbers and realized that, bare minimum, it would cost approximately $3,500 to purchase air fare and get all the critters "up to code" per Israeli import regulations.  That's a hefty chunk of change, though certainly doable.  But...what happens when TJ receives his next posting, and it doesn't require a lengthy stay in DC?  We'd have to fly the pets back to the US for one month of mandatory home leave, and then fly them to our onward assignment.  $3,500 to get them all to Israel suddenly turned into a hypothetical $10,500 round trip experience.  Doable.  But logical?  Feasible?  Maybe not.

Then we took a long, hard look at each of our pets.  They are all getting older.

Other than a bad case of kennel cough-turned-pneumonia in Zelda's infancy, all three pets have lived perfectly healthy lives.  Assuming that continues, Sophie and Zelda are on trajectory to clock out of this mortal realm in the next few years, with Chloe following a short while later.

But stress can effect an animal's health, and all three of them arrived in Mexico looking much worse for wear.  We were hesitant to put any of them through that again.

Then we were assigned to our housing unit in Jerusalem.  It looked...shall we say...much more cozy than our accommodations in Mexico.  It also lacked a yard.   Zelda is a cuddler, but Chloe is a wild beast that loves to run.  We were concerned about a lack of space to keep her entertained.

We had already been considering the possibility of needing to find alternative homes for our furry friends as far back as February 2011.  I just didn't think it would actually happen so soon.

It was important to us that, should any of our pets leave our home, we would continue having access to them.  We began putting feelers out there to see if anyone would want to foster any of them.  Our logic was, if we could find someone we know to take them, we would do that.  If not, we would weather all health and financial risks and bring them along.

Poor Sophie.  Nobody wanted her.  She has apparently developed quite the reputation among our friends over the past decade as an evil demon from Hades.  She's actually quite sweet.  She just likes to hiss at people she doesn't know, and glare at those she does.  Plus, she isn't declawed, so that's a deal breaker for a lot of folks.  One person did offer to take her, but it would have been as an outdoor cat and we know she doesn't have the chutzpah for that.  Due to lack of viable interest by anyone but ourselves, Sophie was coming along.

Zelda would have been welcomed by our old roommate, Kris, and with open arms.  He loves her and we've always suspected that she likes him more than us, anyway.  Timing being what it is, though, he's found himself in a relationship

with someone who has pet allergies.  I suggested they break up, but apparently they're happy.  Oh well.  Another friend committed to taking her, only to back out saying his landlord didn't approve.  I've since seen pictures indicating that he's adopted two puppies, so he's currently on my poop list.  Had he said no at the onset, that would have been fine.  Sadly, he let us down so close to departure time that we had to decide whether it was worth the risk to wait for another bite or to start the lengthy and expensive process of getting vaccinations and genetic testing just in case we had to take her...at which point why not just bring her along?  And so, Zelda joined Sophie as a two-time world traveler.

Then there was Chloe.  She's so beautiful and sweet, who would NOT want her?  The day our friend had falsely committed to taking Zelda, I sent out a Facebook blast asking about Chloe.  Offers immediately poured in.  I decided on Pam, a sweet woman I have known for about eight years from a previous job.  She lives with her granddaughter who is just about to start college.  They have several dogs and a cat already and had previously shared space with a golden retriever, so they knew all about the breed's behavioral patterns (or lack thereof).  Pam graciously offered to foster Chloe while we are overseas and says she will return her upon the completion of this tour.  Pretty sweet deal, huh?  Of course, it was right around this time that our other friend reneged on his offer to take Zelda and I felt like a monster.  You're not supposed to have favorites, but I do.  And Chloe is mine.  I felt like I was abandoning her.

I used what little time I had left with her to the best of my ability.  I know that it is a human flaw to impose human characteristics upon animals, but I wanted Chloe to know that I love her.  Realistically, I'm sure I just needed to make myself recognize that I loved her.  Either way, I took her for extra long walks, bought her more toys than usual, forced everyone to sit for a family portrait and generally just made a point of being more attentive.

The result of which was that I had somehow managed to cry myself out by the time we made a whirlwind weekend trip down to Orlando and handed Chloe over to Pam and her granddaughter, Bailey, on August 3rd.  We knew our car was going to be stuffed when we made our final departure from Virginia at the end of that month, and we wanted to give them all time to adjust to each other before we headed off to the other side of the world and found ourselves unable to make adjustments if needed, so handing her off early seemed like a smart idea.  Pam did a great job of reassuring us that Chloe was in good hands.  They have a huge yard, a doggy door (always wanted one of those!) and toys galore.  I knew our baby would be in good hands.   As we got in the car to leave, Chloe watched curiously from the screen door.  She didn't look sad, nor happy.  It was just sort of a "Those are my daddies.  They are there and I am here," curious kind of look.  Weeks of emotion had left me dry.  I calmly turned to see TJ, who had been bottling it up for weeks so as not to exacerbate my feelings, finally, briefly, lose it.  The drive back to DC was sad, yet oddly happy.  We knew that Chloe would be well cared for.  And that's the important thing, right? 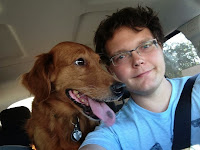 We had the opportunity to spend some time with her during home leave.  I picked her up from Pam's house on the morning of September 10th and she was so excited to see me that she almost knocked me down running out the front door (Chloe, not Pam).  I had claw marks all over me for days from her trying to crawl into my arms!  We didn't do too much that day.  Just lounged around in a big dog pile watching trashy television (Maury) at the hotel, for the most part.  We did want to spend some alone time with her so, leaving Sophie and Zelda in the room, we loaded Chloe in the car and

headed to Celebration, FL.  TJ lived there when we first started dating and we had been been wanting to stop by to reminisce.  We walked to one of our favorite eateries, The Market Street Cafe, and took a seat outside.  We ordered our favorite dishes and a bowl of water was brought for Chloe.  We had never taken her out to eat like this before, and she behaved like an angel.  We were so proud of her!  After lunch we walked around the lake and the downtown area before heading back to the hotel for some more trash television.

Pam wasn't home when we dropped Chloe off, but Bailey was.  Chloe ran to her just as eagerly as she had run to me that morning.

I know she's in good, loving, capable hands.  I just hope those hands are still willing to release her when two years have passed.
Posted by Aaron at 8:50 AM