The Wonderful World of Disney (and Universal, Too!)

If we've learned anything since joining the Foreign Service, it's that the best laid plans of mice and men often go awry.

Case in point:  Our original plan had been to enjoy a nice, relaxing home leave on the West Coast following our two year assignment in Mexico.  We planned it out and it looked like we could spend a month in California, Washington, Vegas, etc. before heading to Virginia for TJ's Arabic training.  The State Department didn't agree, and all of the training came first.  That was fine, no biggie.  The only hiccup was that, were home leave to begin prior to training, we could control where the flight out of Mexico took us (i.e. West Coast), whereas having home leave after training meant we were already situated in Virginia (i.e. East Coast).  We weren't too keen on driving all the way out west, so a new plan was formulated.

...And, there we were.  At last.  A long ten months and eight days after leaving Mexico, we finally arrived in Orlando.  Home.

What follows is basically an episode of any sitcom that ran during ABC's TGIF Friday night programming following the Disney/ABC merger in the mid-90s.  You know the drill:  The Tanner family (or the Foster-Lambert family, or the Winslow family, etc.) goes to Disney World and spends 22 minutes (plus commercials!) getting themselves stuck in a series of hilarious yet troublesome situations that will be resolved the following week (these were typically two-parters) while they float seamlessly between parks as if they are all the same place.

This probably won't be as entertaining as all that, but we did float seamlessly between parks for the duration of our nineteen day trip.

We arrived on August 30th and, after a quick unpack and rest at the hotel, headed to Downtown Disney where we met up with our old roommate Kris.  We walked the full length of this outdoor shopping, dining, and entertainment complex during our chat.  We window shopped.  We stopped for a drink.  I took a picture with this awesome Lego Hulk.  It was nice catching up with Kris, but on the whole the experience was a tad depressing.  Pleasure Island, the section of Downtown Disney that had been devoted to nightclubs and booty shaking, had closed on September 27, 2008.  The Virgin Megastore, where TJ and I met for the first time, closed in spring 2009.  The McDonald's where we shared our first meal later that day because-it's-not-a-date-so-why-be-fancy closed on April 30, 2010, shortly after our original departure to join the Foreign Service.  Now, construction barriers are set up all over the complex, paving the way for something called "Disney Springs" that is scheduled to open in 2016.  I'll try to reserve judgement, but right now I'm just bitter that so many of the locations surrounding the beginnings of our relationship have faded away.

The following day was spent at EPCOT, TJ's favorite of the four theme parks that fall under the Walt Disney World umbrella.  After all but conquering Future World, we set our sites on the World Showcase.  First stop was "Mexico," where we enjoyed Margaritas and nachos, listened to a mariachi band, and replaced Panchito Pistoles and José Carioca as members of The Three Caballeros.  Disney photography policy prevents the taking of pictures with their characters while in the presence of alcohol but make no mistake ladies and gentlemen, those margaritas are sitting just to the side of the far right bottom corner.  We spent the remainder of the day leisurely strolling the World Showcase and sampling foods and beverages as we took in the attractions.

That was followed by a day at Animal Kingdom, which I have always

suspected of being situated directly above hell, due to its ever-uncomfortable, always higher than average temperatures.  Our friend Tommy joined us for a day spent traveling through time to the day of the Dinosaur, learning that it's Tough to be a Bug, embarking on a East African safari and learning all about the "Bear Necessities."  If you don't get all of those references, it's because either you don't know enough about Disney, or I know too much.  And since this is my blog, we'll throw the blame in your direction.  We would see Tommy one more time during this trip, and that would be following Tuesday evening for night of dancing and PBR at downtown Orlando's hipster club, I-Bar.  The crowds were young when we left Orlando, and even more so now.  We, unfortunateley, had aged another three years.   It took a while to get into the groove, but once we did it was fun.  If nothing else, we ended our evening better off than the guy who was sitting outside in a puddle of his own...something...when we left.  Though, looking back, maybe he did have more fun than us.

That evening saw us arriving at Disney's HollywoodStudios for a night of turkey legs and scary fireworks (Really, Disney?  What were you thinking with this whole Fantasmic thing?) with my old friend and colleague Shalinn.  TJ was excited to ride the newly renovated Star Wars attraction (Star Tours - The Adventure Continues) for the first time, which I had managed to do during my 2011 trip to San Diego.  We had planned to meet up with Shalinn, a champion eater who manages to stay super skinny just to spite me, for an evening at a local food truck fair later in our trip, but we were sadly rained out.  Next time, pookie!

The next day was spent at my favorite park The Magic Kingdom.  We immediately headed over to The New Fantasyland to explore a park renovation we had been dying to check out for months now.  Among the pleasant new features was Gaston's Tavern, where I was able to partake in something called Lefou's Brew, a frozen apple juice concoction with a hint of marshmallow, topped with a passion fruit-mango foam.  It was delicious.  This was not to be our final day at The Magic Kingdom...nor was it to be our final Lefou's Brew. 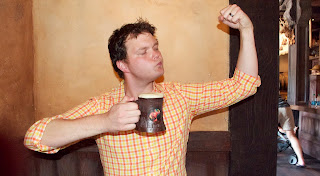 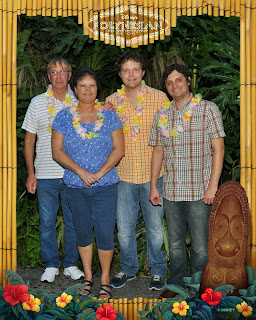 My parents drove down from Texas for a brief visit September 3-5.  In what has become something of a tradition since they started visiting us in Orlando all those years ago, we made sure that they got to experience one of the local dinner shows.  This time around it was Disney's Spirit of Aloha at the Polynesian Resort.  The family-style buffet features hula dancing and a fire-knife performance.  On the second night we went to Kobe Japanese Steakhouse for a teppanyaki-style dining experience TJ and I introduced them to on their last visit, and that they seem bent on turning into a second dining tradition.  Sounds good to me!  Not much in the way of activity to report beyond that.  They weren't keen on visiting the parks ("There's more to life than Disney," I believe mom said....I know, right?  She's totally crazy.), so we did the family thing where you sit and talk and reminisce and sometimes go shopping at Target.  Important things to do, as I'm not quite sure if/when we will be returning to the states, other than the end of our tour in Jerusalem.

While we were at the luau, our car got to hang out with Herbie!

That Saturday I got to meet TJ's sister, brother-in-law, nieces and nephew for the first time.  They had recently moved to Tampa and, thanks to Kris's awesomeness (and employment benefits), we were able to treat them to a day at Universal Studios and Islands of Adventure.  The kids all had a great time, with TJ's nephew happily proclaiming "This is the best vacation ever!"  Indeed, kid.  Please note in the attached photo, the sleeping baby in the fore with all of the "must-be-this-tall-to-ride" graduates happily queued up and ready to go in the background.  We all had a fun-filled day meeting Spider-Man, exploring Hogwarts and going on an adventure with the Autobots.  It was my first time truly doing the theme park experience with kids in tow, and I must say I enjoyed it.  Hopefully I'll be able to do it with a tot or two of my own one day.

The rest of the trip was filled with more of the same.  Further exploring the parks on our own and hanging out with friends when we had the chance.

We met up with Nisrine, another old friend and colleague, for a quick chat at a local wine bar.  It was brief, but so good to see her.

We spent a day with Chloe.

We spent time away from Disney with Kris and his new boo, John.  Brunches, dinners, Insidious Double Features and martinis, oh my!  Oh, and I did make them return to Universal one more time.  Rain and time hadn't permitted proper exploration of the new Springfield environment.  Mission:  Accomplished.  Little known fact:  This is one of maybe four photos of Kris in existence.  I own all of them.  He's the pouty one on the right that doesn't appear to want to have the camera pointed at him.

We had appetizers and drinks with our friend Gavin, during which time a frumpy hag of a waitress named Agatha denied me drink service after declaring that I had a mole on my neck in my driver's license photo that was not currently present on my person.  It was one of those miracle moles that you could scratch off with your fingernail, but she was having none of it.  She made me question basically everything about my life.  Diet, exercise, skin care routine.   Even with a "mole," do I look that drastically different than the person in my 2003 driver's license photo?  Who knows. But now that we are settled in and my new place of employment has a gym, I'll be hitting it hard going forward.  So that's turned a negative into a positive.

We also took some time to visit the gorgeous little craftsman home that we purchased when the Foreign Service was but a future possibility.  The tenants are taking care of the place and have turned it into an adorable little bachelorette pad.  Should we hold on to it, it shall be a wonderful place to retire.

I don't really know how to wrap this up, because doing so is just further confirmation that our all-too short time at home is already over.  But I know we'll be back someday.  And so...