I have had the pleasure of speaking to my parents and several friends in the US over the course of the past week. Everyone asks the same question: “How IS Guadalajara?”

It sounds innocent enough, but in reality, they are asking three separate questions:

Well, let me tell you about Guadalajara.

When we arrived last Monday, we noticed that our apartment, though mostly furnished, lacked a trash can and a laundry basket. What were we to do? Why, go to Wal-Mart Super Center, of course. At that point, I decided to play a game with myself and keep track of how many businesses I could find that would be familiar to a US citizen traveling to Mexico.

I had to stop on Sunday, when the list reached 75. Seventy-five! In less than a week! We were standing in what is probably the nicest mall I have ever seen in my life. There were plenty of non-US options, to be sure, but in my short time in Mexico I had already realized that I would never be in short supply of familiar places to shop, especially at the mall. In fact, it would probably be easier to count the ones that are NOT here (Hello, Target, where are you???). So I decided to stop counting at 75. And then I turned a corner and found five more. 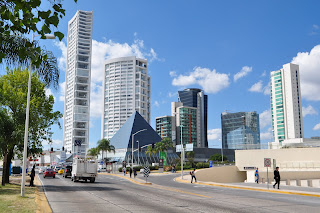 View from the mall...WOW!
The apartment we currently live in is situated directly across the street from a public park. Starting at dawn and continuing beyond nightfall, one can find joggers, food venders, and children playing in the park. Incredibly, it is the type of park one would expect to find in the United States 20-30 years ago. You know...they type kids love and parents are terrified of: crazy-tall slides and the ever-popular, long-banned merry-go-round (-o-death).

Our apartment is one block away from Pastelería Jeffrey, which offers delicious desserts and horribly unreliable wi-fi. Across the street from Jeffrey you will find Oxxo. Oxxo is a convenience store in which can be found pretty much the same stuff that you would find in a similar store in the states, minus the price inflation for the convenience of it all.

One block down and two blocks to the left of Oxxo, there is a Starbucks, which has proven quite useful as we wait for our own Internet service to be set up (which will not occur until our permanent dwelling is available). During the holiday season, focus here is not on Peppermint, Eggnog, and Gingerbread flavored beverages, but rather on Cherry Mochas, Nuevo Caramel Chocolates, and Toffee Nut Lattes (Aaron tried, Aaron approved).

One block down and two blocks to the right of Oxxo, there is a Blockbuster. Whereas brick and mortar video stores in the US face imminent demise thanks to the rise of the digital age, here in Mexico business is booming. Rentals are $3.36 USD ($0.80 USD on Thursdays!). US movies dominate the shelves, and many will play on both US- and Mexico-coded DVD/Blu-Ray players. There are many films and television series that originated in the states that are offered here in different (and more exciting) packaging...and some that aren't offered in the states in any form.

Continue down this same street for about three blocks and you will find yourself facing Soriana Super, the largest grocery chain here in Guadalajara. Many familiar brands can be found here, as well as different iterations of familiar brands (Tuti-Fruti flavored Crush and Lime flavored Act II Popcorn, for example).
So, to answer the first question, yes, I like Guadalajara. Although I have only been here for one week, I have determined that I will be able to explore a new culture while retaining access to most of the comforts of home found in the United States. And everything I need is within walking distance. 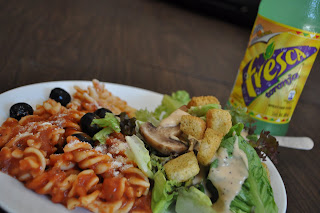 My typical Mexican dinner. Exotic, no?

As for the second question...is Guadalajara dangerous? I don't know how to properly answer that question other than to say...Is New York City dangerous? Is Chicago? How about Washington DC? Sure they are. All major cities are. The key to a happy existence is to respect the terrain. Know your surroundings. Have an understanding of how to best communicate with people. I can't offer a better answer than that, other than to tell you that I have felt completely safe in my travels. I'm not even afraid of our apartment anymore. At this stage in the journey, my biggest fear is that I will fail to bleach the vegetables properly and give TJ a bad case of Montezuma's Revenge. But again, so far, so good.
As for the 3rd question, do I regret this move?

I have a habit of reading other Foreign Service blogs. These blogs often discuss a move to a new location, and sometimes have a “making the best of it” feel to them. I began to worry about this as our departure date drew closer and closer. Would we enjoy Mexico, or simply make the best of it?

Maybe I'm jumping the gun, only being one week into this adventure, but I think I have a decent impression of things.

Foreign Service life requires the willingness to leave your homeland for years at a time. This journey to Mexico has required us to do this very thing...yet we are close enough to home that we can get there quickly if necessary.

Foreign Service life requires the willingness to acclimate to surroundings that may not live up to your current quality of life expectations. Here in Mexico, we've had to pay heed to the water situation. We have to bleach our vegetables and only drink from a designated tap in our kitchen. Minor adjustments that have already become habit but will prepare us for more drastic life changes as TJ's career continues to take us to foreign lands. 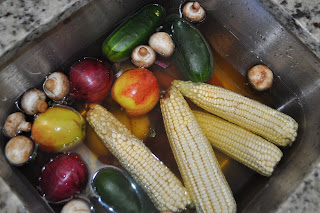 Bleaching fruits and veggies for the week.

Foreign Service life requires the willingness to live in countries with varying exchange rates. Sometimes it works in your favor, sometimes it doesn't. I'd say this time around, it turned out pretty favorably.

Foreign Service life requires the willingness to be separated from your personal effects (and mail) for an extended period of time (stuff travels less quickly than people). Since we are in Mexico, the time of separation will, hopefully, be shorter.

Foreign Service life requires the willingness to live in countries that do not offer the same dining options that you are accustomed to. Given Mexico's proximity to the United States, this has not been an issue. At all. In fact, my biggest fear, not being able to find Dr. Pepper, proved to be in vain. Hooray!

I've always been the type that has seen the grass as being greener on the other side. I don't mean to, but I often have a negative reaction to the present, only to realize how great it was in hindsight. Last night, as we stood in the kitchen preparing dinner together, I confessed something to TJ: “I love our life here.”

How IS Guadalajara? Pretty amazing, actually.